How worry over pomelos changed everything at a Songjiang school 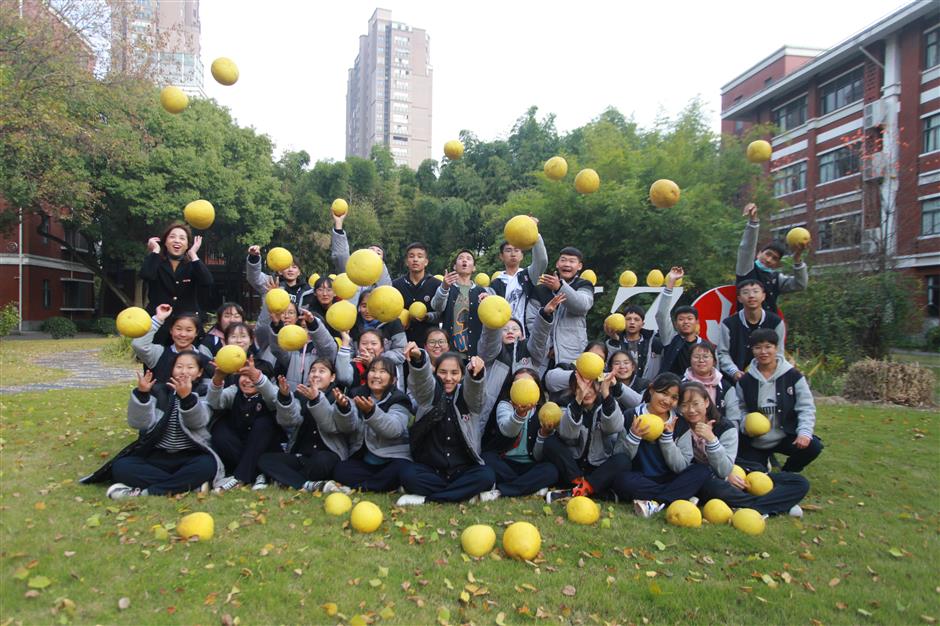 Students and teachers from Songjiang No. 1 High School cheerily throw the pomelos they have picked high into the air. The school celebrated its 10th pomelo picking festival recently.

A campus renovation at Songjiang No. 1 High School added about 40 pomelo trees to its sidewalk trees more than a decade ago. As the trees developed and flourished, teachers were feeling worried as students couldn’t help climbing the trees and picking pomelos at each pomelo season.

If the pomelos were so enticing, why not allow the students to pick them above board?

So a pomelo picking festival with the romantic name “An Encounter Under a Pomelo Tree” has been held in the school for 10 years. 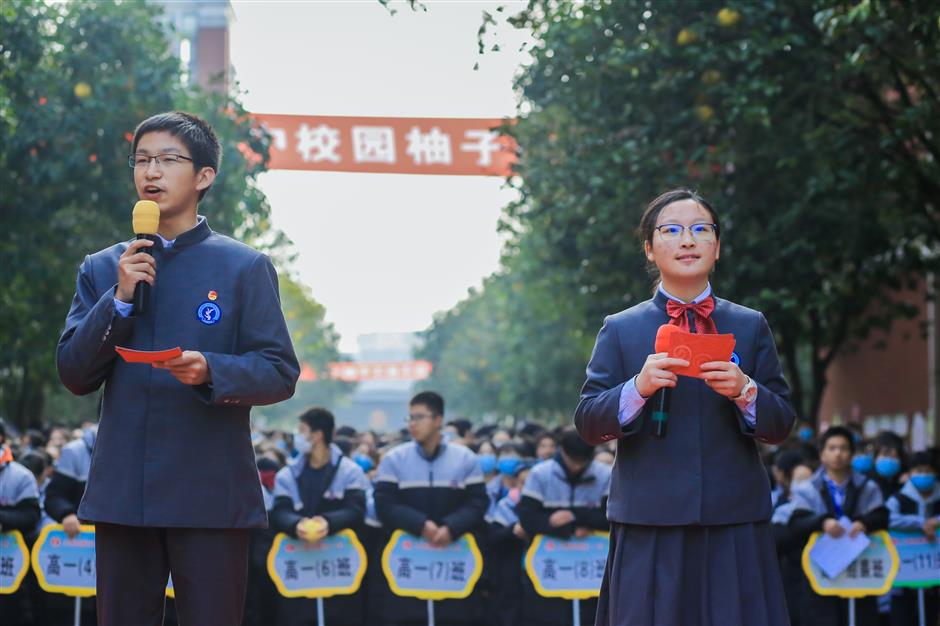 At each pomelo season, pomelos hanging heavy on branches become a unique sight at the school. Students and teachers walk below the shade of the trees, pick pomelos, juice pomelos to make pomelo tea or make the fruit into a variety of interesting handicrafts.

In the pomelo picking festival in the winter of 2020, while students were busy picking pomelos, teachers of various subjects joined in to offer their expertise.

Students were guided to compose poems or deliver speeches on pomelos. They did acidity tests on pomelo juice, made pomelo soap by hand and tested the nutrient composition of the fruit.

Students also gave full rein to their imagination to create pomelo-related cultural products, including essential oils and bookmarks made of the leaves. 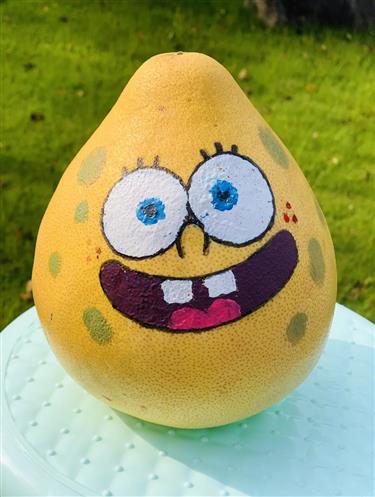 The pomelos, after being picked, were weighed and judged which was the heaviest and which was the lightest. The picker who had the heaviest pomelo was made the festival’s “Pomelo King,” while the one who had the lightest was awarded the title of “Pomelo Elf.” Both the Pomelo King and the Pomelo Elf would be given the honor of picking the first pomelo at next year’s festival with the school’s headmaster.

Students also painted pomelo cartoons on the ground at the school. Under a “blessing tree,” students from the first grade wrote their blessings on pomelos, sent them to their seniors in third grade and wished them good luck during the college entrance examination in the summer of 2021.

During a pomelo sports event, students ran relay races with pomelos as relay batons, played field hockey using a pomelo as a ball, and a group bounced a pomelo on a drum while holding strings attached on the drum. 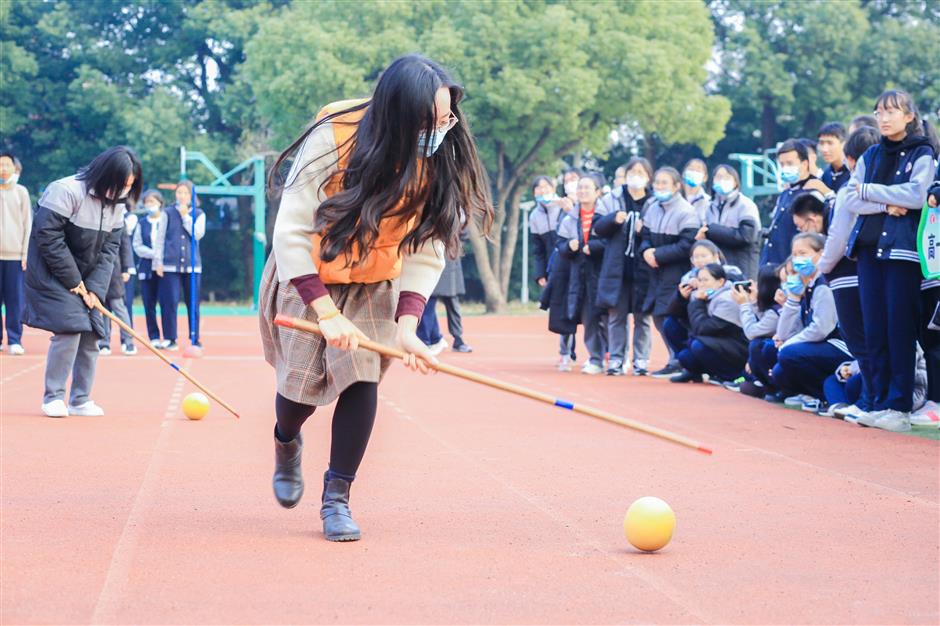 Students play field hockey using a pomelo as a ball. 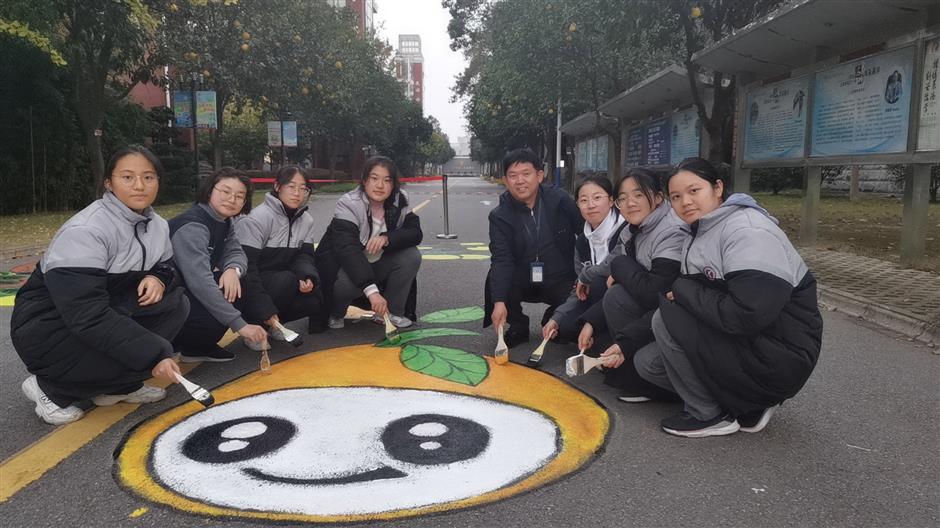 Students paint graffiti in the shape of a pomelo on the ground.

The pomelo trees, which used to be a safety hazard at the school, have now become a source of joy during the annual “carnival.” Planned and managed by Zhang Chunyan, vice president in charge of moral education at the school, the 10th pomelo picking festival was as fun as it used to be, and included plenty of more innovative cultural, art and scientific activities.

Guo Ningwei, a vice president of the high school and the person who first came up with the idea of a pomelo picking festival, recalled how the festival came into being.

During an evening self-study class a decade ago, Guo, who was on duty in the classroom, heard something sizzling outdoors. He walked out and saw the shadows of four human figures below a pomelo tree. The four students were using a stick trying to poke down some pomelos.

Guo stopped them and invited them to his office to give them some education. At the end of it, one student whispered: “You don’t know how tasty the pomelos are.”

The words touched Guo. Why not allow the students to pick the tasty pomelos happily without any concern? 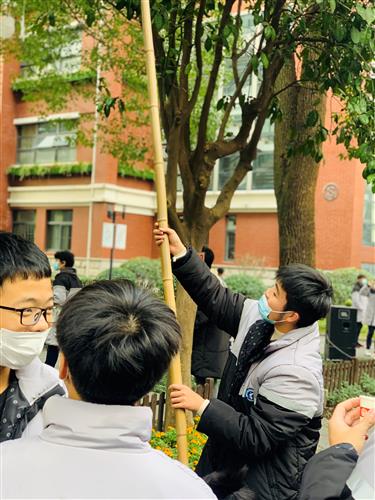 Students use sticks to poke pomelos from the trees.

“Simple and crude criticism only causes misunderstanding, and only sincere communication can promote friendship between a teacher and his students. Moral education shouldn’t be pedagogic. Why not allow it to be a bit poetic and touching?” said Guo, who, at that moment, came up with the idea of holding the annual pomelo picking festival.

Since the launch of the festival, students would no longer secretly steal pomelos any more, and Guo earned a nickname — “Papa Pomelo” — among his students.

A blank wall at the campus was suggested by students for them to paint graffiti on it, and this was later approved. Manhole covers behind the chemistry experiment building were also painted with graffiti to wish seniors good luck for the college entrance exam.

Now, it’s common among graduates from Songjiang No. 1 High School to say to each other: “I will wait and meet you under the pomelo trees.” The exchange of words has become a code among the graduates that bears their gratitude to their alma mater.