The Global Search for Education: Director Barb Hoffman on Finding the Keys for Inspiration 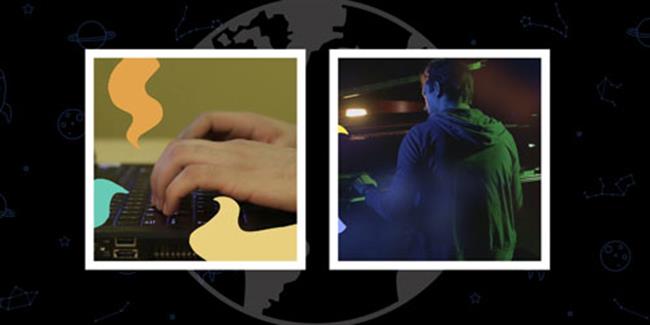 Schoolwork is important but what happens when you're stuck in the library with a 3000 word essay due in a few hours and you're both frustrated and not sure how to begin.

Audiences can screen Barb Hoffman's short film, Keys, curated by NFFTY, for the Planet Classroom Network YouTube Channel this month. The short film tells the story of a young man attempting to write an essay, but as he types on the keys of his laptop, he finds himself playing the keys of a piano. In a delightfully clever and lighthearted way, Keys explores a place most of us can relate to and offers a unique take on how to cherish the moment.

The Global Search for Education is pleased to welcome Director Barb Hoffman.

Barb, what inspired you to make this short film? Was it based on a personal experience?

Yes, this was based on a personal experience. I actually got the idea while I was in the library writing an essay, thankfully a few days before it was due and not just a mere hour. I believe I was listening to classical piano music to help me focus, and was finding little to no inspiration for my writing. So out of boredom, I just started typing the keys of my keyboard to the melody of the music. Then I thought to myself, "Wow, I'm surprised I've never seen a film that made a joke about the connection of a computer keyboard to a piano keyboard." And then naturally, I procrastinated on my essay even more by daydreaming what that type of film would look like, which is how the idea came to be.

How did you decide on what kind of music the protagonist should play? Was the actor improvising?

I was really lucky to have been connected to the extremely talented pianist, Andrew Held, who attended the Berklee College of music. It felt somewhat like serendipity, because I was looking for a jazzy piece that would sound as if it was played impromptu, and Andrew's especially was exactly doing that. So what I did was I had him send me 3 different versions of an improv piece, we chose the one we liked best, and then we had our wonderful actor, Adrian Padilla, listen to the music as he acted out playing on the keyboard.

We like your use of mixed media. Could you speak a little about your creative process, why you chose to use certain effects and how you believe they enhance the storytelling?

Well, my inspiration to use both 2D animation and live action came from the movie Ratatouille. I loved how they were able to convey tastes through visuals, and I wanted to try out a similar concept for my film, where the sounds of the keyboard were visualized through animations. The creative process for this was once the entire film was shot and edited, I went in afterwards to animate the little squiggles you see on screen to the notes being played. We decided that the best way to do this was by shooting and editing the entire film, and once it was in picture lock, I went in with Adobe Animate and drew on all the scribbles that you see on screen to the notes of the music.

How did you decide to end the film with the gibberish paper? Did you always have that ending in mind when coming up with the idea for Keys?

I think the plan was always to have the ending paper be gibberish, ever since I was in the library typing to the melody of piano music. It just wouldn't have made sense to me to have a perfectly written essay appear at the end of the film. It would've been an unrealistic representation to have essays look that easy and fun to write! I wanted to convey that, sometimes even in moments of chaos, it's important to get swept up in the moment and daydream to just write a little gibberish.

What advice do you have for all those who can relate to the main character's problem?

First of all, I would give yourself more than an hour to write a 3000 word essay if possible. But more importantly, I would try not to worry so much about essays and assignments if you can. I think I made this film as a reaction to my frustration with how much time I had spent on assignments and essays over my life. Schoolwork is important, but so is being in the moment, and experiencing your life. And I think that's the point of this film really. Because when you look back on life, you are most likely not going to remember the essays you wrote or the assignments you turned in, but the moments you experienced and lived. So of course, don't throw caution to the wind and never try, but just remember your productivity doesn't define your worth.

﻿
Special Reports
﻿
61815
,
The Global Search for Education: Director Barb Hoffman on Finding the Keys for Inspiration
Technology changing face of modern education
New campus of CAA welcomes first students
The Global Search for Education: Producer and Creator of Apples and Oranges Discuss Teaching Acceptance in a Polarized World
Kids' lab exposes children to chemistry's important role
News reading helps to motivate kids to be a good global citizen
Both excitement and challenges lying ahead
Special ed students communicate through art
It's vital to teach kids wellbeing early on
The young 'chicks' who have no time to kill
EXPLORE SHINE