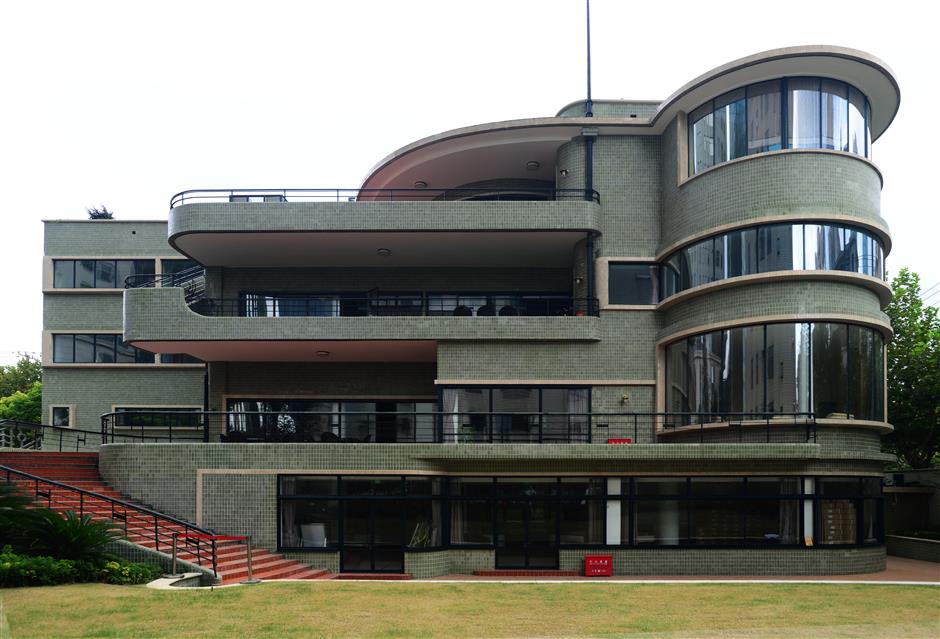 The Green House nicknamed from the green-colored glazed tiles on the facade and surrounding walls is a Hudec design and technologically advanced from inside out.

Imagine you are a wealthy young man who has a wife, a concubine and some land in downtown Shanghai. What kind of dream house would you build?

In the 1930s, Chinese tycoon D.V. Woo commissioned architect Laszlo Hudec to build his dream home on the corner of Hardoon Road (today’s Tongren Road) and Avenue Road (today’s Beijing Road W.). It was a modern villa that became known as the “Green House” that was regarded as one of the largest and most luxurious residences in the Far East.

“Shanghai is filled with old garden residences, but only a few of them are modern buildings with creative designs and a high level of completeness in construction. And even fewer of those have that East-meets-West feel synonymous with Shanghai,” she says. It was another signature work for Hudec following the huge success of the Park Hotel and the Grand Theater. Meanwhile, the commission also helped his company make it through the uneasy late 1930s. 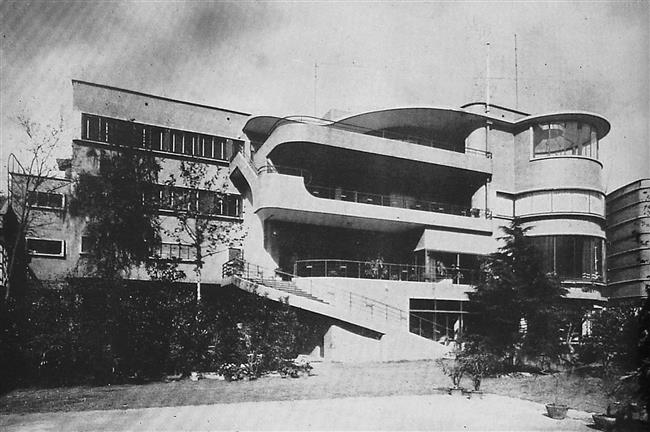 The house owned by Chinese tycoon D.V. Woo in the 1930s was once regarded as one of the largest and most luxurious residences in the Far East.

Green as the lucky color

The house has been restored over the past three years. It has its original color and parts of it may open to the public.

The house’s nickname comes from the green-colored glazed tiles on the fa?ade and surrounding walls. Woo chose green because he made his first “bucket of gold” from selling green pigments for military use. He regarded green as his lucky color.

In 1927, Woo married the youngest daughter of Suzhou tycoon Bei Runsheng, who gave the land to him as a dowry. The gift was meaningful because the two roads’ Chinese names, Hatong and Aiwenyi, contained Woo’s given name, “Tongwen.”

“From then on Woo’s fate was kind of locked to this special plot,” says Hua, adding the address, 333 Hardoon Road, measured precisely 3.33 mu (around 2,221 square meters).

In 1935, Woo was barely 30 but he enjoyed an affluent life with a wife, a mistress and a bunch of children. Thus it was a difficult task for Hudec since the new home needed to house a big family and the plot was oddly shaped and not that large.

Woo’s family had somewhat of a Western lifestyle. In his leisure time, Woo enjoyed playing billiards and hosting dance parties. He also drank coffee, which was unusual among Chinese at the time.

Hudec designed the house from inside out and made it technologically advanced, including the city’s first elevator in a private villa, to suit the Woo family.

Hudec’s career peaked after the grand opening of the Park Hotel on December 1, 1934. He began receiving commissions for skyscrapers one after another due to the hotel’s popularity.

But soon Shanghai’s economy was dragged down by the 1935 international silver crisis and building came to a halt almost completely in the city. In family letters, Hudec complained about the empty waiting room in his office, where people once queued up to talk to him.

The Green House was the only noteworthy commission he received after 1935 and Hudec was not even able to cover the cost of maintaining his office. However, more free time allowed the architect to revise the design again and again to make the Green House perfect.

Hua says Hudec’s situation mirrored that of famous American architect Frank Lloyd Wright, who designed the legendary Falling Water House, which is above a waterfall, for tycoon Edgar Kaufmann in southwestern Pennsylvania around the same time. Both projects were designed for a wealthy owner and both architects were enduring tough times, the professor says.

“Hudec had no big projects while Wright in his professional bottleneck was aging and soaked in lawsuits. So both of them went all out to make a hit and make the world look at them differently,” she says.

After nearly a year of design revisions, construction of the Green House kicked off in November 1935. It was completed in 1938. Hudec’s solution for housing such a big, influential family was a 4-story residence showcasing the essence of organic architecture.

The building features acute angles and a concise layout, which merges nicely with the base.

“Woo certainly chose the right man. Hudec was so good at designing with limited space. He was like a talented tailor who could make a suit out of an irregular cut of cloth,” Hua says, chuckling. 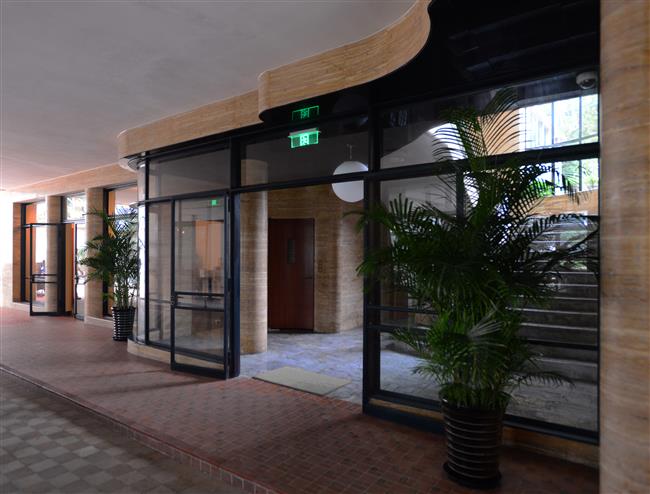 One of the building’s unique features is the driveway/garage that is built into the ground floor.

A mix of East and West

One of the building’s unique features is the driveway/garage that is built into the ground floor. Woo and his family could use this practical feature to go from house to car without getting wet in the rain. It also saved space, allowing the family to have a bigger garden.

Hudec also divided the building into two parts according to functions. The Western-style space included a bar, billiard room and dining room. The main bedrooms faced an open garden. The Chinese sitting hall, ancestral room and servants’ room were on the northern side and featured a more closed style.

The southern facade is stylish. The cylinder-shaped sun parlor is four floors high. Each floor has a balcony with smooth curves. The size of each balcony decreases on each successive floor. The cast iron patterns on the staircase and balcony are in Art Deco style. The sun parlor is made with imported curved glass. Even the glass door is curved.

The interior is luxuriously embellished. It’s not very large, but it’s like a delicate labyrinth, with so many curves, rotating doors and smooth architectural details.

The dance hall has spring floors. The villa is installed with gas supply, while the bathrooms have cooling and heating systems. An elevator with a lotus leaf shape was the first to be installed in a private residence in Shanghai.

Architect Zhang Ming, 85, who had restored Hudec’s Grand Theater and Moore Memorial Hall, remembers the house when she visited it nearly half a century ago.

“The curved windows looked so nice,” Zhang says. “Inside, it was a dressing room for one of Woo’s daughters, as far as I remember.

“The ancestral hall, the small elevator and the staircase were all so refined. All the Italian travertine on the walls had been all carefully selected, with clear and uninterrupted curved patterns, very beautiful.”

In 1939, Hungarian architectural magazine Teres Forma (Space and Form) wrote, “The building is apparently a peculiar mix of the Far Eastern and European or American way of life. It contains all that is required by the Chinese lifestyle, from the ancestral hall to several family suites and it has — of course set apart from these — a bar for cocktail parties.”

Famous translator Qian Shaochang remembers attending parties in the Green House. At the age of 17 in 1948, he was often invited to weekend dance parties by his classmate Li Qiwen, who was close friends with Woo’s youngest son.

“The Green House had a sumptuous round-shaped dancing hall with sprung floors,” Qian recalls. “The party had around 10 people including Woo’s family. I didn’t know how to dance but Woo’s concubine was very nice and she was the best dancer. She always taught me step by step until I grasped Waltz, Blues and Rumba. After that I finally had the courage to invite Woo’s daughters to dance!”

Professor Hua says this combination of Chinese and Western spaces in the same home makes the Green House unique. “The most interesting part is considering the complications and contradictions of Chinese elites living in a metropolis like Shanghai in the 1930s and 40s. Hudec obviously had a deep understanding of Shanghai’s social scene.”

Perhaps the 1939 Hungarian magazine explained it best: “How much today’s Oriental people long for the Western lifestyle, while also clinging to their own ancient mode of living. They cannot let go either of the old or the new, which both have their own value; thus, a unique merging of East and West comes into being ... We believe (the architect) has superbly got right what today’s Chinese need and thus satisfied the wishes of his client ... To those with any idea about today’s China and today’s Chinese this monumental family house will come across as a highly accurate expression of the people of this remote country.”

The words are so profound that they still apply today, much like the Green House remains relevant. 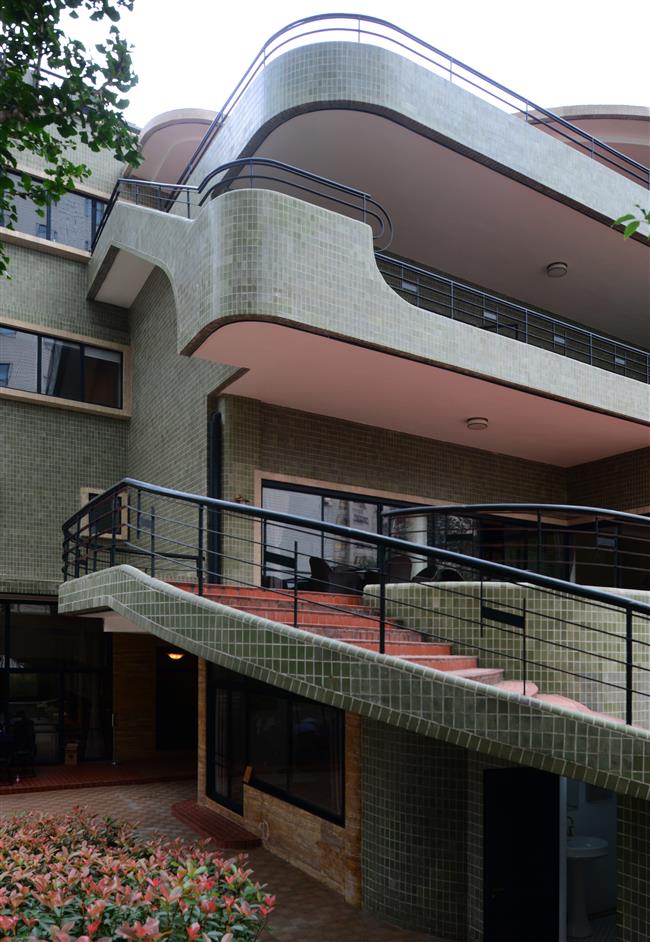 Each floor of the building has a balcony with smooth curves.

Tips: The fa?ade can be seen from Tongren Road and Beijing Road W. It has not yet been announced when it will be open to the public.