The gold that lies beneath your feet 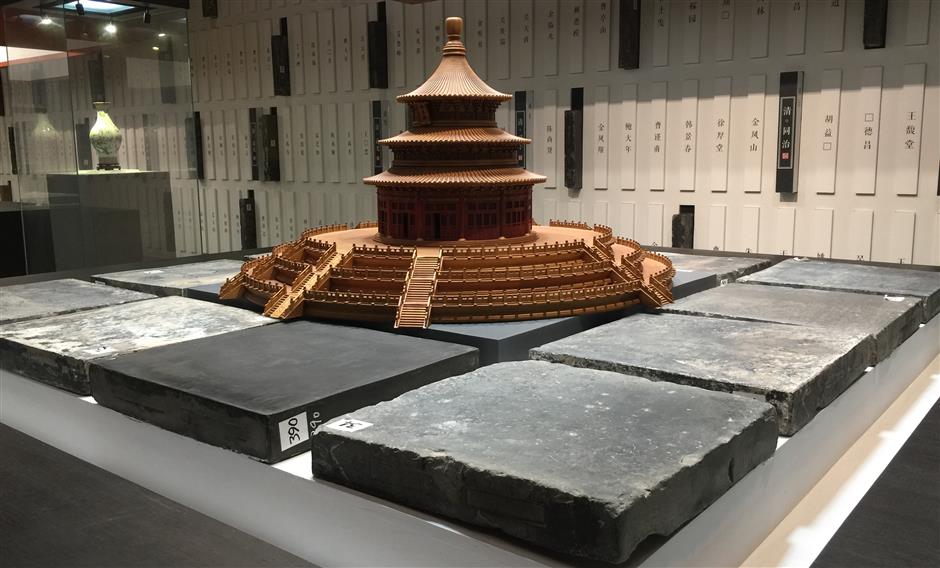 On the floors of Chinese palaces, tiles that have been trodden on by millions are called jinzhuan, literally “gold bricks.” They’re not gold but clay. However, the cost is astronomical — around one tael of silver in ancient China and 26,000 yuan (US$4,050) for just one piece today.

These hidden gems can be found in the halls on the central axis of the Forbidden City, such as Hall of Supreme Harmony, Hall of Central Harmony and Hall of Preserving Harmony, which are known as the “Three Great Halls of the Outer Court.” Used exclusively to build imperial palaces, these bricks were transported to Beijing from Suzhou and thus called jingzhuan. Jing is the abbreviation for Beijing.

It finally evolved to gold bricks mainly because of its high cost and metallic sound.

“First appearing during the reign of Emperor Yongle in the Ming Dynasty (1368-1644), the gold bricks were so treasured that only emperors were privileged to use them to decorate palaces,” says Sun Jian, deputy director of the department of cultural and creative development at Suzhou Lumu Imperial Kiln Gold Bricks Factory.

“People should not belittle jinzhuan. Just imagine how many famous historical figures once kneeled on them. From clay to something exclusively used by emperors, jinzhuan embody the wisdom of the ancients and are witnesses to history,” says Shen Quannan, assistant curator at Suzhou Museum of Imperial Kiln Bricks.

Designed by architect Liu Jiakun, the museum has over 1,400 ancient gold bricks and houses several sites of ancient imperial kilns.

Knocking on the bricks produces a metallic sound, one of the characteristics of jinzhuan, along with their pure cyan color and high quality. There are mainly three sizes of the square bricks — 54.4cm, 64cm and 70.4cm.

“Though the bricks are just tiles, the beauty of them lies within. If you look at the cross section, the structure is so solid and fine that pores can hardly be seen,” says Jin Jin, a state-level inheritor of making jinzhuan and owner of the factory. “The manufacturing process is extremely time-consuming. Only by enduring loneliness can a craftsman make a perfect gold brick.”

Making one piece of jinzhuan can take two to three years and involves a total of 29 procedures.

The first step is carefully selecting the soil, which is the sole material of making gold bricks. Only that in Xiangcheng District of Suzhou can be used to make the smooth and shiny bricks because the soil there is iron-rich.

“Nowadays, the earth is mainly purchased from construction sites in the area. The soil resource that the factory has collected is enough to maintain the production of jinzhuan for further 20 to 30 years,” Sun says.

However, the resource will finally be used up one day. Anticipating the potential problem, the Palace Museum in Beijing has required bricks from Jin’s factory be stored for future use.

“Making gold bricks is closely related to the solar terms. In ancient China, people dug the earth in winter which was the slack season. The first 13 steps need to be finished before the coming of plum rain season,” explains Sun. 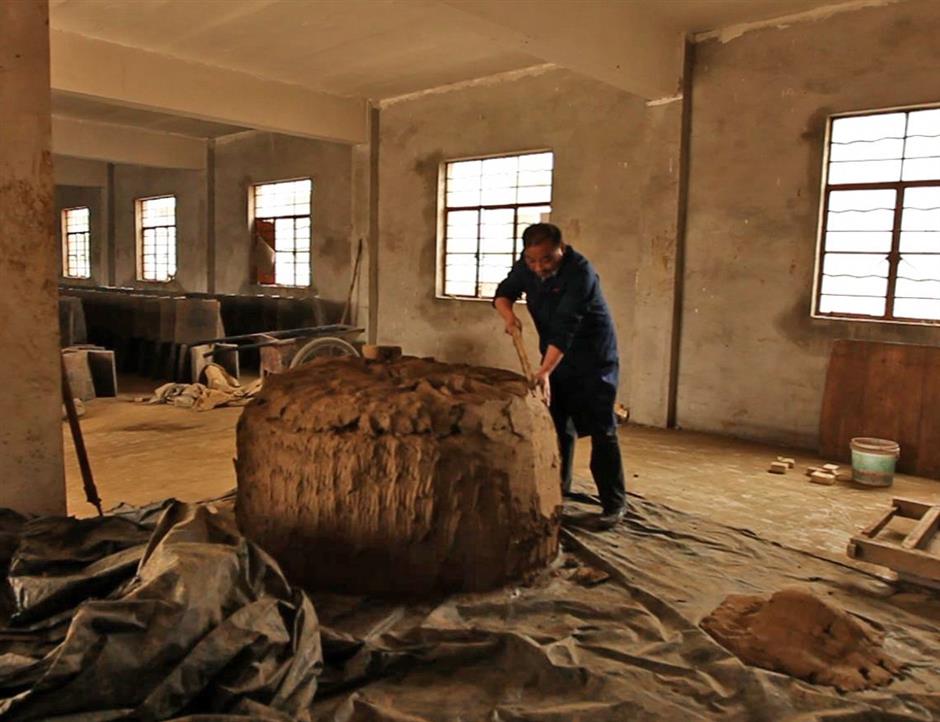 A craftsman prepares the clay to make gold bricks. 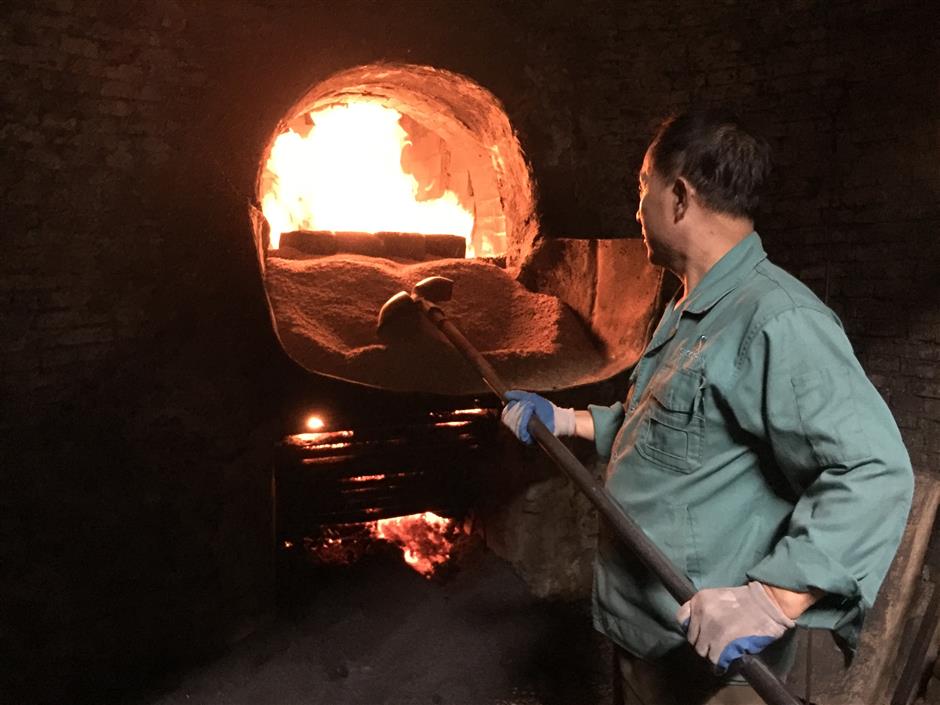 A worker feeds chaff into the kiln where gold bricks are being fired.

The next stage involves 10 procedures, including making a wooden mold.

The clay becomes harder after being kept in a shady place for five to eight months. During the time, it should be flipped over every day and the information such as the time, the size, the supervisor and the name of the kiln need to be engraved on a side of a brick.

Firing is the most significant phase of the whole process, starting in autumn and lasting for 130 days. The base will be fumigated with rice chaff for a month, burnt with firewood for another month, straw for the third month and pine wood for 40 days.

“There is a strict rule when arranging the bricks in the kiln. The layout of bricks should look like the Chinese character ren (人), or human. Piling one above another, there are seven layers of bricks in total. Not only gold bricks but also normal bricks are fired in the kiln together, as those near the fire and on the bottom are easily charred,” says Sun.

The last step is pouring water from the top of the kiln. Due to the high temperature, the water is soon vaporized. The bricks turn into a unique blue-gray hue after cooling.

Unfortunately, a majority of gold bricks have to be abandoned because they are not perfect — either having cracks or broken corners, or the sound they make when knocked is not clear and metallic.

The layout of bricks should look like the Chinese character ren (人), or human.

The traditional method of making gold bricks once disappeared but was revived by Jin and her colleagues. From 2008, they kept trying before the technique was finally approved by the Palace Museum in 2015 after researchers compared ancient gold bricks with those produced at Jin’s factory in hardness, density, water absorption and other physical properties.

“I was a Chinese teacher before being an inheritor of this skill. In 2006, when my father (also an inheritor) asked me whether I wanted to take over his job, I refused as I knew it would be very hard, dirty and tiring, especially for girls. Two years later, he asked me again and I agreed because if I didn’t do so, the skill would have been lost,” says Jin.

Unlike other artifacts, gold bricks can’t be made by one person but rather a group of people due to the tedious manufacturing process. Jin says the inheritance of the skill shall focus on teamwork.

Instead of being used as floor tiles, gold bricks nowadays become a decoration or a board where people can play chess and practice calligraphy. 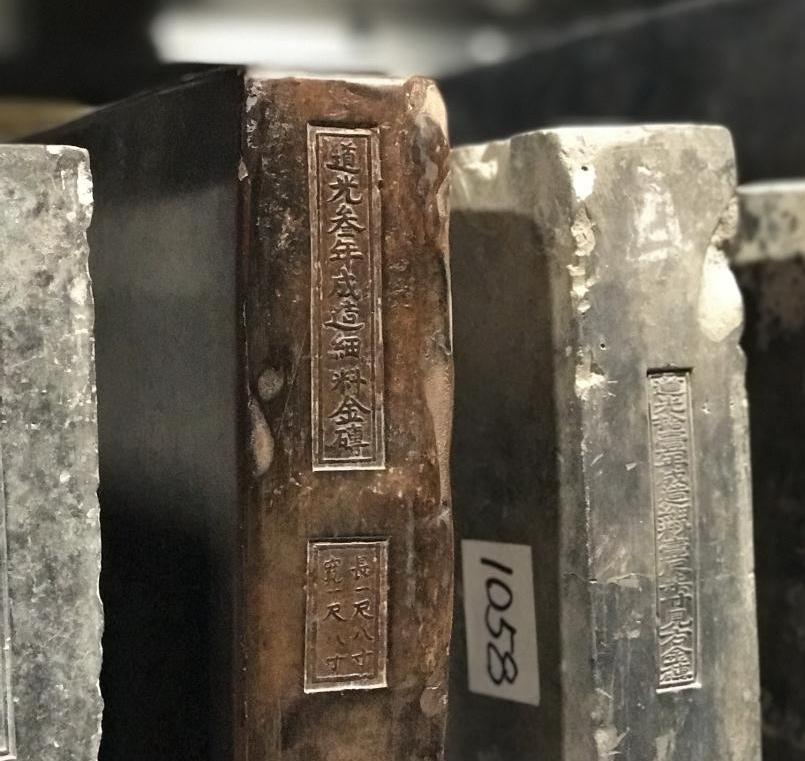 Information about the time, the size, the supervisor and the name of the kiln needed to be engraved on a side of a gold brick.