Sir Simon Rattle, with his signature white mop of hair, returned to Shanghai as he had promised the city on his last visit two years ago. He had visited the metropolis several times in the past 20 years, most often as principal conductor of Berlin Philharmonic.

This time, he has returned for the first time since he took over London Symphony Orchestra, amidst their first Asia tour, with piano maestro Emanuel Ax on Brahms’s notoriously difficult Piano Concert No. 2 in B-flat major, Op. 83.

“All my visits here happened this century. It is fascinating for us because we see the change, how everything changes,” he told Shanghai Daily shortly before taking the stage. “The rate of learning in this country is almost hilarious. In the Chinese mainland, I felt in that time how much the audience had changed, and how wonderful this is for the future of music.”

Classical music students and its fan base have increased dramatically since his first visit, when the city was passionate about the rare performance. Shanghai has been growing into a classical music key spot in China, not only proven by the various new venues, the increasing visits of top orchestras and bands around the world, but also the city’s own proud orchestras and musicians who had made it on the world stage.

The passion for the conductor and music director remains. Tickets were sold out weeks ago, within three days — many local fans had waited long to see his collaboration with the orchestra from his hometown, especially after learning about the changes he had overtaken since his “homecoming” was announced in 2015.

They are also curious about his future plans in China.

His father had business with China, spent lots of time in Hong Kong and also lived in Shanghai for a while. But the China he saw on the first visit was nothing like the China of his father, not to mention the China of today.

“This is a country, once they decide to do something, they are determined to do it properly, we noticed that,” he said. “This is a whole new area for everybody, and already we see an increasing number of great Chinese musicians.”

He had collaborated with some of the best Chinese pianists, including years of collaboration with Lang Lang and recently with Yuja Wang, of which he called “wonderful.”

“I love these two people very much,” he said. “They are utterly different, but both very important.”

Rattle, famous not only musically but also for his outreach programs in Berlin and London, which extends classical music to a larger audience. It brings in amateurs and young musicians and gives him an opportunity to eye the next generation of Chinese musicians.

“I find this a very exciting idea,” he said. “I am sure both sides will get a lot from this.”

The visionary conductor, now 64, is one of the few who can put classical music on the front pages, such as when he became Britain’s youngest music director at the age of 25 and went on to move the City of Birmingham Symphony into a new concert hall and put the provincial orchestra on the classical music map.

He was later said to be Britain’s finest classical music export, heading Berlin Philharmonic, widely seen as the best in the world, for 16 years. With deep tradition and roots, the philharmonic’s members once told the media they opted for change when they chose Rattle.

The relationship was not without tension or controversy at times, but no one could argue the orchestra had become younger with a broadened repertoire and more outreach to the communities in Rattle’s tenure.

Contemporary music, which Rattle often championed, was brought into the repertoire more frequently, proven by more than 40 world premieres. A digital music hall that webcast concerts with live interviews taking questions from netizens was set up, the first in the world. He also held concerts for refugees and their helpers, brought in amateurs from 10 to 101 years old for open concerts and established education department at Berlin Philharmonic.

After returning to the UK, Rattle continued his passion for outreach, with open concerts and a new program “Half Six Fix,” a 60-minute concert with first-hand insight from the conductor at 6:30pm.

He also campaigned for a new concert hall in London and a new home for the London Symphony Orchestra, making the case that the city lacked a world-class concert hall. The designs were revealed earlier this year, while the orchestra is raising funds from all private donations.

Usually outspoken, Rattle had been rather diplomatic whenever asked to compare the two orchestras, once famously comparing in terms of wine.

“I’m about to change my fantastic red wine of Berlin Philharmonic to an equally great white wine of the London Symphony,” he said.

In Shanghai, initially he said he had been bored to answer this question that had been raised by every journalist, but later followed with an answer.

“They are two great orchestras,” he said.

“I find that very attractive. There is nothing they won’t try in all kinds of music. This is a wonderful thing about the musicians.” 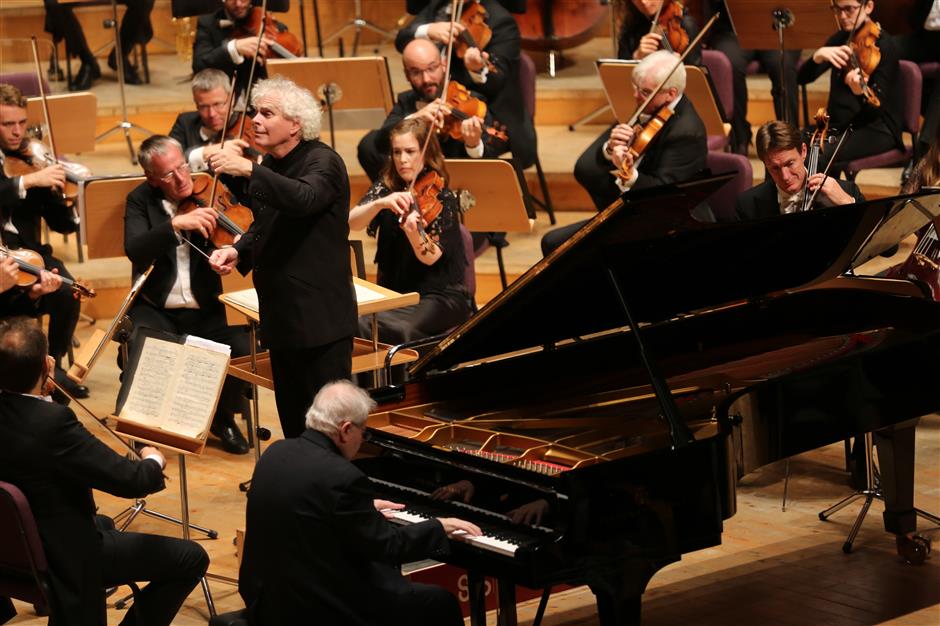 Sir Simon Rattle has returned to Shanghai for the first time since he took over London Symphony Orchestra.