Visitors take a look at the calligraphy works on display at the exhibition “Writing and Non-writing,” where 82 artists from home and abroad showcase the possibilities of this ancient art in various media.

Chinese calligraphy is not just an ancient art with rigid rules. It can be modern and reflect an avant-garde spirit.

Its contemporary side is now on display at the exhibition “Writing and Non-writing,” part of the Hangzhou International Modern Calligraphy Festival, which runs through October 24.

This festival was initiated by the China Academy of Art in 2005, and held every five years. This year, 82 artists from home and abroad showcase the possibilities of this ancient art in various media.

“Hangzhou is famous for preserving the culture of calligraphy, and the festival is a calling card for the city in the field of art,” said Wang Dongling, curator of the exhibition.

“This year, the theme is ‘Preserving Tradition, Innovating Tradition.’ Without innovation, the ancient art would lack creativity and modern spirit. Without preservation, calligraphy may develop in an incorrect direction.”

The history of Chinese calligraphy can be traced back to 400 BC. It is generally distinguished from other art forms by its emphasis on motion and its reflection of dynamic daily life.

Highlights of the exhibition include masterpieces from leading calligraphers from the late 19th century. Some of these works were brought to the light for the first time.

A piece of calligraphy work by Wang Guowei

Wang Guowei’s work is particularly captivating. He was a prominent scholar of Chinese literature in the late Qing Dynasty (1644-1911) and early Republic of China (1912-1949). His work is written on a fan.

Centuries ago, fans were associated with literati. Ink-wash paintings and calligraphy on fans were long considered fashionable. Artists had to adjust the layout of their characters to accommodate the shapes of the fans.

As the exhibition focuses on innovation, visitors can see how artists merge calligraphy into modern life and other cultures.

A striking example is a Catalan-language calligraphy created by Xu Bing, a major figure in Chinese New Wave art during the late 1980s. The artist has invented his own square-shaped characters by transforming Catalonia letters into Chinese characters and combining these letter-strokes with new characters.

Zong Xusheng’s work is made up of lines of QR codes plastered on traditional rice paper, which reveals the influence of digital technology on this antiqued art.

Date: Through October 24, closed on Mondays

A piece of calligraphy work by Wu Guanzhong 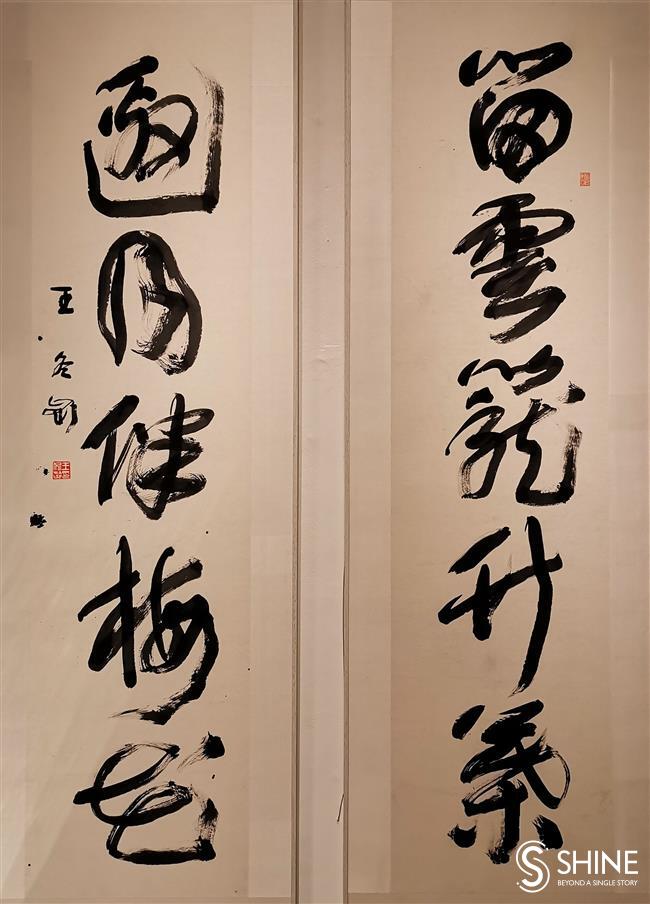