Time, in the work of French artist Cyprien Gaillard, is anything but linear.

On display at TANK Shanghai, the exhibition “Ocean II Ocean” brings together both the artist’s iconic creations and his latest works.

Born in 1980 in Paris, Gaillard studied in Lausanne, Switzerland, and now lives and works in Berlin and New York. As with much of Gaillard’s work, his latest film “Ocean II Ocean” connects disparate, evocative references into a concerto of images, sound and movement. Sequences that the artist filmed in aging metro stations in the former Soviet Union are interspersed with found footage of New York MTA subway cars being dumped into the ocean, destined to become substrate for future reefs. The film’s pulsating, carnivalesque soundtrack is constructed from samples of compositions played on steel oil barrels.

The unique architecture of TANK Shanghai, a network of oil tankards on the former grounds of the city’s airport, supplying fuel for its planes, provides a powerful setting for, and link between, the film’s sound component and the previous life of TANK Shanghai as massive kerosene containers.

Another of his recent works, “L’Ange du Foyer” (The Angel of the Home), shows a hologram moving ecstatically to the gentle whir of an LED fan. Its dynamic figure is modelled after the fantastical being in Max Ernst’s 1937 surrealist painting of a similar name. Later described by Ernst as a premonition of the destruction across Europe during Word War II, the twisting angel can be seen both as a symbol of blind destructive force and as a tormented dancer.

The figure, which remains still in the painting, but comes alive in the hologram, is caught in a continuous loop, forced again and again to be reborn. Informed by cyclical thinking, the angel-creature in its repetitive dance can be seen as an analogy to human destruction and its self-destructive capacity.

Also on display in the exhibition is Gaillard’s iconic series of excavator heads. First shown in 2013 in New York, the installation is composed of excavator shovels, removed from their conventional setting, juxtaposed with large gold-colored stone rods. 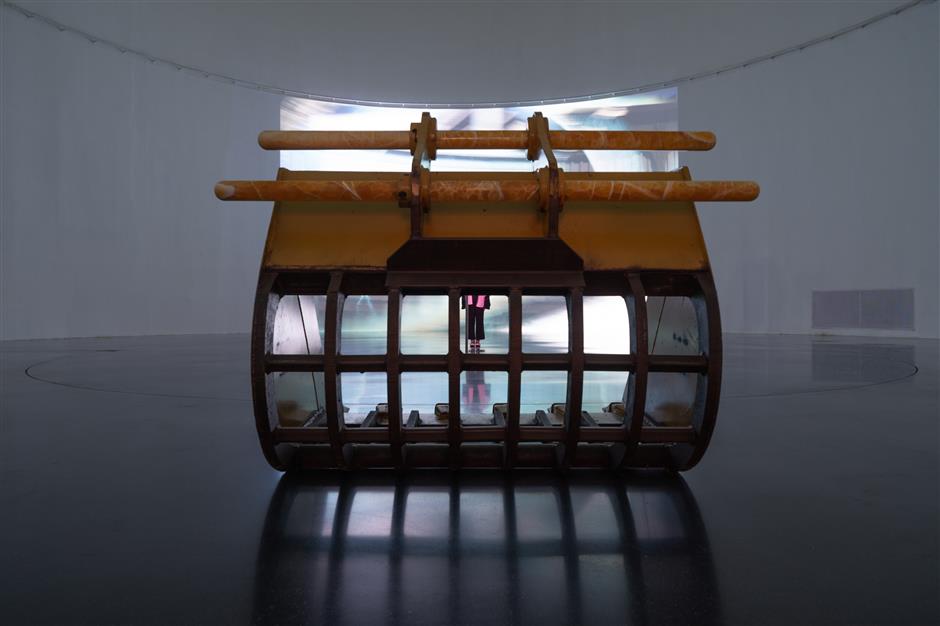 With the patches of rust and faded paint they have collected in the course of their mechanical life, the machines look like archaeological artefacts retrieved from the depths of the earth. The message: Once part of machinery is used as a means for destruction, in order to encourage rejuvenation through building, the now-preserved shovels begin a fossilization process of their own.

All the works are presented in a semi-circle, taking viewers on a journey back and forth between prehistory and the present.