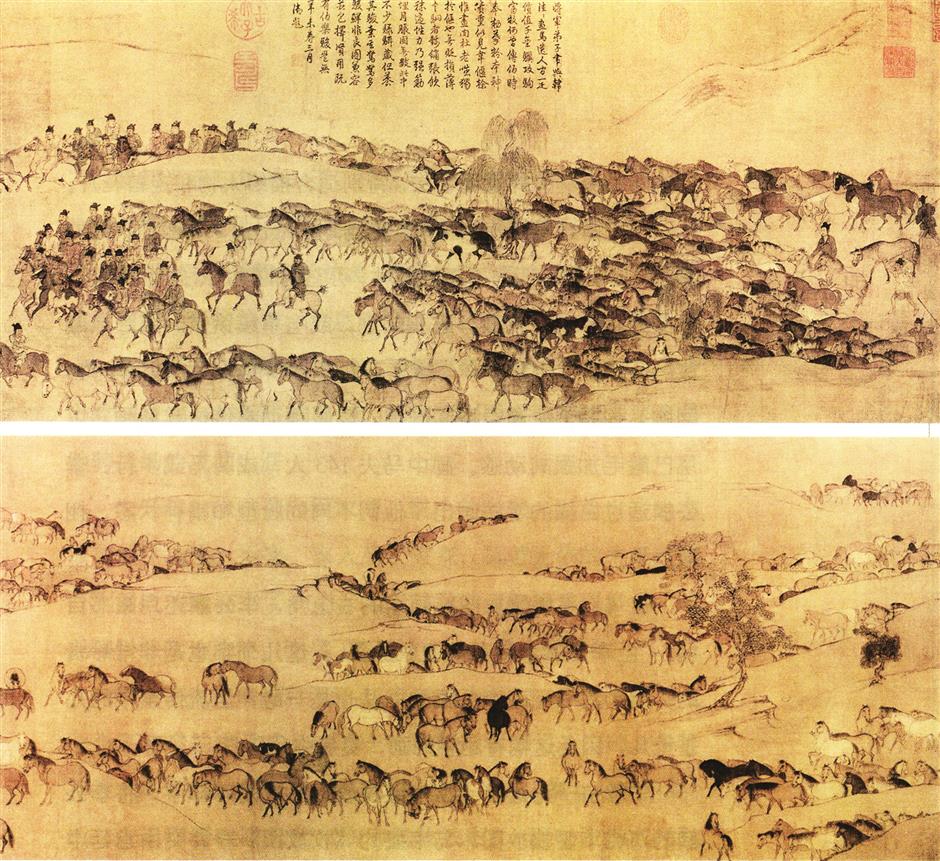 The horse has been admired by Chinese people since ancient times. The animal symbolizes faithfulness, vigor, prosperity and a nobleness in Chinese culture.

A handscroll painted by Li Gonglin of the Song Dynasty, featuring 1,286 horses and 143 people, was a facsimile of Wei Yan’s work called “Imperial Horses at Pasture (mufang tu).” Wei was a Tang Dynasty painter famous for his depiction of horses.

Wei’s original painting was sent as a tribute to Emperor Huizong (1082-1135) of Song. The art enthusiast was thrilled by it and sighed that no one could create such an amazing painting any longer. However, an official recommended Li to the emperor and believed that the artist was able to paint an even better one than the original.

Li was born in 1049 in Anhui Province. He was good at portraying landscape, historical stories and especially horses.

It is said that Li passed by an imperial stable one day. He was excited to find a number of gallant horses there. Many of the treasurable horses were gifts by the Western Regions to the imperial court.

Li would often visit the stable to observe and practice painting the horses. After a period of time, the stable’s director was reluctant to let Li come.

Li thought that maybe he had disturbed their work so he made an apology to the director. The director replied that he was afraid Li would “paint away” the horses’ vigor — the horses he painted were too vivid and energetic.

The story was widely spread at that time. More and more people heard about Li’s superb painting skill, including Su Shi (1037-1101), who is regarded as one of the most accomplished figures in classical Chinese literature. Su praised Li for his painstaking craftsmanship in a poem.

In Li’s version of “Imperial Horses at Pasture (mufang tu),” he adopted baimiao, which is a plain drwaing technique in Chinese painting. It produces a finely controlled outline. The technique is commonly used for figure, animal and flower paintings.

All of the tiny 1,286 horses, less than four cun in height (3.33 centimeters) and width, have a variety of postures. Delineated with steady monochrome brush lines, the horses were touched with black and brown colors.

Some horses have their heads lowered, others graze in the meadow or drink at a distant river, a few are lying down having a rest, while another group of horses are rolling on the ground or chasing each other.

The thousands of horses are guided by a total of 143 herders. The majority of them ride horses, while a few people walk. Three herders, who look exhausted, doze in the shade of a tree. Through their clothing, these three herders are believed to be Khitan people.

Viewed from right to left, the handscroll changes in tone from magnificent to peaceful. The layout also shifts from compact to loose.

Li’s calligraphy was also considered incomparable. On the top-right corner of Li’s work, there is a self-inscription, which reads “I, Li Gonglin, copied Wei Yan’s ‘Imperial Horses at Pasture (mufang tu)’ by the emperor’s command.”

Li’s version passed through many emperors’ hands, including Emperor Hongwu (1328-98), also known as Zhu Yuanzhang. He was fond of the painting, not only because of Li’s virtuosic artistic skills but also it reminded the emperor of the days when he led thousands of soldiers and horses into battles.

Zhu was born into a poor family of farmers in today’s Fengyang in Anhui Province. In the middle of the 14th century, the peasant revolts swept across China.

Transformed from a nobody to a commander, Zhu participated in the uprising for 19 years. His force finally ended the Mongol-led Yuan Dynasty (1271-1368).

Zhu wrote down his comment about his life experience and gratitude to horses on the handscroll.

Without flowery language, Zhu’s writing was plain, which along with his ugly handwriting were obliquely teased by Emperor Qianlong (1711-99), who left a comment beside Zhu’s.

Their conversation across time adds charm to the handscroll.

Wei’s authentic painting was looted and destroyed during World War II (1939-45). Fortunately, Li’s remake survives and is displayed at the Palace Museum in Beijing.