Ceramics on view at Zhejiang Museum 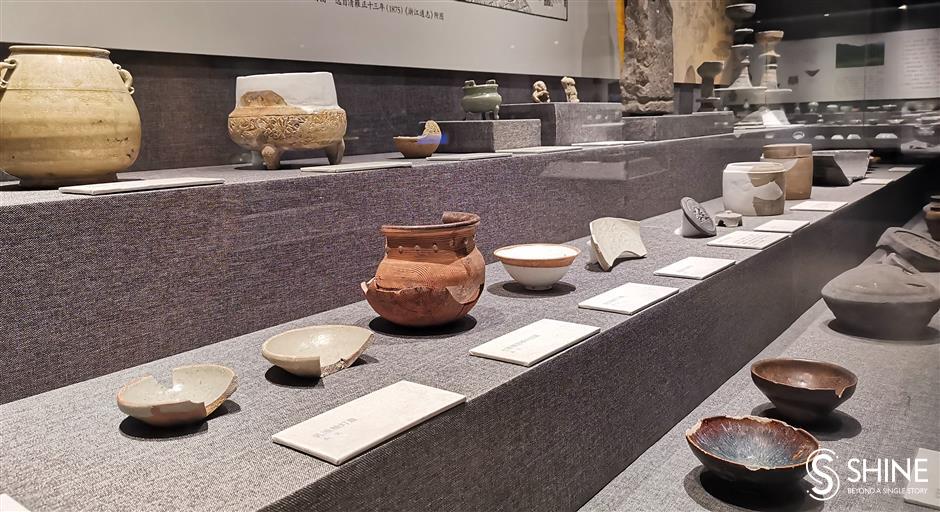 Around 200 porcelain wares from the Fanshi Bridge Relic Site are on display at the Gushan Pavilion of Zhejiang Museum in Hangzhou.

An ancient saying goes: “If Suzhou and Huzhou are ripe, the country is satisfied.” This is because food supplies from the two cities were once so abundant that they could feed the entire country.

Suzhou, long known for its refined gardens and cultural traditions, might steal the thunder of low-profile Huzhou, but this latter city still boasts the remnants of an impressive past.

In 2015, the Fanshi Bridge Relic Site was discovered at Yinziqiao Village, Nanxun District in Huzhou. Large quantities of ceramics, lacquered objects, iron tools and wooden articles were unearthed there.

After four years of excavation by the Zhejiang Archeology Institute, 200 porcelain works from the relic site are now on display at the Gushan Pavilion of the Zhejiang Museum in Hangzhou through February 9.

Altogether, the institute has excavated about 2,700 artifacts from the 975-square-meter Fanshi Bridge site, which bring to light the glories of ancient Huzhou.

During the Song (960-1279) and Yuan (1271-1368) dynasties, this area was a production center for ceramics. People fired daily-use vessels and containers for flower arrangement, incense burning and tea ceremonies.

A collection of flowerpots was also discovered there. When Huzhou’s handicraft industry thrived, people practiced flower arrangement and bonsai planting as activities of great subtlety and refinement.

Bonsais were often made of small pines, bamboo and plum trees. As symbols of winter and harbingers of spring, they flourish in the snow. The exhibited flowerpots were monochromatic with floral and vine patterns.

The Song Dynasty was dominated by a preference for simply adorned handicrafts. Unlike the preceding Tang Dynasty (AD 618-907), with its emphasis on ornate design, Song craftsmen produced porcelain pieces with light colors and plain ornamentation. 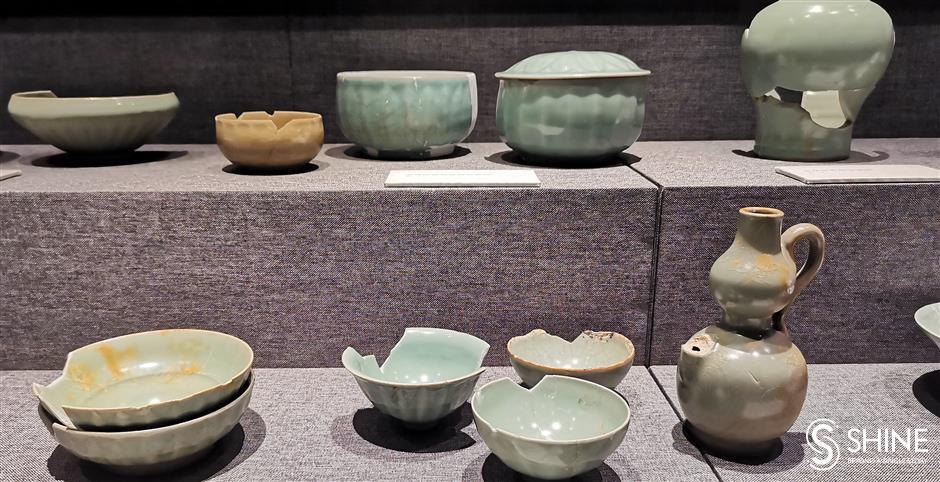 As cultural exchanges increased across the country, different ceramic firing skills were blended together. Folk kilns were integrated with imperial kilns, too.

The exhibition displays porcelain works with different kiln characteristics. The showcased celadons are believed to be the result of exchanges between Huzhou and the ancient Longquan Kiln in Zhejiang Province.

Celadon is a grayish-green glazed porcelain which originated from Longquan County. Craftsmen inte-grated the techniques of northern and southern China’s ceramic industries to develop multiple shades of green glaze.

Showcased objects include vases, incense burners, tea vessels and bowls. Their shapes and glazes epitomize the firing techniques of the Song. 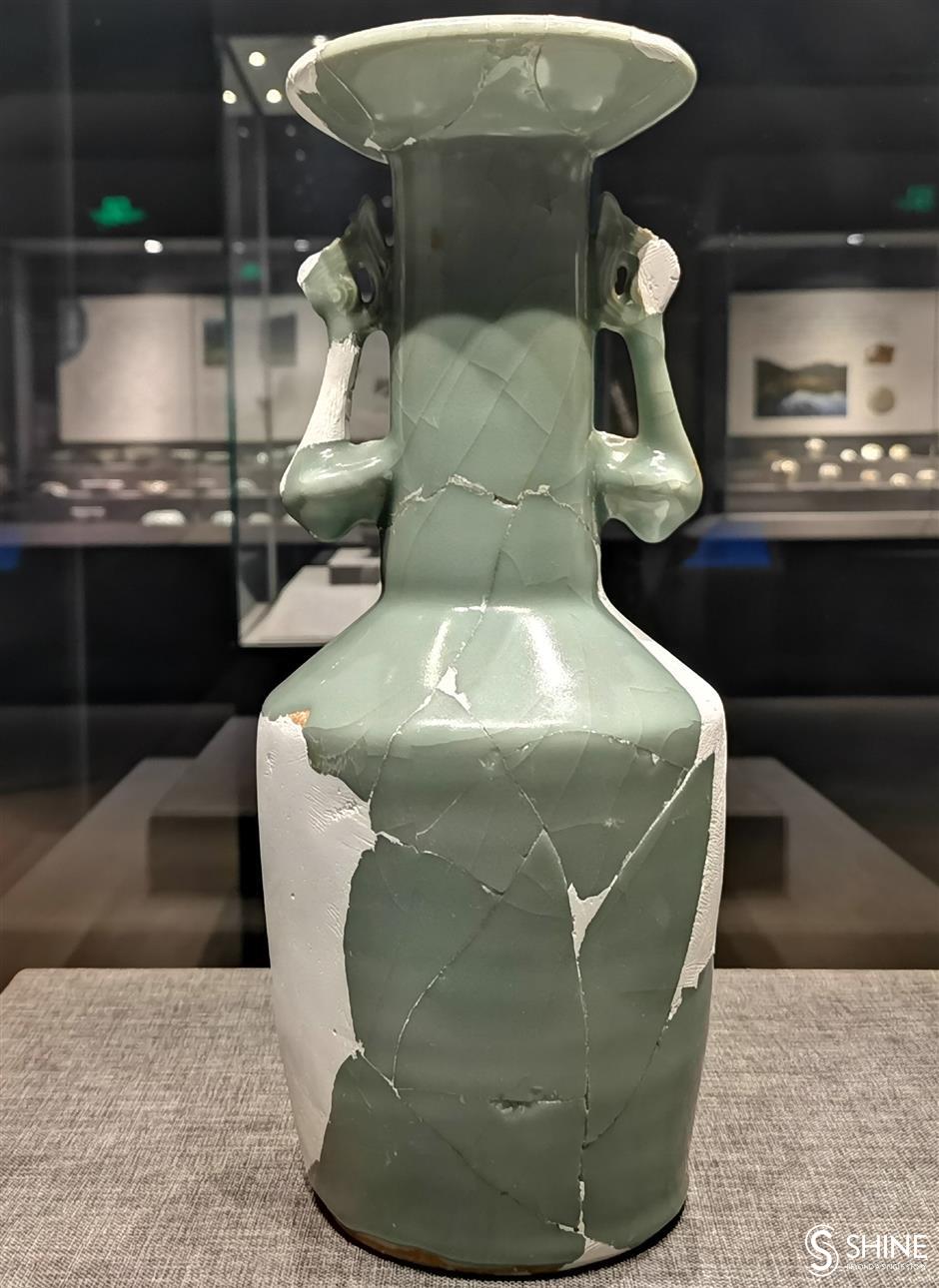 A piece of celadon vase

The Fanshi Bridge area was also discovered with porcelain wares made according to techniques of the Jingdezhen Kiln, located in Jiangxi Province.

During the Song and Yuan dynasties, Jingdezhen developed its distinctive qingbaici style of green-and-white ceramics. Muted shades and quiet simplicity are the main features of this style. They fuse the characteristics of celadon and white porcelain, and have been compared to jade because of their texture and finish.

In stark contrast to these refined artifacts are the displayed hanping (or Han vessels). These were used to carry water in the army of General Han Shizhong, who served in the Southern Song Dynasty (1127-1279) and performed many legendary deeds in wars. The vessels were named after him.

Since they were often made in a hurry, most vessels feature a coarse texture. During the following dynasties, hanping became mass-produced army water bottles. In modern times, they have provided historians with material to learn about ancient armies.

Date: Through February 9, closed on Mondays