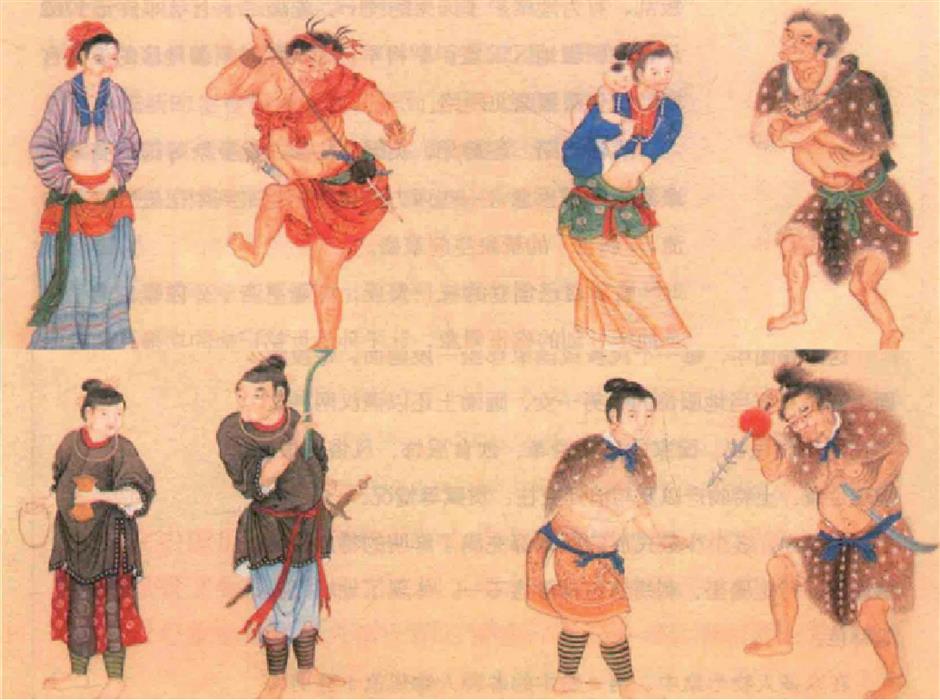 The handscrolls’ series, “Huang-Qing zhigong tu,” or Diplomatic Relations in the Qing Dynasty, was commissioned by Emperor Qianlong (1711-99) to highlight the ties with foreign countries and tribes at that time.

A fascinating piece of artwork depicting more than 600 figures on four precious Qing Dynasty (1644-1911) handscrolls, measuring over 60 meters, is a must-see for all lovers of Chinese art. The artwork features figures from several different foreign countries and ethic groups of China.

The handscrolls’ series, “Huang-Qing zhigong tu,” or Diplomatic Relations in the Qing Dynasty, was commissioned by Emperor Qianlong (1711-99) to highlight its ties with foreign countries and tribes at that time.

In 1751, the emperor asked local officials to paint natives of different classes and send the paintings to Junjichu (the Grand Council), which was an important policy-making body during the Qing Dynasty.

After the sketches were collected, Emperor Qianlong arranged four court painters, Ding Guanpeng, Jin Tingbiao, Yao Wenhan and Cheng Liang, to collate the materials and repaint them. The quartet spent 10 years completing the handscrolls. Each painting features a man and a woman of a tribe or a country, and is accompanied with an introduction of the history, customs, geography, local specialties and the relationship shared with the Qing government and tributes to the court. The introduction is written in both Chinese and Manchu language.

The first handscroll depicts 32 Chinese tribes from different regions, including today’s Tibet Autonomous Region and Xinjiang Uygur Autonomous Region, and 27 foreigner countries, including Japan, Russia, England and France. The people from the Atlantic Ocean region are featured in the first handscroll. They wear red and green clothes and are depicted with dark skin and curly hair

One of the tribes added to the handscroll is Torgut, which originated from Oirats. In the late Ming Dynasty (1368-1644), the tribe moved to the lower reaches of the Volga River. However, they soon fell under Tsarist Russian control. Ubashi Khan, leader of the tribe, then decided to return his people to their ancestral homeland under the rule of the Qing government at that time.

Only 43,000 out of 170,000 people survived the journey. In order to honor their return, Emperor Qianlong received Ubashi at the Chengde Mountain Resort and sent the tribe many gifts. The figures of Torgut leaders, nobles and ordinary people are featured in the handscroll.

During the reign of Emperor Qianlong, the territory of Chinese empire grew to a size unprecedented in its history. It extended its coastline to the Sea of Okhotsk. The multi-ethnic empire was comprised of more than 200 tribes, each with their indigenous religious traditions, costume and food culture. To handle relations with the people of different ethnic groups, the Qing government established a bureau called Lifan Yuan.

Enhancing the governing of Tibet, Emperor Qianlong paid great attention to the administration over the Living Buddha reincarnation. He founded a system of drawing lots from a golden urn to choose the reincarnation of a Living Buddha. The succession system was established to prevent Tibetan and Mongolian upper-class nobles from seizing religious and political power.

Under the reign of Emperor Qianlong, the Zunghar Khanate was incorporated into the Qing Empire’s rule and renamed Xinjiang. Emperor Qianlong was proud of his prosperous and powerful empire. To be enshrined in the heart of later generations, the emperor asked artists to create “Huang-Qing zhigong tu,” which is one of Qianlong’s favorite artworks.

There are also two line-drawing versions, which were created during the reign of Emperor Qianlong. One compiled by Fuheng, a senior minister and brother-in-law of Emperor Qianlong, along with other scholars, can be seen in the Palace Museum in Beijing.