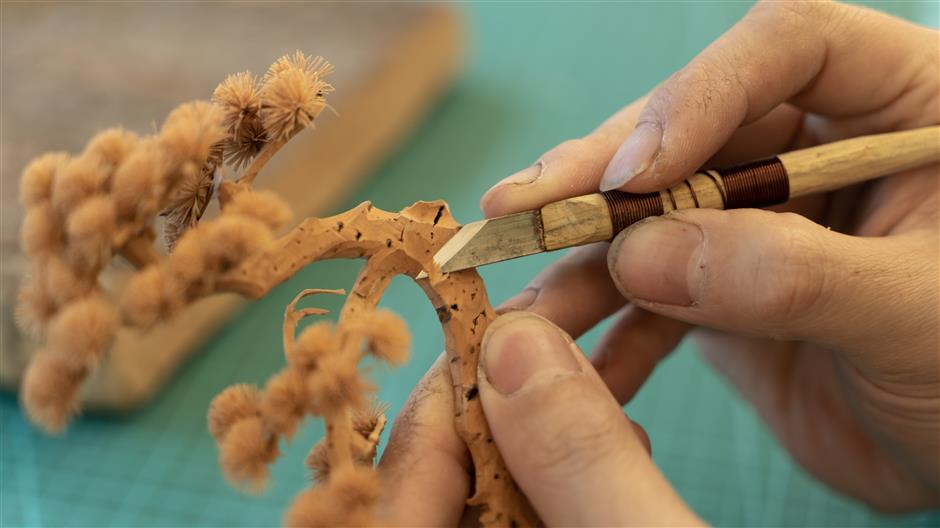 A material more widely known for use as wine stoppers becomes delicate art in the skilled, imaginative hands of Chinese craftsmen.

Cork is more than just a material to plug wine bottles or make summer shoes, acoustical tiles and badminton shuttlecocks. It is also art in the hands of skilled artisans, particularly in the southeastern province of Fujian.

Inspired perhaps by wine stoppers, a wood-carving artist named Wu Qiqi from the provincial capital Fuzhou transformed cork into a unique art form in 1914. He combined the bark of cork oaks imported from Europe with traditional Chinese carving techniques. The art he created has come to be called “a silent poem” expressing the beauty of Chinese landscape.

This week, an online crowdfunding event on the Yitiao, a video-focused content producer and e-commerce startup, raised money to save the dying Fuzhou cork-carving art genre as part of Shanghai’s Quality Life Week.

Cork is impermeable, springy, flexible and corrosion-resistant. It is not easy to obtain. Nearly two-thirds of the world’s cork oak forests grow on the Iberian Peninsula.

The trees live for about three centuries, and cork is not stripped from their bark until the trees are 25 to 30 years old. Only 10 kilograms of cork can be harvested from tons of oaks. Yet the material is considered environmentally friendly.

Cork art uses a cork layer as thin as 0.05 millimeters. 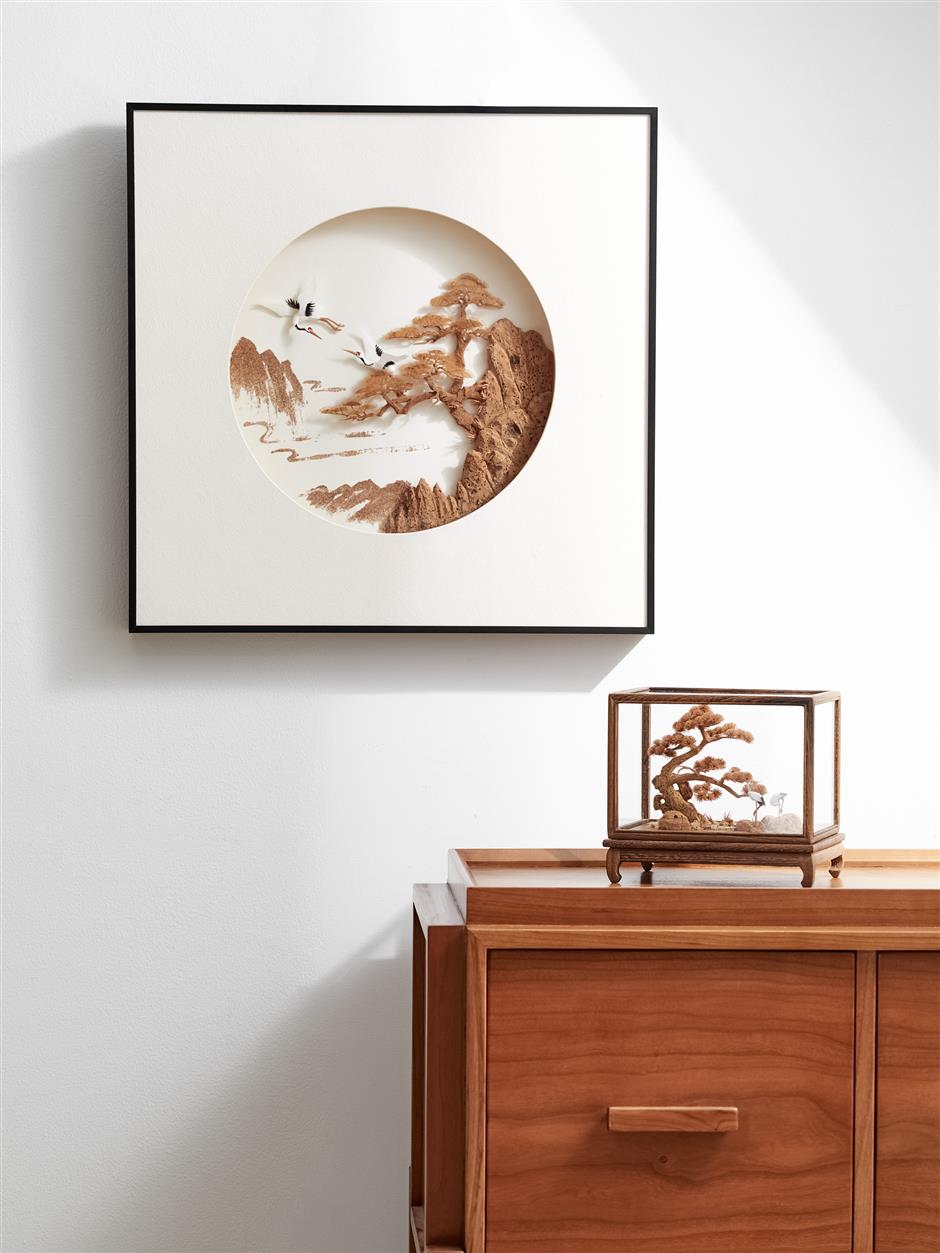 Cork carvings designed by Lin Xiang are available at the online platform Yitiao.

A young cork carver named Lin Xiang creates two styles of modern cork carving. One with a pair of carved cranes standing beside a pine tree serves as a three-dimensional table decoration. The other, which is more modern and can be hung on walls, shows a pair of cranes flying from a pine tree rooted on a steep cliff.

“A piece of work requires four to five craftsmen,” said Lin, 31. “Only five to six pieces can be completed every day.”

The crowdfunding goal of 50,000 yuan was achieved in just half a day.

“Our users are mainly the middle class,” said Caty Chen, a product buyer for Yitiao and initiator of the crowdfunding event. “People are less price-sensitive and care about the quality of products. For users, we help them to find fine products that are rare to see on other platforms. For craftsmen, we help them explore new sales paths.”

Chen, 25, is the native of Fuzhou. She said the art is a way of introducing people to the craft skills of her hometown.

Cork carver Lin is also a native of the city. He recalled seeing cork carvings in the homes of relatives when he was a little boy. However, he didn’t come to fully appreciate the art form until 2011, when he went to a job fair and came across a cork-carving company looking for employees.

Having studied fine art at university, Lin decided that was where he wanted to work, which led him to meet his mentor, Chen Xiyan.

Chen, 75, is a famous cork-carving artist in China, dedicated to the art form since 1961. He has watched cork carving slip into decline from its pinnacle.

As a means of earning foreign exchange, artists in cork art sold their works overseas in the 1970s and 80s. However, the demand for the works gradually decreased. As income dropped, few artisans were drawn to cork art.

“There are less than 30 artists specializing in cork carving left in China, and most of them are 60 years and older,” said Chen. “Among them, only three are capable of doing the whole process of the artwork by themselves.”

Chen himself is one of those three. He designs, carves and mounts cork art in traditional patterns of architecture, plants, animals and sculptural garden rocks.

Both Chen and Lin are pessimistic about the future of cork carving.

According to Lin, one elderly craftsman who excelled in carving animals of cork was taken ill recently and can’t work any longer.

“There would never be another artist like him,” said Lin. 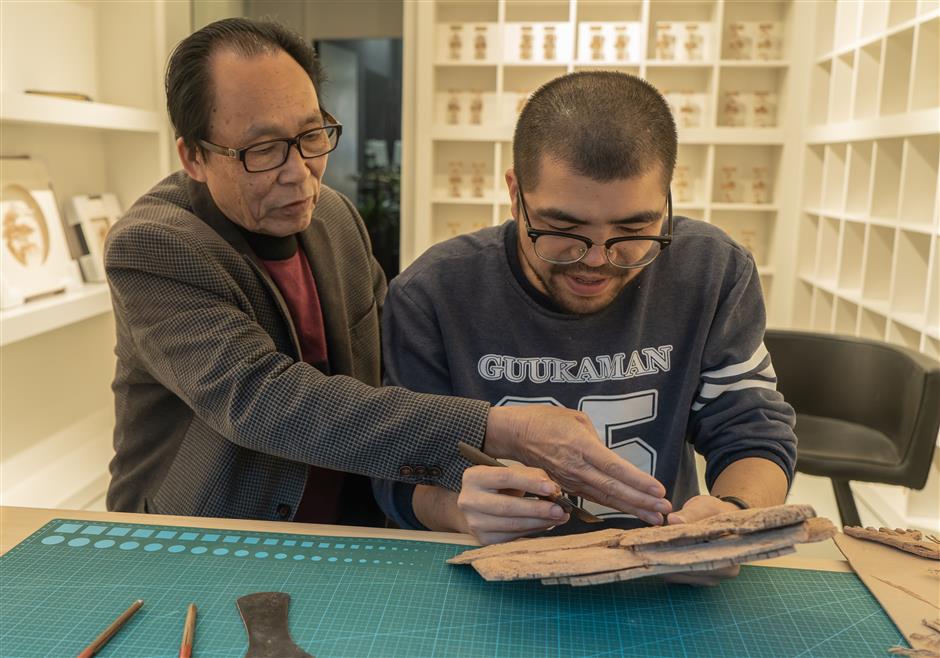 To try to revive the dying art, the two generations of cork artists are taking different paths.

The young Lin is introducing innovation into the artworks, shifting from merely ornamental objects to practical items such as lamps and speakers. Moreover, he works with online platforms like Yitiao to attract young people to the art.

“Compared with traditional sales methods, like made-to-order or sales at tourist attractions, online promotion is much more efficient,” said Lin. “It reaches a broader market. Sales are not the point; it’s the popularity of the culture that matters.”

The older Chen focuses on the root of cork art, giving classes in the carving skill at a local technical secondary school.

“Sadly, few students really want to pursue cork carving for income reasons,” said Chen. “But I am willing to offer unconditional support to those who want to become inheritors of the technique.”