After wheat is harvested, the stalks are typically burned as waste.

Some people occasionally weave straw into hats and baskets. But when Yao Yijia sees the straw, she sees the makings of exquisite art.

Her interest in wheat straw painting began in high school, when she visited a friend of her mother’s who was accomplished at the craft. Yao was stunned by the delicacy of his artwork — a genre that dates back to the Sui (AD 581-618) and Tang (AD 618-907) dynasties.

When Yao said she wanted to learn the craft, both her mother and the friend thought she was joking.

“The craftsman told me that young people lacked the patience to do it, but he still gave me some material and wished me luck,” says Yao, whose interest in art dates back to her childhood. 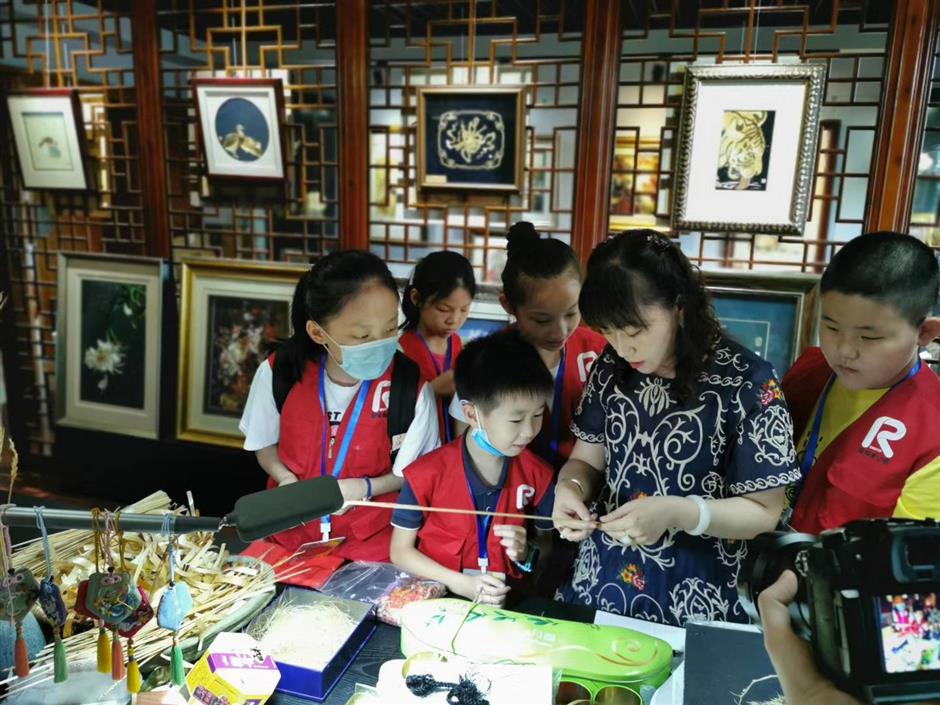 In her workshop, Yao Yijia shows students how she makes wheat straw artworks.

Yao took the craftsman’s challenge seriously. She tried to get most of her homework done at school so that she would have time at home to practice straw painting. Surprised by her diligence, the craftsman took her on as an apprentice and told her the apprenticeship would end in three years if she could produce a sophisticated artwork in that time.

Three years? It seemed like a long time for a girl brimming with ambition. Yao thought she could accomplish the task in one year. She set to work on a wheat straw painting that featured parrots snuggling on twisted tree branches. The artwork was patterned with plants in a lattice-shaped frame.

“I failed twice,” says Yao. “The first time, I applied too much glue on a plant petal. I had already spent four months on the painting and it was almost done. I seldom cry, but that time, I burst into tears. The second time I made a mistake while ironing a piece of straw.”

Third time lucky. Yao finally succeeded in finishing the painting. But at that point, her interest in straw painting had no bearing on choosing a career. 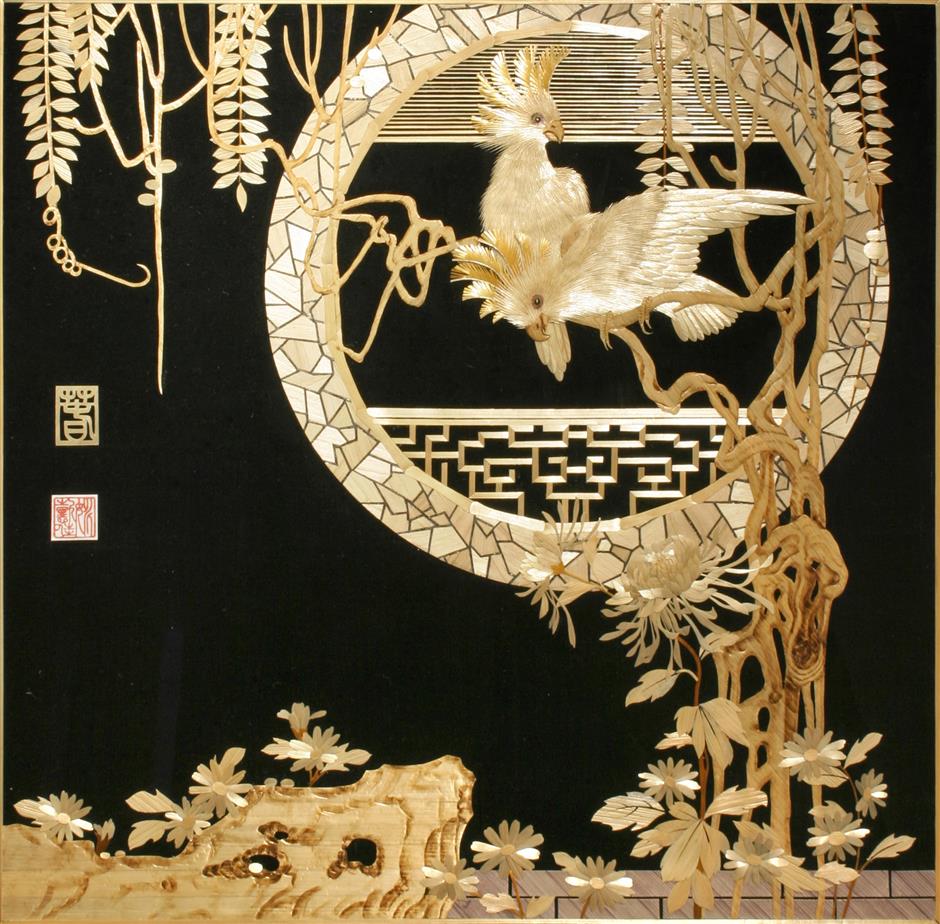 Yao majored in costume design at Donghua University and was recommended to be a computer-aided designer, earning 5,000 yuan (US$705) a month.

“I gave up the stable job because I suddenly realized that the thing that I wanted to do most for the rest of my life was wheat straw painting,” she says.

Yao was supported by her open-minded parents, who went with her to rural areas to collect wheat straw that was long, straight and flexible. The straw must be cut by hand before sitting in the sun for one month.

Straw of various colors — red, orange, black and brown — can be found on Yao’s artworks.

“They are all natural,” says Yao. “The black straw was found by a friend while traveling in Africa. The red ones came from Anhui Province, when I was visiting there with my family. They are truly the gifts of nature.”

The whole process of creating a straw painting is complicated and meticulous. A design is needed; straw is collected. The stalks have to be cut, immersed in water, scraped to eliminate inside fiber, ironed, trimmed and pasted.

“It is a time-consuming craft,” says Yao. “In a day, I can split only 20 stalks into strands as thin as hair. In order to provide me with a quiet environment, my parents often go out shopping or to watch a movie while I am working.” 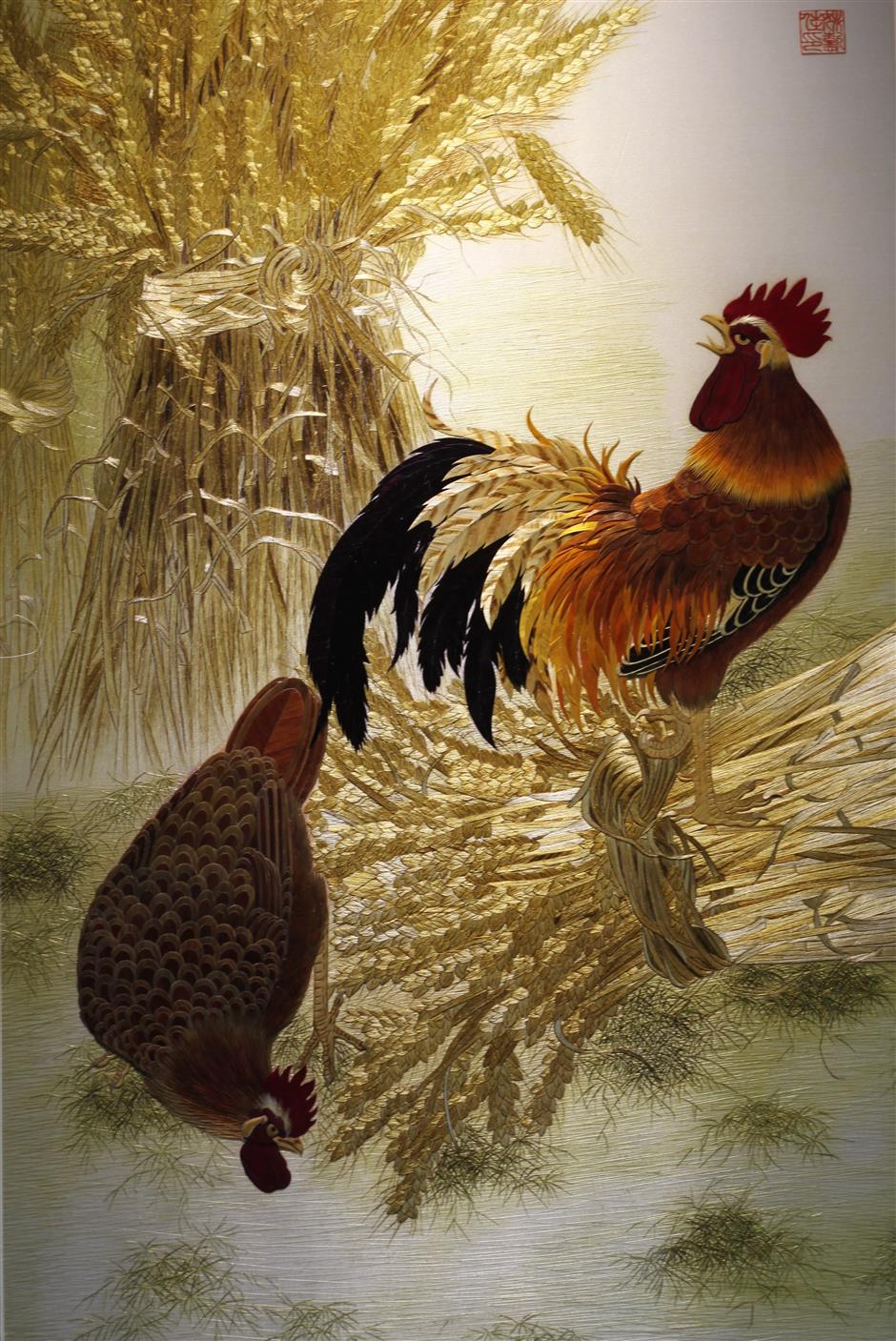 Perhaps because wheat straw is so commonplace, the art form wasn’t widely recognized among traditional Chinese crafts until several years ago.

“An expert once questioned why a young, able-bodied person with a college degree would choose to be a straw artist,” says Yao. “His words really hit me. I wanted to prove myself and to innovate the traditional art.”

After taking part in many exhibitions, she came up with the idea of combining straw painting with Suzhou embroidery. So she spent two years studying the embroidery under a Suzhou master.

The complexity of that craft had her questioning whether she had made the right career choice, especially when so many of her friends were engaged in lucrative jobs.

Returning to Shanghai, she established a workshop specializing in made-to-order embroidery and wheat straw painting. Business was bad at first, but it began to pick up after one customer ordered 20 pieces.

“People like the arts, but they just don’t know them,” says Yao.

One of her representative works features a hen and rooster, which took her a year to complete. Standing on a pile of straw, the chickens’ glossy, colorful feathers are made of wheat straw, while golden straw is woven through silk threads.