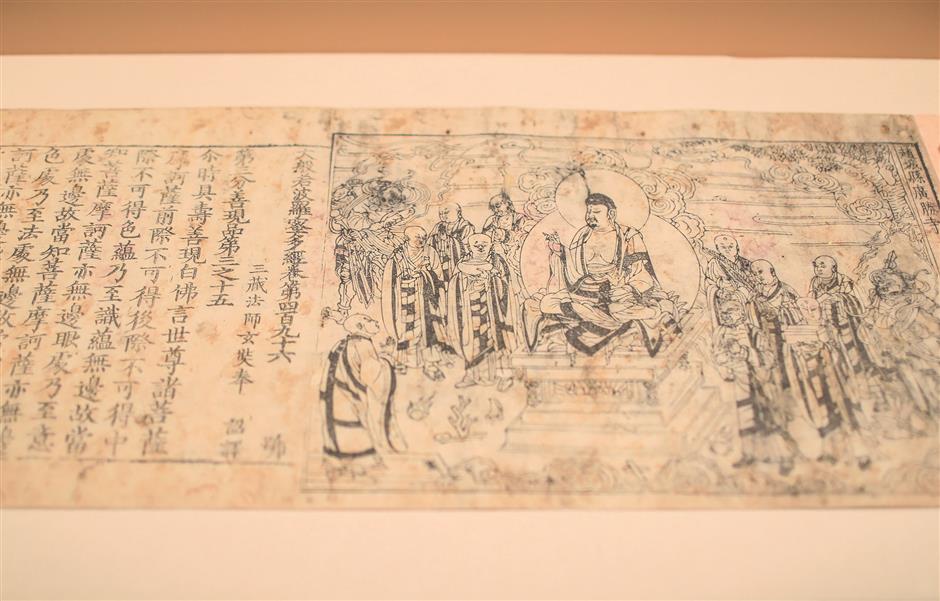 Dating back to the Jin Dynasty (1115-1234), the woodblock print of “Zhaocheng Jin Tripitaka” is the earliest and most complete surviving Tripitaka in China.

A Chinese copy of the Buddhist canon “Zhaocheng Jin Tripitaka” is recognized as one of four wonders of the National Library of China along with “Yongle Encyclopedia,” “Siku Quanshu” (“Complete Works of Chinese Classics”) and “Dunhuang Manuscripts.”

Dating back to the Jin Dynasty (1115-1234), the woodblock print of “Zhaocheng Jin Tripitaka” is the earliest and most complete surviving Tripitaka in China. Tripitaka is a traditional term for the Buddhist scriptures, which took craftsman 24 years to carve and print from 1139.

The Buddhist canon has 6,980 volumes of text, featuring over 60 million characters, among which more than 4,000 volumes survive. They are housed in the National Library of China in Beijing and Linfen Museum in Shanxi Province.

“Zhaocheng Jin Tripitaka” is based on the Tripitaka printed during the Kaibao Period of the Northern Song Dynasty (960-1127). The Kaibao version was destroyed by fire in the Jin-Song Wars.

It is named after the place where it was found — Zhaocheng County, today’s Hongtong County in south Shanxi Province. In the county, there is an architectural complex named Guangsheng Temple, which was first constructed in AD 147 and rebuilt in 1305 due to an earthquake.

In 1933, an eminent monk named Fan Cheng visited Guangsheng Temple and researched the sutras (Buddhist scriptures) collected at the temple. Among the sutras’ thousands of volumes, Fan was surprised to discover how precious the Tripitaka was. However, no one knew who funded the masterpiece at that time.

Fan’s discovery caused a sensation throughout the cultural circle. Apart from Buddhism, the Tripitaka refers to philosophy, history, language and literature.

One year later, Jiang Weixin went to Guanghsheng Temple to study the treasure. He took 40 days to write a 15,000-word article, which demonstrated the origin of the “Zhaocheng Jin Tripitaka.”

Jiang’s research revealed that the woodblock print was funded by a woman named Cui Fazhen from Changzhi in Shanxi Province.

When Cui was young, she was unable to speak. But when she was 17 she met an old monk who resolved her speech problem. Cui and her family members visited the monk and expressed their thanks.

The family discovered the monk wanted to print the Buddhist scriptures but he didn’t have enough money.

Cui decided to help the monk and, in her zealous desire, cut off her left arm and started begging. Touching numerous people, Cui raised enough to fund the printing of the Tripitaka after decades of struggle. The printing began in 1148.

Cui’s story is also recorded in the “Yongle Encyclopedia.”

In 1937, a Kuomintang troops commander, Li Mo’an, went to Guangsheng Temple and told the Buddhist abbot that the troops’ leader Chiang Kai-shek (1887-1975) demanded the “Zhaocheng Jin Tripitaka” to be transported to Xi’an in order to preserve it. The abbot, called Likong, didn’t refuse Li directly but invited him to attend a banquet the following day.

Likong was a venerable figure in the community. He spoke with the local gentry, who would attend the feast, and asked them to refuse Li’s demand. Fortunately, the sutras were well preserved at the temple this time.

However, the fate of the Tripitaka continued to hang in the balance.

During World War II, many Japanese were willing to pay over the odds to get their hands on the treasure.

Likong and other monks rejected their requests. Fearing something bad would happen to them, he asked monks to transfer the sutras to the 13th floor of the Feihong Pagoda in the temple.

Among one of the four surviving ancient pagodas in China, Feihong Pagoda is the largest one decorated with glazed tiles on its walls. An annual ritual is held in the Guangsheng Temple on the 18th day of the third lunar month and the ceremony lasts for 10 days.

In 1942, Likong was informed that Japanese forces would visit the temple during the period. He hurried to find the county magistrate, who reported the urgency to officials of the Eighth Route Army based in the Taiyue Military Region. The officials further reported to the Central Committee of the Communist Party of China and were ordered to spare no effort to preserve the national treasure.

On the evening of April 25, over 120 people spent around four hours transporting more than 5,000 volumes of sutras from the pagoda to a village called Kangyi in Shanxi Province.

But, because Japanese forces were in hot pursuit, the sutras were moved to several secret places, including caves and coal pits. Unfortunately a soldier of the Eighth Route Army was killed battling Japanese forces to save the sutras.

In 1949, the sutras finally ended their vagrant life when they were transferred to the National Library of China, and after 17 years of restoration, 4,813 volumes of sutras still remain.