Vim and versatility of China's own virtuoso

Violinist Ning Feng, 39, has had scheduled appearances canceled this year, a mirror of what has befallen musicians around the world in the time of coronavirus.

One accomplishment he did manage to complete amid the adversity was a recording of Paganini’s “24 Caprices for Solo Violin” in January — realizing a goal he had set for himself before turning 40.

“It’s like leaving a photo of a slim, handsome self in youth to show people someday that I was once good-looking,” Ning said of the recording.

“Paganini’s works demand exquisite skills,” he told Shanghai Daily. “His works are somewhat for young violinists. If we talk about music complexity and philosophy, it ought to be Beethoven and Bach.”

Another accomplishment this year for the German-based Chinese native was his recent appearance in four concerts at Shanghai Symphony Hall. His performance of Beethoven’s Violin Concerto in D major was the opening concert of the Shanghai Symphony Orchestra’s new music season.

Ning’s presence in Shanghai is related to his position as this season’s artist-in-residence. He was given the option of delaying the stint until next season because of virus-related travel complications, but he insisted on keeping to schedule, despite few flight options and strict quarantine measures upon arrival.

“It is a great honor for me to be artist-in-residence with the top-notch Shanghai Symphony Orchestra,” he explained in an interview after a rehearsal with the orchestra and its music director Yu Long.

“The Violin Concerto in D major has a special place in my heart,” he explained.

The violinist vividly recalls his first encounter with Yu.

It was 2006, and Ning was fresh from winning the International Paganini Competition. Yu had studied years earlier in Germany before returning to China, bent on changing the classical music scene in China.

“At the time, it was a huge opportunity for me to play for him,” Ning said. “So there is special appeal in playing the same piece with him and the Shanghai Symphony this time. Yu was very particular and demanding at rehearsals, often stopping to give detailed instructions.”

Beethoven wrote only about a dozen works featuring the violin. The Violin Concerto in D major is the only concerto.

“It is a very unique work for violinists,” Ning said. “It starts with four beats on the timpani, and you almost don’t hear the violin solo in the first movement. It is a very symphonic violin concerto.”

The work’s debut in 1806 wasn’t successful with audiences because its composition was beyond public understanding of a violin concerto at the time. It wasn’t until 1844 that the piece was revived by Hungarian violinist and conductor Joseph Joachim (1831-1907) in his debut stage in London. It has since become a repertory classic.

While artist-in-residence, Ning will be flying back and forth from Germany three times. He said he hopes the course of the pandemic will make the journey easier than his summer flight to Shanghai.

“I am somewhat lucky in that I can enter both countries easily because I have a Chinese passport and German residency,” he explained. “Many musicians simply can’t do that now.” 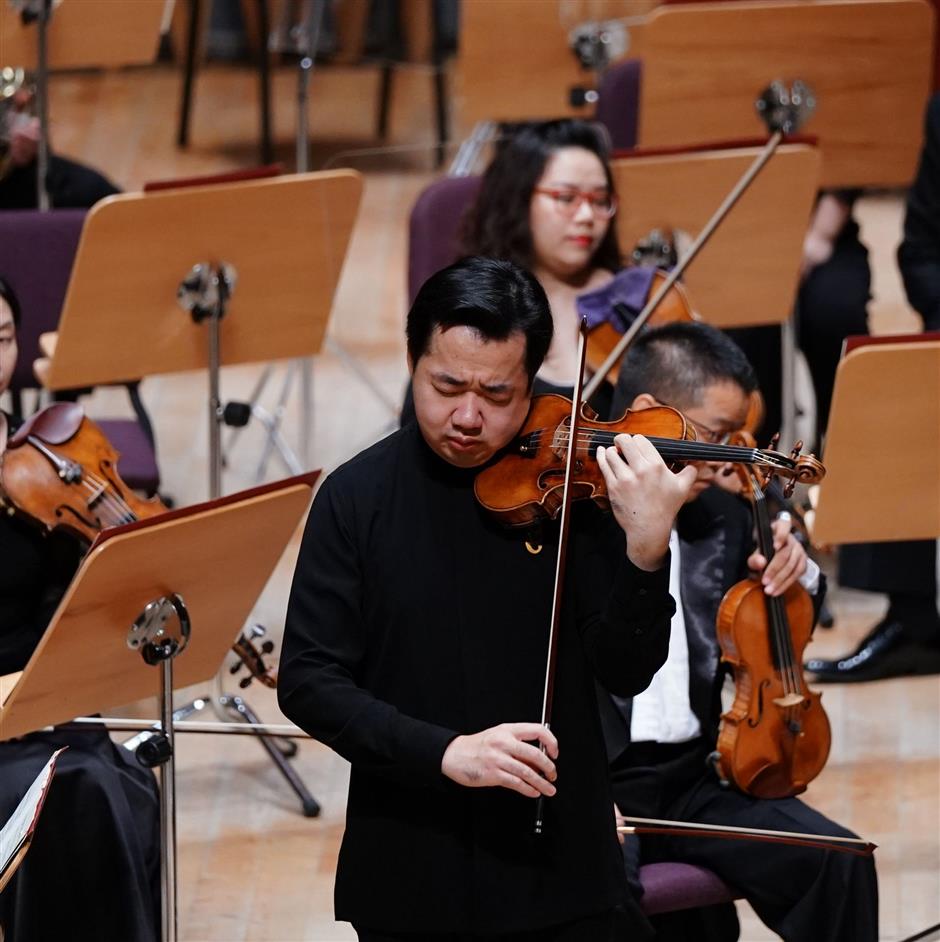 Ning, born in the southwestern city of Chengdu, started violin lessons when he was 4. He later went on to study at Britain’s Royal Academic of Music, where he was the first student ever to receive a perfect grade on his final recital. He later studied at Berlin’s Hanns Eisler School of Music.

In 2012, he founded the Dragon Quartet, in which he plays first violin.

While in Shanghai, Ning, like most locals, carries a mask when out and about. Although Shanghai had no locally transmitted cases for months, many places still require a mask for entry.

“I hope we can get the pandemic under better control soon in Europe,” Ning said.

That hope comes amid a renewed surge of cases in Britain, Spain, France and Italy.

Ning, also a music professor, has given online classes and concerts during the pandemic. New rules in Germany now allow him to give one-on-one lessons to students. Multiple students would require a much larger space, such as a concert hall.

“I’ve never been a big fan of virtual concerts,” he said. “The resonance and musical dialogue in a concert hall can never be matched online. But I have come to some familiarity and understanding of online classes now. High Internet speed has helped a lot.”

He often tells students, from his own experience, that failures are crucial and helpful. He was rejected by potential teachers when he was a child because of short left fingers.

“I failed a lot in my teenage years, too — in almost every competition,” he said. “I have to thank those failures when I look back on it now. I made mistakes in my youth, when I could afford to, so I wouldn’t make them later on stage.”

Ning played a 1721 Stradivarius violin until switching recently to a 1710 one.

He likened it to driving a car.

“I will definitely play Beethoven’s violin concerto,” he said, “and for the encore, I have long set my mind on Bach’s ‘Chaconne.’ It is about 30 minutes long — too long for an encore. Audience may think: ‘Is he ever going to leave the stage?’ But since it will be my last appearance on stage, so be it. Bach’s sonatas and partitas are simply the best violin compositions.”

“The works are so in-depth that I believe I will bring a different understanding to them as I grow older with more life experience,” he concluded.