Wen Tianxiang (1236-83), the heroic official who resisted the invasion of Mongolian troops in Southern Song Dynasty (1127-1279), is rightly remembered in China for his patriotism, righteousness and loyalty to his people and land. Yet, little is known about his brilliant calligraphy skills.

Wen’s excellence in calligraphy art has been well documented in several historical books. His writing in seal script was recognized for its firmness and strength, according to the nine-volume “The Highlights of the History of Chinese Calligraphy,” compiled by Tao Zeyi in 1376. Unfortunately, none of Wen’s seal-script writing can be found today. Only a couple of his semi-cursive and cursive pieces still remain. One of the few classics is in the scroll of a preface he wrote for “Mu Ji Ji,” or “The Anthology of Wooden Rooster.”

Written by Zhang Qiang, a close friend of Wen, the anthology has nothing to do with cockfighting but the author’s attitude toward life and studies.

According to the story, fully-prepared roosters are quite cool-headed and rarely get spooked after 30 days of training. When fighting, they behave as if they are made of wood, often scaring away opponents. Therefore, Zhang entitled the anthology of his own writings with “Wooden Rooster,” a metaphor for his pursuit of being a man of considerable culture and who will remain calm and composed.

At the request of the author, Wen penned the preface in 1273 when he was appointed as a judicial officer in today’s Hunan Province. In the preface, he shared his ideas on poetry and literature, elaborating on the connection between two classics, “Shi Jing” (“Book of Songs”) and “Wen Xuan” (“The Selection of Literary Works”).

The earliest collection of Chinese poetry, “Shi Jing” contains more than 300 poems, songs and odes, some dating back 3,000 years ago. Wen pointed out in the preface that the poems “were written in simple and plain wording, which were still quite hard to master.”

The earliest collection of Chinese literary works, “Wen Xuan” features 700 or so poems and essays, elegantly written in a variety of writing styles. It was highly acclaimed in the Song Dynasty (AD 960-1279), and considered an ancestor of Chinese literature.

In the preface, Wen compared Zhang’s anthology to “Wen Xuan,” recognizing the author’s talent in writing. He urged writers to be strict with their studies and learn from the master — start with “Shi Jing,” then go on with “Wen Xuan.”

A productive poet himself, Wen followed the writing style of “Shi Jing” poetry. Dong Baohou, a senior researcher of Liaoning Provincial Museum, once said: “Most of Wen’s poems are vividly written with simple words and under straight-forward themes. They are easy to understand and yet so powerful; the readers are often overwhelmed by the poet’s strong emotions.”

Many of Wen’s poems are still widely recited by Chinese people today, especially the patriotic ones he wrote in prison. Among them, “Sailing on Lonely Ocean,” he writes the words: “Since olden days there’s never been a man but dies; I’d leave a loyalist’s name in history only.” 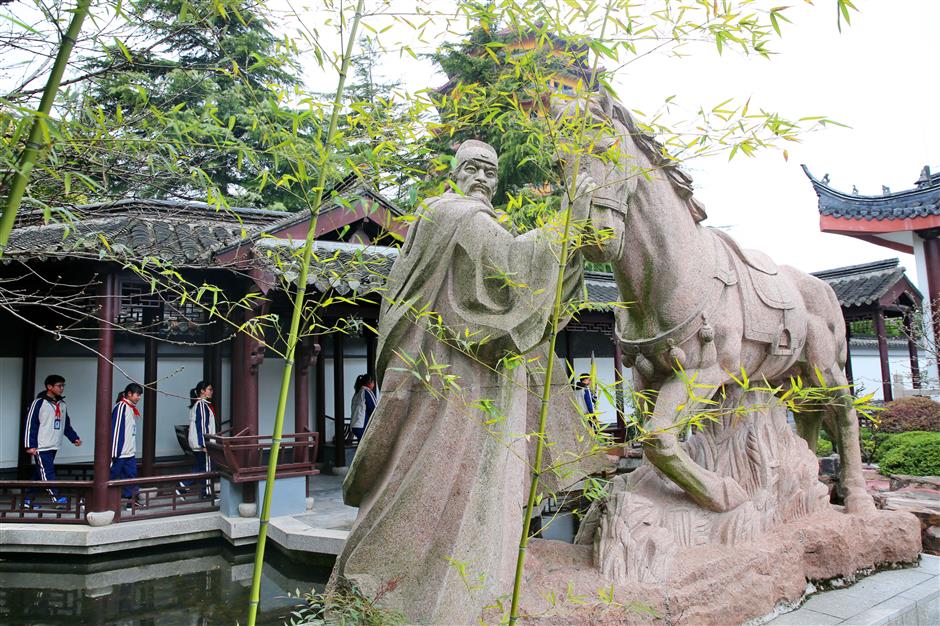 Measuring 96.5cm by 24.5cm, the scroll of Wen’s preface was written in a cursive script in a steady and fluent manner. Written in 24 rows, it is elegantly scattered in a clear layout. Each character is written in a composed composition with a lower center of gravity, showcasing strength and delicacy. Done by the wielding of a brush, the whole piece is written fluently and restraint to keep the size of all characters and the thickness of brushstrokes consistent.

Six months after he penned the preface, Wen was transferred to today’s Jiangxi Province, where he later called on an army to fight against the Mongolian invaders. He even paid the soldiers out of his own pocket. However, Wen’s force was no match for the strong Mongolian troops. They were defeated in 1278 and Wen was captured. He was kept in a prison in Khanbaliq (today’s Beijing) for three years, where the Mongolians established their capital.

During his time in prison, he was asked to persuade his people and fellow officers to surrender, with an offering of fat payout and a high position in the Mongolian government. It’s said that Kublai Khan, founder of the Yuan Dynasty (1271-1368), personally summoned Wen for persuasion. But he refused and was executed in 1283.

After he died, the scroll of the preface disappeared until the mid-Ming Dynasty (1368-1644). Speculation raged that collectors secretly kept it from the Yuan governors. It was later included in the royal collection of Emperor Qianlong (1736-1796), who was a passionate collector of Chinese calligraphy and ink painting. After the fall of the Qing Dynasty (1644-1911), the last emperor Puyi took the scroll and other royal treasures to northeast China. The treasured piece is now preserved in Liaoning Provincial Museum.