Calligraphy and sculpture in 'visual dialogue'

Chinese calligraphy is all about lines or the flow of ink, while sculpture is more about three-dimensional artwork. It seems the two art forms don’t have any connection.

However, an exhibition currently under way at the art museum of Shanghai Oil Painting and Sculpture Institute is conducting a “visual dialogue” between Chinese calligraphy and sculpture via a series of art pieces.

Initiated by He Yong, a local sculptor, and Han Bi, academic director of the exhibition, the works on display embrace both calligraphy and sculpture.

“This is rather a challenge for all participating artists, and some especially created new works for this exhibition,” said Han. “In the eyes of many, calligraphy is two dimensional while sculpture is three dimensional; one is from China and the other is originated in the West. It seems impossible for the two art genres to collide.

“But through this exhibition, we hope that the two could approach each other, breaking up the existing boundaries.”

Han admitted that when He first approached him with the idea, he was uncertain how the exhibition should be presented.

“But this is such an evoking subject, like throwing a question in front of every participating artist,” Han said.

“Should Chinese calligraphy be a stereotyped image under contemporary art language? Or how can sculpture, a Western art form, really touch the core of Chinese traditional culture?”

For example, artist Tan Xun’s “Qiqi’s Leaking Traces of the Room” could easily be ignored in the corner of the exhibition. It resembles a random ink splash and is actually made from black glass fiber.

The artist presents his interpretation of calligraphy and places it in ordinary observation.

Another highlight of the exhibition is Zhang Keduan’s “Telling my Father.” On first sight, the work looks like a plain, hued cloth hung on the wall. Yet, on closer inspection, the cloth is filled with Chinese characters stitched on it. Something written in a hidden way, just like the relationship between a Chinese father and son — implicit and untouchable.

Some calligraphy works at the exhibition, although created in salute to Chinese calligraphy masters, such as Yan Zhenqing (AD 709-784), already abandon the traditional calligraphy art form and appeal to a more contemporary concept. 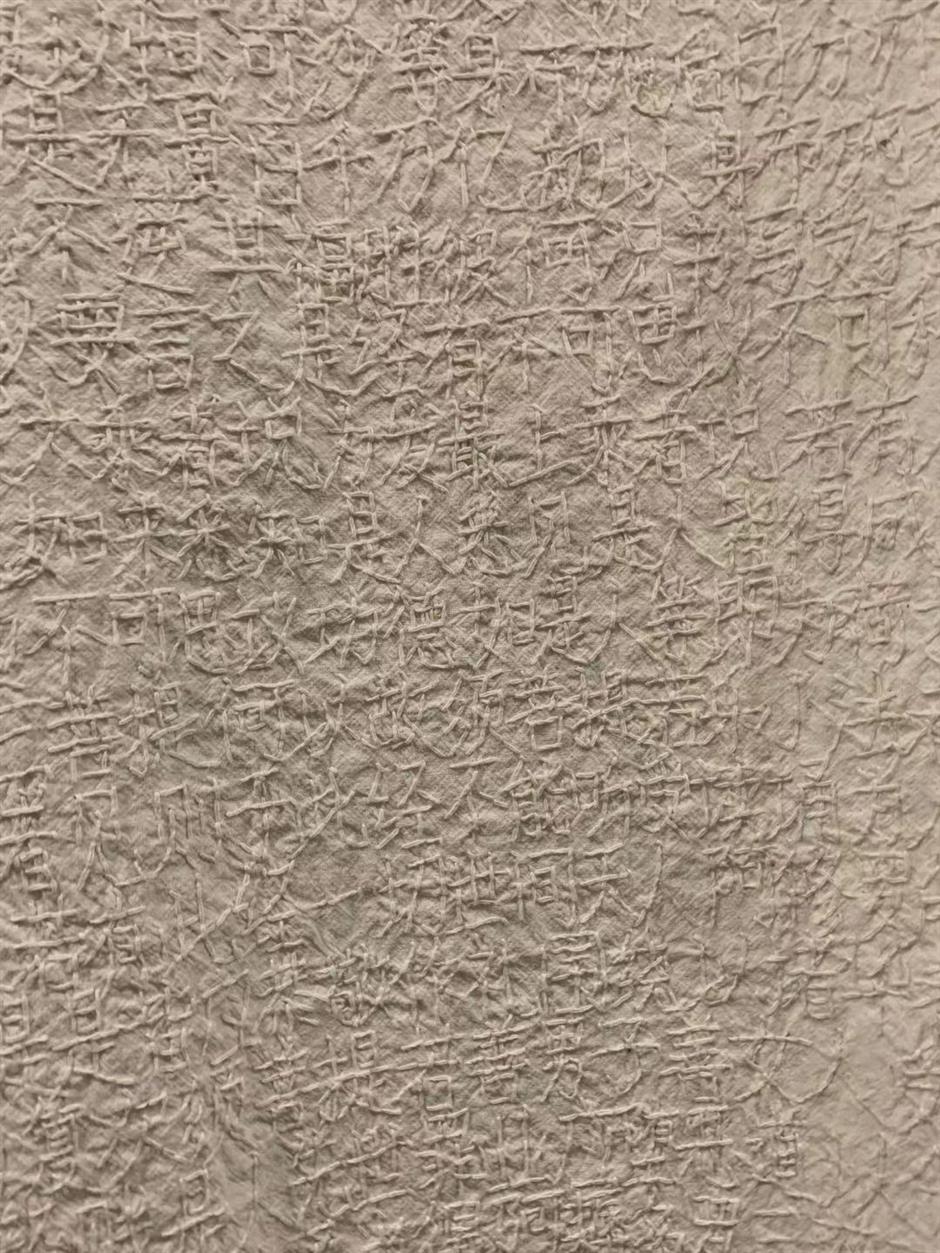