The artist known as “The Panda Man” has a special art project running at HOW Art Museum through March 14.

“Me & Beuys, Zhao Bandi’s Hut: A Noah’s Ark in the Post-Pandemic Era” discusses the topics of “helplessness, isolation and loneliness through the pandemic,” according to Zhao.

Stepping into the exhibition hall, visitors will encounter fallen bamboo leaves on the floor, Zhao Bandi’s Hut and the small utopian world he builds. A hammock in the shape of a mask is placed beside a rough shelter made of bamboo. The scene, according to Zhao, might be the “living traces of my previous life.” Here in this dimension, the boundary between art and reality is blurred; the rigid reality is permeated with an aesthetic and elegant ambience. 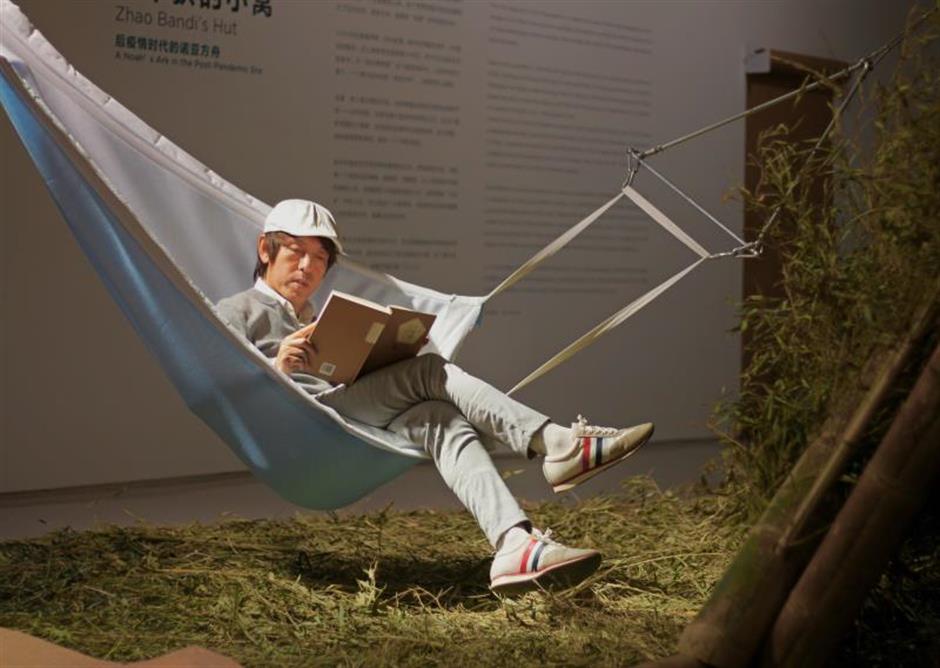 Artist Zhao Bandi sits reading in the hammock in the shape of a mask.

Born in 1966 in Beijing, where he now lives and works, Zhao graduated from the Central Academy of Fine Arts in 1988. Training as a painter though, he studied every nuance on solving painting challenges. Over the years, his practice has evolved to include performance, photography, fashion, films and art therapy.

Zhao belongs to a small group of artists who go outside their comfort zone. His spoofing, playful and rebellious creations, in the beginning, were not easily interpreted by the mainstream, even though today such style permeates in every corner of the online, offline illusionary world.

As one of China’s most active contemporary artists, he made his reputation with staged scenarios where he had his toy panda play out everyday situations. The panda is treated and acts as a “real” character with a voice of its own that appears as speech bubbles in photographs.

It is widely recognized that Zhao’s oil painting technique in China is ranked at the very top, yet he doesn’t choose to limit his role merely as an oil painter, or to be exact, a “producer” of paintings on canvas.

“Painting, at least for me, is a very personal and private thing,” he said. “I can’t thoroughly expose my inner world without concealing to the public. Some of my friends suggested I paint more. Of course I still paint, but it might only be a small proportion among all my artworks.”

The exhibition includes one small canvas created by Zhao, which is inspired by Joseph Beuys.

Zhao takes inspiration from the book “Decameron,” which unwittingly echoes with a scene from the past in a story written by Boccaccio Giovanni in the Italian Renaissance period. Sometimes they would have chats with the artist for hours, which in the eyes of the artist, is similar to a picnic or a small party.

Zhao has become quite famous for organizing parties in recent years. In 2016, he initiated a gathering under the theme of Frederic Chopin in the suburbs of Chengdu where a girl was playing Chopin by the lake. Later he also organized a “Picnic at the Guggenheim” where some of his guests performed ballet, modern jazz, read the poems and sang songs.

“I like organizing parties, as I always have whimsical ideas for parties,” he said. “I was invited to organize several parties in 2020 in different cities. But due to the epidemic situation, everything changed.”

Zhao also postponed his solo-exhibition, which ought to have been scheduled last year.

“I couldn’t display what I had created before the outbreak of coronavirus,” he said. “My mood is different, let alone my artworks.”

So when HOW Art Museum invited him to do a special project, Zhao immediately agreed.

“What I hope is to conjure up a surrealistic cradle, a confessional or a shelter to rescue one’s soul who might be ‘floating in the flood,’” he said. “I hope visitors might embark on this ark to escape this sinking world under this relaxed and poetic environment.” 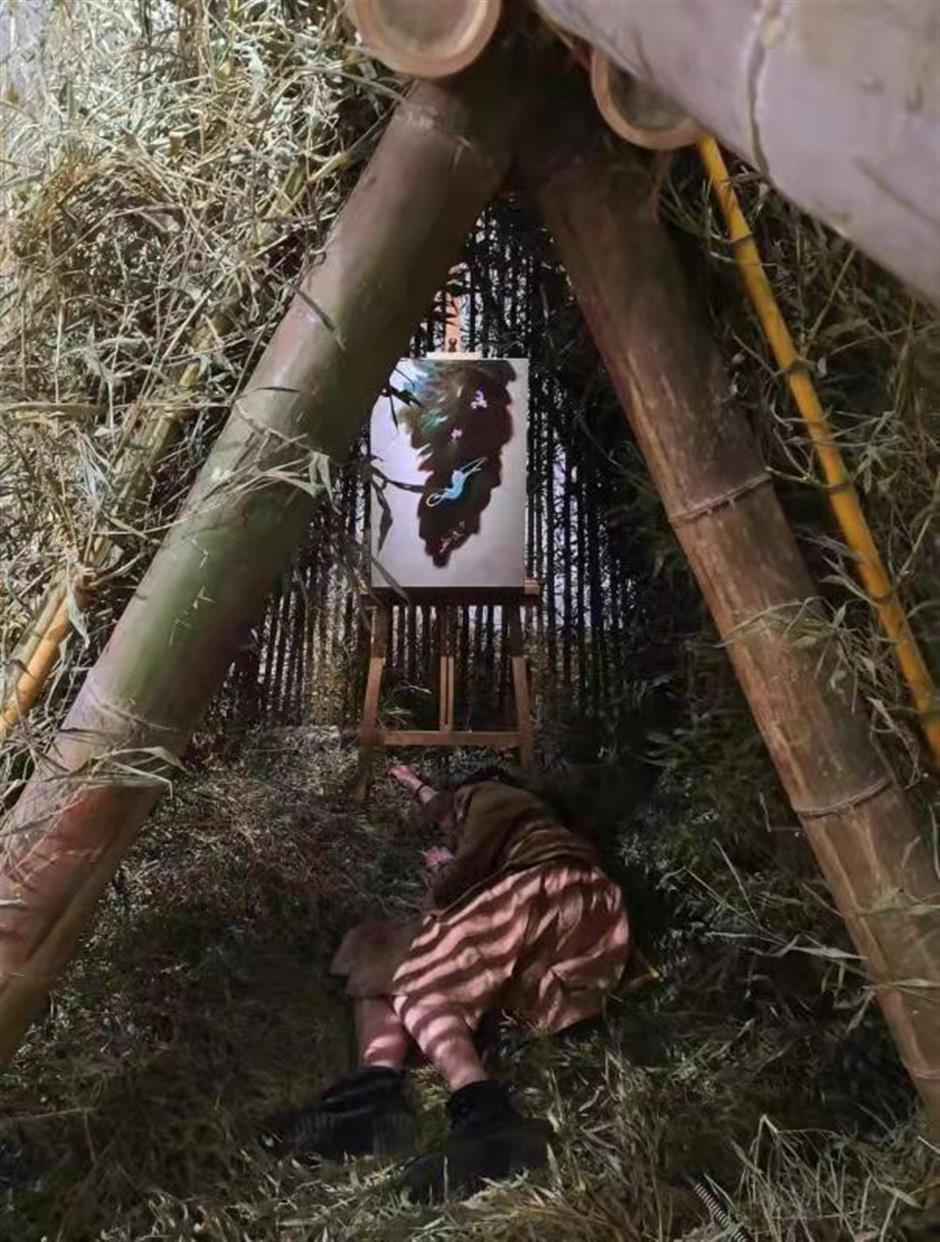 A visitor lies down inside Zhao Bandi’s Hut covered with fallen bamboo leaves for a moment of relief.

Q: Where were you since the outbreak of coronavirus?

A: I was in Singapore for almost half a year. It was not until June 2020 that I returned to China. Of course after a 14-day quarantine in Shanghai, I then flew back to my home in Beijing. At that time, all international flights stopped in Shanghai. It was an unforgettable experience in my life.

Q: Why does the title of the exhibition relate to Beuys?

A: Beuys was a leading German conceptual and performance artist. He fought in World War II and was injured in a plane crash in 1943, an experience that would feature heavily in his future artistic practice. He was later rescued by a roll of felt for warmth and a lump of animal fat for energy. Then animal fat and hair felt repeatedly appeared in his artworks to pursue the theme of hurt and cure, life and redemption.

I referred to the symbols of Beuys on my canvas, as we happen to be in almost the same scenario today.

Q: What’s relation between your painting and your party?

A: This might relate to two sides of me. In recent years, I have been passionate to create those boisterous parties. However, when I return to my studio, I sit quietly in front of my canvas and paint. You know why? I gradually become disappointed in the “truth” under the erosion of time, but instead, I care more about the “surface.”

At this moment, painting, like my old lover, comes to me again with a fresh look.

Q: You said that the “truth” might be unbearable, so is this show a kind of escape?

A: I do sometimes ask myself, when facing the current pandemic situation and the harsh reality, isn’t it a bit immortal that I insist on the pursuit of extreme beauty in my work?

Q: How about the chats with different groups in your hut?

A: All of them applied online to participate in the event. For example, some foreigners in Shanghai said that they felt lucky to be here, to gather for chats and drinks inside an art museum under such a relaxed environment.

We nearly talked about everything in life. At the beginning, I was a bit concerned, as Chinese people don’t feel so comfortable to expose themselves in front of strangers. But out of my surprise, they are so willing to talk and share.

Q: Is there any particular experience you encounter in this project?

A: Yes, one of the participants, a middle-aged lady, approached me for a private talk in my hut. She told me that she shied away mentioning this to any person for almost a year, as her son committed suicide in his dormitory a year ago. But when stepping into my hut, the place evoked something deep in her heart that she suddenly had the urge to talk to someone. She told me that her son was a sophomore at a local art academy, handsome and nice. She didn’t find any sign before his death, which was a strong shock to her world that she nearly collapsed. I am not a psychological consultant, but I am sure what she shared with me must have given her some emotional release.