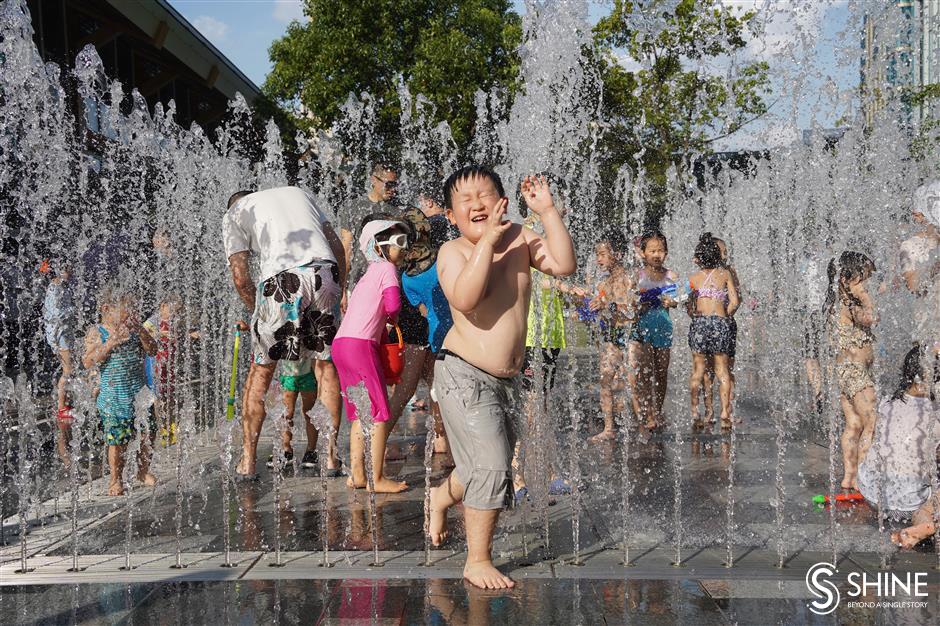 Kids have fun in the foutain outside Jing'an Kerry Center.

Since the city entered summer on May 30, it has reported 18 days with the mercury climbing over 35 degrees Celsius. The temperature hit 37 degrees on eight of those days, weather authorities said last Thursday. And there's no respite expected from these dog days in the near future.

But people have their own ways of chilling out.

A fountain outside Jing'an Kerry Center has become a popular destination for kids to splash around.

Wearing swimsuits and goggles, carrying buckets and water guns, they really have fun, as if they are in a Maldives resort paradise. What's better, it's totally free!

"Pocket parks" dotted on every corner of Jing'an offer another free option to hide from the scorching heat.

As the name suggests, "pocket parks" are mini parks tucked away on street corners, usually designed to include existing greenery.

The tree canopy offers natural shade against the sun, casts shadows and cools the air. The vivid kaleidoscope of colors and delicate floral arrangements offered are a wonderful antidote to a fractious mood. A woman walks in the "pocket garden" at the corner of Nanjing Road W. and Shimen No.1 Road to shade from the heat.

In Jing'an, every "pocket park" is unique, like the one at the intersection of Weihai Road and Shaanxi Road N., just opposite Shanghai Daily's office.

It features white and grey concrete flower beds, benches and corridors in an almost Nordic design based on minimalism and simplicity but with a stylish edge.

Ornamental grasses and vibrant clusters of blue and violet blossoms are planted to create a "blue" garden.

As dusk falls, LED lights in the style of reeds hidden among grasses and twigs are illuminated to blend with the silver moonlight, enveloping the park with a soft and tender ambience.

An aesthetically beautiful "pocket garden" prevails at the corner of Nanjing Road W and Shimen No.1 Road.

Surrounded by vertical green walls rising 5.5 meters, it is like a courtyard tucked into the concrete jungle.

The walls are covered with the vibrant colors of red geraniums, pink begonia, white baby's-breath and hardy blue-flowered leadwort. The flowers are arranged to meld with patterns on the façades of nearby historical buildings.

A carpet of pink muhly grass perfectly matches the lavender-colored, perforated aluminum panels erected as decoration. They are a nod to Italian painting master Giorgio Morandi, renowned for his muted colors and quiet simplicity.

A music-themed "pocket park" at the corner of Jiaozhou and Anyuan roads has its own name: Garden of Nature Sound.

True to its name, notes written on music staff are incorporated into the design of the park's walking paths and benches. Plus, an interactive installation formed by giant loudspeakers gives out sounds akin to birds singing, bells ringing and water flowing. 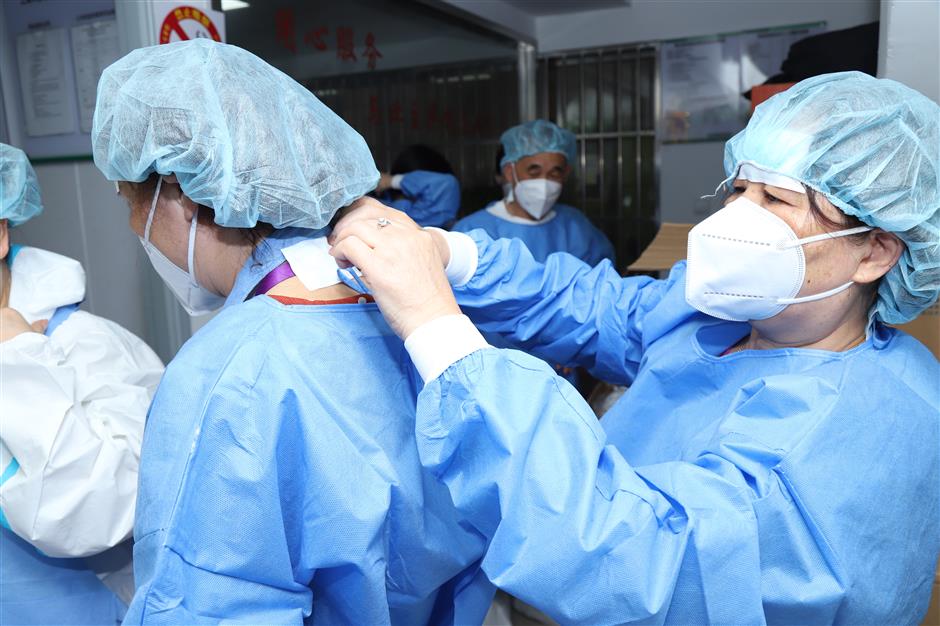 While most of us stay cool inside air-conditioned rooms or rest in the shade, outdoor workers spend endless hours under a scorching sun to ensure the city runs smoothly. For nucleic acid testing personnel, it's real tough.

Employers, authorities and subdistricts have stepped up their efforts to bring a touch of coolness.

A deliveryman, who wouldn't disclose his name, rushed to the service station for a rest, and glugged down a bottle of iced salted soda water after he had delivered nine parcels in one hour.

"I'm dying of thirst and melting with heat," he said. "This place is so great. I get free drinks and I felt refreshed," he said.

Though the mercury hit 40 degrees Celsius, nurse Zheng Jun was still wrapped in a thick protective outfit as she performed nucleic acid tests in the Zhijiang Road W Subdistrict neighborhood.

Zheng admitted that she and her colleagues had suffered acute sunstroke. After work, the sweat was pouring off her, literally. "I pour out sweat in my gloves and shoe covers," she said.

Thankfully, in recent days, the subdistrict prepared giant ice cubes and misting fans to cool the surroundings. "I feel much better now," she said, adding that she's been very moved by local residents who often come to say thank you.