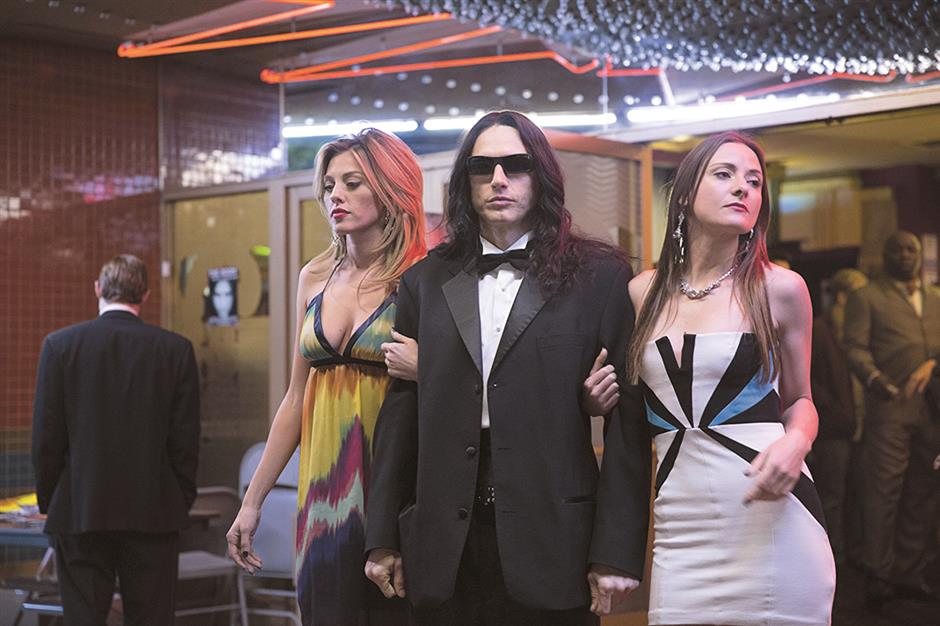 James Franco in "The Disaster Artist"

Who is Tommy Wiseau? It’s a question that has long befuddled and endlessly amused fans of “The Room,” the infamously bad 2013 movie Wiseau directed, self-financed and starred in. Where did this billboard-self-promoting, Terminator-sunglasses-wearing Frozen Caveman Lawyer knockoff come from?

How old is he? And where did he get his apparent wealth? (The movie cost US$6 million to make, partly because Wiseau insisted on shooting on both 35mm film and digital.)

A quick recap for the uninitiated. “The Room” ran for two weeks in Los Angeles and was roundly panned as a singularly terrible movie. But it found a “Rocky Horror Picture Show”-sized cult, with sold-out midnight screenings that continue to run. Devotees thrilled to the movie’s cheesy filmmaking, its strange, woeful imitation of Tennessee Williams dialogue, its bizarre narrative incongruities and its proliferation of spoons throughout (which fans bring to throw at screenings).

Wiseau’s friend and co-star Greg Sestero later wrote the 2013 book, with author Tom Bissell, titled “The Disaster Artist” about the inept making of the movie — framing the film as a nuttier version of classic Hollywood tales like “Sunset Boulevard.” Franco, himself, reviewed the book, concluding that Wiseau wasn’t just a punchline but was an outlandish version of every fumbling aspirant to Hollywood. “In so many ways, Tommy c’est moi,” wrote Franco.

To be sure, “The Disaster Artist,” which is based on Sestero and Bissell’s book, will appeal most to fans of “The Room.” Much of it plays like a prequel. Our first, immediately recognizable shot of Tommy (Franco with a long, jet-black mane) is in silhouette, as if John Wayne is making his entrance. He and Sestero meet at acting class, start reading lines together and are soon headed to Los Angeles to make it big.

Wiseau is far from an outlier in having misbegotten, even demented delusions of fame. He’s kind of a tragic figure, an immigrant trying to hide his past while making what he hopes will be an “all-American” movie.

And large swaths of “The Disaster Artist” play off the joke of a hapless goon trying to cast himself as James Dean. As a movie about Wiseau, “The Disaster Artist” isn’t very good. He remains a mystery throughout. Aside from a spot-on, “SNL”-ready impression of Wiseau, there’s just not much here besides a loose jumble of recreations and allusions to “The Room.” (For a testament to the art of failure, see Tim Burton’s “Ed Wood.”)

Yet as a movie about James Franco, “The Disaster Artist” is a smash hit. Franco populates the film with friends and comedians, from Jason Mantzoukas to Seth Rogen (also a producer). Franco’s brother, Dave, stars as Sestero, making the homoerotic bromance between the characters an outright lark. It’s not a coincidence that the big-name producer Tommy awkwardly approaches at a restaurant is played by Judd Apatow, who gave Franco his first break on “Freaks and Geeks” nearly two decades ago.

The 39-year-old Franco, who has now directed 18 movies, has long been drawn to all things meta, and, on that score, “The Disaster Artist” is his piece de resistance.

There’s something joyful about the Franco brothers playing a fun-house mirror version of their own Hollywood arrival, and the film’s best scenes are with Rogen’s production manager, aghast at Tommy’s incompetence.

When Tommy introduces “The Room” at its premiere, Franco might as well be speaking for himself.