At the cutting edge of curbside vocations

Huang Lanfang, 88, is still doing haircuts on the street at an age when most people have long retired.

Every morning she takes her barbering tools to the gate of the lane where she lives, selling calendars and gloves as a sideline while waiting for customers. And in the afternoon, she gathers up her tools and bicycles to nearby Anren Street in Huangpu District, where she sets up business again.

The only times she takes days off is during bad weather.

On Anren Street, her hair-cutting stall sits at the wall of Yuyuan Garden. A mirror hung on a telephone pole allows patrons to see their new hair styles, while a wiring board linked to a nearby house provides power for her electric clippers. 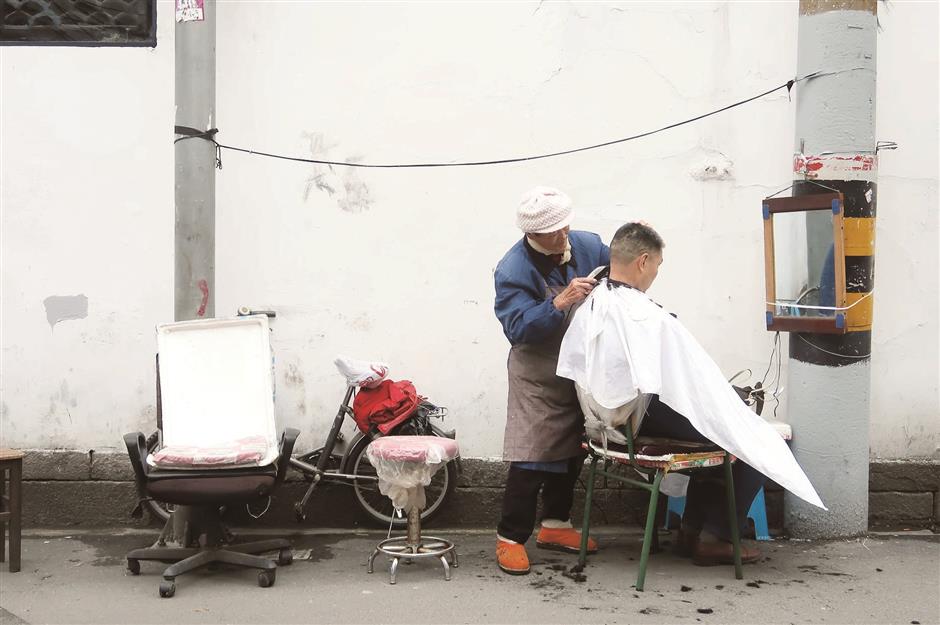 Huang Lanfang cuts hair on Anren Street near Yuyuan Garden. Her little business has been going for decades.

All her tools — two clippers, several scissors, brushes and scrappers — show the wear of decades.

Huang admits her business doesn’t “flourish,” but she says she enjoys what she has been doing for about half a century. Despite the loss of part of her left ring finger because of an accident years ago, her hands still deftly get the work done.

Most of her customers are men who want a neat, short hairstyle.

“This is a sightseeing area,” she says, “so my customers are from different places. Occasionally, there are foreigners, too, who are mostly curious of my business here.”

It’s true. Tourists from both home and abroad often stop to take a photo of this elderly street barber.

Huang says she started in the business in the early 1960s, when street barbers were much more common. Born in Qidong in Jiangsu Province, she came to Shanghai with her husband and three daughters. At that time, her husband, now long dead, was a driver for a transport company. His pay wasn’t adequate to support a big family, so Huang needed to supplement had their income.

She never attended school. She can’t read or write, not even her own name. But she was willing to work at any job she could find.

“I once worked for a machinery factory,” she says. “Nearly all my colleagues were men, and I think my personality was affected by their influence. I took up smoking like they did, and I have never quit.”

When jobs dried up, Huang became desperate and begged a local barber to teach her how to cut hair.

“All I could think of were the three young daughters I had to feed,” she says. “I had to grasp any chance I saw. Fortunately, the barber agreed.” 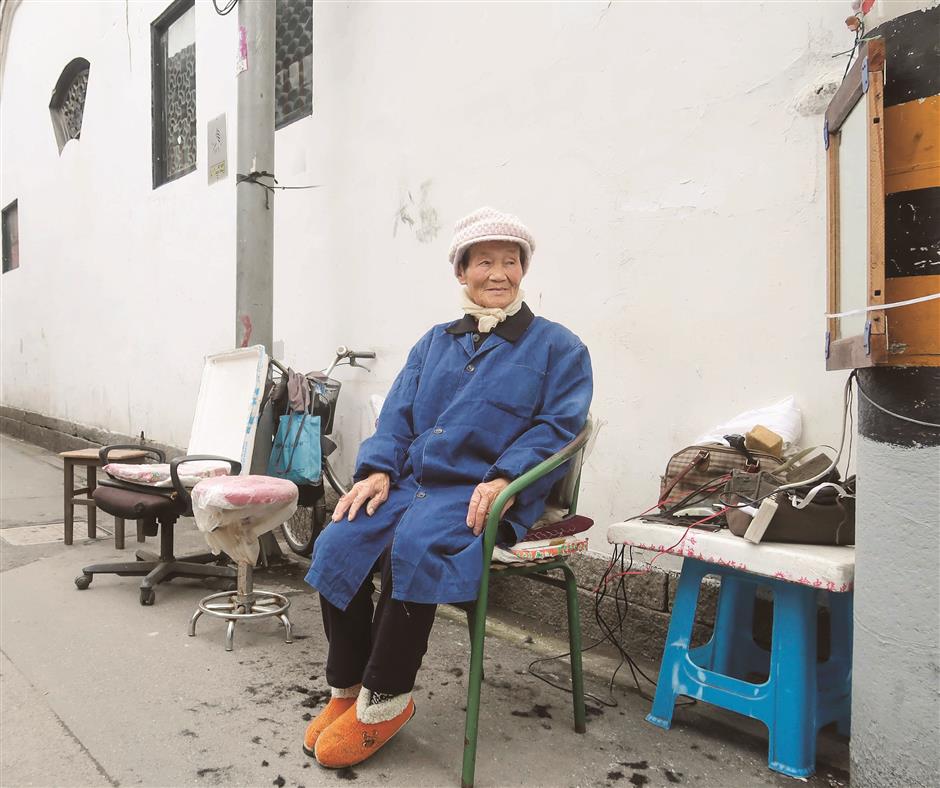 Wang with her decades-old barbering stall

When she set up her first barbering stall, local “market management” authorities tried to shut it down 14 times. She asked her mentor what to do, and the barber told her to conduct business as a street vendor to circumvent regulations.

In the beginning, she walked through neighborhoods, asking passers-by if they wanted a haircut.

“It was really difficult to be a woman barber at that time,” Huang says. “Most people were superstitious about being touched on the head by a woman. They believed it was inauspicious. People gave me disapproving looks, and children made fun of me.”

Huang remembers the little boy who sneered at her and shouted, “How can someone like you to be a barber?” It drove her to tears. Her mentor told her to buck up and carry on.

“He said people like me have to be ‘cheeky’ and not care what people say,” she recalls.

So Huang developed a thick skin. As she began to gain customers, her confidence rose, her skills improved and she started to earn a local reputation.

Huang never moved out of the area around Yuyuan. She lived through the death of her husband, the marriages of her daughters, the advent of grandchildren and the development of the area from a popular small garden to a world-renowned sightseeing spot.

Urban management officials no longer bothered her. In fact, local neighborhood committees engaged her to give free haircuts to local seniors.

“The neighborhood committee would pay me upfront and distribute coupons to seniors,” she says. “I was happy to help people more my age.” 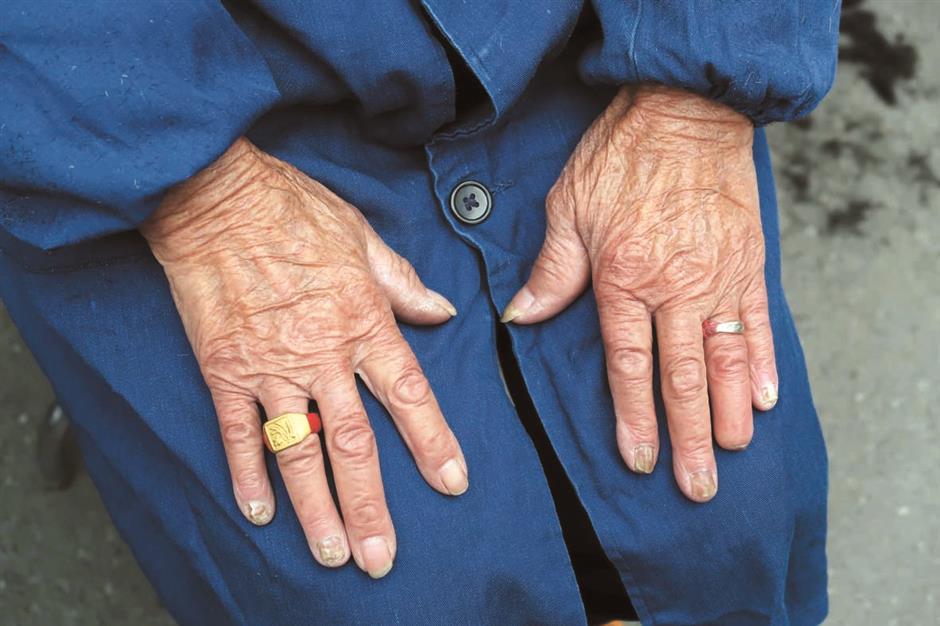 Huang lost part of her left ring finger in an accident, but that doesn’t affect her haircutting skills.

Huang’s business is also her social life. When there are no customers, she takes a smoke break and chats with retired people living in the neighborhood across the street.

“Through her, I believe that happiness is the key to health and longevity,” says a regular customer surnamed Wang. “She is always cheerful and is never content to just stay at home like so many seniors do. That’s what gives her such good energy.”

Huang says she never thought of retiring. She is healthy and her mind is ever sharp. She is able to look after herself. Though she lives alone, she never feels lonely.

“My son-in-law is a good cook, and he sends me some meals every week,” she says.

Even strangers warm her spirits. Like the “young girl photographer” who took photos of her one day.

“She promised to send me the pictures she took, but I didn’t really take her seriously,” Huang says. “But she came through and did send me the photos. They are beautiful. She’s a very good person.”

Special Reports
ADVERTISEMENT
61827
,
61768
,
61844
,
Guide for overseas Chinese students during COVID-19 pandemic
A cemetery that celebrates life and death
Nile threatened by waste, warming, dam
Enchanting abode in idyllic tranquility
Connecting nature, culture and people with design
Fancy footwork: An embroiderer finds her niche
How overseas Shanghainese go through outbreak
Counseling eases psychological toll of outbreak
'Support troops' guard the doors to the city
A guardian of the light ... and of hope for Wuhan
EXPLORE SHINE