Finding comfort from chaos through caring

On Life And Death
Directed by Dai Qian. Shot by Zhou Shengjie. Edited by Zhong Youyang. Subtitles by Wang Xinzhou and Andy Boreham.

The life of Chen Xingyu almost reads like a movie script or a novel: full of tragedy, melodrama and heartache — and there is a happy ending.

The 47-year-old Shanghainese woman lost 10 million yuan from a business venture, became seriously ill and estranged from her family for marrying a man she loved and having a daughter out of wedlock. Yet Chen did find peace and comfort from the tumult and chaos of her life through others as a hospice care volunteer.

Chen bowed her head and whispered, “I love you, granny” to a 78-year-old woman on her deathbed.

“It was the first time I met Granny Cheng as a hospice care volunteer,” she said. “I did not expect that when I touched her head with mine. She opened her eyes, smiled and raised her head to rub against mine. We did this for half-an-hour.

“Granny Cheng smiled like an infant. It was at that moment I got a deeper understanding and contemplation of life and the world around us.”

Chen’s colleague in the hospice ward, Chen Ziyou from Shenzhen, played a soothing Chinese song from his mobile phone when he witnessed the connection between the pair.

“They looked just like two flowers quietly blooming in the room,” Ziyou said.

Chen revealed she was attracted to a new career in hospice care because of love and companionship. 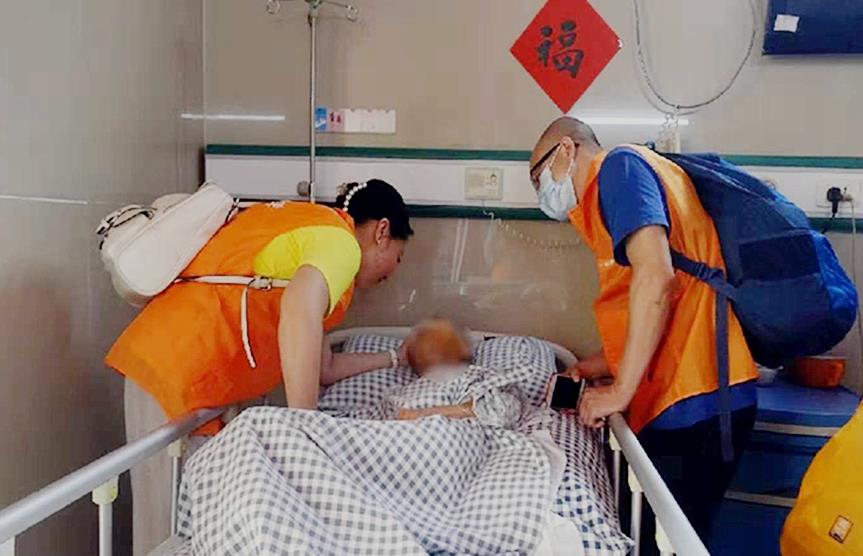 Born in 1973, Chen was an only child and spoilt by her parents and four grandparents. But she became estranged from her family when she dropped out of college to have a baby girl, Xie Yunfei, with a man, Xie Guofa, she fell in love with and later married.

Chen later became ill, her weight spiraled out of control from 48 kilograms to 84kg because she was unhappy and suffered from mental depression following a failed 10 million yuan business investment.

She reached out for psychological help. Her consultant advised her to study psychology for further understanding of her illness, which she did, and Chen later became a psychological consultant herself. But it did not last because of her failed financial investment.

“With financial hardship, I could not see any hope,” said Chen.

To find further comfort and a cure from her ills she threw herself into a project to rebuild Xifeng Temple, a Buddhist temple which dates back to AD 860 in the Tang Dynasty (AD 618-907), in Fujian Province.

“I felt deserted and weak. I didn’t think I could ever stand up again until I met Fang,” said Chen.

Fang Shugong, a former aerospace engineer, established the Shifangyuan Elderly Hospice and Mind Care Center in 2011 with nine other volunteers. It has provided compassionate care for nearly 40 million old people in China.

“Every life needs to be protected, so we don’t make any analysis, judgment or definition of them. We care for them and we offer companionship with routine chores,” Fang said.

When Chen met Fang at a hospice care forum in Shanghai in 2017, his words deeply touched her.

“I felt accepted and understood,” Chen said, as tears welled in her eyes. “Fang hugged me and said, ‘Welcome aboard.’”

With his support, Chen visited 10 more Shifangyuan hospices in several Chinese cities such as Wuhan, Xiamen, Guangzhou and Changsha. 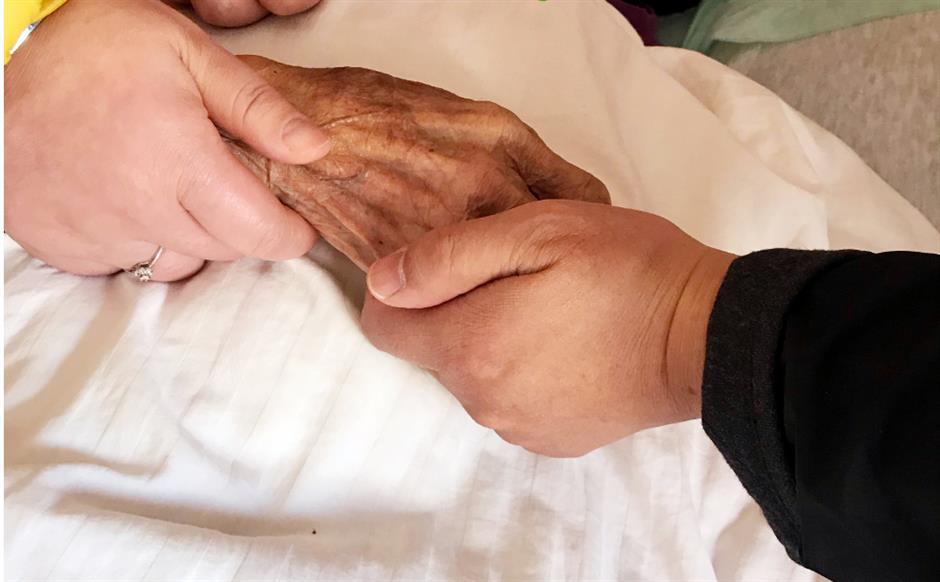 Holding the patient’s hand is an important approach in hospice care.

She learned that Shifangyuan volunteers are ranked from one to five stars according to their service time and expertise. The higher the star, the more experience you have.

In February 2018, Chen became a three-star volunteer in Shanghai Shifangyuan. Today she is a four-star manager, who has trained thousands of volunteers under her charge.

Mother Teresa, the world-famous nun, who won a Nobel Peace Prize, once said: “I have found a paradox that if I love until it hurts, then there is no hurt, but only more love.”

The love and pain paradox resonates powerfully within Chen, who feels more love by volunteering. Her colleagues feel the same way.

Chang Shuping, a cleaner from Heilongjiang Province, who has lived in Shanghai for 15 years, has been volunteering since 2018. Her daughter, Zhao Jingyi, joined her as an 11-year-old and became the youngest volunteer in Shanghai Shifangyuan.

“I’m happy to be a volunteer. By serving my time and labor I forget all the unhappiness. And I also enjoy a better relationship with my husband. He helps with the family chores so I can look after the elderly,” Chang said. “My daughter loves the training courses for volunteers. She likes to be there as an assistant.”

The 55-year-old said she found the meaning of life in helping others.

“I can feel myself growing up with volunteering,” she said.

“My grandma has Alzheimer’s disease. She is almost dying,” Chen Min said. “But after a 40-minute online talk, I felt a change in my grandma. She even sang a children’s nursery rhyme.”

“I don’t know how long my grandma will live and how much she remembers. But this was a good memory for me,” she said.

To Chen, volunteering is the one of the most rewarding things she has done in her life and hopes more youngsters will volunteer because, “I believe a life cares for a life and that is the lifestyle.”

She is now at peace with herself and lives happily with her husband and was pleased when her 25-year-old daughter recently married.

Chen’s story may not be a fairy tale but it shows that, if you do have faith and care for others, you can find happiness. 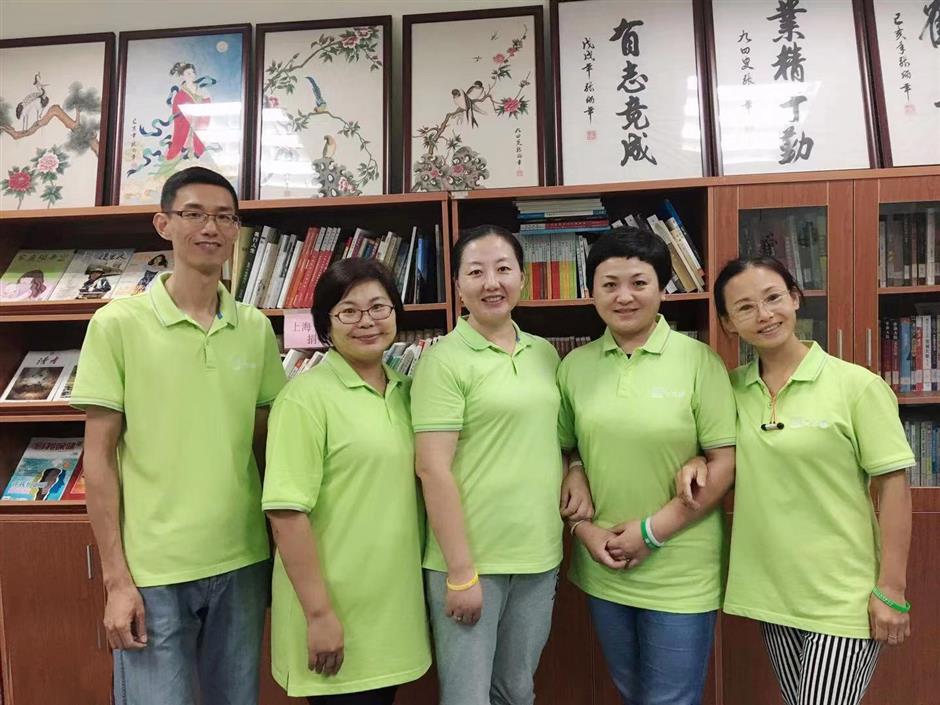 Chen Xingyu (center) with colleagues from the managing team, including Chen Min (second from right) and Chang Shuping (far right).

Q: You've been a hospice care volunteer for three years, can you share with us the biggest change, before and after?

A: I think I used to worry about small trifling things before and was maybe a little selfish. But now, after accompanying so many elders, I have grown and can face life's difficulties with my family better. I feel the power of love and freedom of my life. I have energy in living. I can put many things down and live a fulfilled life. My parents also changed.

Q: Can you give me an example?

A: I could never talk about death with my father. He would shouting abuse as if I was cursing him. But a couple days ago, I did it, spontaneously.

My father wanted to buy a camper van and was rejected by my mother. I said to him: "Dad, I think you'd better buy one, because I think your time in life is limited." He was affected by what I said, and said: "I'm happy to hear you say that today. I don't know how much time I have left, I'm lonely and I need you. "

A camper van made me realize that people need to cherish life.

For three years, I did not reach out to my parents, but I always wrote what I did onto my WeChat moments. I wrote specially for my parents, to let them know their daughter is happy and doing well.

Three years ago, my father was not happy with my job. He said, "Why do you work with the dying?" But now, my parents admit I had a higher spirit than them.

Q: So what's your answer on understanding the meaning of life?

A: The meaning of life to me is living in the moment. I do not have many expectations now but live a happy life everyday. I enjoy growing within myself and have more energy in my life.

Q: What's your next goal?

A: Our Shifangyuan hospice has servicing spots in three Shanghai districts, and I want to bring our services into the whole Shanghai within ten years. We have a remote service now, and we'd like to invite more families in China to join us.

We all hope that “life cares for life” can be a lifestyle. Through this, busy families can gather and gain more love and companionship.

Q: What about your own life goals?

A: To me, I hope more younger people will join Shifangyuan and I can resign from the leading post.

Now my father has ordered camper van, he said he could print our QR code on the van's body. He wanted to do We-Media and it would be fun posting our family news into that platform. I accept all that he wants to do. I just want to accompany my parents. Now we have remote services, I do not need to stay in Shanghai. I can accompany my parents touring, and at the same time, continuing my volunteering career online.