Lip-smackin' good! Where crayfish lovers turn up at night

Have you ever experienced Shanghai at four in the morning? Yu Lijiang does — almost every day. That’s the hour when he shuts the doors of his midnight diner and sets off to buy fresh supplies.

Yu has been running Junjun Seafood & Barbeque in the Sanlin area of the Pudong New Area for 10 years. His shop is probably one of the oldest of its kind in Shanghai, specializing in crayfish soup in summer and hotpot in winter.

From outward appearances, it’s just another shop in the city. Its 150 square meters comprise an open kitchen, about 10 tables and a private room. Posters on the wall regale the high quality of its crayfish.

“When I took over the shop, it was a barbeque stall in terrible condition,” 38-year-old Yu says, with a boyish, timid smile.

The shop’s 10th anniversary this year has been marred by the coronavirus epidemic. Junjun was shuttered for more than a month. After it reopened in early March, customers were few and business relied on takeaway orders.

“The pressure was so great that my wife and I considered closing down the business completely,” Yu says. “But the shop is like my child, and I just couldn’t give it up that easily. Fortunately, customers began returning in April. Now, with the arrival of the crayfish season, business is basically back to normal — though it’s still not as good as before the epidemic, of course.” 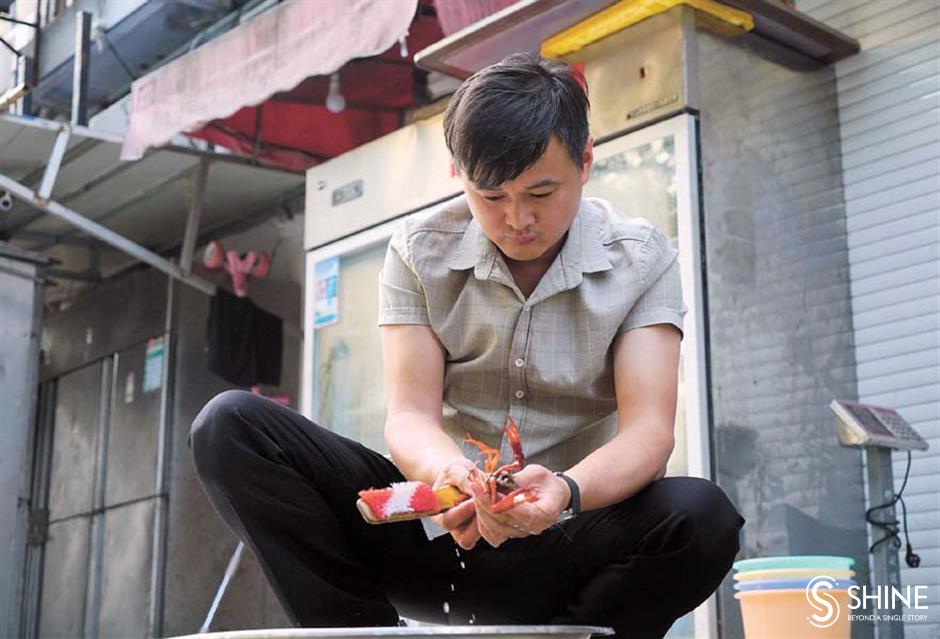 Yu Lijiang washes crayfish. As the coronavirus epidemic pared staff numbers, Yu has had to take on more of the work himself.

“Normal” means Junjun opening at about 3pm every day and closing between 3am and 4am. Yu’s staff numbers have been whittled back, leaving him to cover most of the work himself. That’s what puts him on the street at four in the morning.

“I usually ride my moped to the crayfish market 40 minutes away,” he says. “After coming back with the crayfish, I go to a grocery wholesale market, a 20-minute ride, to get vegetables, meat and other seafood.”

The crayfish market is always wet and muddy. Being even a few minutes late can mean Yu won’t get the freshest products.

“People in this business all go out early, and the market is always crowded,” he says.

He finally gets home around 9am. After five hours of sleep, a new business day begins.

Yu has been a “night person” since he left his hometown in Anhui Province and came to Shanghai at age 15, with only a third-grade education.

Initially, he helped a relative run a barbeque booth and slept outdoors in a lane for a year. It is a period he remembers with some bitterness.

His luck changed when he encountered a customer who owned a nightclub.

“He visited our booth every week and talked with me while eating a mutton kebab,” Yu says. “He asked me a lot of questions, and one day, he asked if I wanted to work at his place.”

With a starting salary of 3,500 yuan (US$495) a month and the prospect of a roof over his head, Yu didn’t hesitate to take up the offer. He worked at the club for a decade, with his monthly salary eventually rising to 26,000 yuan.

With money saved up, he decided to start his own eatery.

The diner had its ups and downs. In the first year, Yu lost about 1 million yuan due to lack of business experience. He decided that he had to learn from more experienced people if his business were to succeed.

Yu visited Xuyi, a county in neighboring Jiangsu Province known for its crayfish dishes. It was the birthplace of the dish shisanxiang, or crayfish seasoned with 13 spices, which now prevails in Shanghai.

After tasting the Xuyi local specialty, Yu asked a chef to teach him how to make it. He spent a month learning the culinary secrets before returning to Shanghai, where he redecorated his diner and started business anew.

“I had the first open kitchen on the entire street so that my customers could see how fresh my crayfish was,” he says. “I had a recipe so that every seasoning was perfectly blended. No one could complain that the crayfish this week was not as tasty as last week. I also introduced mutton from Shanghai’s Chongming Island to expand the menu.”

The high quality of his food attracted people. Workers in a nearby construction materials market, owners of local hardware stores and mechanics at automotive repair shops became loyal customers.

At night, people leaving nightclubs came by for a snack. During peak seasons, Yu filled as many as 20 tables outdoors. His diner became the liveliest night spot on the street.

Customers gradually became friends. The diner was the hub of a small night-time community.

Yu recalls how, in 2016 during the European Football Championship, a table of soccer gamblers made trouble late at night in the diner. One punter claimed that the diner’s TV set “had a delay” in the live broadcasts, causing him a big loss. He roughed up Yu’s wife when she served him.

“I was out at the time,” Yu said. “Other customers — most of them frequent patrons — fought the man. One woman sent my wife to the hospital and waited with her there until I arrived.”

Most markets in the area were moved or demolished by urban renewal in 2018. The little night-time community was scattered to all corners of the city. But even today, many of the old customers reassemble at the diner every week to eat crayfish and socialize with Yu.

As the old community broke up, a new one formed. Local residents living nearby became regular customers, and Yu adjusted his menu to their tastes.

“Where we once did more barbeque than crayfish because that’s what people from outside Shanghai preferred, the locals are crazy about crayfish, so that’s our signature dish,” he says. “I also added Shanghai cuisine to the menu.”

Yu, now the father of a son and daughter, still faces ups and downs. He lost almost all his savings last year on a branch of the diner he tried to develop in Minhang District.

“A gang of hooligans smashed my diner one night,” he says. “A lawsuit is still pending and I am not sure how or when it will be resolved. But my friends and old customers, including the nightclub manager who offered me the first job, all remind me that if I am well, all is well. Money comes and money goes. I can always earn the money back.”

Yu hasn’t given up on the dream of developing a diner chain.

“I’m thinking of my hometown in Anhui,” he says. “Maybe I could start a branch there.”