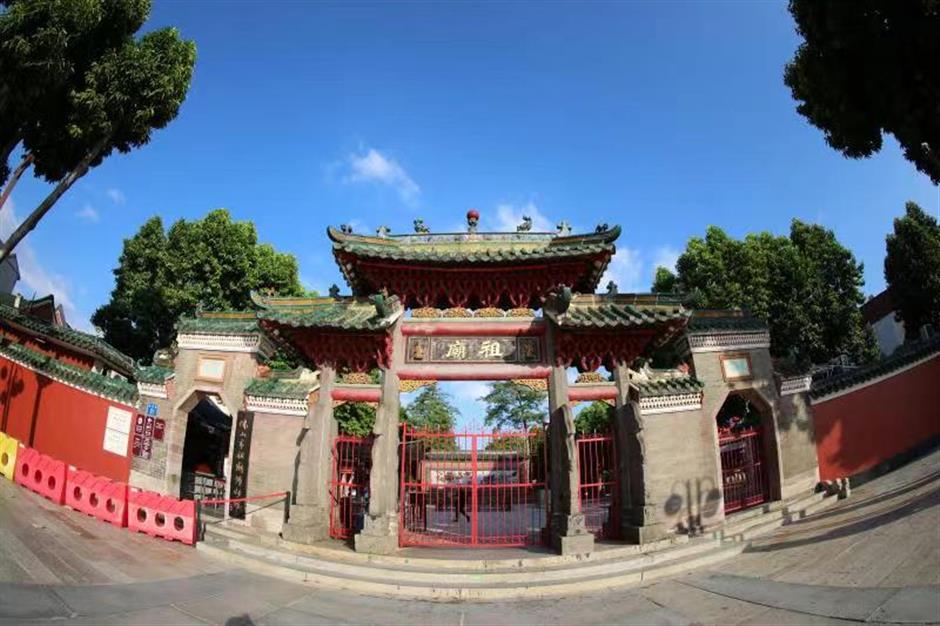 The Ancestral Temple serves as a connection site for almost every part of Foshan locals' lives.

Built between 1078 and 1085, the temple was a religious shrine to worship the Taoism immortal Zhenwu Emperor, who tamed floods. Since then, oddly, there have been no big floods in the city. In Cantonese culture, water is always an emblem of wealth. Therefore, worship of the emperor is a centuries-old folk tradition across the Pearl River Delta that carries wishes of good weather and fortune.

Lingying Memorial Archway is an important part of the temple, created in 1451. As its name was given by the Jingtai Emperor (1428-1457), the three-story, brick-and-stone archway includes a touch of solemnity and royalty, featuring giant columns and large dougong (a system of brackets inserted between the top of a column and a crossbeam).

The gold-glittering board name "Lingying" echoes the vermilion wooden pillars that support the bright green glazed tile roof. Firm in structure, the construction once withstood a 12-grade typhoon (41.4m/s).

Jinxiang Pond in front of the archway was excavated in 1513, featuring a stone sculpture with a turtle's body and snake's tail – the embodiment of the Zhenwu Emperor. It's an unofficial custom that visitors pray for wealth by throwing coins into the pond.

The beautifully wood-carved Wanfu Stage is the oldest, most intact and best preserved opera stage in south China, dating back more than 300 years. Two meters high, the stage extends with two long porches all the way to the archway, which forms a natural stereo surround-sound system to produce an optimal acoustic effect.

It has been an unwritten rule since the Qing Dynasty (1644-1911) that the first performance of a Cantonese Opera troupe must take place on the Wanfu Stage before touring to other towns, which was believed to bring good luck. The stage is still functional today, with performances on weeknights and all day at weekends.

Carving subjects vary from flora and fauna to mythology and historic events. One wooden board vividly tells the story of Jing Ke assassinating Ying Zheng (259-210 BC), an emperor during the Qin Dynasty (221-207 BC), China's first unified empire.

The memorial hall for Huang Feihong (1847–1924), a martial artist, physician and folk hero born in Foshan, sits in the northern part of the temple. His life story has been adapted to numerous kung fu films and television series.

He was considered an expert in the Hung Ga style of Chinese martial arts and a man of integrity, helping people fight injustice.

As a physician, Huang practiced and taught acupuncture and other forms of traditional Chinese medicine in Po Chi Lam, a medical clinic in Guangzhou, Guangdong Province.

The hall has the only portrait photo of Huang, which attracts steady flows of visitors who come to take a snapshot with the kung fu master. Po Chi Lam has been restored based on a scene from the 1991 film "Once Upon a Time in China."

Martial arts performances take place every day, performed by Huang's descendants and students in the big central arena. His fans can immerse themselves in classic films and documentaries about the great man.

The hall has a collection of more than 1,000 items and relics Huang once used, nearly 100 films and kung fu shows and serves as a spiritual home for 380,000 of his followers all over the world.

The Ancestral Temple connects almost every part of Foshan locals' lives. Newlywed couples come to pray for a happy marriage, students for academic success and businessmen for good investments.

﻿
Special Reports
﻿
61865
,
Iconic temple in Foshan's history
A quest to understand world around us
Brazil Coffee Nation Day to celebrate coffee culture
What to do during a 48-hour lockdown in the office?
Seeking something deeper to create the new and unexpected
A place to create memories and feel safe
China's first Muji Fresh Market is the real deal for healthy foods and delicacies
New landmark in West Hongqiao announces 2022 opening plans
Explore the city's second and largest Tsutaya Books
Installation art takes Xintiandi into space
EXPLORE SHINE