New experience in many flavors

Editor's note: Ancient Ways is a series profiling the Chinese lifestyle and the people’s way of eating and drinking through literary texts, from the four great classical novels to ancient recipe books.

Yunnan, the southwestern land of abundant produce and vibrant culture, has one of the most unique cuisines in China and loved by people all over the country. From the exceptionally light and umami chicken soup to spicy grilled fish, the comprehensive techniques and flavor profile of Yunnan cooking has something for everyone.

Louis Cha, the Chinese martial arts writer widely known by his pen name of Jin Yong, highlighted Yunnan cuisine in irresistible language in his novel “The Deer and the Cauldron.”

Wei Xiaobao, the protagonist in the story who climbed his way into the imperial palace and befriended young Emperor Kangxi of the Qing Dynasty, once asked the imperial kitchen to prepare Yunnan delicacies for Mu Jianping, the youngest and most naive of Wei’s seven wives who was from Yunnan.

The dishes Cha wrote about included Xuanwei ham that’s stewed with candied fruit and lotus seeds, stir-fried dried fish from Erhai and the famous steam pot chicken. The meal was paired with pu’er tea from Yunnan as well.

As a more ethnic cuisine, classic Yunnan dishes are diverse in terms of ingredients and seasoning. The cuisine is not just about one specific flavor, but compound flavors that create a new experience. 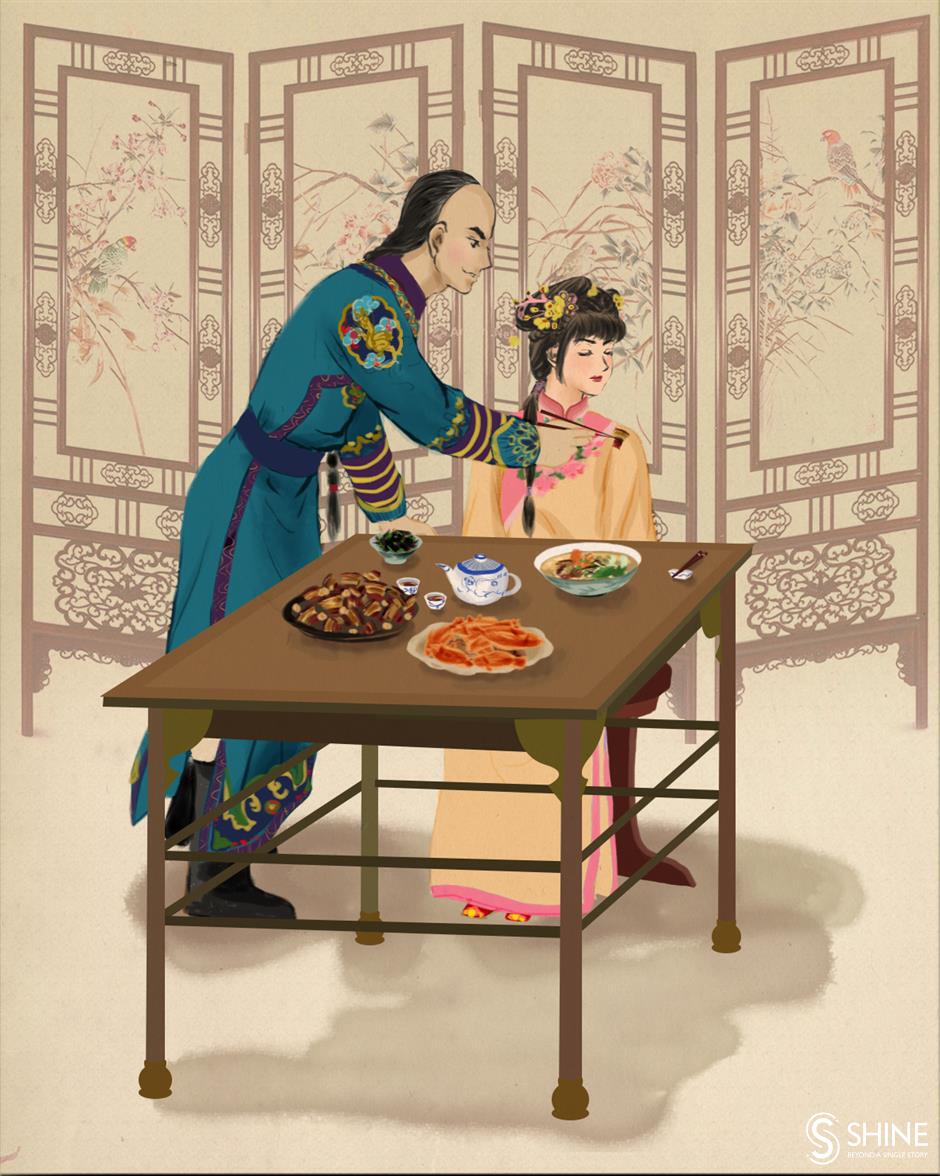 Wei Xiaobao, the protagonist in Louis Cha’s “The Deer and the Cauldron,” asked the imperial palace kitchen to prepare Yunnan dishes for Mu Jianping.

Diversity: from mushrooms to insects

Yunnan is best known for the wild mushrooms that are best in the period from July to October, especially the pricier ones such as boletus, matsutake and termite mushrooms.

The mushrooms mostly come from the remote mountain forests in Yunnan where the climate is favorable for the growth of the delicate fungi.

One can find more than 200 species of edible mushroom in the southwestern province and thanks to advanced logistics, restaurants and supermarkets in Shanghai are able to enjoy fresh deliveries of mushrooms at more affordable prices than before.

In Yunnan, the ultimate way to enjoy mushrooms in the summer to early fall season is mushroom hotpot, which easily serves a dozen types of wild mushrooms cooked in delicious chicken soup or mushroom soup.

As for the highly valued matsutake mushroom, fresh harvests are eaten raw or lightly sauteed with some butter.

Steam pot chicken is a super light dish in Yunnan cuisine that steams fresh chicken in a special steam pot to produce a clear and flavorful chicken soup.

The sealed vessel can preserve the original flavor of the chicken and only minimum seasoning such as salt and ginger are used. 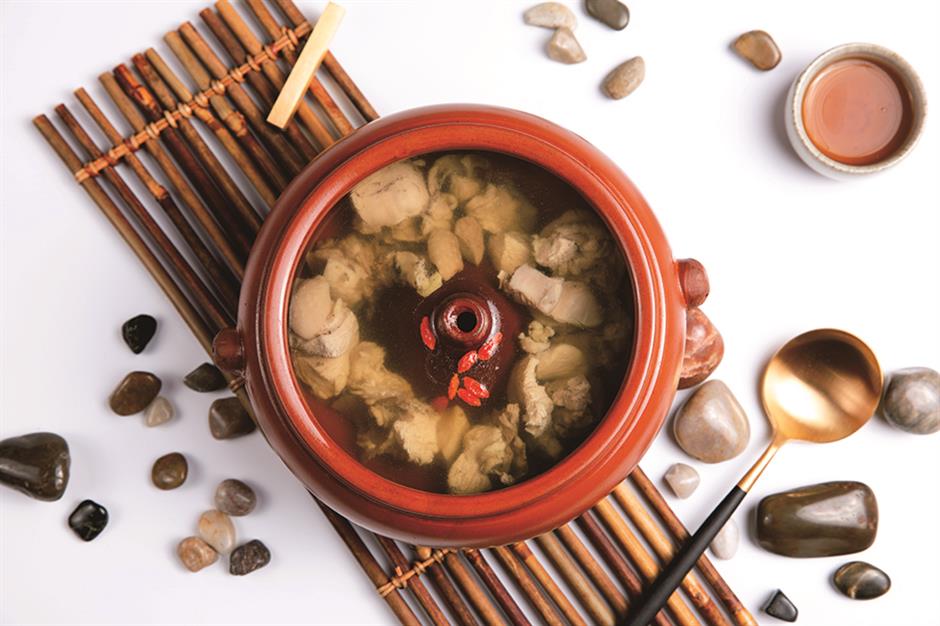 Spicy and sour flavored dishes are also well loved in Yunnan, like the very appetizing grilled fish seasoned with lemon and chilis.

Mixian, or rice noodle, is an important staple in Yunnan. Among the different types of rice noodles, the fermented suanjiang mixian is the most popular locally.

Nationwide, Yunnan’s guoqiao mixian, or “crossing the bridge” rice noodle, is the most well-known. The rice noodles, toppings and hot broth are served separately. The soup is stewed from pork bones, chicken and Yunnan ham.

Eating insects is also a distinct feature of Yunnan cuisine. Many ethnic groups have a tradition of eating insects and some even host festivals in celebration. Insects are high in protein and can be delicious once your fear is conquered.

Insect-based dishes are served in authentic Yunnan restaurants, and the taste and texture of the various insects differ. In Shanghai, you can find the more common varieties, such as deep-fried crickets in some Yunnan restaurants. 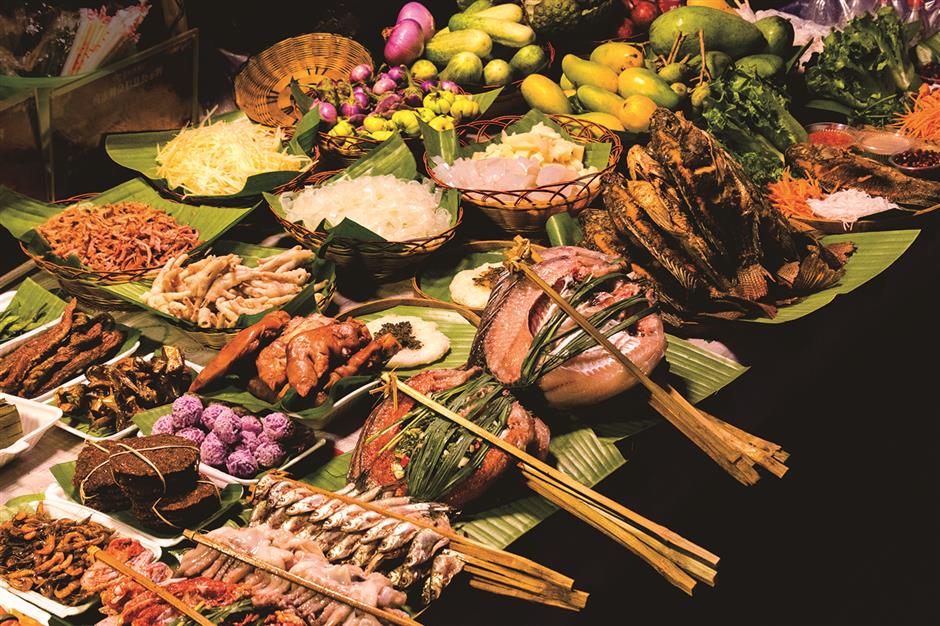 Yunnan cuisine is known for the diversity of ingredients and flavors, from dry-cured ham to everyday staple dish mixian, it has something for everybody.

When talking about Yunnan cuisine, one cannot overlook the amazing local hams crafted with high-quality pig hind legs. The dry-cured ham resembles the shape of pipa, a traditional Chinese musical instrument and the best ones are made in Xuanwei, Nuodeng and Heqing.

When visiting Yunnan villages, one can see hams hanging under the roofs and the delicacy is enjoyed in many ways from appetizer to even the dessert. The hams produced in different parts of Yunnan highlight different pig breeds, techniques and flavors.

In general, the Yunnan ham highlights a sweet, umami flavor against the intense saltiness from the salt used to preserve and age the meat, which is also quite soft and tender. A simple way is to cook the aged hams simply with rock sugar to further enhance the sweetness, and it can be paired with rubing, a local cheese.

The traditional Yunnan ham mooncake is a famous product of the province that’s not just eaten during the Mid-Autumn Festival. The crust of the mooncake is smooth and not oily, presenting a contrast to the rich, succulent ham filling. Salted duck egg yolks and sugared rose petals are also incorporated in the delicacy. The ham is steamed before being wrapped in the flour crust to add moisture.

Xuanwei ham is widely known to Chinese people. Only local pigs with high muscle and fat quality are used to achieve the authentic flavor. The pig hind legs are salted three times before they are put in a ventilated chamber for around a year.

Its competitor, the Nuodeng ham, is a traditional delicacy made by the Bai people living in the Dali Bai Autonomous Prefecture, where the clean environment and excellent water contribute to the high quality of the ham. Here, the hams can be aged for three years and above, and the ham makers must use local slat and pigs. 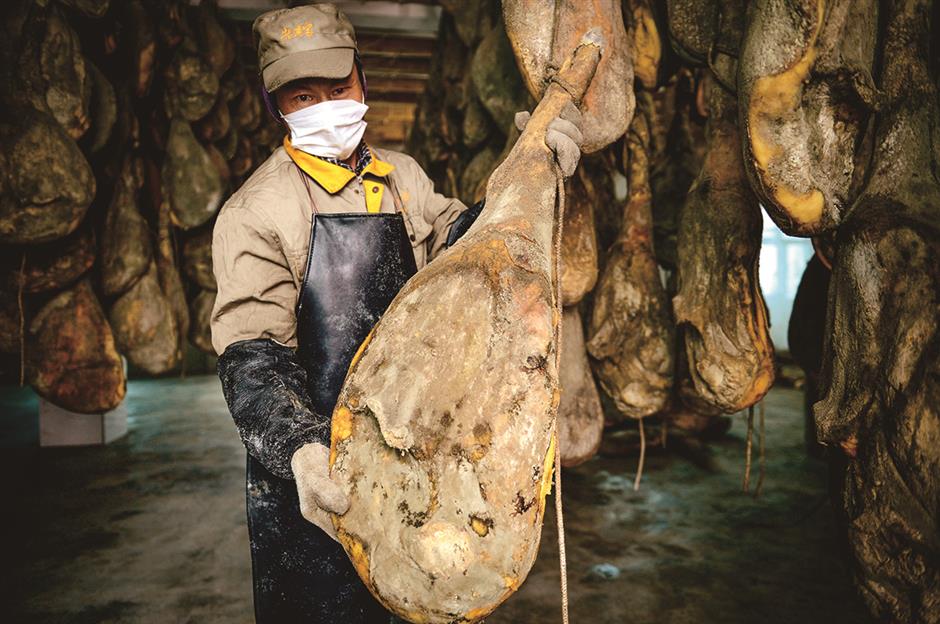 The salt-cured Xuanwei ham is widely used in Yunnan cuisine. 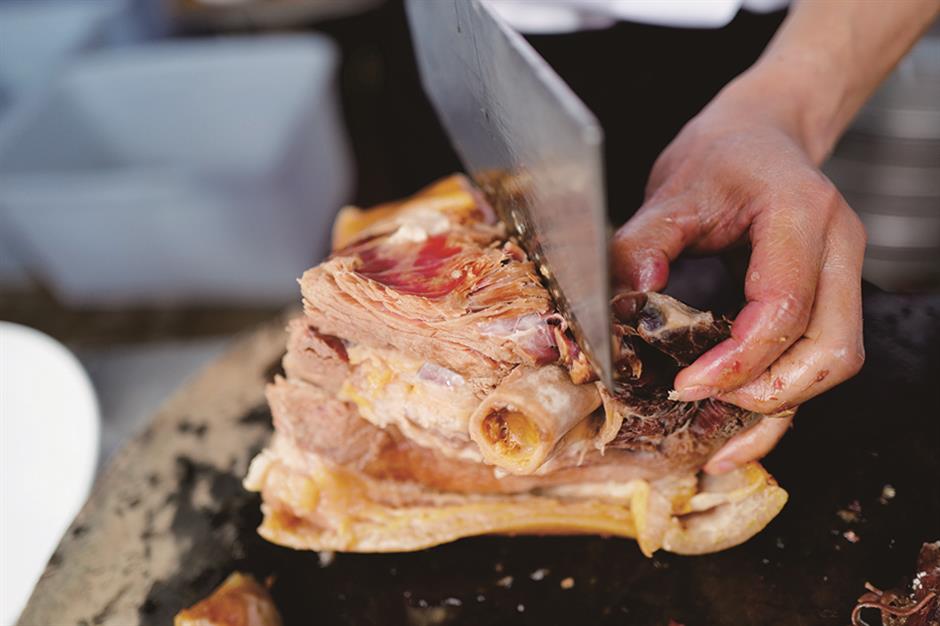 Yunnan is also home to prominent Chinese cheeses, particularly the rushan and rubing made by the Bai people, who live in an ideal environment of meadows and grasslands to raise cows and goats.

Rushan, the milk fan, and rubing, the milk cake, are two different cheeses made with different ingredients. The thin, long sheets of the cream-colored rushan cheese is made with fresh cow’s milk that’s warmed in a wok before acid water is added to achieve the milk curds, which is separated from the whey. The curds are then shaped into cakes by hand before being rolled around sticks and stretched into a fan shape.

Rubing, on the other hand, can be made with goat’s milk, which is more traditional yet stronger in flavor. After adding souring agent to the boiled milk, the white curds separated from the yellow whey are scooped up and poured into a cloth to press tightly and squeeze out the excess whey, when the rubing looks like tofu, it’s ready to eat.

Rubing can be sauteed and eaten with sugared rose petal sauce, or deep-fried as a quick snack. 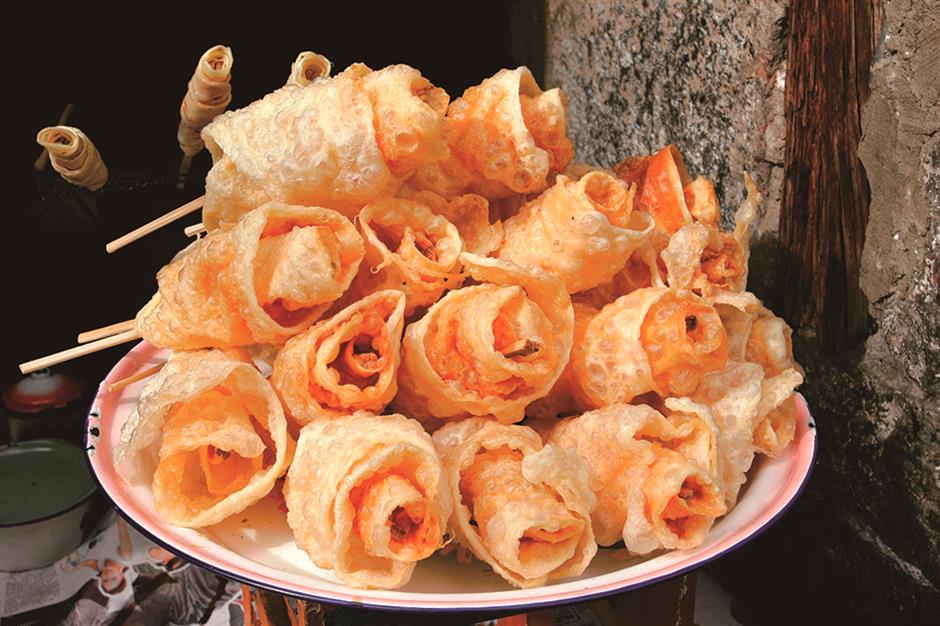 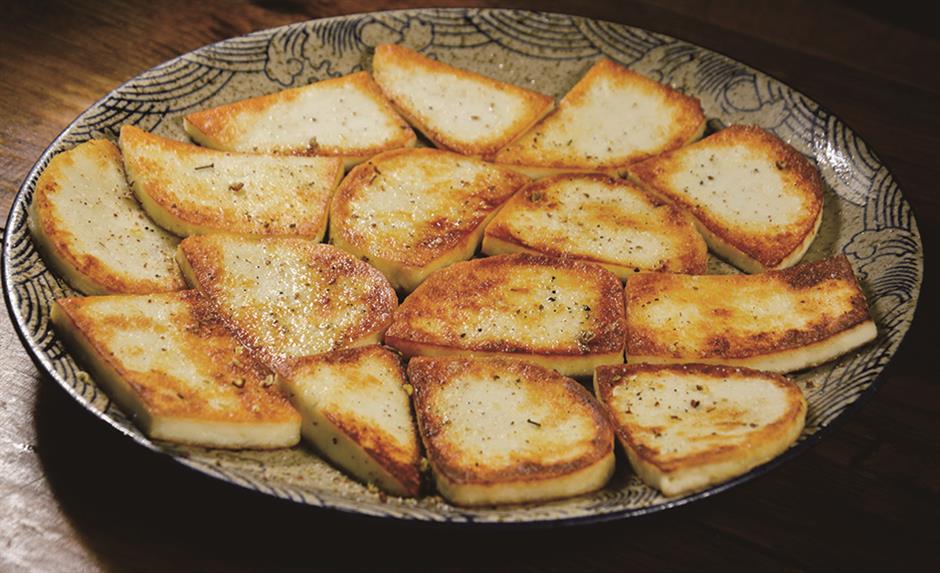