In Chinese home cooking, white pepper is often a bigger star than black pepper as an invisible finishing touch to all kinds of dishes.

Essentially, white pepper and black pepper (baihujiao and heihujiao) are from the same plant, piper nigrum. The distinction is the result of the different techniques used to prepare the spices: Black pepper is made by cooking the dried, unripe fruit while white pepper uses the ripe berries.

White pepper is a mildly pungent dried spice with a straightforward, less complicated flavor profile. It’s not as peppery as freshly grounded black pepper but can add a pleasant touch of spiciness to light dishes that would be easily accepted by people who aren’t fans of spicy food. White pepper tends to have a more lasting taste than the black pepper that may linger in the throat.

White pepper is regarded as having higher medicinal value in traditional Chinese medicine, including the effect of reducing pain, improving breathing and reducing inflammation, especially in treating an upset stomach and diarrhea. It’s also popular with people who constantly feel a coldness in their body and those who wish to improve perspiration even in the hotter seasons. 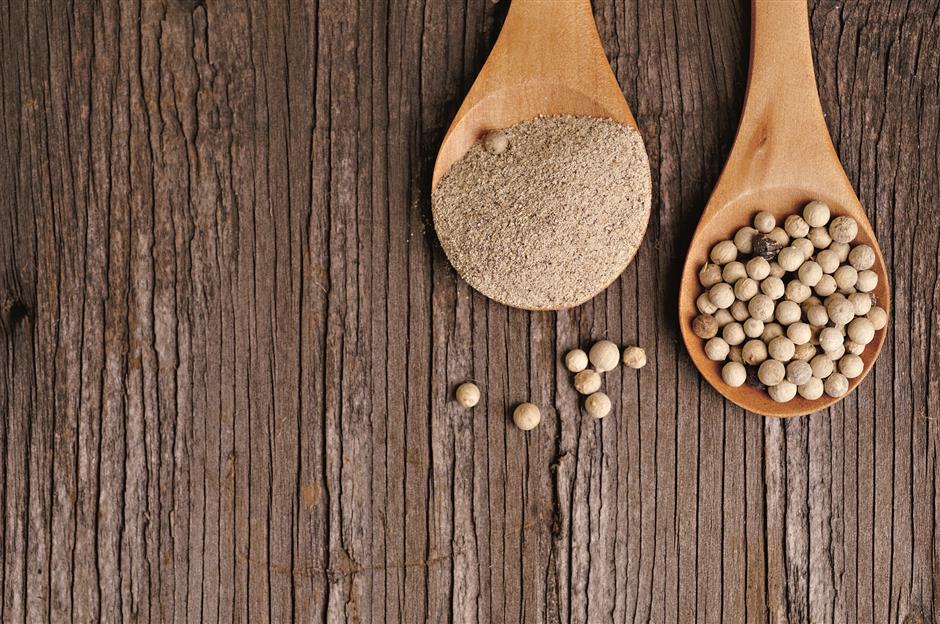 White pepper, which comes from the same plant as black pepper, has a mild peppery taste and spiciness that works well in soups and seafood dishes.

Pepper, which was introduced to China in the Tang Dynasty (AD 618-907), was a precious spice viewed as a symbol of social status and fortune. In the Tang Dynasty, when Chancellor Yuan Zai (courtesy name Gongfu) who served during the reigns of Emperor Suzong and Emperor Daizong had his assets confiscated, 800 stones of pepper were discovered at his home, an astonishing fact that was written into poetry by Yu Qian a few hundred years later in the Ming Dynasty (1368-1644).

Pepper was grown domestically with some success since the mid-Ming Dynasty, and from then the spice gradually became more affordable.

Today, the island province of Hainan is a known pepper production area, with the hot and humid climate suitable for the plant to thrive. Pepper is also widely grown in Yunnan Province and the Guangxi Zhuang Autonomous Region. 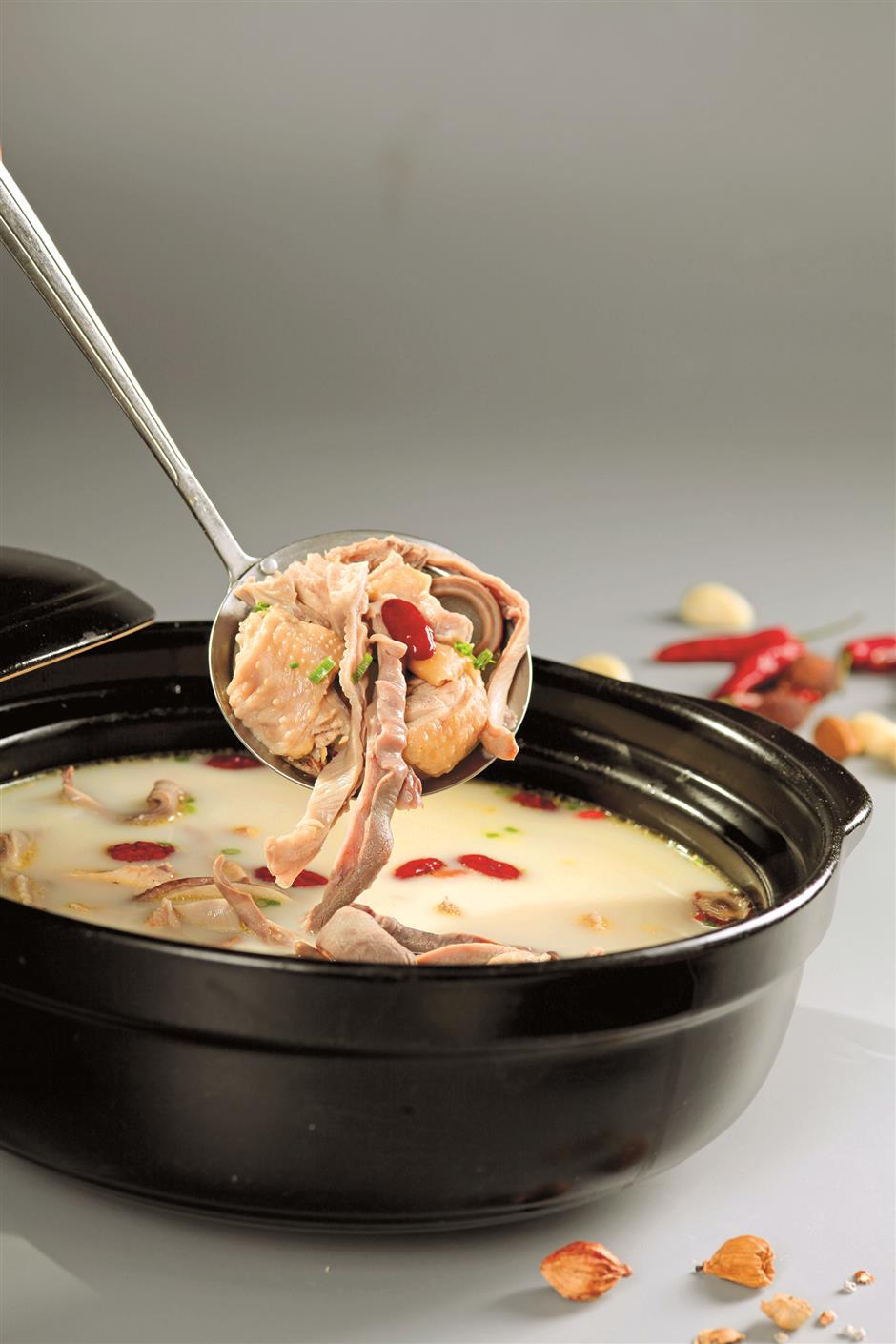 Chinese kitchens usually stock a finely ground version of white pepper to sprinkle on dishes as the final step, or to use in marinade for less-rich meats such as poultry and seafood.

The white pepper powder can instantly add flavor. Before a bowl of hot soup is served, white pepper is added together with fresh herbs like cilantro and scallions. It’s not necessary to add white pepper during the stewing process because the powder quickly loses its potency and flavor in the liquid.

There’s a folk trick when serving soups, that is to add the salt, white pepper, chopped herbs and other seasonings to the bottom of the bowl and then pour in ladles of hot soup so that everything is mixed well.

Hulatang is a traditional spicy, peppery soup popular in Henan and Shaanxi provinces. The recipes and flavors of hulatang vary in different places, but white pepper is the No.1 ingredient in the thick soup and is what gives the dish its distinct spiciness. The simple soup features thin shreds of black fungus, kelp and tofu, meat, vermicelli, wheat gluten and more, and topped with crunchy toasted peanuts, pickle and cilantro.

Whole white peppercorns, on the other hand, require a longer cooking time in order to release their aroma, and they are perfect for making rich, peppery soups.

White pepper, chicken pork tripe soup is an all-time favorite dish from Cantonese cuisine. It’s a divine combination of rich and chewy pork tripe, tender chicken and very peppery, meaty soup. To achieve the rich white pepper flavor, whole white pepper is preferred, which could be roasted in a pan and crushed coarsely to release more fragrance before being added to the soup.

There are two ways to make the soup. One is to stuff the whole chicken inside the whole pork tripe, the other is to cook the two main ingredients separately. The latter is more complicated but has the advantage of making sure the chicken stays tender during the long cooking time, as sealing it inside the pork tripe preserves the juiciness of the meat. The dish is served after taking out the chicken, breaking it into smaller pieces and then cutting up the pork tripe.

The white pepper, chicken pork tripe soup can be used as the base for hotpot. After enjoying a few bowls of the original chicken soup, you can cook meat, seafood, tofu products and vegetables in the broth and enjoy with a dipping sauce of light soy sauce, chili and scallions (or cilantro/chopped celery depending on preference). This sumptuous soup is best paired with light-flavored ingredients, such as slices of fresh fish, handmade tofu, mushrooms and beef tongue.

For a vegetarian soup that highlights white pepper, simply slice a fresh white radish and boil in water until the radish is cooked, then season the soup with a generous amount of white pepper and garnish with some scallions or cilantro. This simple soup has a mild spiciness from the white pepper and sweetness of the radish. The soft cooked radish can be enjoyed with a simple soy-sauce based dressing.

As white pepper can neutralize some of the strong scents in meat and seafood, it’s often used in shrimp stir-fries and fish dishes. 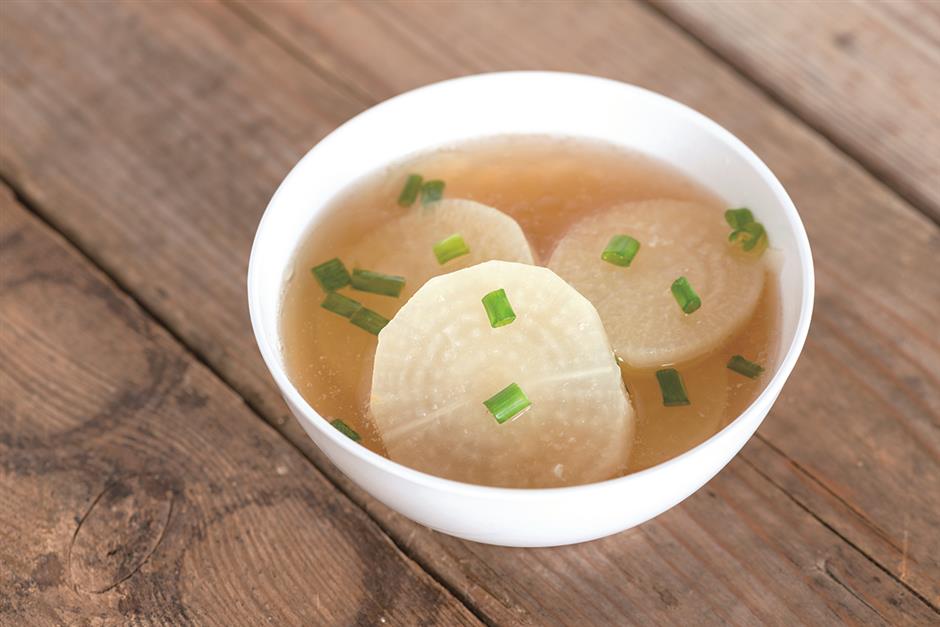 China is home to the unique Sichuan peppercorn, a tongue-numbing and pungent spice that’s hard to chew yet boasts significant fragrance in cooking.

Sichuan peppercorns are usually used in the form of whole seeds. Frying a few of those tiny round spices in oil prior to adding vegetables and meat in stir-fries would make the fragrance linger in the food.

Ground Sichuan peppercorn is used in cooking spicy dishes and stronger-flavored salads. The powder form is easier to eat and it’s often blended with other spices like star anise, cinnamon and dried chilis for a compound flavor, and it’s often used to make chili oil.

There are different varieties of Sichuan peppercorn — the numbing peppercorn (majiao) and green peppercorn (tengjiao), the former is even more pungent and numbing than the regular kind, while the latter packs a more refreshing and less pungent flavor so that occasionally they are added in soups.

﻿
Special Reports
﻿
Pick pepper for added flavor
Harmony and balance, comfort and function
Chinese chicken-friendly Chards
The question is: which chicken?
Don't forget the wine with your lunchbox
An ancient treat that can be good for your health
Meal prep the way to an ideal lunch
Lucky Mart's purr-fect highball and konbini
Pho To Shop for a flavorsome Vietnamese food trip
All the beef, but none of the meat
EXPLORE SHINE