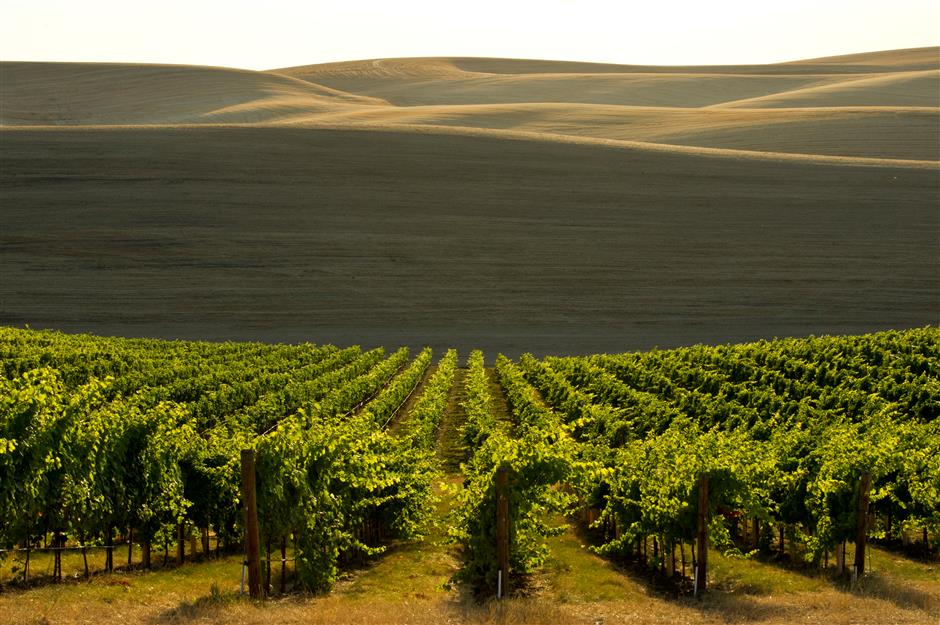 Expansive vineyards and grassy fields of the Columbia Valley

Corn and wine share long and distinguished histories, albeit with distant origins. Sometime around 9 to 10 thousand years ago the progenitor of corn was cultivated and the first wine was made, the former in the Americas and the latter most likely in the Near East.

Archeological studies by the Smithsonian National Museum of Natural History in Washington DC and the Field Museum in Chicago, as well as recent DNA studies, point to a single initial domestication of teosinte in what is now northern Mexico or southwest USA by the ancient Cochise and Mogollon cultures. Over 9,000 years, Native Americans turned teosinte, a small weedy-like semi-tropical grass, into modern day corn. Teosinte has small and widely spaced kernels and is able to survive in the wild; modern corn with tightly packed kernels and husks is unable to procreate without de-husking intervention by humans or sometimes animals. The Native Americans taught European settlers how to raise corn.

The diverse manifestations of corn mean that there’s not one perfect wine partner. Boiled or grilled corn-on-the-cob, corn chips, tacos and breads, chowders and relishes, polenta and popcorn are just some of the varied ways we enjoy corn. Most corn-centric dishes are more white than red wine- friendly — so what variety of white wine pairs best with corn?

Chardonnay with its intrinsic buttery and creamy qualities would be a popular choice. But there is another eminently noble white variety that pairs nicely with corn preparations — Riesling!

Wine drinkers tend to either love or hate Riesling. The variety has never been the crowd pleaser that Chardonnay, Sauvignon Blanc and Pinot Grigio wines have become, but Riesling fans are ardently loyal.

The ancestral home of Riesling is commonly believed to be Germany, or more specifically areas surrounding the Rhine and lower Mosel rivers. In truth, the origin of the variety is still enigmatic. The first documented mention of the variety is in a 1435 purchase document of a nobleman in a small Rhine River town bordering the modern-day wine region of Rheingau. DNA suggests that the parents of Riesling may be non-classified wild vines, Traminer and the rather obscure Gouais Blanc that was an important variety in the Middle Ages in France and Germany. The lesser known red-skin version of Riesling may also be an ancestor grape.

In the 17th century, several campaigns led by Catholic Cardinals and Monastic authorities promoted the planting of Riesling and uprooting of other inferior varieties in the wine regions in and around the Rhine and Mosel wine regions. By the end of the 19th century, the top Riesling wines of Germany commanded higher prices than Bordeaux first growths. At the time, the sweet Rieslings of Germany were the most expensive and prized wines of Europe.

Today excellent Riesling is made throughout Europe and the New World. I would love to introduce Riesling from the lands of the corn’s origin, but even though Mexico and the US southwest produce wines, these wines are not available in China. I’m also unaware of any Rieslings being produced in these warm growing regions. Therefore, in our quest for corn-friendly Riesling wines, we’ll journey northward to one of the New World’s finest wine regions.

Guess where the world’s best-selling Riesling wine is made? Germany you think? Wrong. How about France or Australia. No and no. The distinction goes to Chateau Ste Michelle Columbia Valley Riesling, an off-sweet Riesling with good acidity. Readers are well-aware of my fondness for Washington State wines. I’ve written on the state’s delicious merits of Chardonnay and Merlot wines, but never about the Rieslings. As a cool weather variety, the climate of Washington State is ideal for cultivating Riesling vines. In addition to a cool climate, Washington State wine growing areas have long growing seasons with ample sunshine, pronounced diurnal temperature ranges, low rainfall and mostly free-draining soils. All of this adds up to some of the best Riesling wines anywhere.

The diverse areas of Riesling production in Washington State mean there’s also a diversity of wine styles but most wines accurately exhibit the varietal-typical citrus, apple, pear and mineral aromas and flavors and have excellent intensity, complexity and length. Sweet versions may also offer lovely expressions of honey and white flowers. One rather peculiar aroma and flavor often found in Rieslings worldwide is petrol. Sometimes expressed as kerosene or rubber sensations, these petrol qualities are keenly sought after by serious Riesling fans.