The sea's bounty is ready to eat

Zhoushan, a city in northeast Zhejiang Province, is the largest fishing ground in China known for yellow croaker, beltfish and gazami crabs.

After a local fishing ban was lifted on August 1, thousands of fishing boats sailed off to catch a bumper harvest from the sea.

Regional marine and fisheries bureaus across China execute commercial fishing bans from late spring to early autumn to allow marine life to recuperate. The bans are enforced differently to suit local conditions and the times are adjusted every year. The rules are very strict to ensure that the fish, crustaceans and shellfish can grow and breed sustainably.

The prices of fresh seafood such as pomfret and beltfish have dropped 20 to 30 percent since the fishing season began. The live gazami crabs sold in Shanghai markets are about 30 to 50 yuan per 500 grams, depending on the day, which includes two large crabs or three small ones that can make a main entrée for two. 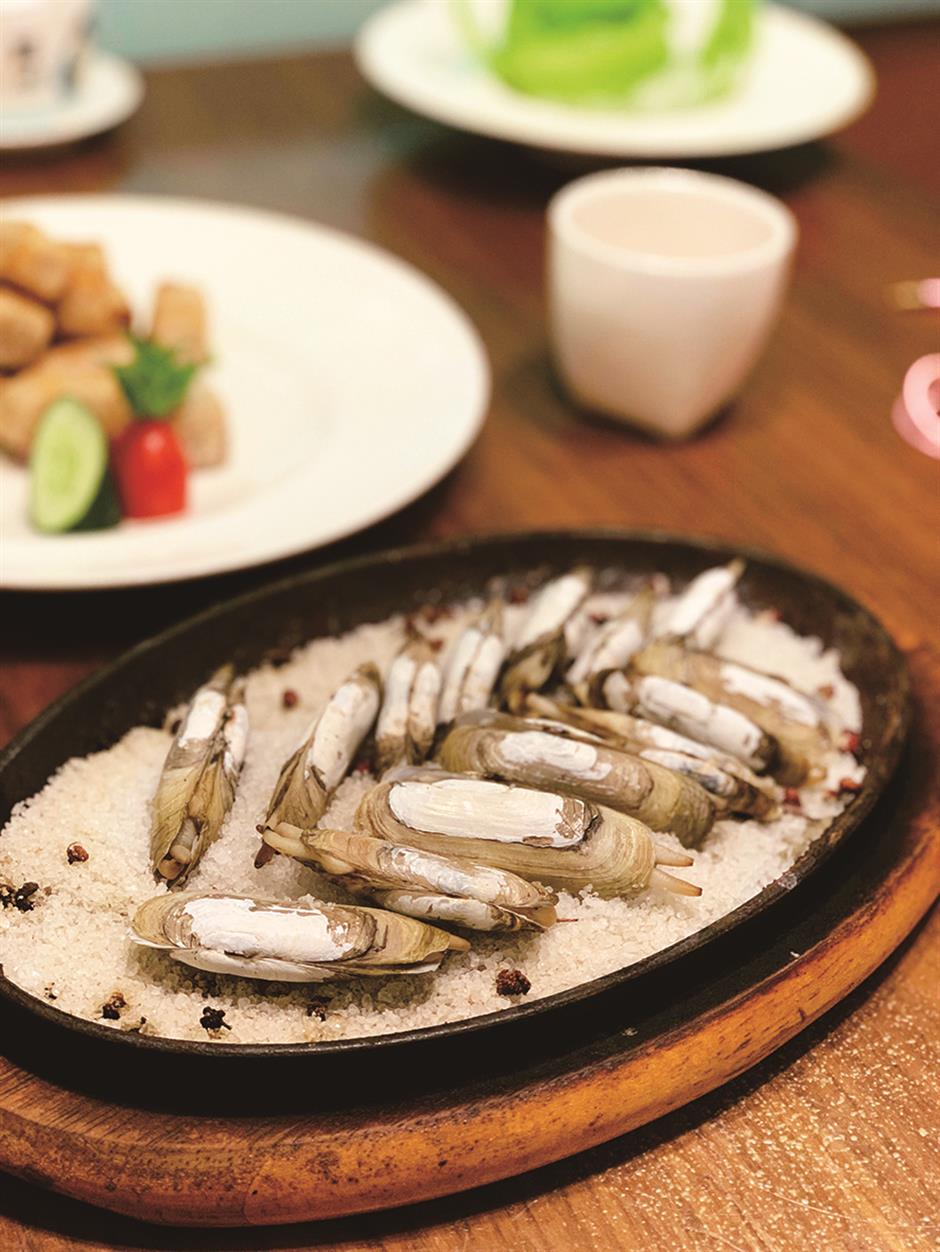 Gazami crabs are an affordable, tender and naturally sweet crab species that’s also the most widely and heavily fished in China’s coastal regions.

Fresh, live gazami crabs have a hard grayish green shell, white abdomen and dotted claws. The body of a crab is extra meaty and the claws are tenaciously strong and could remain vital after an hour in the freezer.

Steaming gazami crabs is a one-step recipe to enjoy the most original flavor of the seafood. Add a few slices of ginger to tone down the fishy taste. If you have a cast iron pot or braiser (a round, shallow Dutch oven), steaming crabs is even simpler and it saves the trouble of washing off the seafood smell from the steamer and cleaning the small holes of the steaming basket.

Place the Dutch oven on the stove and add just enough water to cover the bottom surface of the pot, bring it to a light boil on a medium heat and then place slices of ginger and scallion in the pot before placing the cleaned crabs on top and closing the lid. Turn off the heat in 10 to 15 minutes depending on portion size and let it “steam” in the pot for another 10 with the residual heat preserved by the pot. 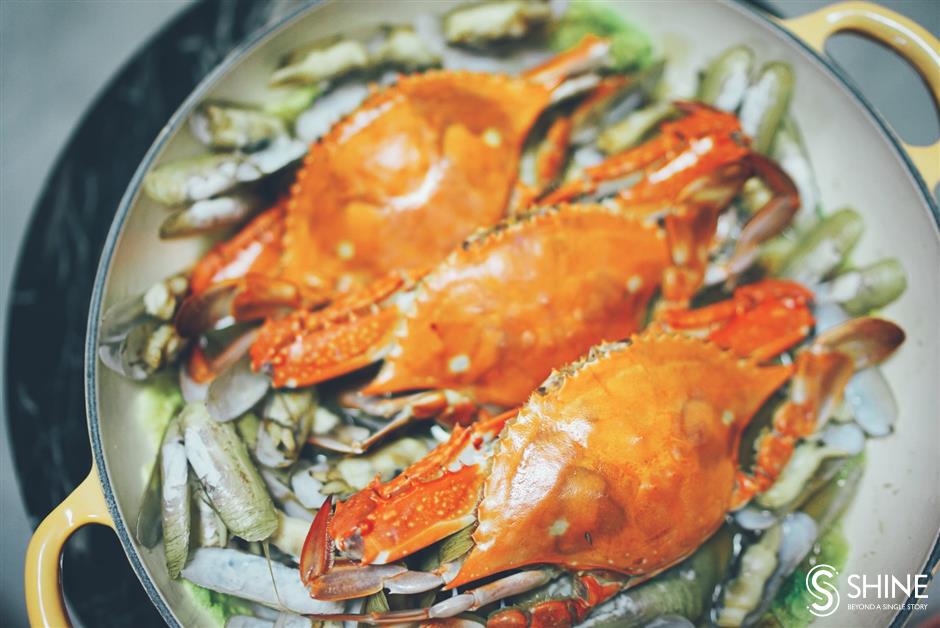 Gazami crabs steamed with razor clams on a bed of baby Chinese cabbage.

This method is quick, saves the trouble of boiling the water and preserves the flavor of the crabs. You can even layer some fresh leafy vegetables underneath the crabs and add some shrimp and clams in the pot after the crabs turn red to make it more nutritionally complete. Season the dish with a simple dressing of minced garlic, light soy sauce, sugar, salt and vinegar before serving. The delicious soup on the bottom created by steaming the seafood can be used to mix with some soba noodles or soaked vermicelli/cellophane noodles as a fulfilling staple.

Most gazami crab recipes, other than steaming, require butchering the crabs before cooking, which is to remove the internal organs (like the gills and heart) and cut the crabs into large chunks so that the flavor of the spices and sauces can be infused in the sweet crab meat.

Cooking the chopped crabs may lose the delicious roe, and a trick to preserve the roe is to lightly coat the cross section with cornstarch to seal the surface, then fry the crabs in some oil until the color turns red. The next step is simpler: Sauté shreds of ginger, scallion, garlic and dried chili in some oil until the fragrance comes out, add the cooked crabs and season with light soy sauce or the seasoned soy sauce for seafood. The fresh crabs from the sea boast a natural saltiness in the meat, so be cautious about the amount of salt that goes into the dish. Pre-cooked rice cakes can be added in crab stir-fries to make a classic local dish. 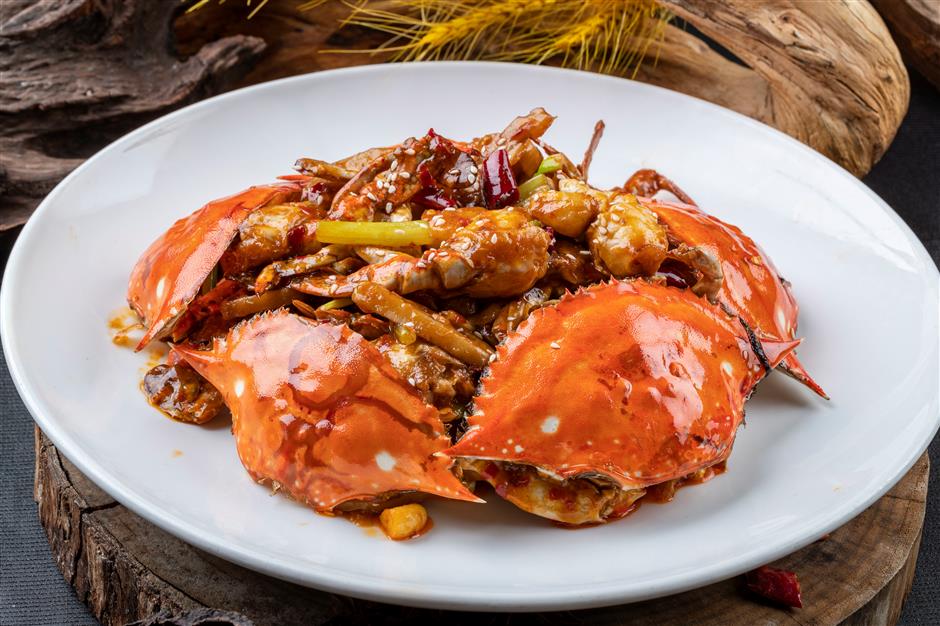 Chaoshan-style gazami crab congee, on the other hand, is an umami and warming dish that boils fresh seafood — gazami crab, shrimps and scallops in plain rice congee with ginger, an ideal all-in-one staple perfect for dinner.

Qingxie, which translates as green crab, is another signature crab species produced in Zhejiang’s Sanmen County. The crab species has a thinner shell and larger claws filled with more meat compared with gazami crabs, and they are cooked the same way, steamed or braised.

In Zhejiang Province, a traditional way to eat fresh sea crabs is to marinate the raw crabs in brine for 16 hours and then dissect and serve directly. Some recipes also use white liquor or rice wine to counteract the fishiness and add flavor. 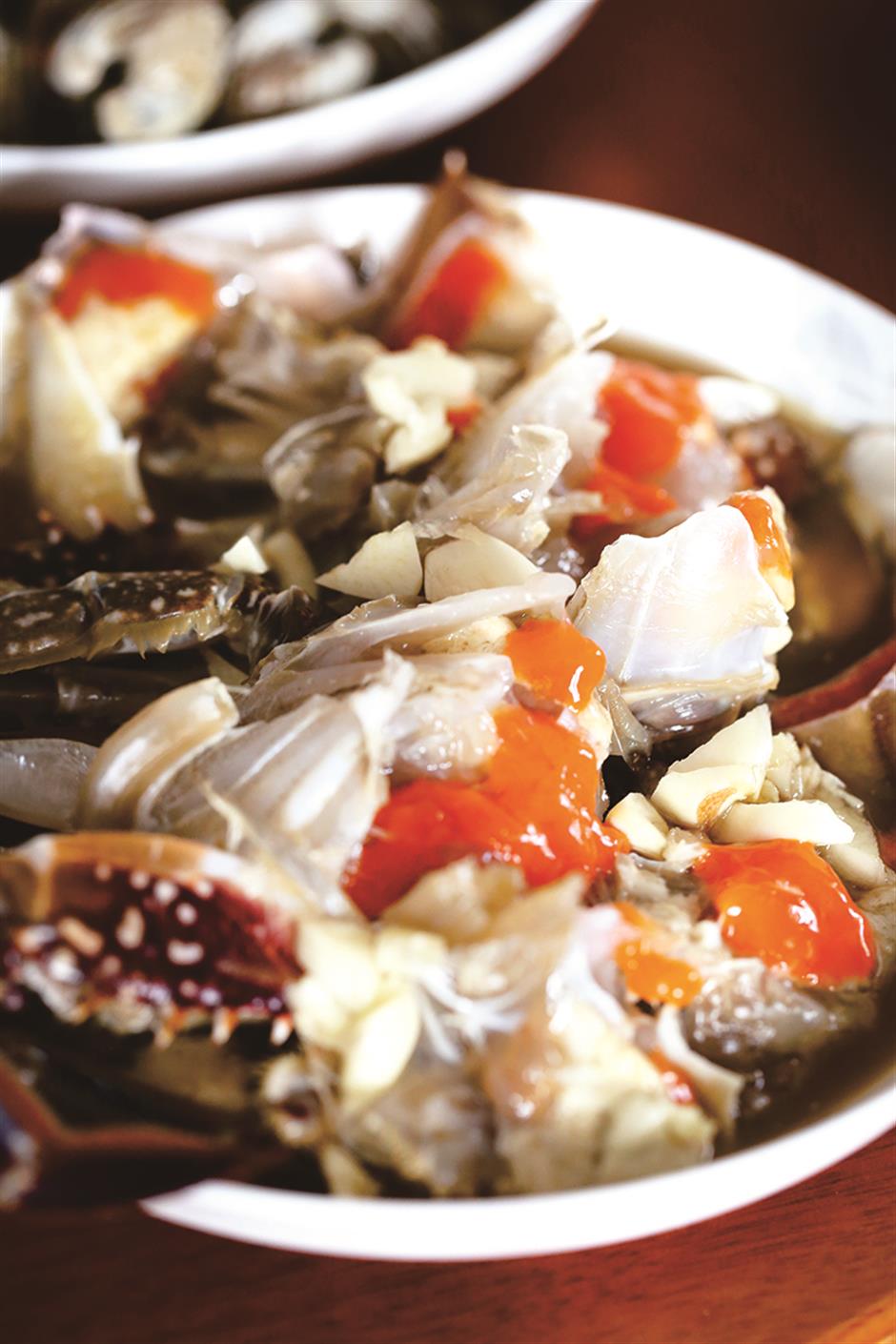 Yellow croaker is the top choice marine fish of the season, highlighting flaky and tender meat without small fishbones and perfect for steaming, braising or deep-frying (usually the small yellow croaker). The fish’s head and bones can be seared in a pan and then made into a soup base for noodles. The meat of the fish is boiled later in the soup to create one of the most umami staples of the region.

Beltfish, also the large-head hairtail, is another widely consumed fish in China that can be floured and dried to make a satisfying appetizer. The trick is to marinate the smaller pieces of fish in cooking wine, ginger, scallions, garlic and spices to improve flavor, and avoid turning the fish too frequently during frying so that the skin remains intact.

While yellow croaker and beltfish are the more known species to be enjoyed during the fishing season, the pomfret is another delicious fish that deserves more attention. The fish has a flat, wide body and small head, boasting rich flavors. The best ways to cook pomfret include steaming with scallions, pan-fry after marinading the fish with cooking wine, ginger and scallion, or braise in a rich sauce. 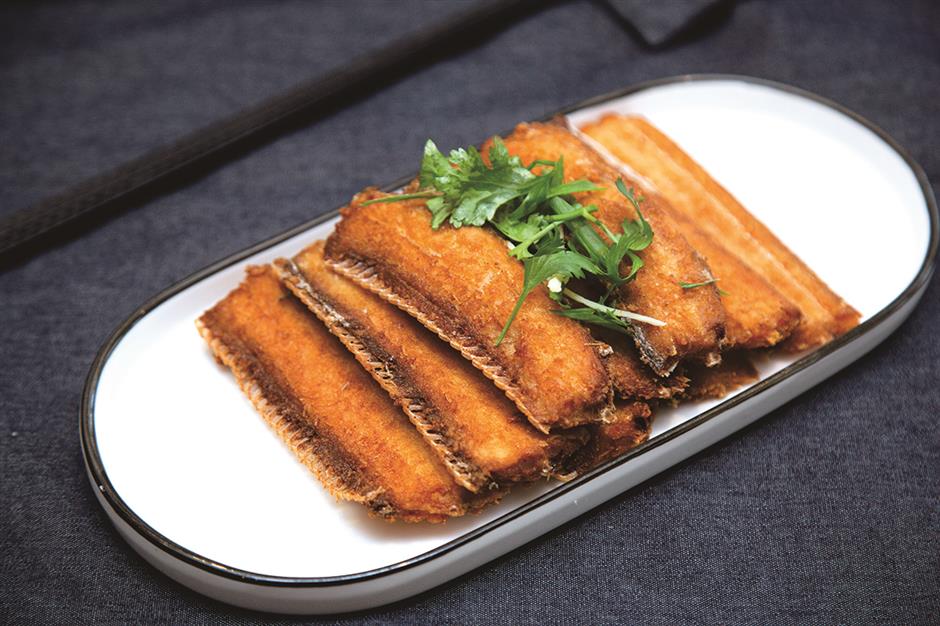 Beltfish is often marinated with cooking wine and ginger before being deep-fried.

Though modern logistics now guarantee the bumper seafood harvests arrive live and fresh, planning a weekend getaway to the Zhoushan Islands in the fall fishing season is a top choice where you can not only enjoy the freshest seafood, but also explore the local scenery and culture.

In terms of transport, the main island of Zhoushan can be reached by direct buses from Shanghai, and the different islands are connected by boats.

Mount Putuo, the most popular tourist destination in the Zhoushan Islands, has been a holy site for Buddhist pilgrims since the Tang Dynasty (618-907)

There are also many interesting villages to explore on the islands.

Dinghai ancient town is a historic destination that’s commercialized with leisure shops. The former residence of Sanmao, the female writer from Taiwan, is also in Zhoushan.

Although raw seafood dishes such as qiangxie are local specialties, they are not suitable for people with weaker digestion, and it’s always recommended to eat seafood that is fully cooked for safety concerns.