Just as mille-feuille gives innumerable layers of deliciousness in French pastry making, yousu, another combination of flour and oil or fat, is the foundation of traditional Chinese pastry.

Yousu is what makes the flaky layers in Suzhou-style mooncakes, or the utterly rich center in Chinese-style baked flatbreads.

There are three types of yousu dough: water dough, dry dough and crumbly dough. The basic ingredients are the same — flour and oil — but their different ratio as well as making process can deliver very varied results.

Water dough uses flour, a small amount of oil and warm water at a ratio of 150 grams of oil and 200 grams of warm water for 500 grams of flour. After the initial mixing, a small amount of cold water can be added to pound the mixture into a soft, lump-free, bendable and smooth dough. This type of dough is usually used to make the outer layer of the flaky mooncake or egg yolk pastry. It should be rested for at least 30 minutes before use.

The dry dough or lard dough, on the other hand, mixes flour with animal fat (lard or beef tallow) directly. The technique to put the loose dough together is to push with the heel of the palm until it’s fine and smooth. The dry dough is the second layer in mooncake or pastry providing the crumbly texture and richness in flavor. 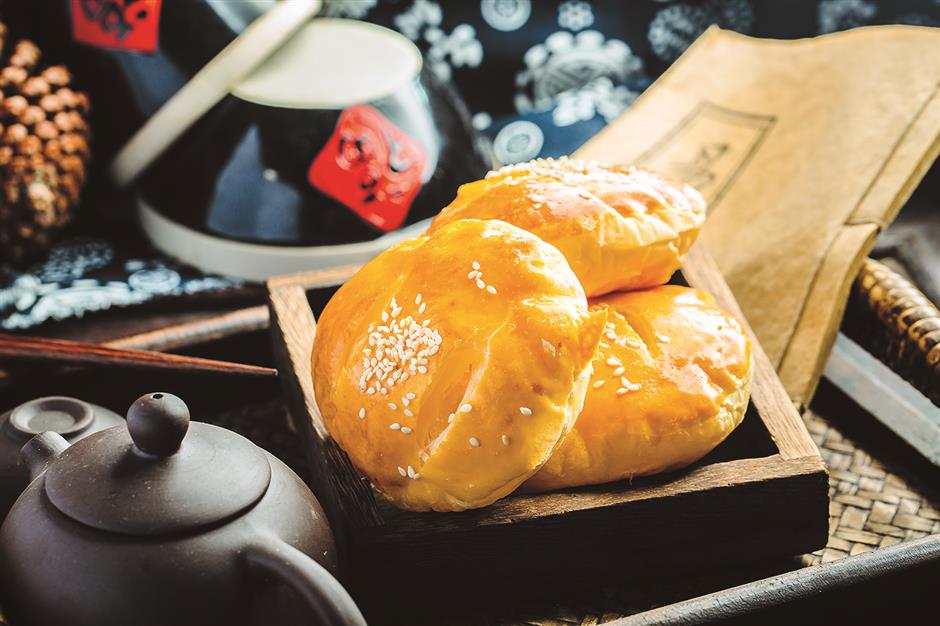 Traditional Chinese pastry uses yousu to achieve the not only layered, but flaky and crumbly texture.

The crumbly dough uses flour, oil and sugar with a small amount of water, the amount of oil should be a third to half of the amount of flour to guarantee a crumbly-yet-not-loose texture. This type of dough is usually used to bake tea desserts like taosu (walnut cake) and raisin cookies.

Wrapping the yousu pastry is also a science, with various recipes calling for different techniques to achieve the best result without too much intense labor.

“Big wrap” places a piece of dry dough in a piece of rolled-out water dough, which is then wrapped and sealed, while “spreading” means rolling water dough into a thin, rectangular sheet and then diluting the dry dough with some oil spread evenly on it, which is then rolled into a barrel shape and separated into smaller pieces of dough. This technique uses a smaller amount of yousu to create very layered pastry.

When preparing liquid yousu for flatbread recipes, the trick is to lightly stir-fry the flour in a wok over a low heat until the rich aroma comes out, then mix in an appropriate amount of the Thirteen Spice and salt for seasoning before pouring oil that’s been heated up by about 80 percent. The runny, paste-like yousu is ready to be spread over sheets of leavened dough, which is then folded and pan-fried to make the delicious youbing, or oil flatbread, a perfect item for breakfast with congee and pickles. 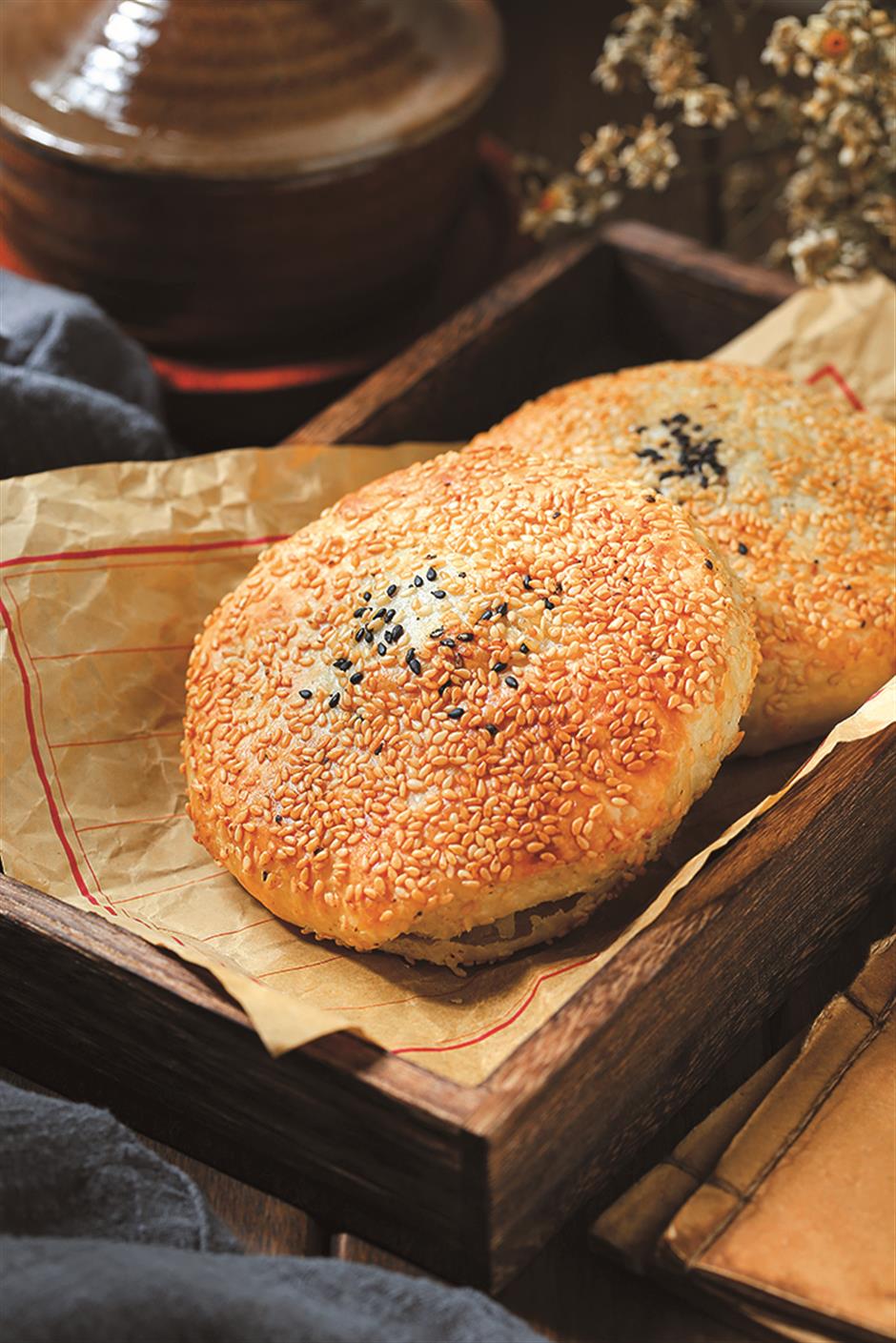 The yousu flatbread is a traditional snack in northern China, presenting a golden color and crispy yet flavorful layers. It’s made with the same yousu as used in youbing and won’t sink down and harden up when it’s cooled. Using tangmian, which is dough mixed with boiling water for a softer texture, yousu flatbread is usually coated with a layer of egg wash and sesame seeds before baking in a clay oven to boost flavor.

The flatbread can be either savory or sweet, especially the scallion oil recipe that presents another layer of flavor. Some people stuff delicious vegetable or meat dishes inside the flatbread to make sandwiches as a whole meal for breakfast.

Rendered pig fat sounds heavy and off-putting, but presents no obvious meaty taste when it’s used in pastry making. Many Chinese families would render pork fat at home, which can be cooled and sealed in a jar for future use. The rendering process also produces pork crackling, a delicious snack when seasoned with sugar or salt to taste, which can also be tossed in vegetable stir-fries to boost the rich flavor. 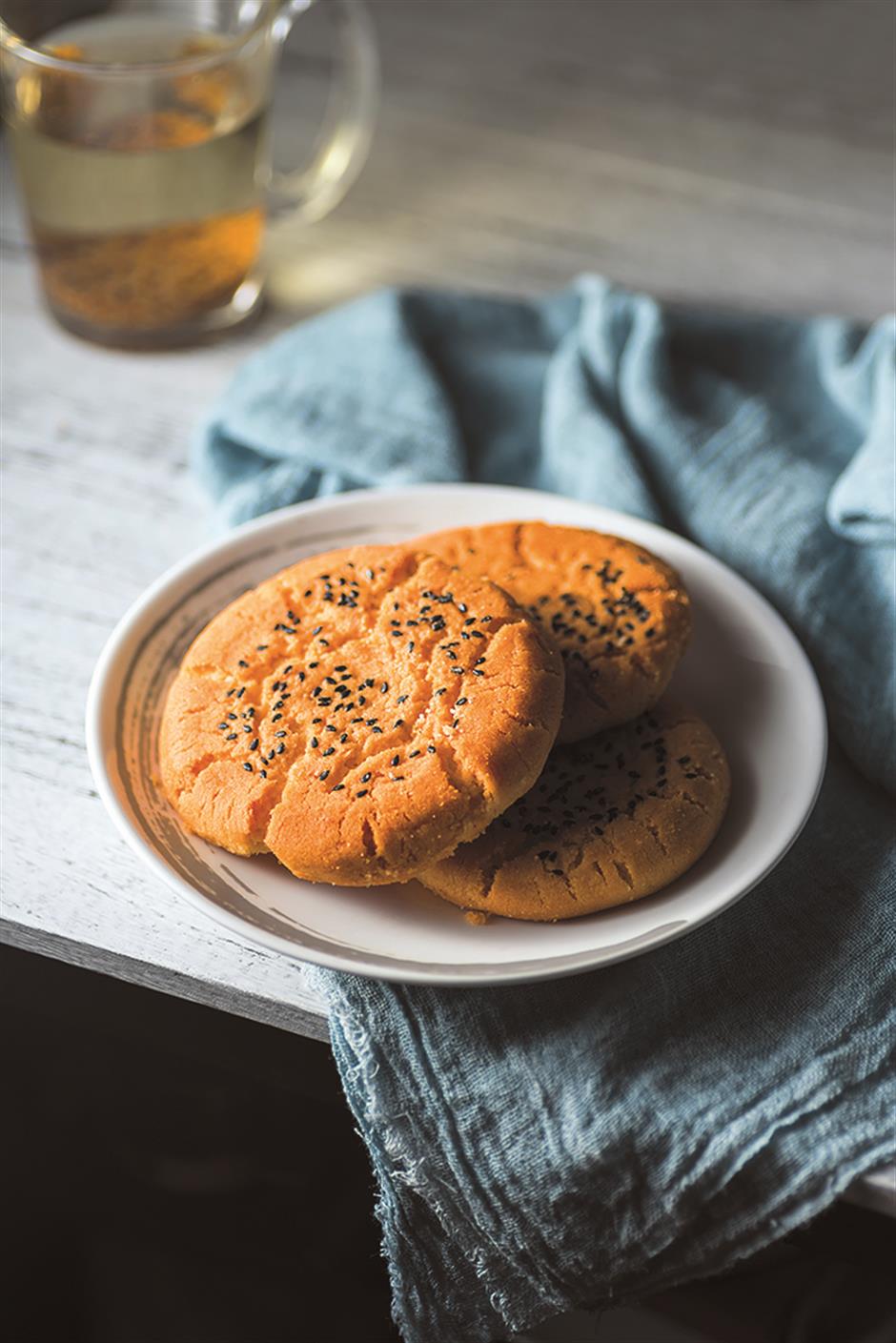 There are several features of traditional Chinese pastry — crispy and crumbly layers of pastry, sweet in taste, with majority involving some kind of dense filling like lotus seed paste, red bean paste or jujube paste.

The more exquisite Chinese pastries often take on unique shapes and colors with delicate details, like the lotus pastry resembling the lotus flower, it may not be as tasty as the good old jujube flower pastry, but is a true showcase of the pastry chef’s skills.

A perfect lotus pastry looks exactly like a blooming lotus flower: gradient pink petals and bright yellow stamen. The color comes from food coloring, either artificial or natural like beetroot powder. The body of the lotus flower involves a layer of water dough on the outside and a ball of dry dough on the inside. Then it’s rolled and folded to create the pastry to wrap the filling. Before deep-frying the pastry in oil, make three cuts on the top of the wrapped dough with scissors. When the pastry hits the oil, it will immediately bloom up to numerous layers of thin pastry.

Walnut pastry (not taosu) is another signature Chinese snack that looks exactly like a walnut with the tiny holes and thin lines decorated on the brownish dough. The walnut pastry’s color comes from brown sugar, though some people prefer to use cocoa powder for the chocolate taste and convenience.

The wife cake usually has a sweet filling of winter melon paste, coconut, butter and sugar, while the husband cake is on the savory side with meat (or meat floss), garlic, peanuts and more. The two cakes also use a combination of puff layers, but the cakes are usually flat in shape. 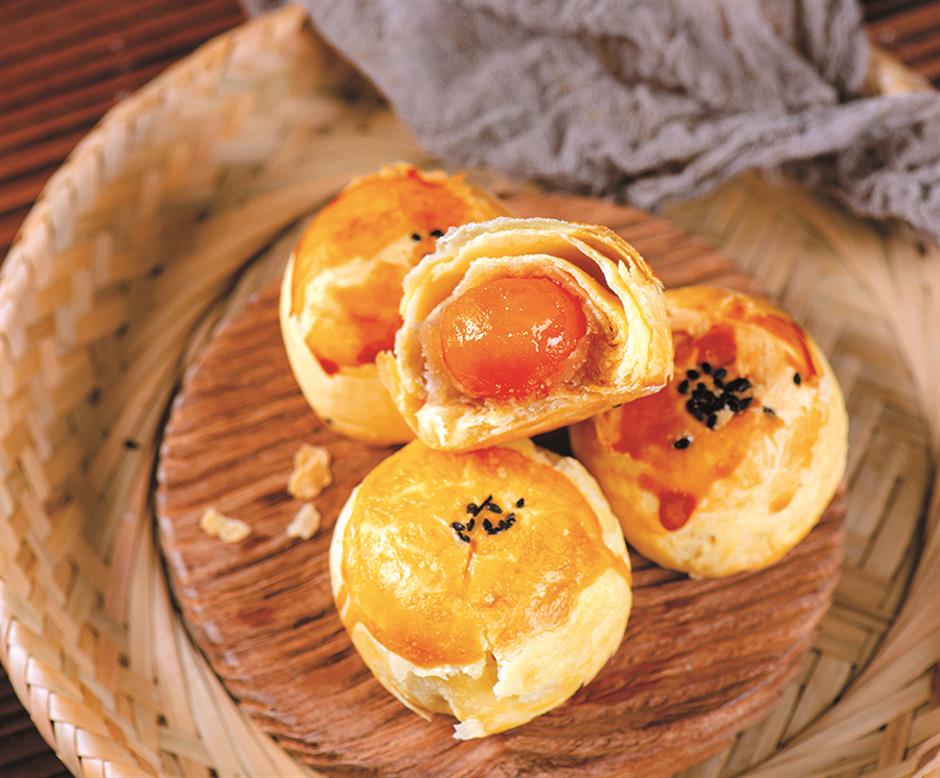