As Shanghai officially bids farewell to the longest stretch of hot days in history, it's finally beginning to feel like fall. One of the seasonal fruits that's very fitting for the occasion is sweet, crisp and juicy pears.

But pears boast great health benefits, such as supporting gut health with their soluble and insoluble fiber content, and boosting the immune system with their high content of Vitamin C and copper. In China, pears are particularly recognized for their soothing properties that relieve coughs and reduce phlegm.

There are more than a dozen varieties of pears that vary in terms of shape, size, flavor and texture. The classic pear shape is wider at the bottom than it is at the top, and some varieties are more spherical like apples.

Dangshan pears grown in the county of the same name in Anhui Province is one of the most common and less expensive varieties. It's a crossbreed between a white pear and sand pear. These spherical pears are usually quite large, with a thin and crisp yellowish skin and lots of brown spots. The flesh is very crisp and juicy, and the core is quite small. They're great to consume directly or blend into a juice.

The crown pear from Hebei Province and other northern regions is another common variety, with light yellow skin, large size and sweet, crispy flesh. 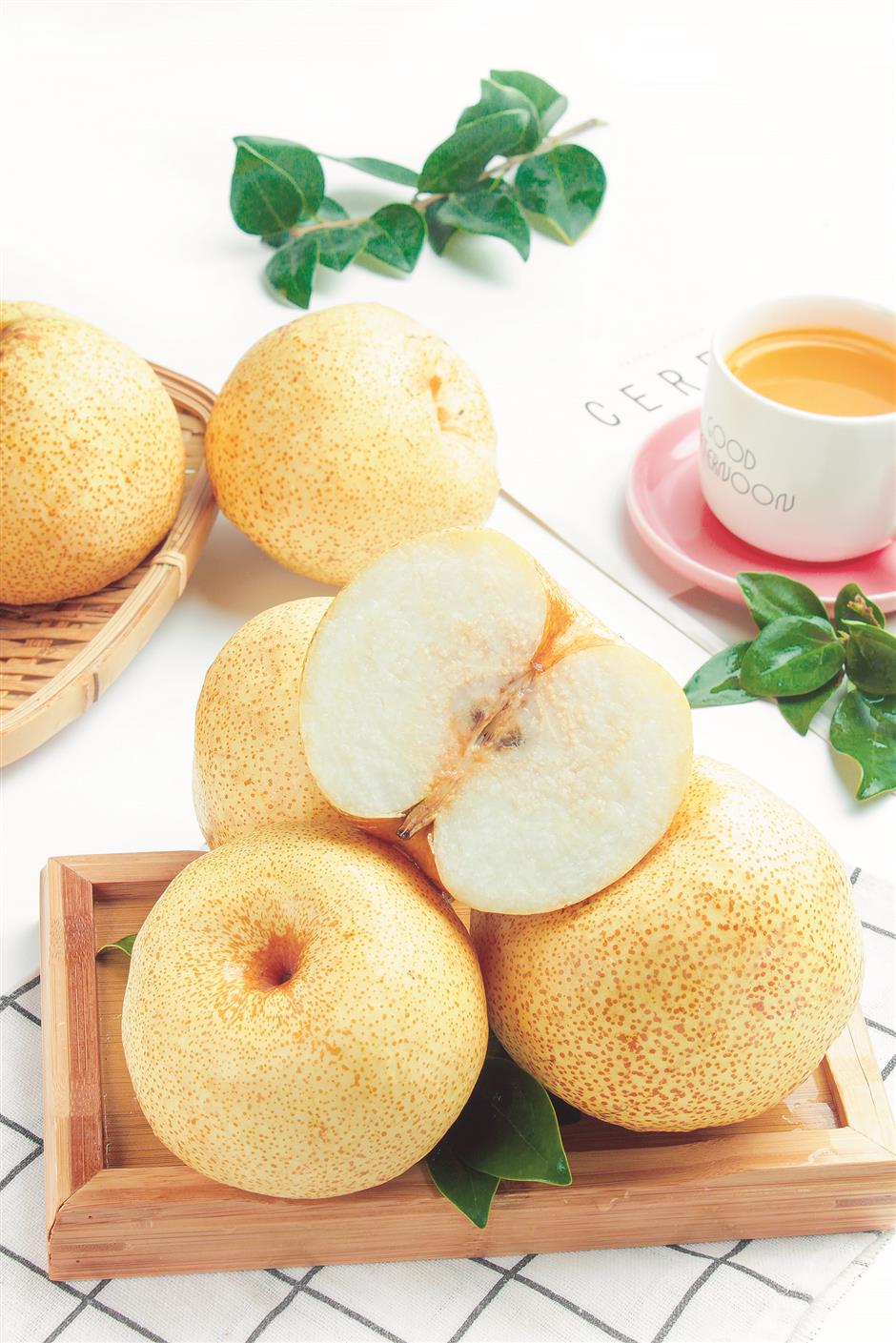 Pear is the perfect fruit for the drying autumn season.

Qiuyue pears, which translates to "autumn moon pear," are a more expensive hybrid variety introduced from Japan (the Akizuki pear). They're also spherical but with yellowish/brown skin. Their size is medium to large, with white flesh that tastes very crispy and smooth. They can be stored for longer periods of time under the right conditions, and can be eaten directly or cooked in sweet recipes.

Fragrant pears from Korla in the Xinjiang Uygur Autonomous Region known as Korla pears are another popular variety. The native species is famous for a strong fragrance that's quite perfumy, juicy flesh and crispy -yet-fine texture.

Pears are also a great sobering refreshment to ease the discomfort from drinking too much alcohol, providing the nutrients and hydration alcohol depletes from the body.

To select the ideal pears for the dining table, the trick is to find ones that feel firm but not too stiff, with damage-free skin and nice fragrance.

Ripe pears are best stored in the refrigerator to prevent them from rotting. For pears that aren't fully ripened, room temperature storage is sufficient. 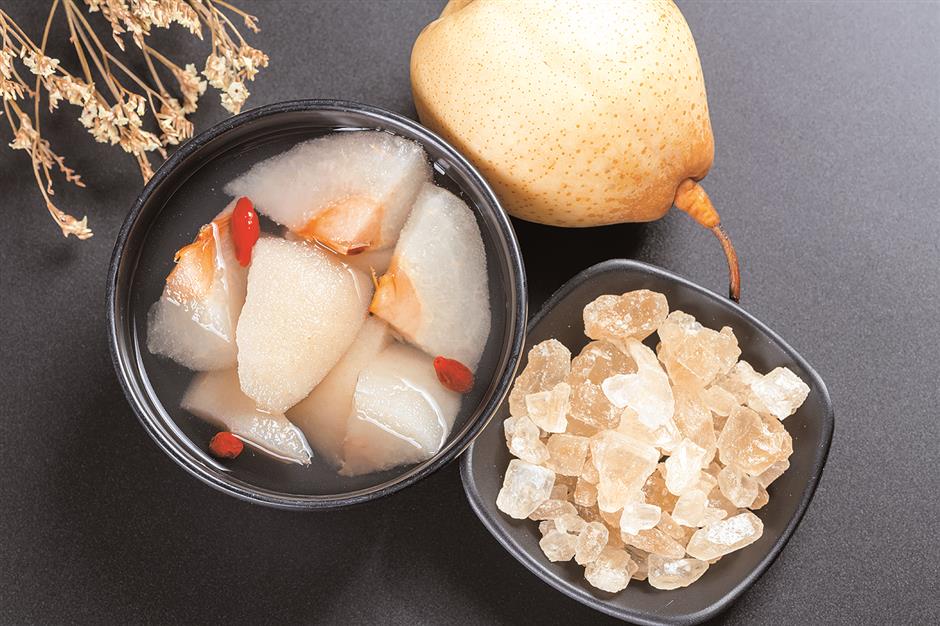 Pears are not just eaten directly as a fruit, they're also incorporated in everyday cooking to enhance recipes and health benefits.

In Western-style cooking, pears are often caramelized to serve as or with desserts. The halved pears without their cores are dipped in sugar on the cut side and then placed in a skillet with the sugared side down. After they begin to brown, water is added to simmer the pears until they're soft, and the thickened liquid is served as a sauce on top.

In China, pears are usually steamed or boiled to make sweet desserts.

Steamed pears are made using the dun technique, which consists of placing fresh, skinless pears without their cores in a bowl and steaming them. A small amount of concentrated soup will form in the bowl. The meatier varieties of pears like Qiuyue are very suitable for steaming, as the less fibrous texture softens up well. Some people prefer keeping the skin on.

Pears are usually steamed with rock sugar and goji berries to boost the taste and nutrition. The rock sugar will melt into the sweet soup after and average steaming period of 30 minutes.

Steamed pears are usually served to ease the dryness of autumn , sooth the throat and warm the body. A few shreds of high-quality aged mandarin peels can be added, as they share similar health benefits. 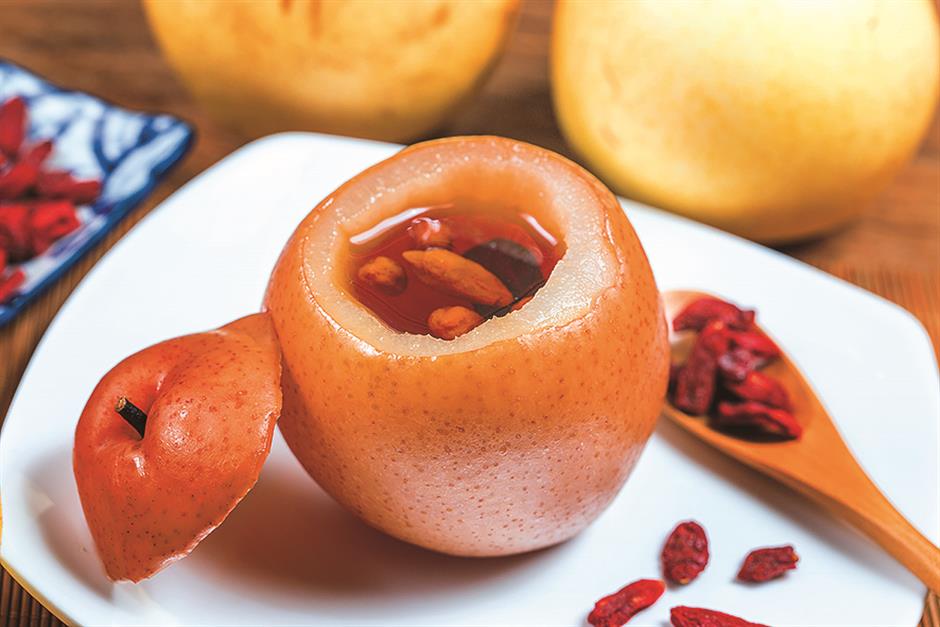 Chunks of pears can also be boiled to make sweet, soupy desserts with white fungus, jujubes, goji berries and lily bulbs. Adding hawthorn fruit or preserved plums can balance the sweet taste with some acidity.

In Cantonese cuisine, pears are sometimes stewed in savory soups with meat or vegetables.

Hot pear juice is a perfect drink for chilly days. Using sweet, ripe pears, boiling the blended pear juice over low heat creates a warm beverage without adding sugar. To elevate the taste, a few shreds of ginger and even a little bit of alcohol like whiskey or brandy can be added for the perfect wintertime cocktail.

Pear congee is a quick staple for breakfast or dinner, made by simply adding small slices or shreds of pear into rice congee when it's almost finished cooking. Pears bring a natural sweet flavor to the congee as well as a texture contrast. 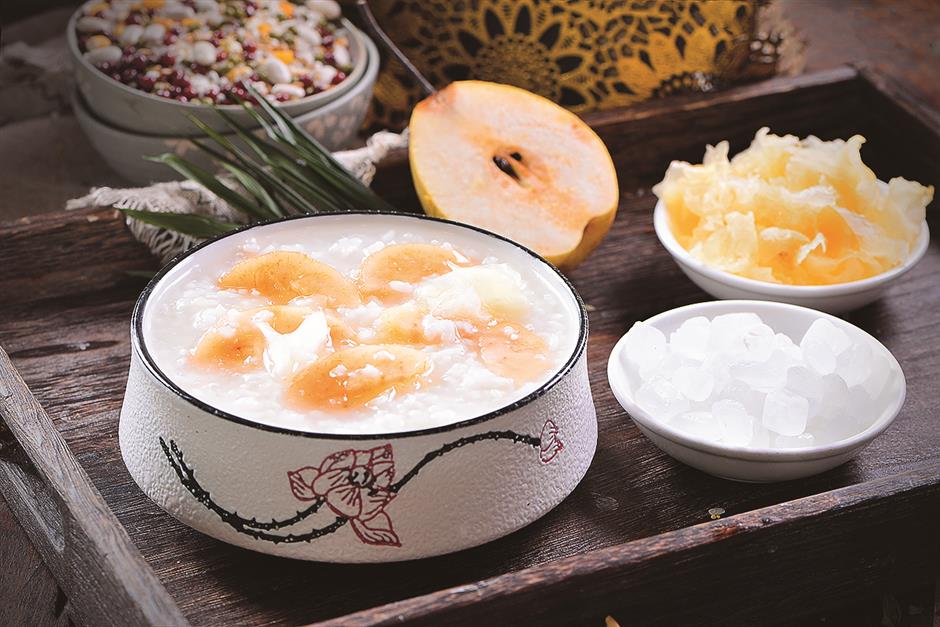 Autumn pear paste is a classic Chinese remedy known for relieving coughs and nourishing lungs. The pear paste is thick and dark brown, and enjoyed by diluting in warm or hot water. One can find pear paste products in supermarkets.

It can also be made at home by cooking a blended mixture of pears, jujubes, ginger, monk fruit (luohanguo), rock sugar and more Chinese herbal ingredients in a pot over low heat until the consistency becomes very thick and the color darkens. 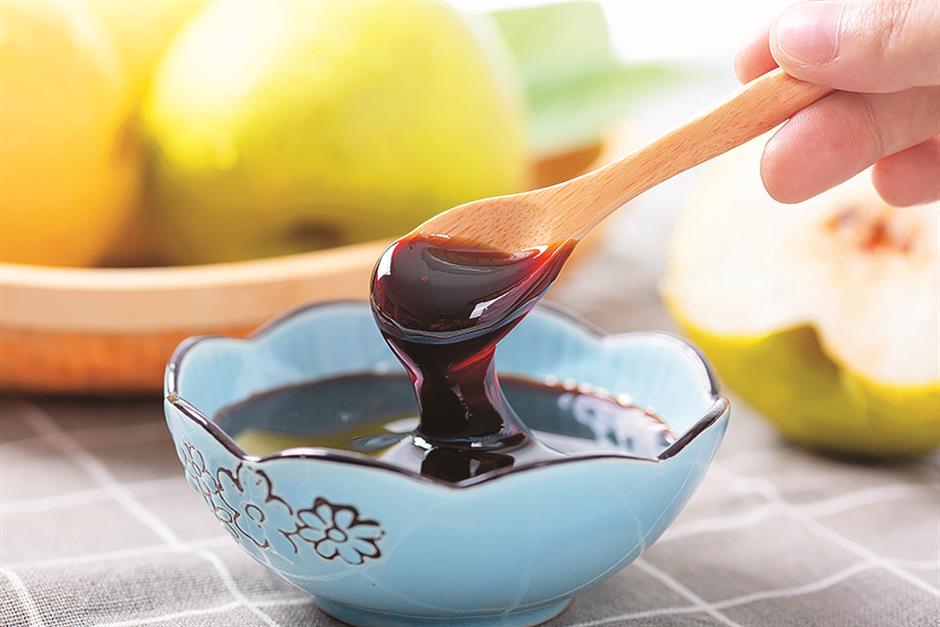