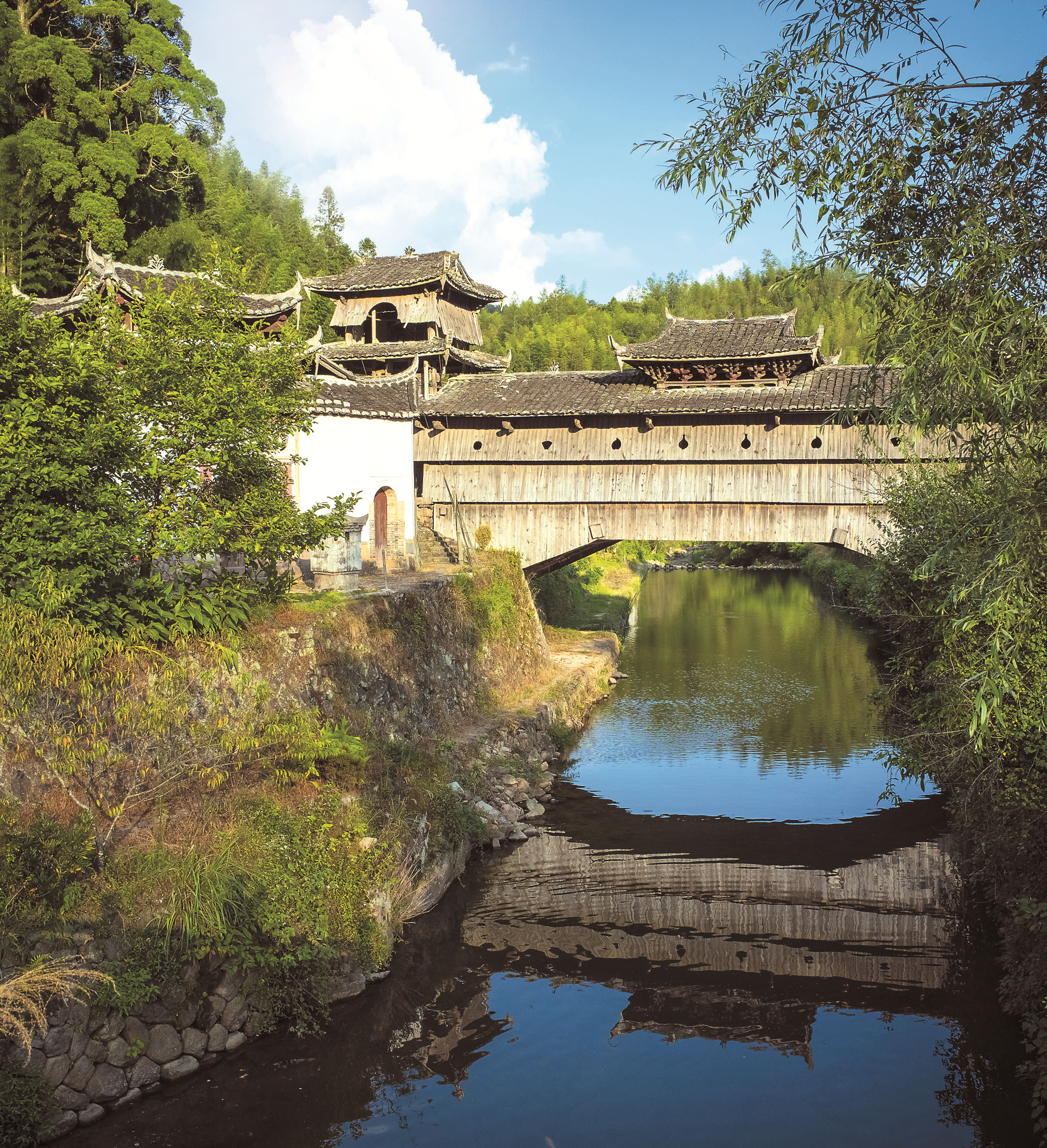 The Rulong Bridge blends perfectly with its idyllic surroundings.

The popular novel and Hollywood film “The Bridges of Madison County” made the historic covered bridges of Iowa a calling card of American country scenery. Much less known is an area in China where covered bridges are also distinctive heritage.

Counties along the border of Zhejiang and Fujian provinces also honed a tradition of building covered bridges centuries ago.

Today, those that remain lie hidden in the mountains, just waiting to be discovered.

Last September, three of the bridges in Zhejiang and four in Fujian were washed away by floods brought on by Typhoon Meranti. The ruination made the headlines. I was lucky enough to have visited some classic examples of such bridges before the typhoon struck.

Qingyuan County lies at the southwestern tip of Zhejiang Province, amid some of the highest mountains in East China. During the Emperor Guangxu’s reign (1875-1908) of the Qing Dynasty (1644-1911), 230 covered bridges were in service around the county, according to local archives. Today 97 are extant, forming the largest collection of historic covered bridges of any county in China.

On one side of the road was a succession of villages bordering a creek. It is a common feature for each of the villages to have a covered bridge, usually at the place where a creek and village part ways.

After passing through an upland 1,200 meters high, the road gently wound its way downhill. After some breathtaking hairpin turns, a lovely valley appeared, with rice paddies and orchards surrounding it.

Yueshan, a village at about 900 meters above sea level, lies tucked in the heart of the valley. The village is known as the “little kingdom of covered bridges.”

The first bridge I explored was Rulong Bridge, the “holy grail” for all ancient bridge seekers. Built in 1625, exactly on the spot where Juxi Creek exits Yueshan Village, the span is the oldest surviving wooden covered bridge in China. It wasn’t until 1997 that the bridge was “discovered” and designated a part of National Cultural Heritage.

At first sight, the covered bridges in this area of China are somewhat similar to their American cousins. They were all built in the countryside to provide a sheltered passageway across rivers and they all blend in with their idyllic surroundings. They made use of local timber. The plank sidings of many Chinese bridges even appear in the same red paint as the American ones.

But a closer look reveals differences. The American bridges are timber-truss bridges with covering added to protect the wood from weathering. The Chinese bridges, however, are timber-arch bridges, built by interlinking, or actually “interweaving,” a series of logs without using a single nail. Tenoned and tied up by rattan or ropes, the logs are compressed together by gravity to create a stable arch-like structure.

These structures date back at least 900 years. One finds reference to the “Rainbow Bridge” in Zhang Zeduan’s painting “Along the River During Qingming Festival,” a famous panoramic scroll dating from the 11th or 12th century. It was a similarly built bridge, but without a covering. Whether Rulong Bridge and its siblings are descendants of the “Rainbow Bridge” remains a mystery because no other examples have survived in North China in the manner depicted by Zhang in his masterpiece.

Timber-arch bridges, though largely robust, can succumb to the forces of nature. According to Mao Yisheng, a bridge expert and academician at the Chinese Academy of Sciences, forces from beneath pushing upward can upset the equilibrium of the bridges and cause them to disintegrate. That may explain why periodic flooding imperils the longevity of the bridges.

A covered superstructure gives the bridges an extra edge of stability against floods. With these superstructures, the bridges are functional beyond just crossing a stream. They can also be used as venues for village social gatherings. Long benches attached to both sides of the bridges provide rest stops for travelers, places for women to do handicrafts, and venues for peddlers to sell goods.

What’s more, these bridges are strongly associated with local religious beliefs and ceremonies. Many were built adjacent to temples. A pavilion-like structure is frequently fitted atop the roof to accommodate altars or shrines in the middle of a bridge.

The Rulong Bridge appears to be a deluxe version because it has three such pavilions. The one at the north end, which is overhanging and higher than the other two, serves as a bell tower. During traditional festivals, Yueshan villagers gather on the bridge to pray and start ceremonial processions. 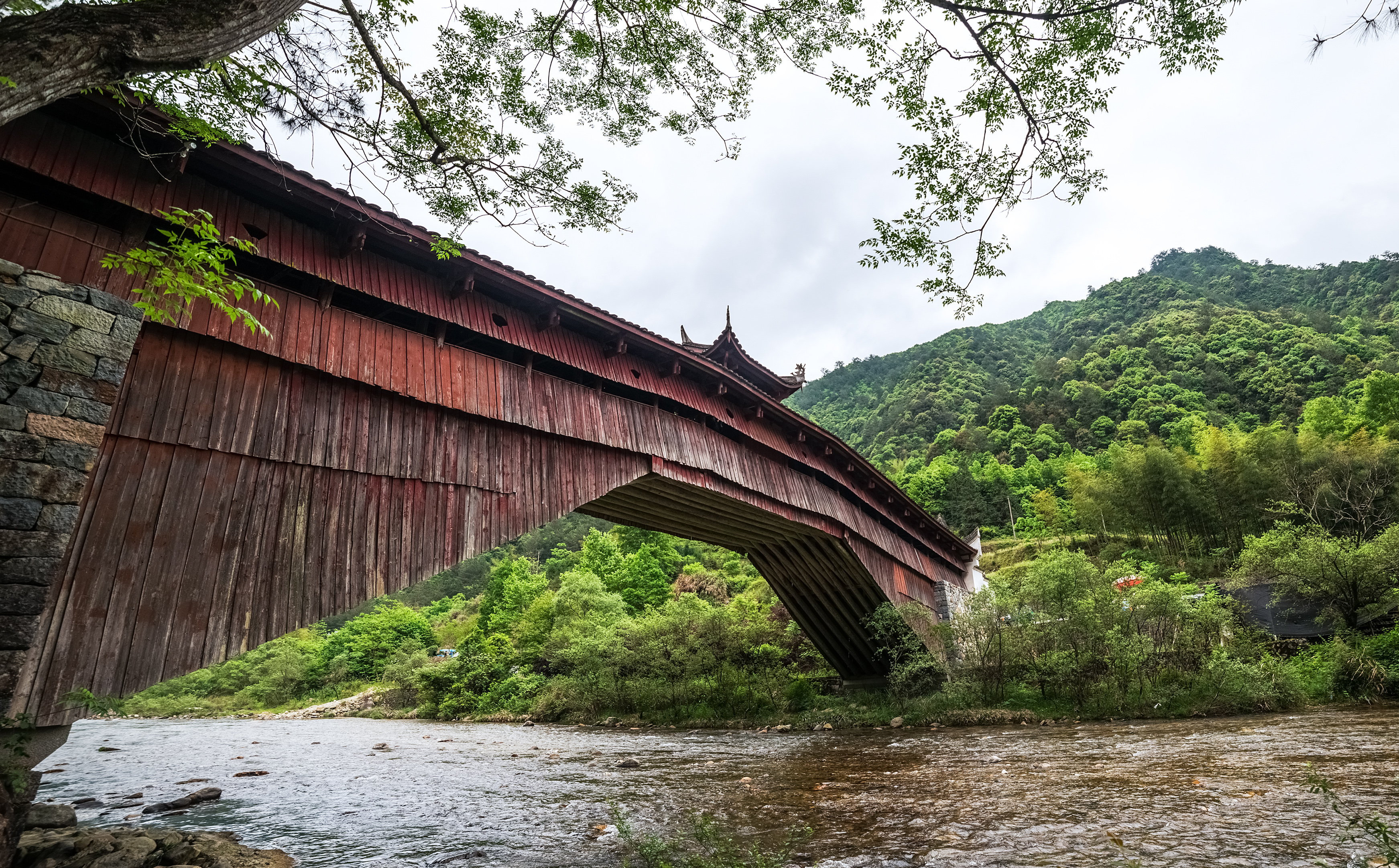 With its plank siding painted red, the Lanxi Bridge impresses visitors with its majestic appearance. 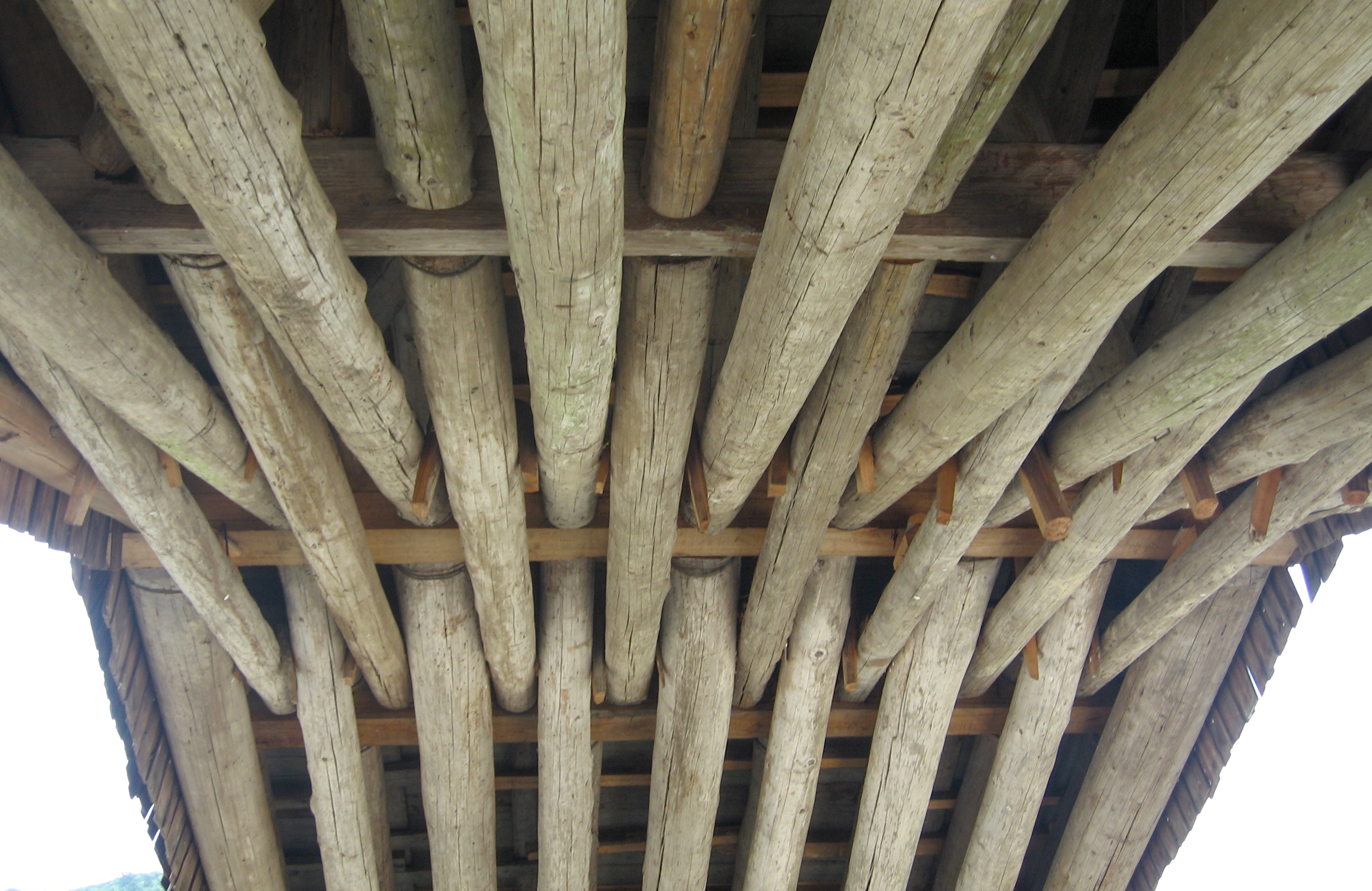 The Chinese-style covered bridge is built by interveaving a series of logs without using a single nail.

Yueshan was first inhabited around the year 1000 in the Northern Song Dynasty (960-1127) by a widow and her son Wu Xu. They were forced to leave the county seat and seek refuge in the mountains after the father of the family died.

Thereafter, the Wu family flourished in the pleasant climate of this little highland valley. The Wu clan placed a high value on education, and more than 200 of its members became scholars or government officials. Today, around 90 percent of villagers are still surnamed Wu.

From a vantage point on a nearby mountainside, it is easy to appreciate the exquisite design of the village, both from perspectives of aesthetics and geomancy. It was built alongside a crescent-shaped bend in Juxi Creek, against a small hill covered in neatly cultivated bamboo. The name of the village translates as Moon Hill.

Further downstream stands the stately Buchan (Into the Lunar Palace) Bridge, a welcoming landmark for those traveling to the village from Fujian Province. It was first built during the early Ming Dynasty (1368-1644), but what we see today is a reconstruction from 1916. Unlike the angular timber arch of the Rulong Bridge, it has a perfectly rounded stone arch to support the superstructure. The arch itself echoes the crescents of the village.

Coupled with the Rulong (Like a Dragon) is the Laifeng (Come a Phoenix) Bridge, sited where Juxi Creek enters the village. It also has a rounded stone arch. Two mini-sized wooden covered bridges, the Baiyun and the Gankeng, guard the spots where two tributaries of Juxi Creek join the mainstream.

The moon-themed design was masterminded by Wu Maoxiu (1603-74), a Yueshan-born official working for the Ministry of War in the last years of the Ming Dynasty. Following the defeat by the Qing army, he chose to retreat to his hometown as a well-respected country squire. He dedicated the rest of his life to transforming the village into a prosperous yet poetic place to live.

At the height of its development, the village boasted not five but 10 covered bridges of elaborate design within the short distance of a kilometer. Today the refinement and taste are still visible on the remaining bridges, in details such as the portholes on the plank siding, shaped like a cloud, a peach, a banana leaf, a calabash, an opened fan and other auspicious objects.

In spite of their arches, the Yueshan bridges all have level decks like their American counterparts. But in the same county there are also covered bridges that have decks arching up dramatically. These are called “centipede bridges” locally because they resemble a crawling, long arthropod. A brilliant example, the Lanxi Bridge, was found in an adjacent but much lower valley to the north.

As the longest single-arch wooden covered bridge in China, the Lanxi is an impressive structure to behold. Its plank siding is painted a bold red, and Hui-style whitewashed brick gates adorn both its ends. First built in 1574 during the Ming Dynasty, the bridge was moved to its current location, outside Xiyang Village, in 1984 when construction of a nearby reservoir threatened to flood it.

Also of interest is the adjacent Xiyang Temple, dedicated to a very special local deity. Qingyuan native Wu Yu (1130-1209) was the world’s first cultivator of shiitake mushrooms. Like all other pioneers of specialty crafts in China, he was later worshiped as a god, and the Xiyang Temple was built in his name in 1265 during the Southern Song Dynasty (960-1279).

Since then, shiitake cultivation has become a widespread trade in the area, peaking during the Ming Dynasty, when the county was granted the shiitake franchise by the Emperor Hongwu.

Rich shiitake merchants returned home and repaid country folk by investing in covered bridge projects because these bridges were so popular. They not only played a crucial role in the villagers’ daily lives but also served as vital links in the trail network of this mountainous region.

Today, shiitake remains a culinary delight in Chinese cuisine and an important industry in Qingyuan. But with rapid urbanization and the advent of motorways, the tradition of covered bridges is endangered.

In 2009, the design and practice of building timber-arch bridges in Zhejiang and Fujian provinces were included in the UNESCO’s list of Intangible Cultural Heritage Sites in need of “urgent” safeguarding.

Qingyuan County was the 2005 winner of the UNESCO Asia-Pacific Award for Cultural Heritage Conservation, in recognition of the restoration of covered bridges. 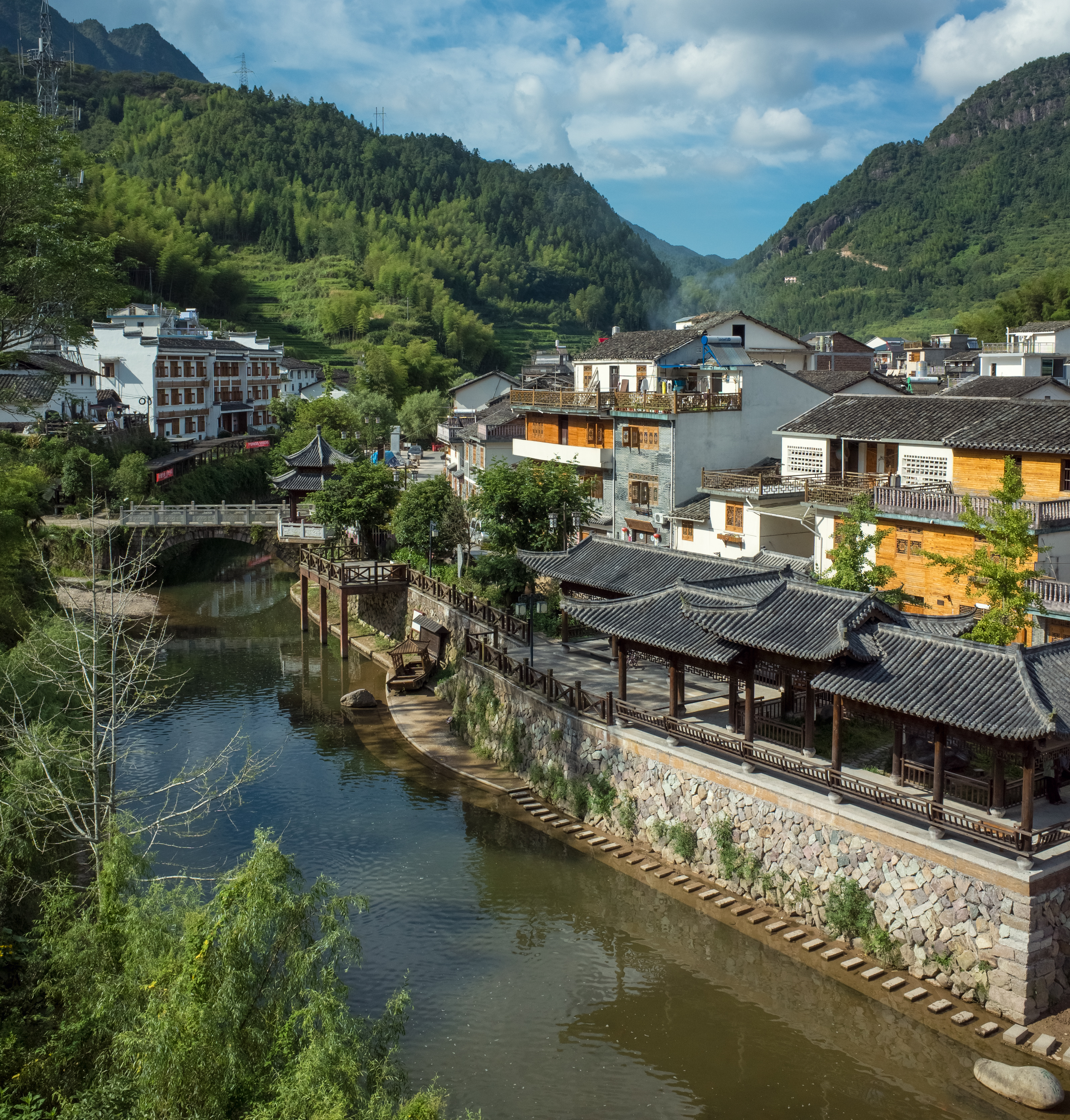 Yueshan Village is built alongside a crescent-shaped bend of Juxi Creek.

1. By public transport: The bullet train from Shanghai to Lishui takes around 2.5 hours. Change to a bus at the Lishui Railway Station heading for Qingyuan County, about 3.5 hours further on. Minibus service is available between Qingyuan County and Yueshan Village — four buses a day on a trip that takes 1.5 hours.