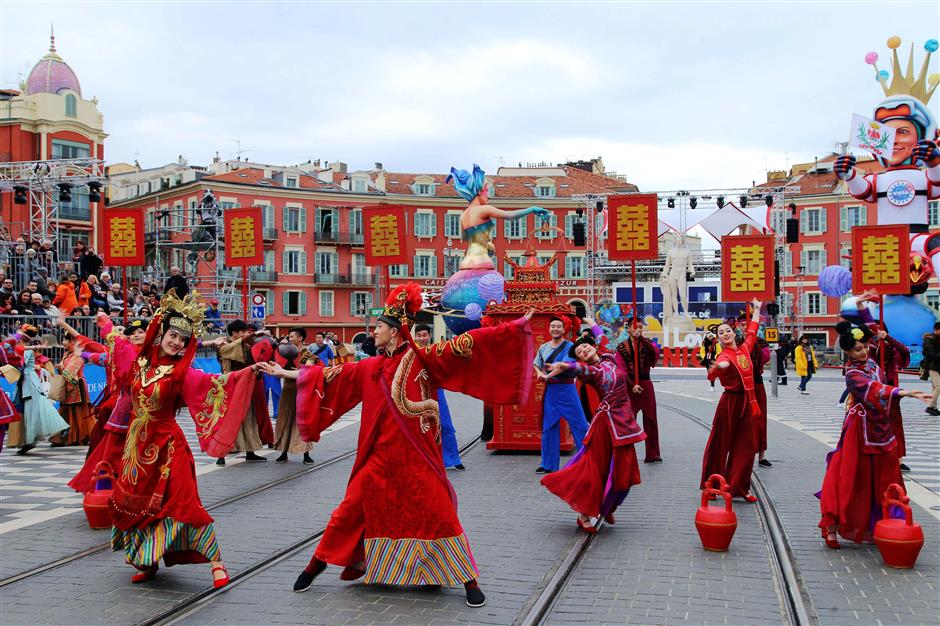 The Nice Carnival, one of the world’s most famous carnivals, is coming to China from September 28 to October 3.

The 2018 Ningbo-Nice International Carnival will be held in the coastal city of Ningbo’s Jiangbei District.

Ningbo government has imported the carnival to promote integrated development of cultural industry and tourism, build the city’s international influence, and explore new ways to bolster the city’s competitive and innovative image.

Li Zhemin, deputy director of the organizing committee office for the 2018 Ningbo-Nice International Carnival, said the event will bring new dynamics to local tourism and Ningbo’s neighboring cities, strengthening cooperation in industries such as traditional manufacturing, modern services, education and healthcare between Ningbo and Nice.

When the carnival is over, Ningbo will build a carnival-themed park to boost international tourism.

Ningbo, a hub city in the “Silk Road Economic Belt” and the “21st Century Maritime Silk Road,” is a port city as important as Nice, and the two have a similar city ambience and port culture, providing a good foundation for mutual cooperation.

Nice is the fifth most populous city in France and the country’s second largest tourism destination next to Paris. With its 7,500-meter coastline, Nice attracts millions of tourists every year because of its pristine beaches and mild Mediterranean climate.

The Nice Carnival is held every February in the French Riviera resort.

Every year, a special theme is chosen, and artists create floats with figurines in papier-mache for a colorful parade.

The theme for this year’s Ningbo carnival is “King of Space,” and a floral float named “King of Infinite space” will reach a height of 22 meters and weigh over 15 tons when put together.

Seven original floral floats, five large-scale mechanical figurines and 40 mascots of various sizes are being imported from Nice in parts to be assembled by technicians from both cities. 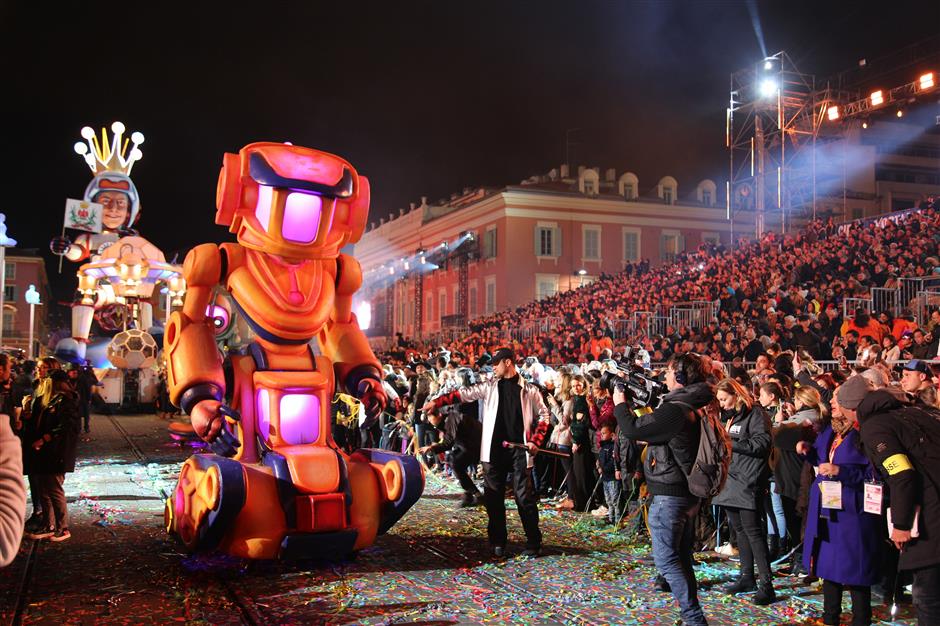 Floats with figurines in papier-mache during the parade in Nice

During this year’s carnival, floral float parades will take place from 2pm to 3:30pm and 7:30pm to 9pm every day, featuring “flower battles” where costumed models parade on flower-covered floats and throw a hail of flowers to onlookers.

On each float, there will be one “float goddess” handing out flowers to visitors. Six of the float goddesses will come from Nice and another six have been selected from the Float Goddess Pageant.

All the floats adopt solid tires to carry large-scale figurines mounted on top of the vehicles, such as the “King of Infinite Space,” “the Queen of Infinite Space” and the “Black Hole Monster.”

An area close to 10,000 square meters will provide visitors with stalls selling Chinese and French cuisine, souvenirs and cultural items.

During the carnival from 1:30pm to 2pm and 7pm to 7:30pm every day, visitors will see performances by 10 art troupes from around the world and interactive processions. A Ningbo local procession will bring a touch of Ningbo’s cultural elements to the carnival.

In 1873, a committee was created for the carnival, headed by local artist Alexis Mossa, with later contributions from his son Gustav-Adolf Mossa. The carnival was reinvented as a parade, adding masquerades, paid seats on floral floats and competitions. Today the event attracts over 1 million visitors to Nice every year. The carnival spans a two-week period in February. 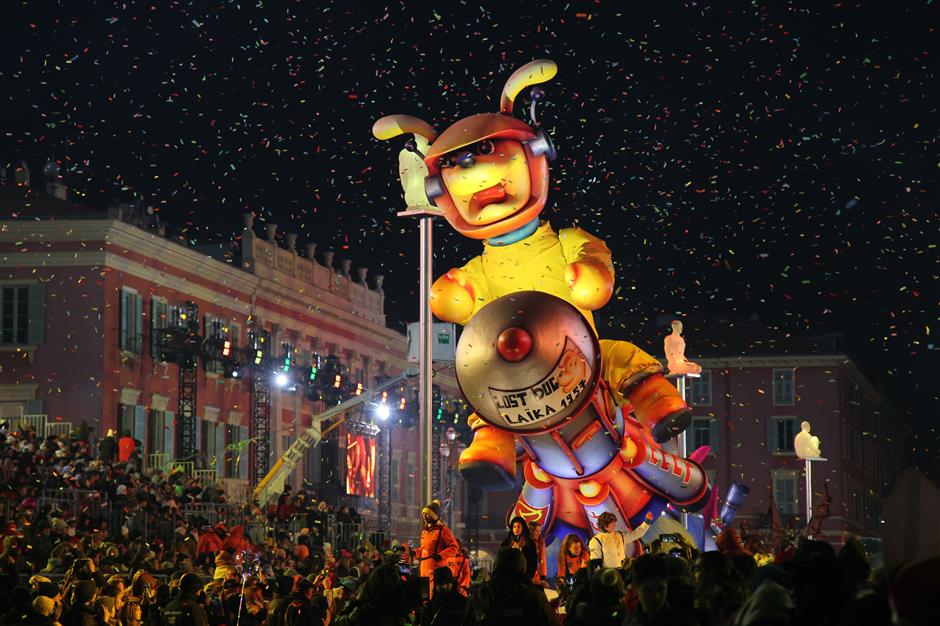 Floats with figurines in papier-mache during the parade in Nice

How to get to the carnival:

The organizing committee recommends the visitors to take the high-speed train from Shanghai to Ningbo, then change to Ningbo’s Metro line 2 within Ningbo Railway Station to Nijiayan Station, and take the shuttle bus to the carnival.

Visitors can get tickets on the carnival’s official WeChat account “蜗牛游世界”(scan the QR code below) or at the event. 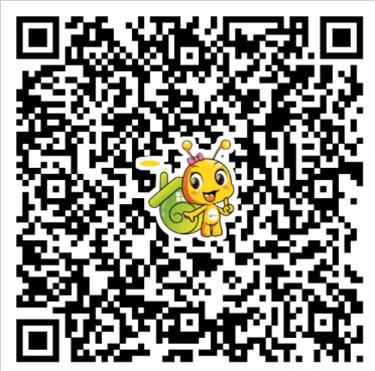 ﻿
Special Reports
ADVERTISEMENT
61793
,
Yuhang policy bears fruit in tea culture
An ancient king who carried cultural secrets to the grave
Old train stops at Dongxia to recall the good old days
As tourist stops go, one village is a different kettle of fish
Sanya a tropical paradise packed with scenic delights
Suzhou: an autumn paradise 'where dreams come true'
'Tis the season to venture out and relish 'the year's last, loveliest smile'
Holiday bummers: the overrated and the underwhelming
As watertowns go, a genuine gem sits in 'backyard of Shanghai'
Strolling along latest downtown attraction, finding nice surprises
EXPLORE SHINE