The annual Dried Bog Festival is in full swing at the Xixi Wetland Park through January 15. Visitors can rent waterproof pants and bags used by local fishermen to catch fish. If they manage to dig through the sludge for fish, they can keep it or have it cooked according to their personal taste at local family-run restaurants.

At the opening ceremony on November 19, organizers hosted a ritual to worship the bogs, praying for a good harvest in the next year. This tradition has been carried down for generations, as the wetland's original residents made a living catching fish in ancient times.

On the first day, the biggest fish caught weighed 23 kilograms, but was then released according to folklore. Five wild brocade carps were also released, since this variety of fish was kept for decorative purpose in ponds rather than for cooking. 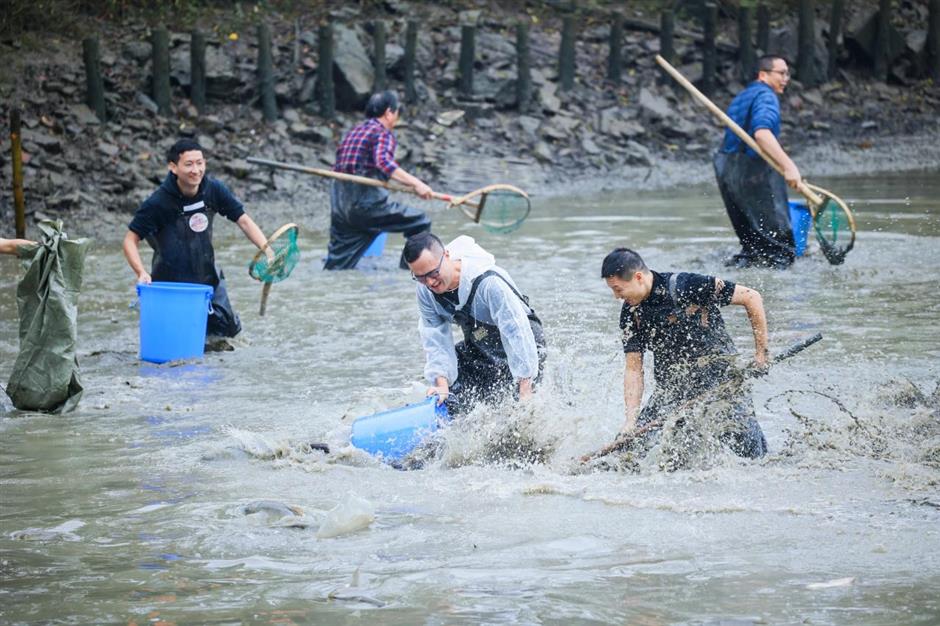 Visitors dig through the sludge for fish during the Dried Bog Festival.

Xixi is dotted with 1,066 marshes and ponds with an abundance of aquatic animals. The locals have preserved a tradition in winter: They drain away the water, pile up silt at the water banks and catch fish.

The fish are considered the most delicious in winter, as they've been kept in the marshes for around a year.

Besides, the practice has helped maintain the ecological balance in the area for centuries. Cleaning up the silt provides aquatic animals with a favorable environment. The piled silt creates rich, fertile soil for mulberry, willow and persimmon trees growing on the banks. The fish are then exposed at the bottom of the dried marsh.

These carp from the crisscrossed waters feed on snails, and are considered to be one of the very best varieties of fish featuring soft meat and rich protein. 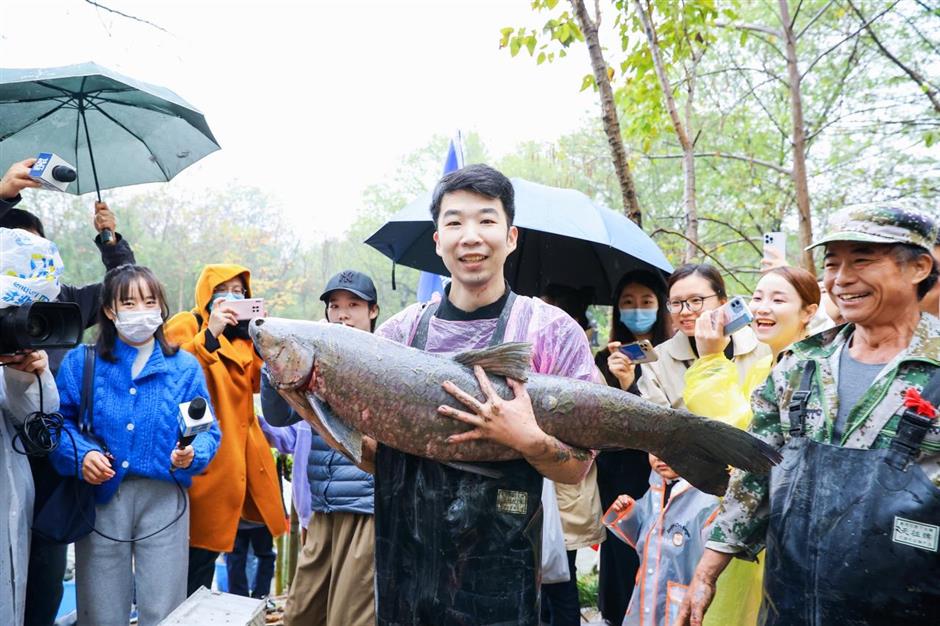 A visitor is all smiles, holding his biggest catch from the bog. As permitted, he can keep the fish or have it cooked at a local family-run restaurant.

The festival has always given the fishermen a reason to celebrate. Meanwhile, it is also an opportunity for visitors to help farmers clean the slippery silt in the bogs and experience how the ancestors lived in ancient times.

Through January 15, vendors will be setting up food stalls to sell their fresh catch and fish ball soup at weekends. Visitors can savor all kinds of local dishes made of fresh fish and vegetables at the Yanshui Yuzhuang Restaurant in Xixi Wetland.

If you prefer red meat to freshwater fish, the 17th Yangguo Festival in Yangguo Village of Yuhang District is highly recommended.

Yangguo Village has a 200-year tradition of cooking mutton dishes in winter. Though the hamlet only has 11 eateries, it can accommodate more than 3,000 diners at once after years of upgrades and development.

Each of them has a secret recipe, which helps distinguish their own dish from the others. Some recipes date back hundreds of years, and only a few are handed down to family.

The locals buy live goats and sheep before slaughtering them and selling the meat. During this period it's common for most households to have a sizzling pot of braised goat on the stove every day.

As in previous years, the festival runs through Chinese New Year, which falls on January 22, 2023.

"Although prices are going up fast, we stick to our original price," said Wang Rongfa, vice deputy secretary of the Yangguo Association.

Yangguo's red-braised mutton is famous for its flavor, aroma and tenderness. Unlike the pale boiled goat soup from the pot, this braised mutton tastes more mellow with an umami flavor.

Over the past 15 years, about 5 million visitors have flocked to the village to sample its appetizing dishes.

Instead of using a modern cooker, locals prefer a traditional clay stove to simmer the meat. The pot is a steel cauldron that can cook an entire animal. Traditionally, locals only cook 1 to 2-year-old lambs weighing around 7 to 13 kilograms.