Healing in the traditional Chinese method 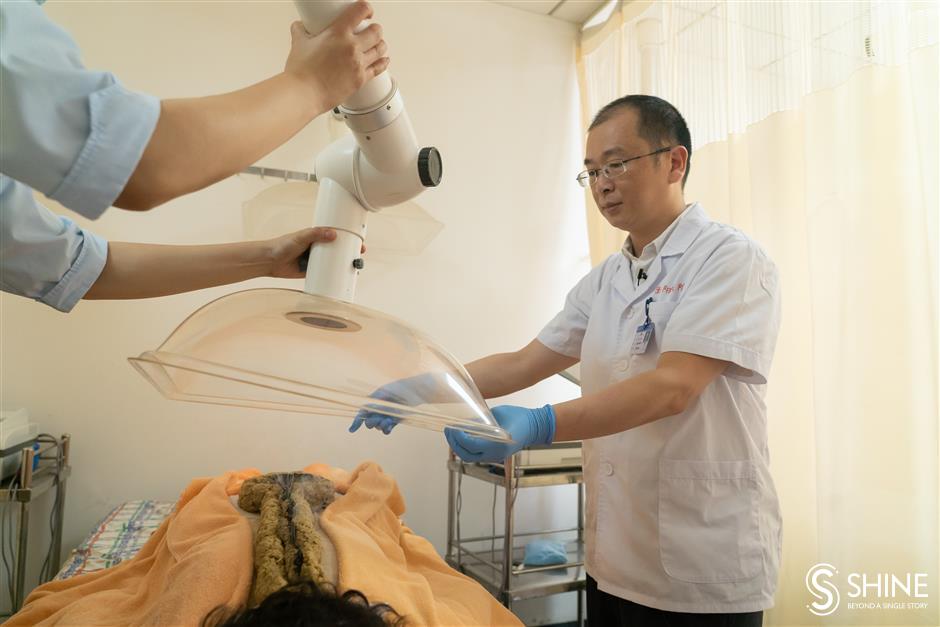 Zhou gives a moxibustion treatment to one of his regular patients. The ground ginger and moxa sticks lit on her back are aimed at helping her regain the energy of life.

Dr Zhou Yang works in a setting that looks more like a traditional Chinese salon than a hospital.

Wooden benches line the waiting hall. Red lanterns hang from the ceiling. A row of traditional Chinese pharmacy-style medicine cabinets flanks a wall behind a counter.

He has been working there for years, giving patients physical examinations and prescribing treatments according to traditional methods.

The morning exams are quite popular. People line up there every day for tests on their tongue coating, pulse and meridian, or jingluo, in traditional medicine terms.

“Common health examinations aim to detect structural change in bodies, such as nodules in lungs, cysts in the liver or biochemical indexes in the blood,” Zhou says. “These examinations try to find problems that may affect living quality.”

He adds, “It’s common that your blood test may show perfect results and the ultrasound doesn’t find anything abnormal in your organs, but you still don’t feel well here and there. You may suffer from chronic pain in the shoulder blade, diarrhea with no specific cause, insomnia, or severe menstrual cramps in the case of women. We try to detect the problems with TCM theory and prescribe multiple means of treatments.”

Zhou has been a practitioner of traditional Chinese medicine since he began his career 15 years ago. He doesn’t have any dramatic story to tell about his reason for choosing this line of work, other than his belief that his skills were needed.

But there are stories that explain his passion for what he does. One that stands out in his memory was a patient suffering from severe insomnia.

“Before he came to me, the man had been to many doctors and tried everything he could, but the condition worsened,” Zhou recalls. “He was prescribed with various types of sleeping pills, including Diazepam. But gradually he built up a resistance to the drug and even the strongest dose of Diazepam couldn’t give him a full night’s sleep. I was the last straw for him.”

Zhou designed a therapeutic schedule that included both an herbal concoction and common sleeping pills.

“My plan was to adjust the dosage according to his condition, first reducing the dosage of sleeping pills gradually if he slept better, and then reducing the herbal medicine as well,” he explains.

Zhou was not sure how his prescription would affect such an acute case of insomnia, but to both his and the patient’s relief, it worked. 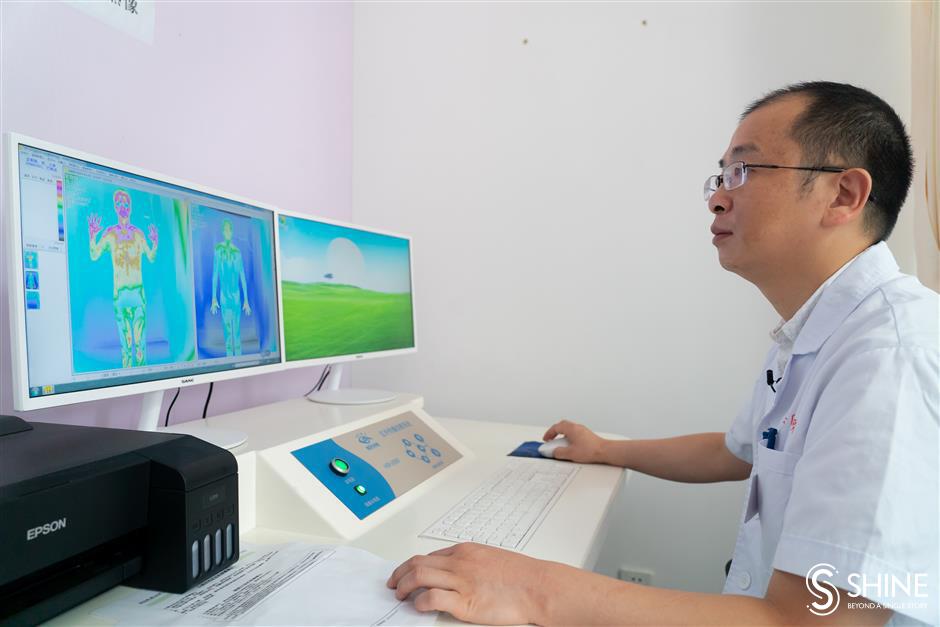 Zhou checks a patient’s meridian, or jingluo, with a machine.

“After three to four months of treatment, the patient could finally fall asleep all by himself, with no medical intervention,” Zhou says. “The concoction worked because the herbs I used didn’t force sleep, like sleeping pills do. Rather, they reduced anxiety and soothed the nerves, which I think got to the root of his problem. Most insomnia cases are related to mentality.”

This early case in his career encouraged Zhou to further his study on various means of traditional treatment, such as acupuncture, cupping, plaster and scraping therapy, to improve living quality and relieve pain. Some new methods have been introduced.

For example, ancient Chinese music is now used to treat insomnia at the center. Zhou says the concept of the five elements, or wuxing, is found in every corner of traditional Chinese medicine theory. Wuxing — metal, wood, water, fire and earth — corresponds with five main musical notes used in ancient Chinese music — gong, shang, jue, zhi and yu. Doctors choose different music for patients, according to their constitutions.

Although traditional medicine often comes under challenge by doctors studying modern medicine, Zhou disputes the idea that it works mainly as a placebo. Such a debate is really unnecessary, he says. The important thing is what works for patients.

“TCM doesn’t need to be antagonistic to modern medicine and vice versa,” he says. “Patients don’t have to choose one over the other. Our goal is to serve patients, and if patients are satisfied with the effect of our treatment, then it works.”

A regular patient of Zhou’s, who identifies herself only as Zhang, agrees with him. The woman, who suffered extreme intolerance to cold, has been receiving moxibustion treatment — burning dried mugwort and other herbs on particular points on the body — for a couple of months.

“Even in May, when the temperature was nearly 30 degrees Celsius, I had to wrap myself in a thick comforter and wear long johns and wool socks when I took my afternoon nap,” she says. “But I still felt too chilly to fall asleep. It was certainly not right.”

According to Zhou, Zhang’s symptom was caused by a lack of yangqi, or energy that keeps people alive, according to traditional medicine theory.

“Lacking yangqi is like a smartphone on low battery or flowers that wilt without sun,” Zhou explains.

The moxibustion treatment helps Zhang regain yangqi. Under Zhou’s prescription, a therapist first rubs massage oil on her back, and then rubs her back with two pieces of warm ore that look like black cobblestones until her skin turns reddish.

Then the therapist piles warm ground ginger along her spine, all the way from the back of the neck to the hip, and puts moxa sticks on the ginger. The next step is to ignite the moxa sticks until smoke comes up. Zhang lies on her back in the smoke for about half an hour.

“After just one session I felt warmer all around. And they allowed me to take the ground ginger home and have a foot bath with it before I go to sleep. Tell you what, after I tried it, I fell asleep two seconds after my head touched the pillow.” 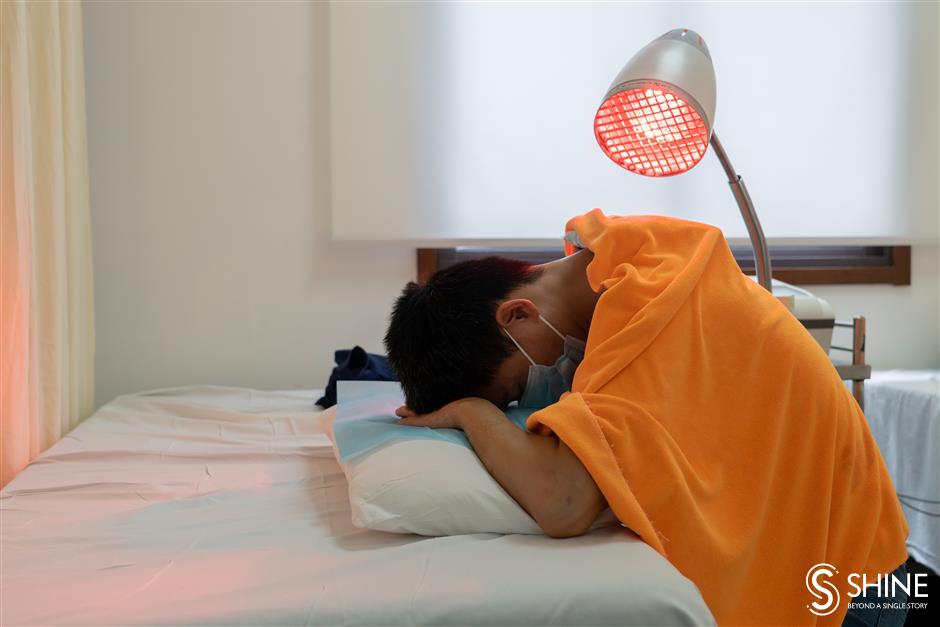 A remedy is applied on the back of a patient to improve the effects of guasha, or “scraping therapy.”

﻿
Special Reports
﻿
61768
,
61875
,
Healing in the traditional Chinese method
Survival of the fittest: an industry in the throes of recovery
Fitness industry bent into new shape after epidemic
School's back, but this time the return is a challenge of sorts
Cleansing vital to prevent eyelash mites
Special lenses help short-sighted children
Increase in number of patients with dry eye
Online resources help minds, bodies stay fit amid confinement
Chinese medicine: defenders and doubters
Zhejiang medics back home after heroic efforts in Hubei
EXPLORE SHINE