As production in the majority of Shanghai factories picks up speed and workers return, Shanghai Daily visited the Lingang New Area, an industrial zone in China’s commercial center, where Tesla has its Chinese production site.

The car maker’s gigafacotry has resumed production of its Model 3 vehicles and is operating at full capacity.

Shanghai Lingang Economic Development (Group) Co, the zone’s developer, has about 1,100 foreign-funded companies in its various estates around the city, along with a couple of thousand Chinese ones.

In the Lingang New Area alone, every company with annual production value of 100 million yuan (US$14 million) and above is back to work.

As of Tuesday, more than 70 percent of enterprises in the city had resumed work along with 93 percent of the regional headquarters of multinationals.

“On February 10, we resumed work as usual. On the first day, we had about 50 percent of workers back, and now after two weeks, we have about 75 percent,” said Richard Cheung, managing director of Plansee Shanghai High Performance Material.

The Austrian-headquartered group opened its Shanghai production site at Lingang in 2013, and has suppliers across the country and customers across the world. 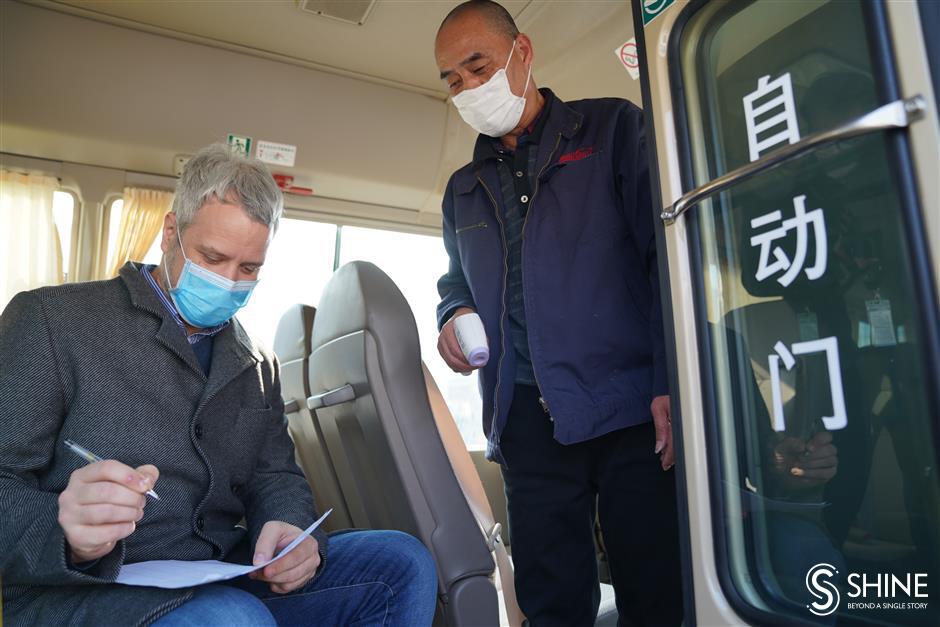 German engineer Hennrik Schmidt has his temperature taken as he gets on a company shuttle.

At its Shanghai plant, company shuttles parked outside the gate as workers had their temperatures taken by guards in protective suits, changing their own masks to new ones provided by the company before starting work.

Shanghai Daily’s visitors were asked to fill out a detailed form about their health and travel history, before getting their temperatures taken and being disinfected. Traveling between different areas in the zone and different companies, the procedure is repeated.

The company’s canteen provides lunch boxes rather than catering, and only two workers eat at each six-person table, with a board between them. Workers are also advised to smoke less, and to keep a distance from each other in the outdoor smoking areas.

Those returning from hard-hit areas are required to be quarantined for 14 days and masks are required in all areas and at all times in the plant. 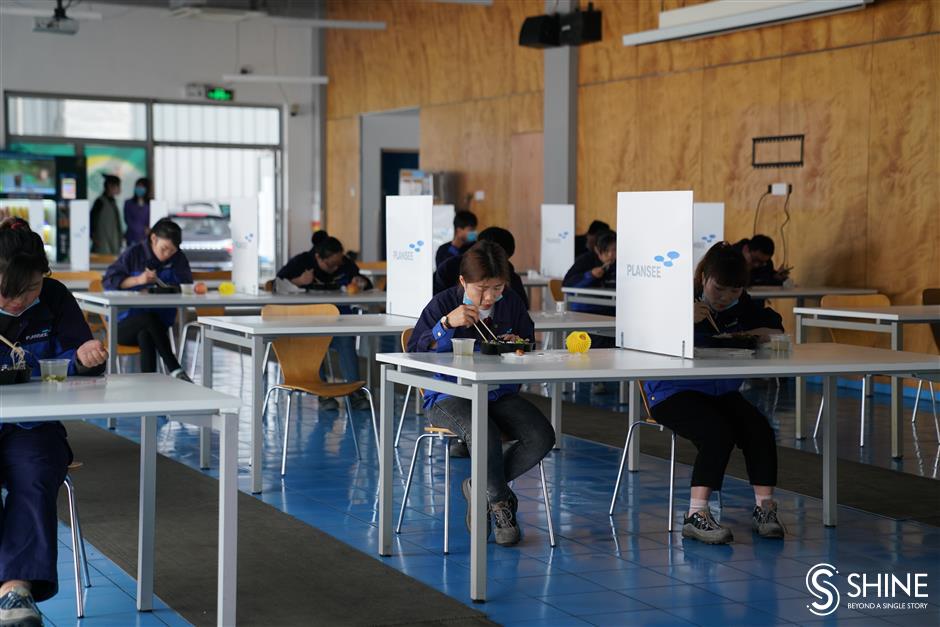 Plansee's canteen, with a capacity of more than 100, now limits around 30 workers to one sitting, with just two people having lunch at each six-person table and a board separating them.

All the measures taken by Plansee and other companies are to ensure a balance between the health of workers and safe production.

“I never had a thought to cancel or delay much of my arrival to Shanghai,” said Christian Loeffler, a German project manager at Plansee originally set to start his new contract and arrive in Shanghai on February 1.

His plans were disrupted as European airlines started canceling flights to China, but he finally got rebooked and arrived on February 10.

“You need to have a rational thought about what is happening,” he said. “For me, it’s not super critical in mind. It’s an unknown virus and there is no vaccination, but I feel perfectly safe here in Shanghai. There are lots of procedures which help to kill the virus in small communities. And my company helps to eliminate some of the issues, such as arranging pickups so that we don’t have to use the Metro.”

His colleague in R&D, development engineer Hennrik Schmidt stayed in China as news of the epidemic broke. He never considered leaving even as he realized it was more serious than when he first heard of it.

“Of course I have prepared for it. I actually feel quite secure if I take care, and I have my job here,” he said.

“It has been very well-managed in the company. Of course, it is different. Right now, there are no business trips, and I handle a lot of communications digitally. Some projects got a bit delayed because of suppliers. But this is just a small delay, nothing serious.”

Shanghai’s governments and residents have been praised for handling the epidemic quickly and efficiently. As of midday on Wednesday, there had been 336 confirmed cases, 272 recoveries and 2,263 suspected cases in progress, in a city of more than 20 million residents. 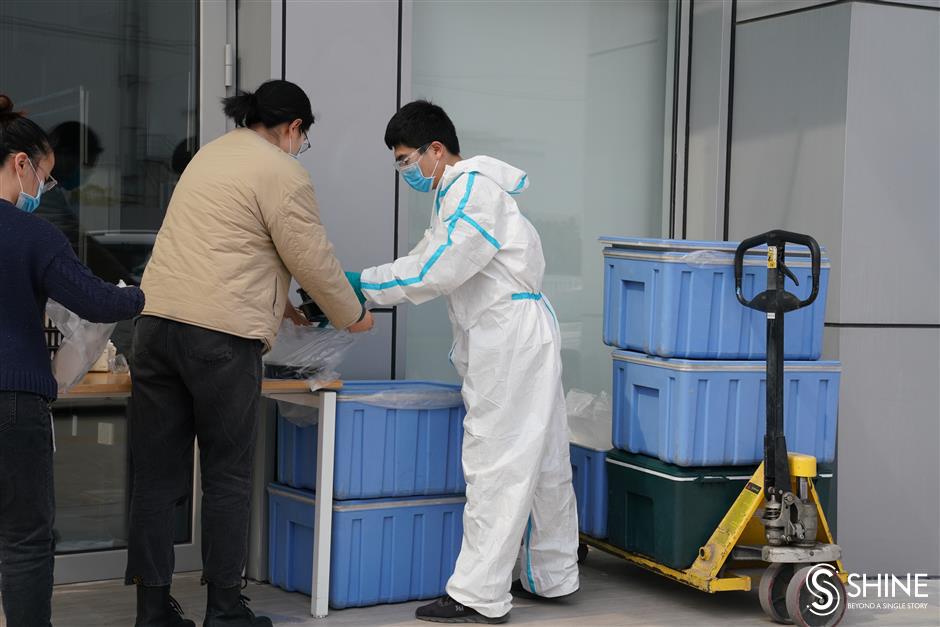 Many companies are handing out lunch boxes instead of their usual canteen services.

As people began to return to work from February 10, relevant departments took note of the challenges confronting companies early on and provide support, particularly in assisting in the purchase of protective equipment and helping with supply chains.

Companies have also been creative in solving problems and helping each other, such as suggesting workers return earlier, hiring temporary workers to fill in for those not yet back, and contracting workers with other companies.

For instance, many restaurants which were closed and others that had few customers contracted some of their staff to companies which were faced an increasing demand for food deliveries.

In the Lingang area, an epidemic prevention liaison system that the group set up in 2003 during the SARS outbreak was quickly adopted, while many in the group started work on Chinese New Year’s Day to prepare plans for possible scenarios.

“We set up a virus-prevention work group and put the liaison system into effect immediately, to safeguard transparent information to companies and help with their needs as much as possible,” said Lu Chun, innovation and industrial development office director with the Lingang group.

“Many companies related to fighting the virus, such as thermometer producers, also started their contributions to the city early on.” 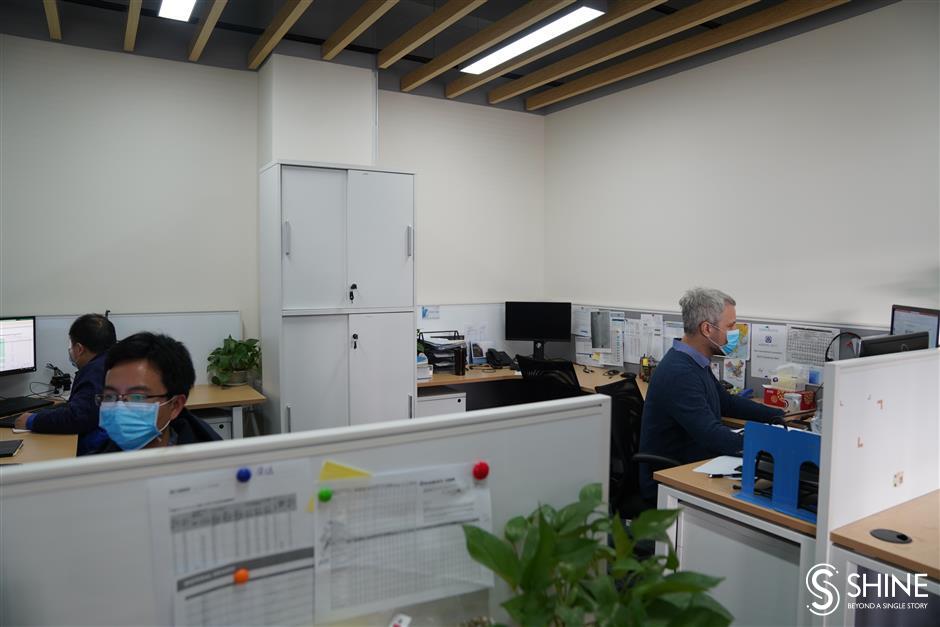 Masks are required to be worn in all areas and at all times.

Cheung, Plansee’s managing director, cited purchasing masks and delays in some supplies from virus-hit areas among the most challenging aspects, while he remains positive about quick and safe recovery overall.

“We are very confident that the novel coronavirus can be handled by the government,” he said.

“We are also confident that after the virus the economy will come back to normal in a couple of months. The challenge is again our suppliers and we are discussing with our suppliers, some in Hubei Province, who can’t answer when they can get back to work. But in the end, we will win.”