Parenting is no easy job, and when it fails, children can slide down a slippery slope into antisocial behavior or criminal activity.

One solution is a concept called parent education, which brings together young people and parents to try to work through problems of communication and understanding.

The idea proved a godsend for a Shanghai father surnamed Zhang. He divorced his wife when his son Black was 6 years old and took custody of him. But Zhang was too busy with his job to spare much time for his son, so grandparents cared for him.

“I always waited for my dad,” said Black. “But he always seemed dissatisfied with me. He was ill-tempered, like a tiger.”

When Black was in junior middle school, Zhang discovered that the boy was interested in rap music, not academic subjects. The boy would slip away from home late in the night to meet friends in a cybercafé.

Some of them were the wrong kind of friends, who drank a lot of alcohol and got into fights.

To try to control his unruly son, Zhang started to shift his focus from his job to home. He tried many methods, stern and soft, to try to reform Black and even asked social workers for help. Nothing worked.

During the summer vacation of 2018, Black, then 16, ended up in a hospital with a bandaged head after a gang scuffle. It started after Black and some friends arranged to meet members of a gang over a personal dispute. The gang appeared with weapons in hand.

The police were called and Black, along with others, were referred to the procuratorate in Baoshan District.

Afraid that this was just the start of a downward spiral that would ruin his son’s future, Zhang started studying aspects of juvenile law and talked with Chen Yiyi, the procurator in charge of Black’s case.

“Not all of the young militants are despicable and unforgivable,” Chen told Zhang. “They are just too reckless. Black was just being loyal to his friends.”

Zhang was told that the criminal record of a minor sentenced to no more than five years in jail can be kept sealed. And because Black was sorry for his behavior, he was put on a one-year probationary period. 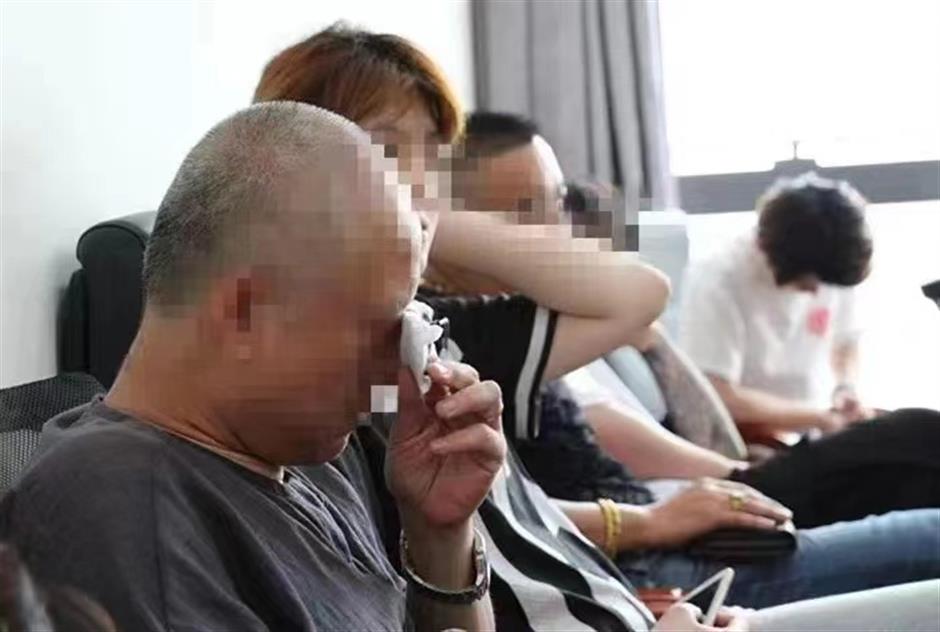 A father weeps during a session of parent education of Baoshan District's procuratorate.

Zhang and his son were also referred to classes in parent education in the summer holiday that year.

Parental education became a popular concept in Europe and America in the 1930s. It was introduced into the Chinese mainland in recent years.

It aims to rebuild broken relationships between juvenile offenders and their family members.

“The source of many problems rests in the fact that parents don’t know how to get along with their children and help them go through adolescence,” Chen said.

Jin Beibei, a psychology teacher in parent education and one of 15 professionals in the procuratorate’s psychology expert database, said she doesn’t like to refer to such juveniles as “young offenders.”

“Rather, they are children who love messing about,” she said. “When something becomes a barrier on the path of growth and makes them uncomfortable during adolescence, they will mess about with their lives and even society. They need parents’ help.” 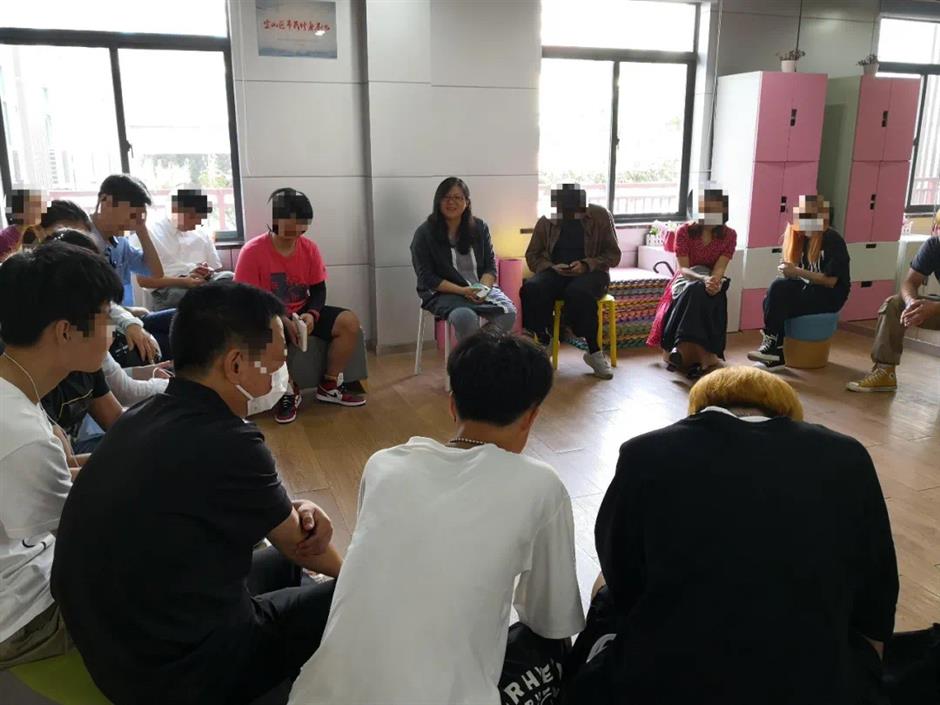 Parents and teenagers take part in the parent education of Baoshan District's procuratorate.

In the beginning, Zhang was surprised by the program because he thought his son needed education, not him. But he attended the classes.

In one class, families have to play parent-child games, such as role reversal, drawing one picture together and doing short sketches. During the process, Jin coaches the two generations on how to work together.

She praises the children when they do something right, as a cue to parents that they need to recognize the merits of their children.

After a few classes, Zhang started to share stories of his own rebellious adolescence. Many other parents and children also opened up about their feelings and experiences. Some were moved to tears.

Black learned listening and began to understand how to help his "tiger" father calm down. Zhang found the patience to listen to rap music his son wrote.

“Some of the lyrics are quite touching,” he admitted.

With the newfound support of his father, Black is hoping to record a rap album soon.

“With technology, everything is changing so fast,” Zhang said. “Parents need to think hard about keeping pace with their children.” 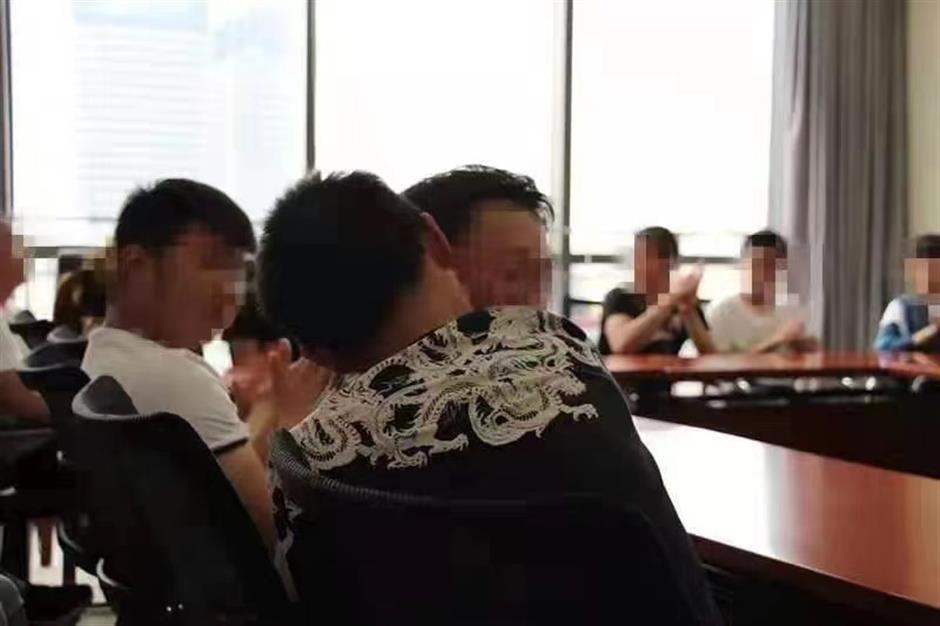 A teenager hugs with his father during the parent education of Baoshan District's procuratorate.

Jin said that society has long focused on the plight of “left-behind” rural children whose parents have gone to work in cities, but now it’s time to also pay attention to urban children whose working parents don’t have enough time to spend with them. As a result, neglected children, she said, can fall into bad company.

Parent education was introduced in Baoshan in 2017.

“It’s not mandatory, and many parents say they have no time for the classes,” said Sun Lijuan, deputy director of juvenile criminal prosecution. “But some 150 families have participated so far, to good effect.”

Many cities in China, like Chengdu and Hangzhou, have made parental education compulsory for families of juvenile offenders. China’s Law on the Prevention of Juvenile Delinquency, which will take effect in June, stipulates that parents or other guardians can be ordered to undergo parent education.