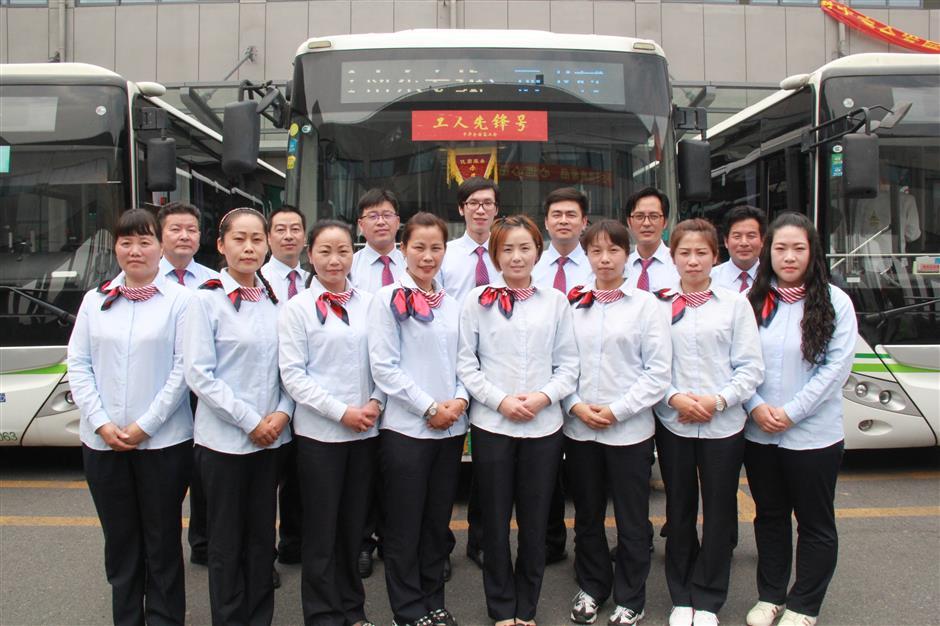 A group photo of workers for the Nandong Special Line

Starting from Nanmen bus station and passing through Dongping National Forest Park, Sanmin Village, Qianwei Village and other popular scenic spots, the Nandong Special Line of Chongming Bus plays a major role in public transportation on the island, serving an average of 4,000 passengers every day.

The 10th China Flower Expo will kick off in Chongming on May 21, and the special bus line that stops at the expo park will serve even more passengers.

The bus line and its staff have received a number of local and national honors over the past few years.

At Nanmen bus station, a Nandong Special Line bus is set to leave. Conductor Gu Shenhong has been waiting at the door of the bus for five minutes, which is part of the service.

“Many of our passengers are tourists who are visiting Chongming for the first time," Gu said. "They are not familiar with the routes, so they often ask us for details and we sometimes have to work as part-time tour guides. We introduce the tourist attractions along the way, the bus lines that can be transferred to, the locations of the bus stations and so on, so that passengers won’t spend unnecessary money or take the wrong route.”

Gu and her colleagues also provide convenience bags, motion-sickness pills and Chongming maps in the carriage. Announcements are in the Chongming dialect and Mandarin.

They are patient with all passengers, and try their best to answer their questions. Bus drivers strictly abide by traffic laws and regulations, drive in a polite way — “smooth start, smooth driving and smooth parking” — to ensure a safe journey.

The drivers and conductors of the special line all wear uniforms and treat passengers with sincere hospitality.

They believe that they can win the respect and trust of passengers if they provide quality service and influence the people around them with their sincerity.

More than 700 days of protection

The crews of the special line are highly skilled, forming a team full of positive energy.

Two years ago, a “special” passenger took the line. Aunt Tong, who was over 70 years old, suffered from Alzheimer’s disease. She often went out for no reason. She liked to take the special line, but always lost her way.

Aware of this, her husband, Uncle Gu, asked the crews to avoid letting his wife get on the bus alone.

So all the drivers and conductors of the special line served as guardians of the woman for more than two years.

“Every time we arrived at the stop near Aunt Tong’s home, we would pay special attention," said Shi Huihua, a driver for the line. "If we saw her, we would try our best to stop her from getting on the bus."

Conductors Lu Yunxia, Jiang Fengqin and Wu Liu said that for safety concerns, if Aunt Tong was found alone, the drivers and conductors would patiently persuade her not to get on the bus.

When she insisted on doing so, she would be seated and watched closely.

“We have been protecting her for more than 700 days,” Lu said. 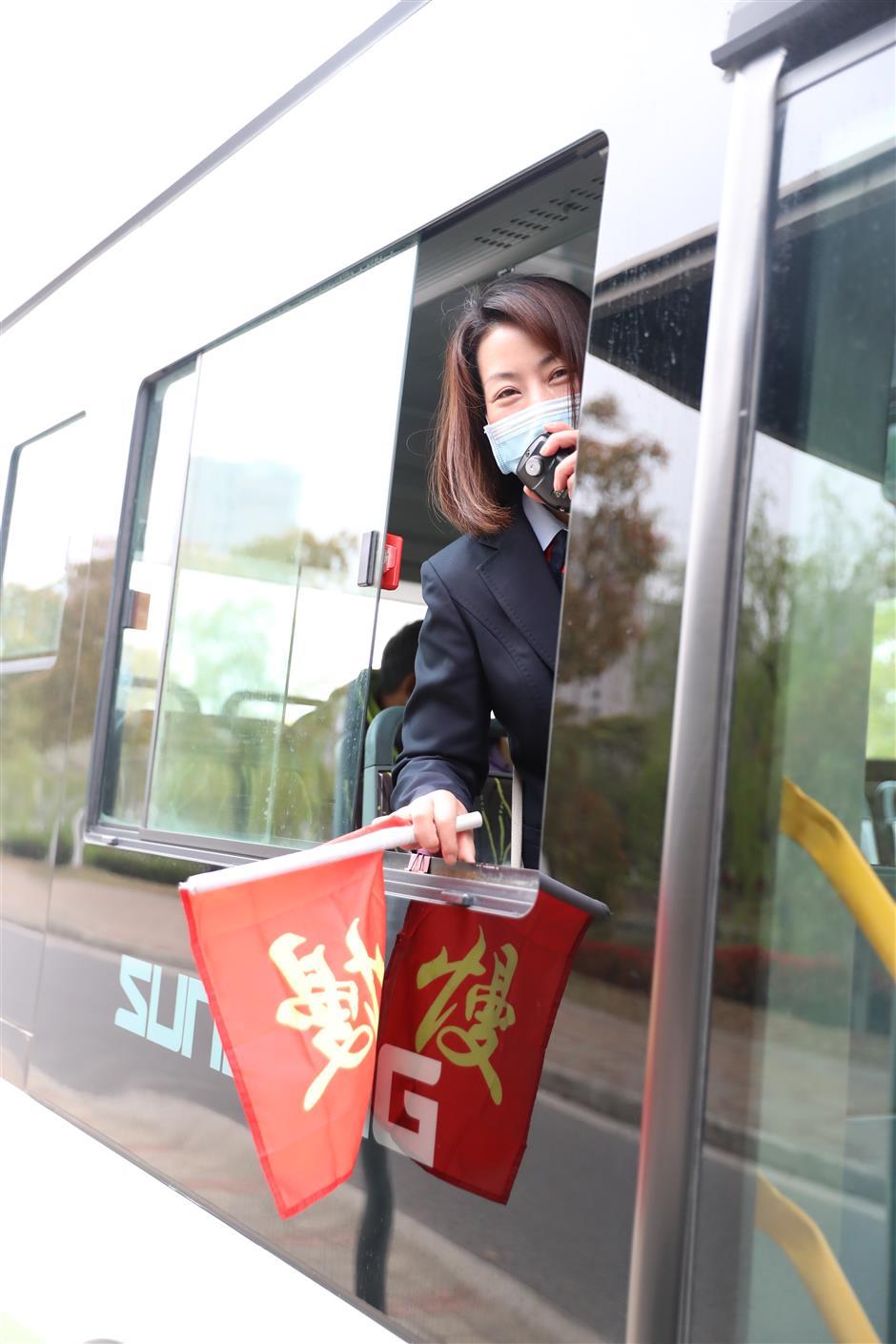 A conductor on duty. Drivers and conductors hope to win the respect and trust of passengers by providing quality service.

Bravery along the way

In addition to painstaking care, there is also courage for a just cause. Last December, a driver for the special line named Xia Xiaokai departed from the Qianwei Village stop heading for the Nanmen terminal.

Suddenly, Xia came upon a sightseeing bus on fire some 50 meters away.

Xia immediately parked his bus in a safe place and told the passengers not to leave. He picked up two fire extinguishers in the carriage and rushed to the scene.

“At that time, it was so urgent," Xia recalled. "As our company organizes fire drills every year, I've learned what to do in case of such emergencies.”

Later, the fire was extinguished.

It was not the first time. Several months earlier, driver Xu Jun and conductor Huang Yaxiang helped put out a fire on a burning truck.

“Welcome to the 10th China Flower Expo on Chongming Island, and welcome to the Nandong Special Line. We will provide you with the best service all the way.”

This excellent team is ready for more passengers. 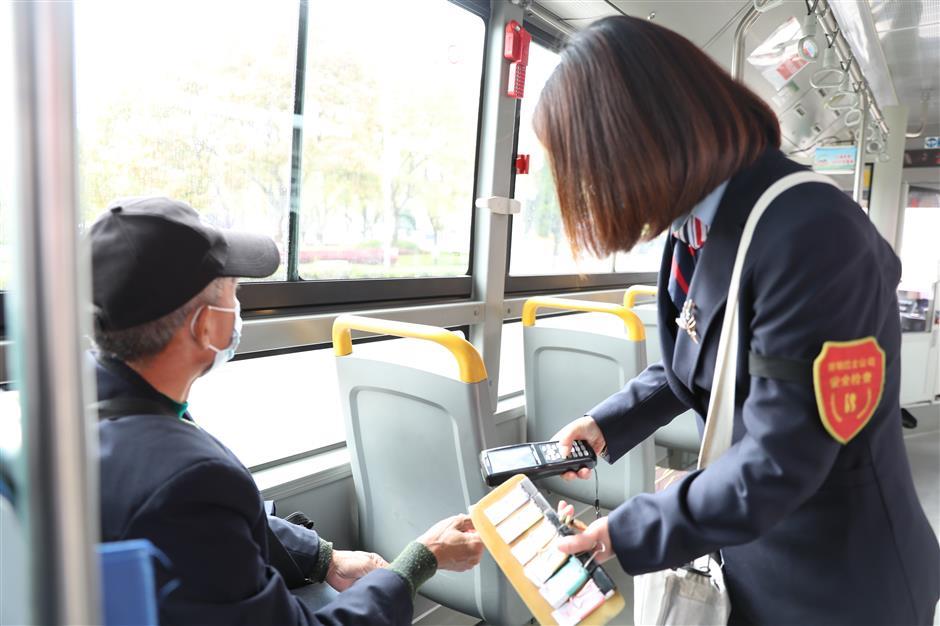 A conductor on the Nandong Special Line serves a passenger.