It was a sunny morning when I sauntered through suburban Shanghai earlier this week in search of an archeological site around which a cultural town will soon take shape.

I was looking for the Songze Site as it had just been named one of China's 100 most important excavation discoveries over the past century.

The discoveries that began in the 1950s eventually proved that Shanghai had a history of at least 6,000 years, in contrast to erstwhile popular belief that it was a quite young city with a history of only a few hundred years. 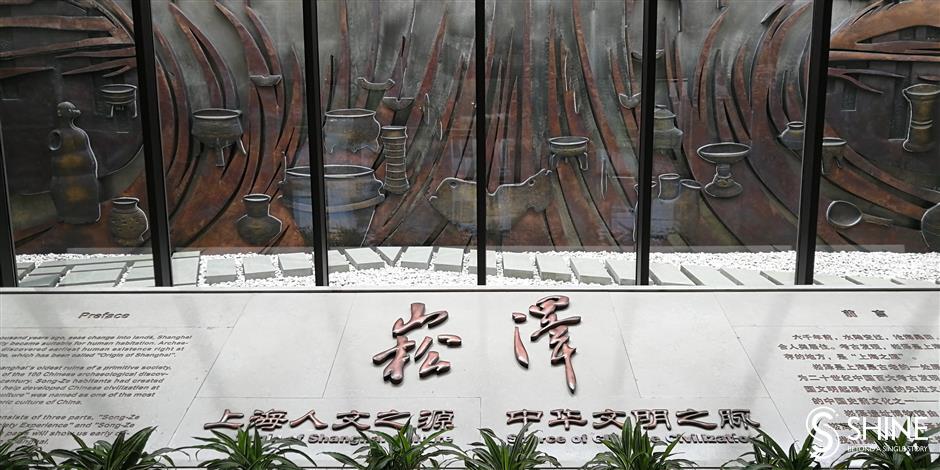 A scene inside the entrance of Shanghai Songze Site Museum.

Shanghai Songze Site Museum, built above a small portion of the 150,000-square-meter backfilled excavation ground, sits on the northern border of Songze Village, surrounded by rivers and a highway.

If you drive westward from downtown Shanghai, you may easily miss the museum, because you need to make a cautious U-turn somewhere from Huqingping Highway and then watch carefully for a signboard. 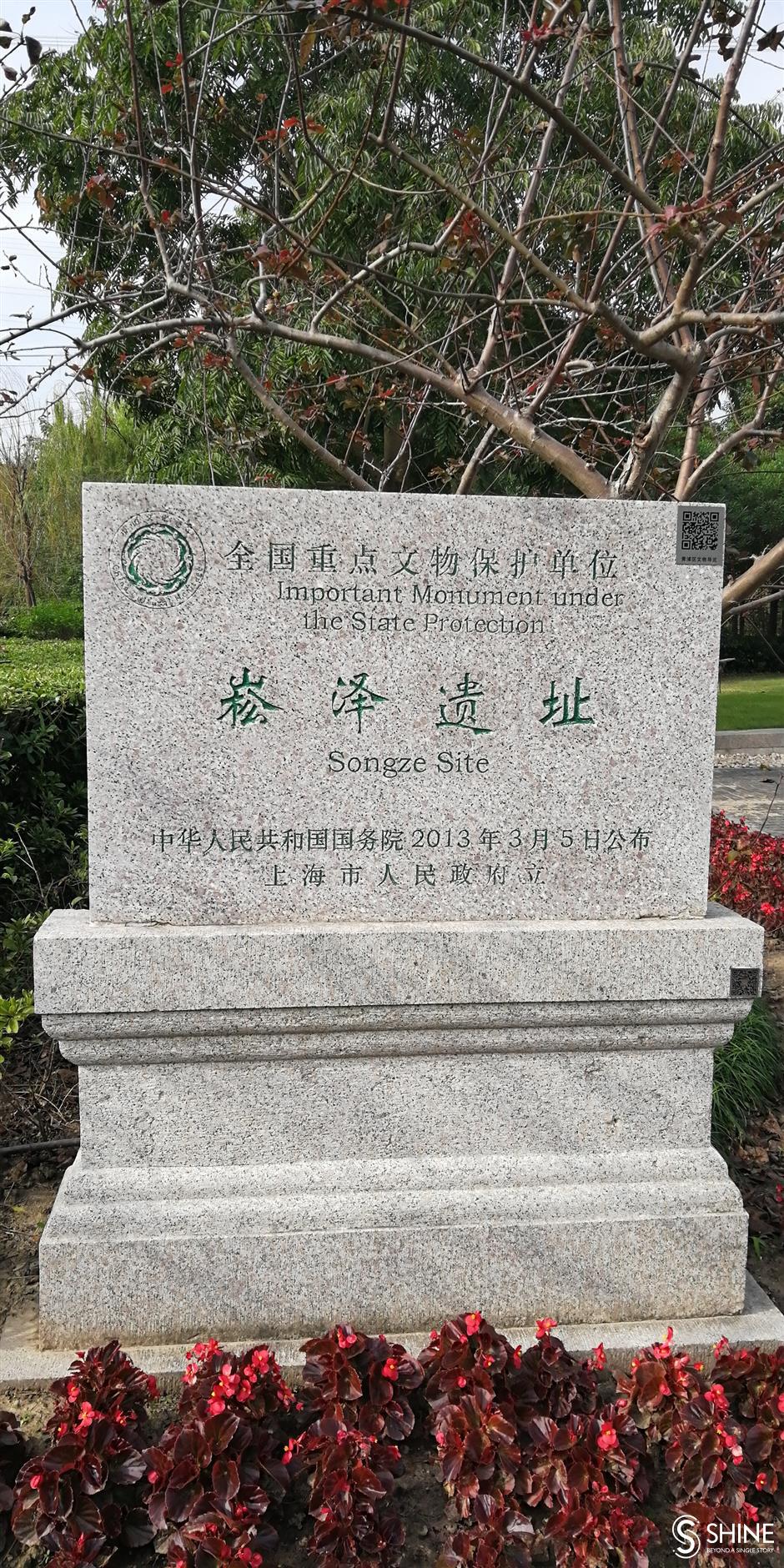 A stele inscribed with Chinese characters for Songze Site stands outside the museum.

Once you make it to the museum, you'll find yourself in a different world from the hustling highway.

At least that's how I felt – an enormous silence enveloped me as soon as I stepped out of my car and stood on the tree-shaded square of Songze Site. I walked a few minutes from the parking lot to the museum, which opened to public in 2014.

For about two hours I immersed myself in the exhibition of excavation achievements.

A couple in their 60s, who spoke Shanghai dialect, were as curious as I about how Shanghai's first settlers came and cultivated a landed life in this region about 6,000 years ago. 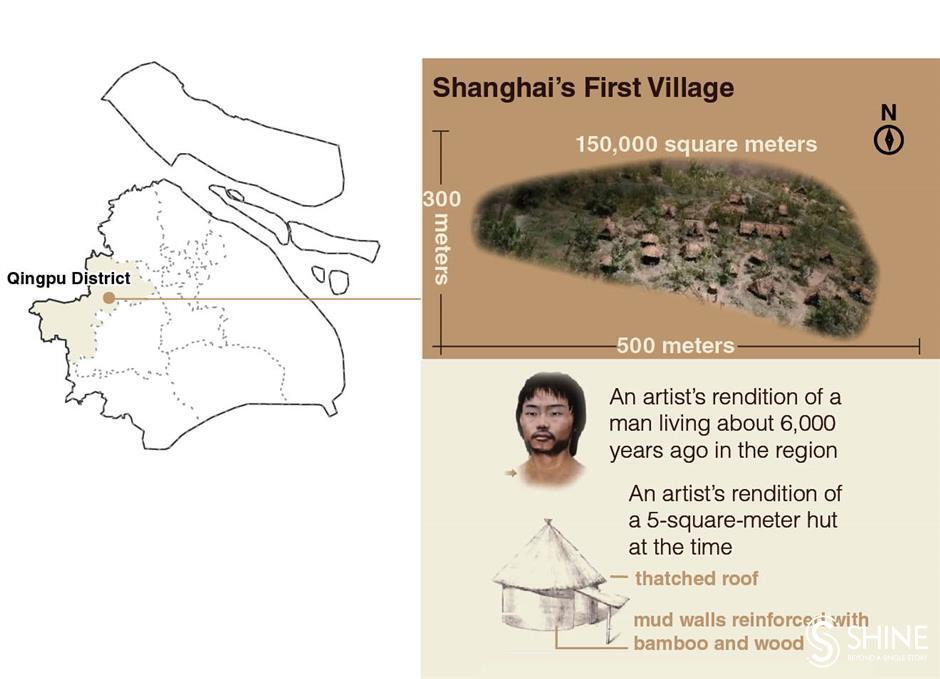 It was the Neolithic Age. Rice was beginning to be grown and pigs were domesticated. Wells were also found to be in use at that time, attesting to our ancestors' early achievements in improving water supply for life and agriculture.

In the exhibition hall, a combination of real and duplicated relics – from a human skull to a thatched house – makes it clear to a visitor that this region boasts Shanghai's first settlers, first rice, first house and first village. It was a village of ordinary farmers. 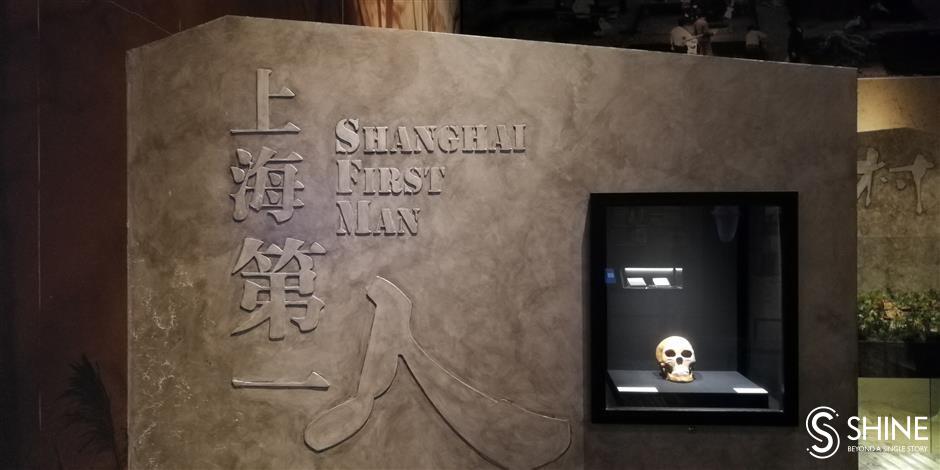 The skull of "Shanghai's first man" A model of "Shanghai's first village" 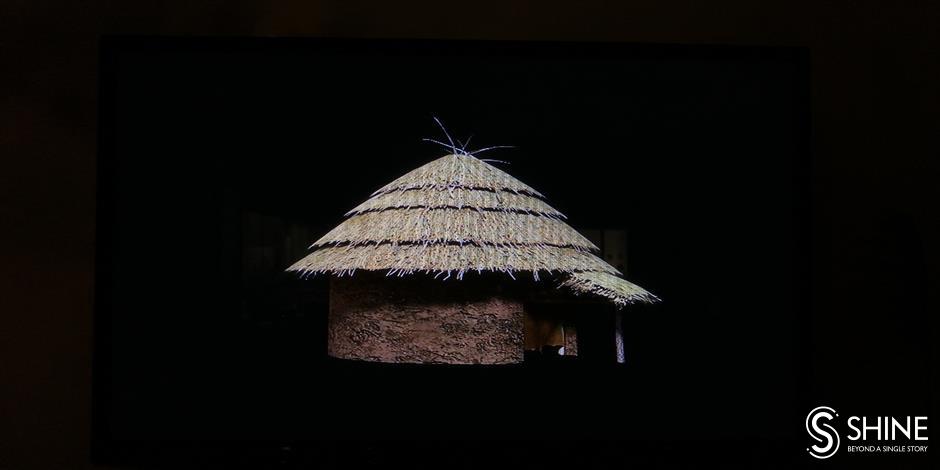 "What an achievement 6,000 years ago!" the old man murmured to his wife, suppressing his surprise at his new finding. So did I, only that I was murmuring to myself in silence.

Before the discovery, it was believed than man had learned to domesticate pigs only about 5,000 years ago. This discovery further proved that China is the first country in the world to grow rice. 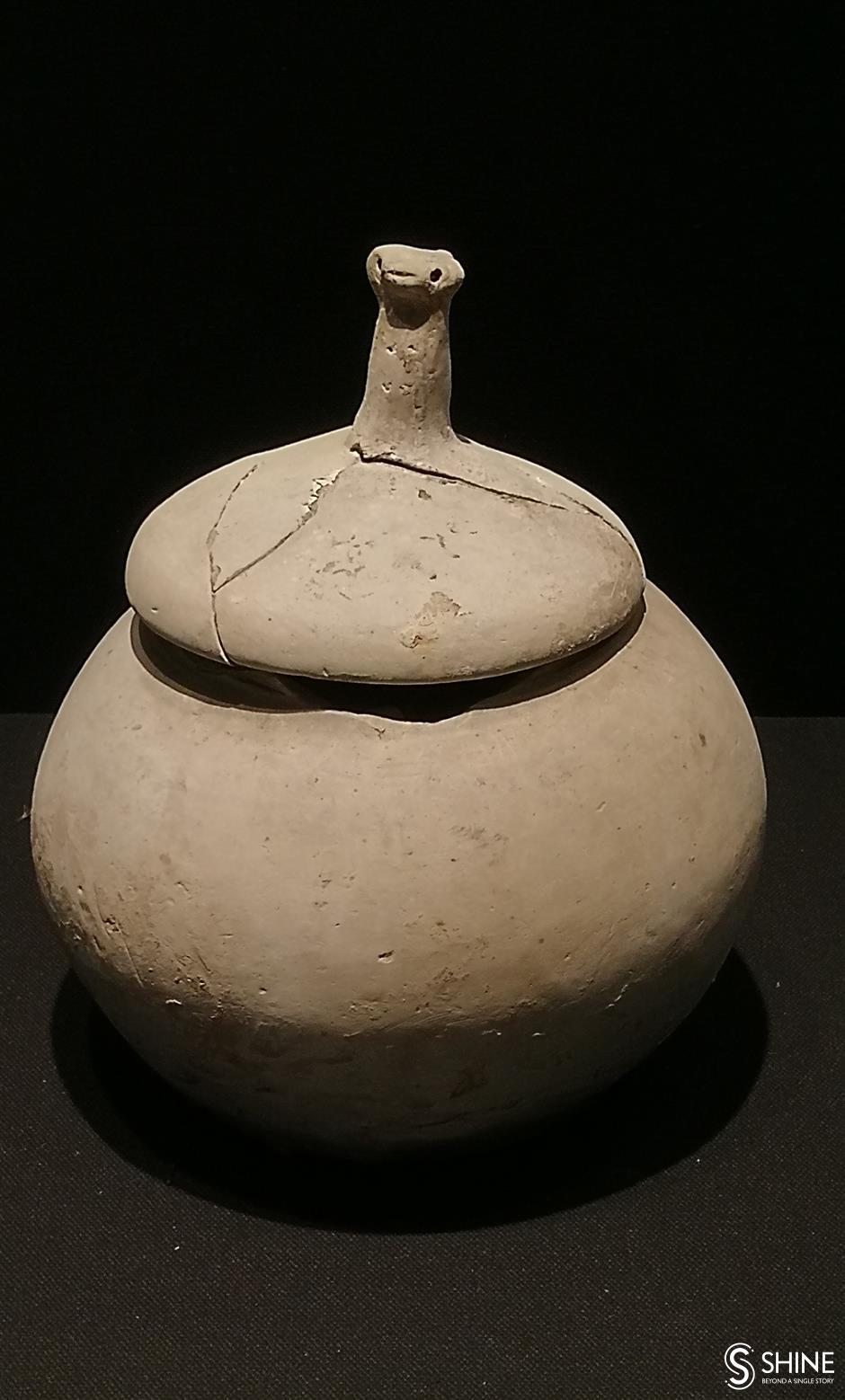 An excavated pottery jar with lid

How I wish more people would know this part of Shanghai history.

To make the museum more accessible to a wider public, the local government announced earlier this month that it would build a 1.2-square-kilometer town – a small one indeed – centered around the museum. As no details are available yet, I decided to go and see for myself.

Having left the museum, I set about looking for the construction site of the small town. I drove across a bridge into a residential area of Songze Village. No sooner had I parked my car outside the gate of a two-level farmers' house than a middle-aged couple came out, the man carrying a big pair of scissors tailor-made for pruning trees. 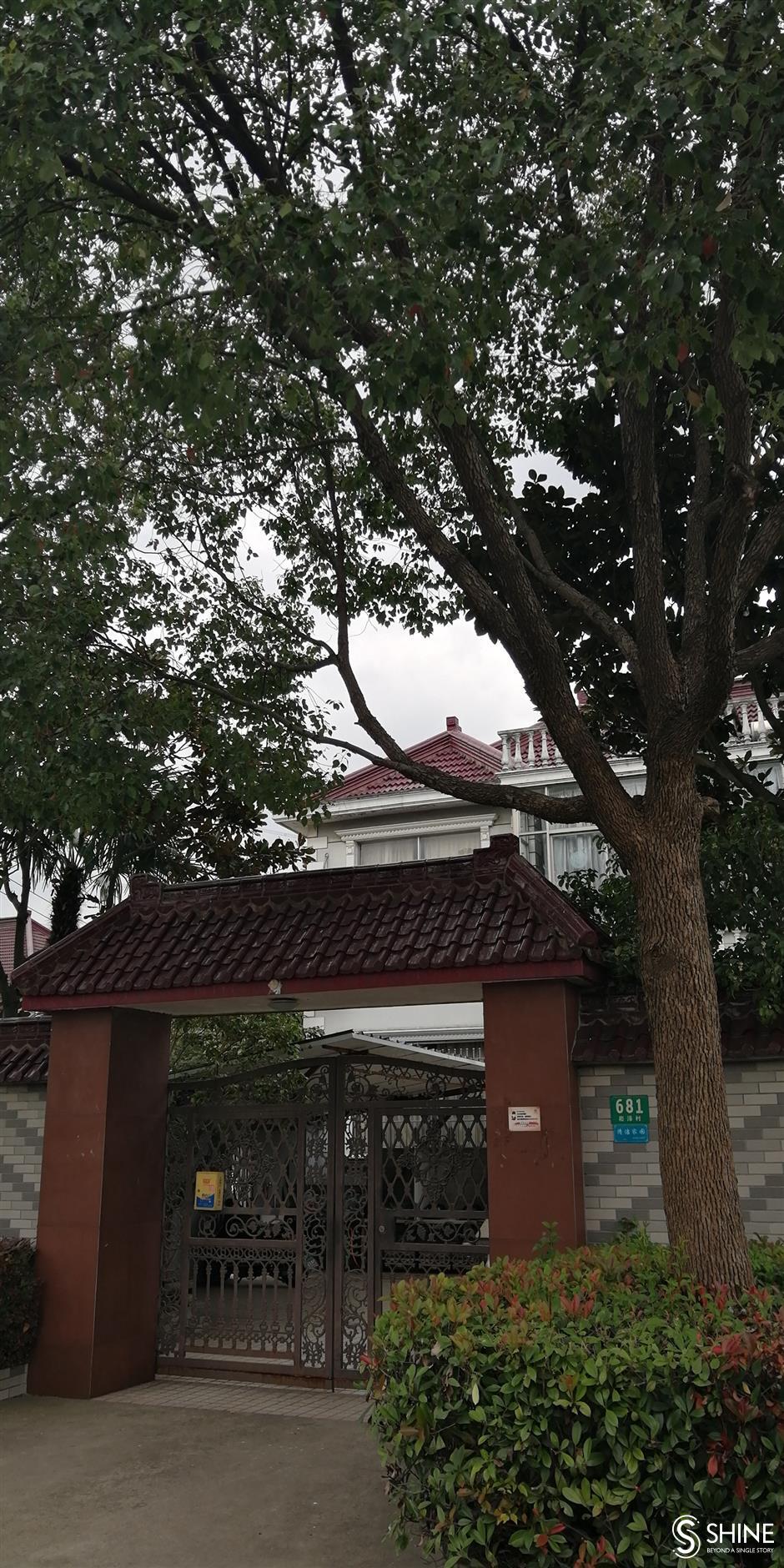 The house of a middle-aged farmer couple in Songze Village is only 500 meters away from the museum.

"You mean the future Songze Xiaozhen (small town)? It will be built right across the street from here," he said, with a beaming smile.

As he pointed toward the nearby region set aside for the future town, I checked my mobile map and found his own house to be only 500 meters to the south of the museum, separated by a river.

"You live in the heart of the future town," I said to him. He beamed with an even broader smile, though a bit shyly.

"I don't know, but we will indeed move into new apartments in about five years," he said. "Some neighbors may move before us."

He was referring to a new farmers' residential community now under construction about 5 kilometers to the east of their village. He and his wife both said they were looking forward to the relocation as the new apartments will be better equipped.

Leaving them temporarily to their gardening work, I walked across the street from their house and came to an area near the entrance of the village.

There I found a new stone gate bearing the inscription of four Chinese characters meaning Songze Culture. It was an eye-catching sign I had never seen before. It was right on the southern border of Huqingping Highway. The stone gate was less than 500 meters to the east of the museum.

Then I walked back to the couple's house, in about 10 minutes. Now that the planned future town centers around the museum, it's clear from my field survey that both the couple's current house and the area across the street will be spruced up to become an archeological town that meshes history with life.

The town project strikes accord with President Xi Jinping's call last year to make historical and cultural relics part of people's lives. Indeed, it's one thing to visit a museum, and it's quite another to "live with history." 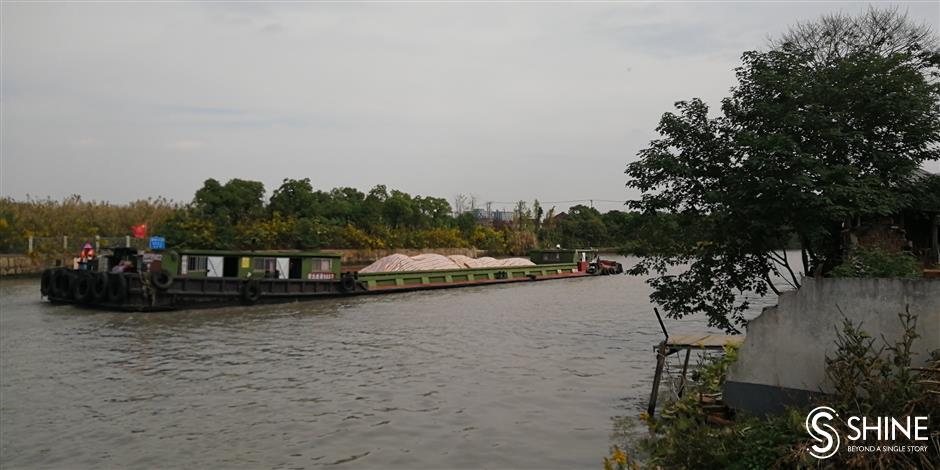 A huge cargo ship on the river that flows through Songze Village, which has kept its agricultural life for thousands of years

Times have changed, and so have human beings' living conditions, but in Songze Village, one thing has never changed over the past 6,000 years – a farming life in harmony with nature.

Worldwide, myriad villages have vanished due to sprawling cities and unscrupulous industrialization. Many Chinese villages were no exception, but in Shanghai, especially in its western suburbs like Qingpu District, farmers' attachment to earth – physically and psychologically – has never faded away. They remain a world onto themselves – a world away from skyscrapers and urban heat island effects. With the future town that extends the rural landscape and ancient culture further toward downtown areas, more urban dwellers will be able to come and feel the charm of a peaceful landed life that has been China's great contribution to world harmony.

"When I was a child, I often saw archeologists digging up relics from under the ground in our village," the middle-aged farmer said. "I love this place. It's like yesterday once more."

In the next few days, I went all the way to the north of the museum and found, to my great surprise, that giant parks are being planned around three other national archeological sites.

Together, the three future archeological parks and the future Songze small town will be like four pearls spreading along a 16-kilometer "necklace" – a country road linking Songze Site Museum in the south and the site of Qinglong ancient town in the north.

Later it lost its status as a key port town due to a shrinking river, but its agricultural tradition has been kept down to the present.

Vast rice and vegetable fields, as well as thick forests, met my eye as I explored the site of the ancient town on Friday. They seem to have been there for ages. 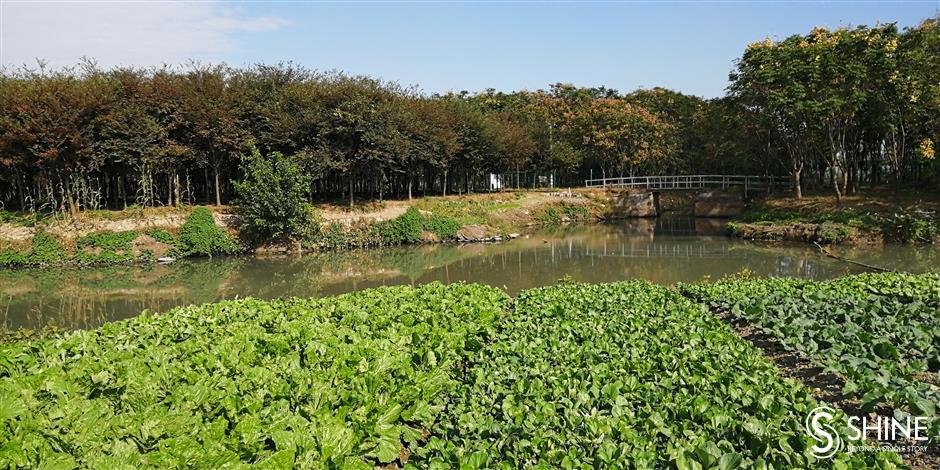 A scene at the site of Qinglong ancient town, where forests and vegetables grow lavishly.

According to the Qingpu government, an 82-hectare archeological park will be built here.

As I rambled around looking for the site of the now vanished Longping Temple built a thousand years ago, I suddenly saw a group of farmers digging in a farm field across a river from where I stood. They were led by someone who looked like a professional archeologist.

I didn't know how to get across the river, as no bridge was in sight and the harvest-ready field prevented me from seeing too far.

But a granny who had just finished her farm work happened to pass by, a smiling dog behind her. She was nice enough to point the way for me – I had to run a long distance quickly to make sure that the farmers digging deep into the ground would not have left before I arrived.

I ran across a faraway bridge and over some tomb areas before I finally found myself close to the farmers. Yes, it was a newly excavated site. It was the first time in my life that I was on the spot of an archeological site. 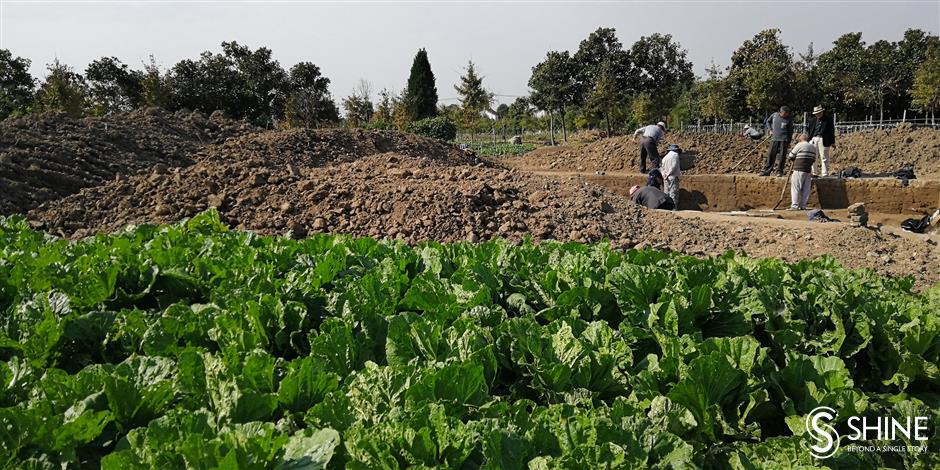 A look at a newly excavated ground from behind a vegetable field.

"The underground bricks do not seem to belong to our time, but it's hard to say how old they are, and it's too early to decide," said an old farmer, whose view was shared by the only professional archeologist at the site.

Later I knew that this new site was very close to that of the Longping Temple. Both sites sit within the future park. 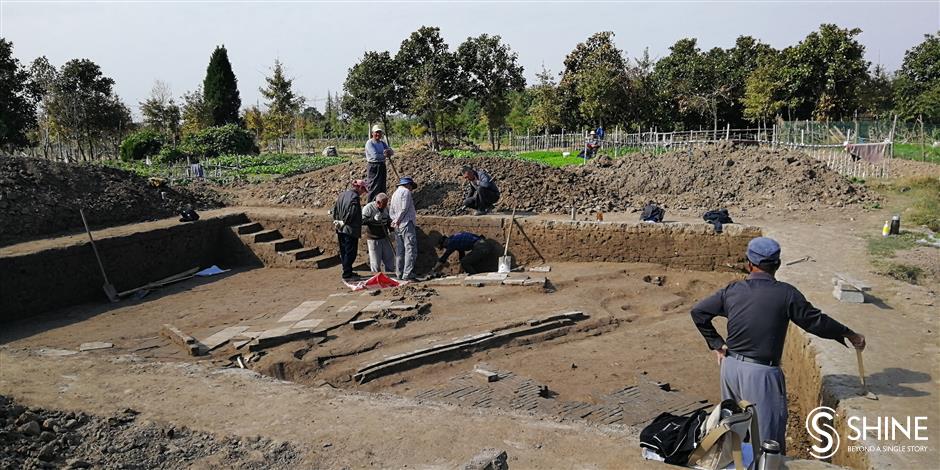 A close look at the new excavation site

About 2 kilometers to the south of these sites is a well-preserved brick tower built in the Tang Dynasty. It was part of a magnificent temple at that time. A new archeological park will be built around the tower, which encompasses vast stretches of farmland.

Further to the south of the tower is Fuquanshan Site, dubbed "a chronicle of Shanghai history" because the relics found there denote human activities from 6,000 years ago all the way down to the Qing Dynasty (1644-1911).

The most important discoveries at Fuquanshan are relics from Liangzhu period, which is slightly later than that of Songze. Among the excavations at Fuquanshan are 32 tombs, most of which belonged to noble families. Significant firing altars were also discovered, showing rituals of spiritual sacrifices.

A staff member at the Fuquanshan Site scenic spot told me that a much larger park will be built on the spot and that preliminary work is underway.

The existing scenic spot has no river or rice field in it, but the future park, to be completed by 2035, will encompass three rivers and vast rice fields, so that visitors can feel the 6,000-year-old earth under their feet and experience a life on the farmland once lived by their ancestors.

The restoration of such a landed life goes a long way toward safeguarding biodiversity and reducing carbon emissions in today's world.

When giant parks are completed around these archeological sites, along with a revival of the ancient villages that host the sites, Shanghai will be a city not only with a long history, but living in that history. 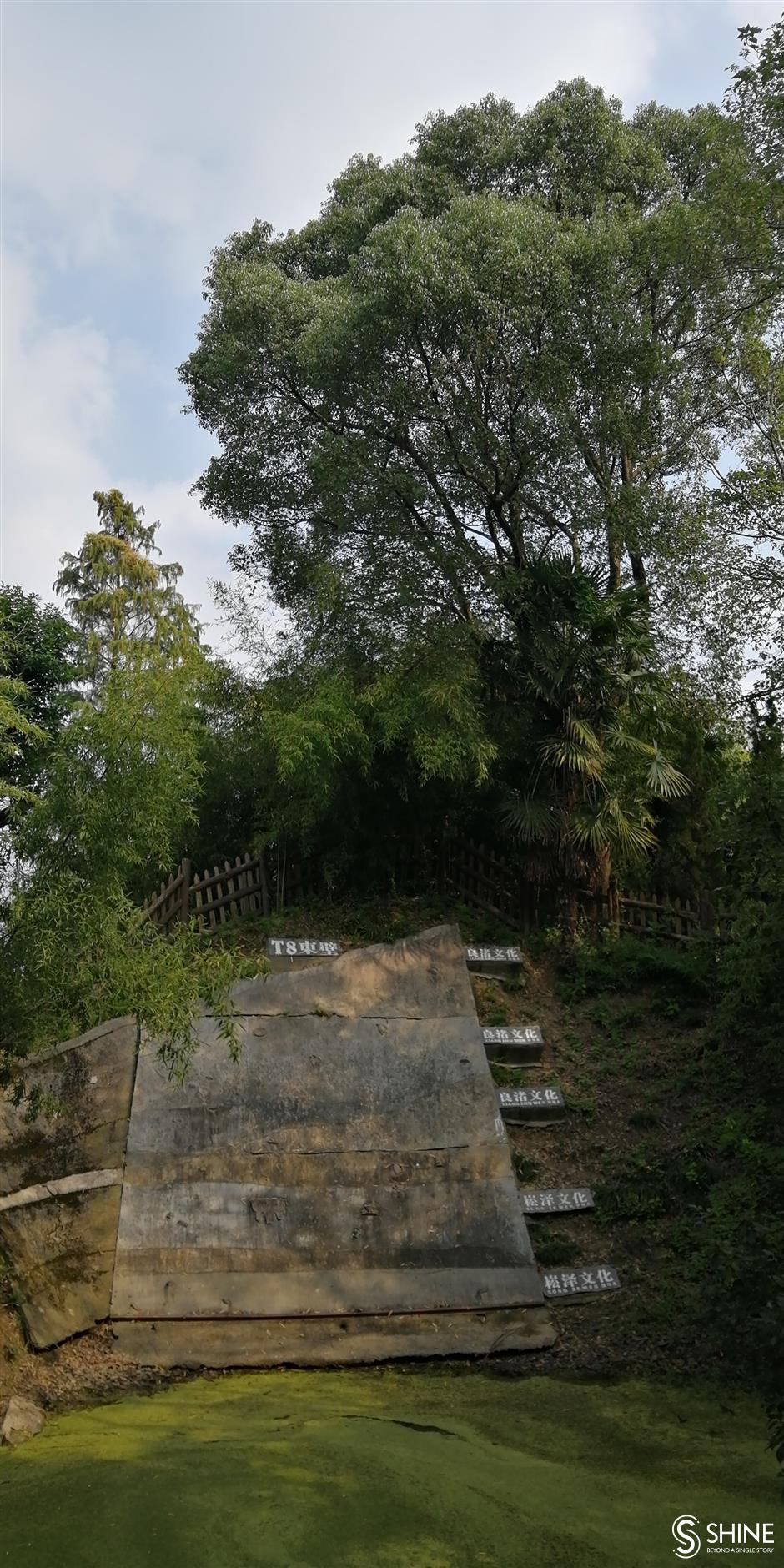 At Fuquanshan Site, excavations from different layers of earth point to the different ages. 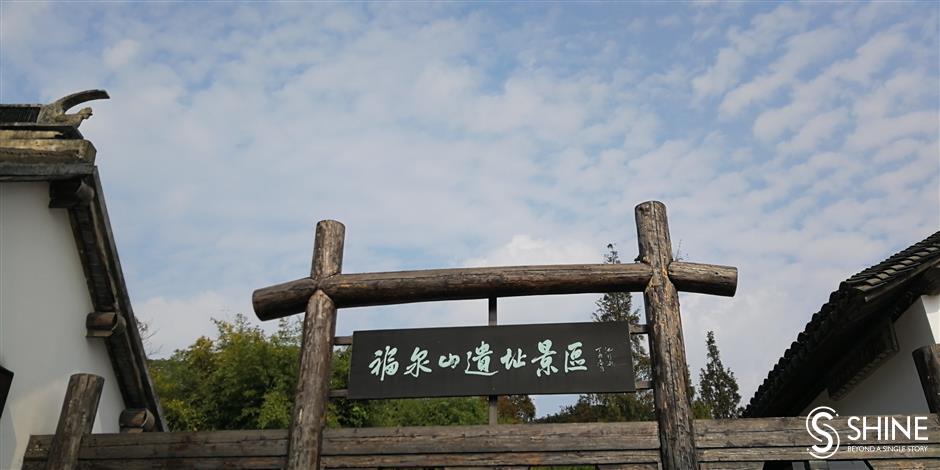 The main gate of Fuquanshan Site Park, which will be significantly enlarged by 2035 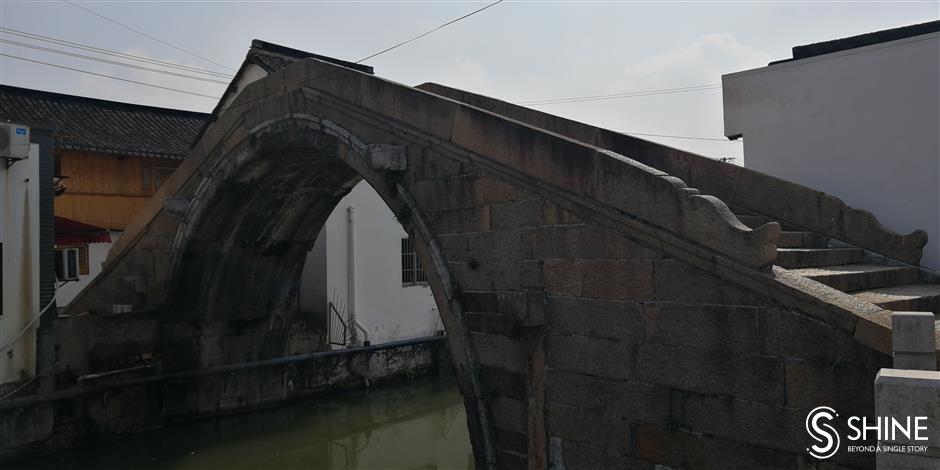 A stone bridge first built in the Ming Dynasty (1368-1644) will be a close companion to an enlarged Fuquanshan Site Park.

The blueprint of the enlarged Fuquanshan Site Park to be completed by 2035. It will be meshed with nearby rice fields, helping visitors walk from history into the present. 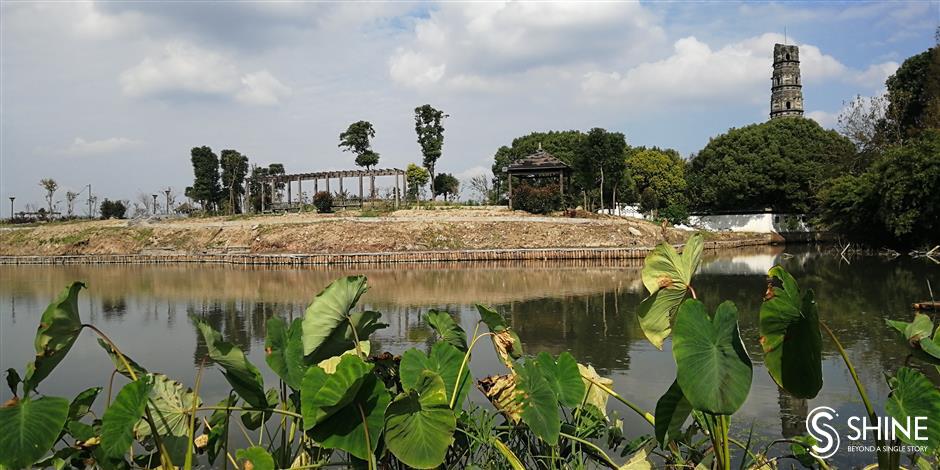 A view of Qinglong Tower built in the Tang Dynasty