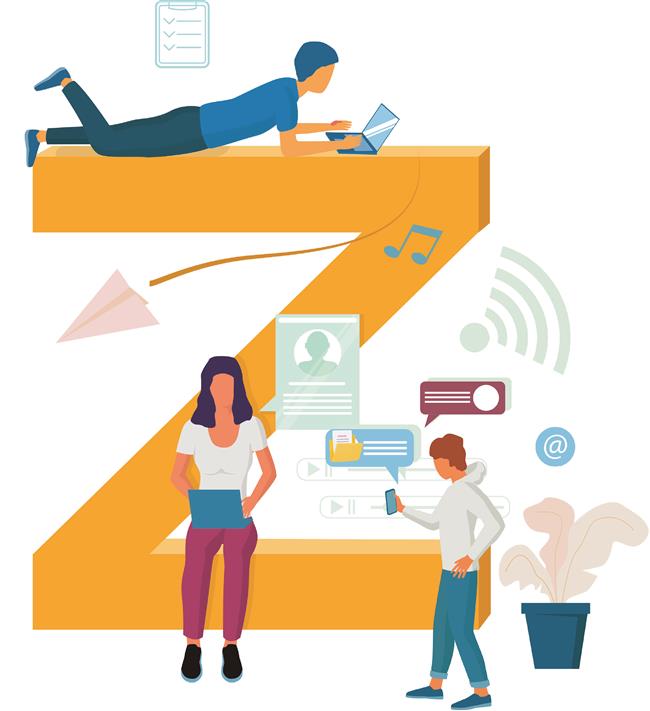 Cindy Cao was taken aback when a new intern at the logistics company where she worked barged into her office one day to complain that she was being asked to work some overnight, in violation of her recruitment agreement.

Cao, born in 1992, is human resources director at the Shanghai-based company, which employs about 150. The intern, born in 2000, had just graduated and was taken on an intern for two months – six weeks of it working from home.

The brashness of the intern underscores a stark difference between generations.

"Media and society used to refer to us born after 1990 as a generation that values work-life balance, stands up to authority and does a lot of job-hopping," Cao told Shanghai Daily.

"When I was a work rookie, I thought myself brave and different from previous generations, but it was nothing like the current generation," she said. "The new millennials are transforming the workplace."

The trend she cites is flaunted in discussions all over the Internet. Recent college graduates entering the workforce are bringing a new force with them.

Top-clicked comments include those who support the new trend and those who are a bit more circumspect.

One top-clicked comment with hundreds of "likes" goes like this: "Post-80s don't dare to say no to overtime; post-90s pretend to work hard; only we post-00s are transforming the workplace. I have worked for a year and sued four companies – two of them went bankrupt. Bully for me!"

Perhaps the bold new trend is rooted in what is a long overdue overhaul of the employer-employee relationship. Companies are being accused of making empty promises to staff, related to issues such as overtime and compensation packages.

At the frontline of such allegations are human resources staffs, who are supposed to be the liaison between employer and employees.

In that role, Cao has mixed feelings about it all.

"It's true that interviewees born after 2000, or indeed after 1995, ask more about rules on annual vacation, overtime and leaves of absence, which is understandable," she said. "But I believe most of them will cope with it over the time, just as the post-80s and post-90s generations have done, unless they just want to be boss."

Post-80s don't dare to say no to overtime; post-90s pretend to work hard; only we post-00s are transforming the workplace. I have worked for a year and sued four companies ­– two of them went bankrupt. Bully for me!

One Guangdong-based company has set up an entirely new department, called "the new generation department," to deal with millennial workers, according to online media Shangyou News.

Screenshots of the company showed the message: "The new department consists of only post-00s colleagues, bar its director. All post-00s applying for jobs or working at our company will be managed by this department only."

Also, screenshots of a chat with an employee of the company revealed specific rules and disciplinary measures regulating everything from showing up late for work, not finishing assignments on time and challenging or disobeying work arrangements.

That evoked a torrent of responses. One asked, "Are you training new era slaves?" It garnered 17,000 "likes."

One of those "likes" came from Marlow Zhang, a sophomore at Shanghai University.

"But I think that's an extreme case," he said. "I don't want companies to label us as post-00s employees who need special attention. That may make it even more difficult for us to get internships or jobs in the already tight post-pandemic labor market."

Zhang's concern is echoed in a survey of university graduates by Zhaopin.com, released in April. It sampled 18,000 2022 graduates.

The survey showed 61 percent of them believe the job market to be extremely competitive, while 42.5 percent puts state-owned enterprises as their first choice of workplace. The percentage of those opting for jobs in civil service doubled from previous surveys.

Zhang had a summer internship last year and said he argued with his supervisor a few times. One disagreement related to whether he should get take-out and eat alone or join colleagues for lunch.

"My supervisor actually listened and discussed it with me, so it was not confrontational," Zhang recalled. "I understood his point about developing good relationships with colleagues, but I also wanted him to respect my desire to enjoy a lunch break alone."

He did join colleagues twice for lunch, to " save face for my supervisor," but he said he didn't enjoy the outings.

"I'm not interested in their conversations at all," he explained. Research from the Shanghai Academy of Social Sciences sheds some light on the current trend.

The academy's Institute of Sociology began a survey of the post-00s generation in March 2020, led by researcher Yang Xiong. Yang has written about some of the findings in large Chinese cities and his observations about the new generation.

"The post-00s generation was born in the third decade after China's reform and opening-up policy started in 1978, which began a golden era of rapid Chinese growth and change," Yang wrote.

"They have benefited from the achievements of China's economic reform and growth since birth, enjoying a richer material life," he said. "They were in school during the rapid popularization of the Internet, so they are more open-minded and more tolerant of diversity. "

He wrote, "Instead of traditional awe of authority, their idols tend to be e-celebrities. They are both passionate about striving for success and laid-back in their attitudes. They are also more aware of equality and rules. They are more tolerant about behavior in the 'private realm,' while expressing clear love or hate toward morals in the 'public realm."

It's all a bit of a hodge-podge of ideals and beliefs, mixing traditional culture, foreign culture and national patriotism – a fusing of different value systems including materialism and post-materialism.

Post-materialism stresses the individual and self-expression, values embraced by generations of people who grew up in one-child families.

"I think the difference is we are financially freer," Zhang explained. "Half of my classmates are ready to do a master or study abroad if the job market continues to be challenging when we graduate. My dad said he would support me in finding a job I really like. He said he would pay me a 'monthly salary' while I hunt for a job so that I don't have to settle for something I don't want."

That offer provides a welcome safety net amid trending news that a record number of 10.8 million graduates are competing for jobs this year.

"I need to be prepared for when I graduate," Zhang said.