Rural guesthouses tap heritage and get the ball rolling 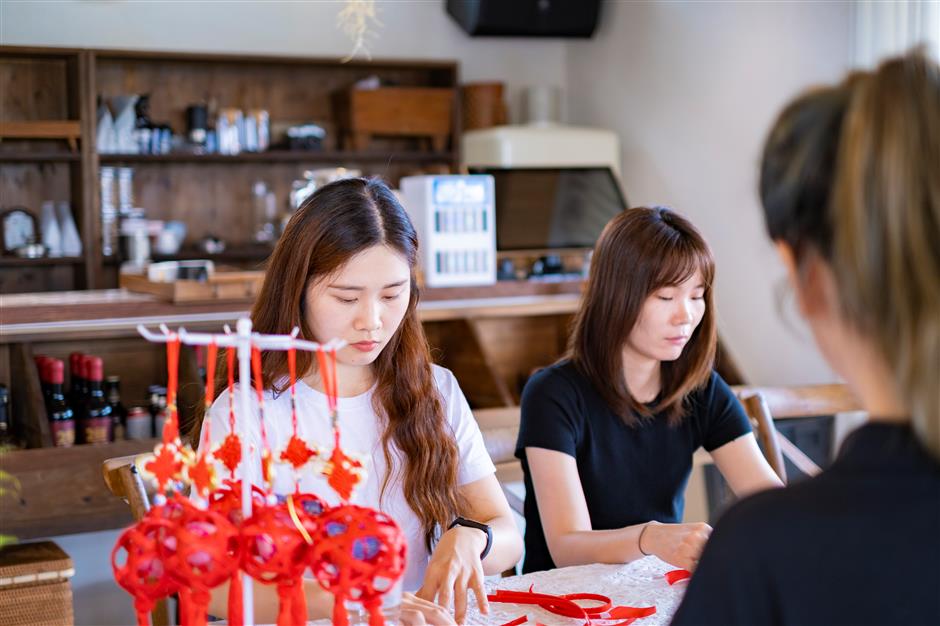 Guests at a rural retreat join locals in making small versions of rolling lamps, which will be sold as souvenirs.

Small guesthouses owned by farmers in an outlying Shanghai district offer guests something they will find nowhere else – a 700-year-old folk custom known as the rolling lamp dance.

The fusion of dance and martial arts dates back to the Ming Dynasty (1368-1644), when locals staged performances to welcome armies fighting Japanese pirates rife along the coast.

In the town of Zhelin in Fengxian District, the birthplace of the rolling lamp dance, guesthouse operators are tapping their heritage to entertain visitors seeking a respite in the countryside.

The activity involves a giant ball with an outer frame comprised of 12 bamboo strips and a smaller ball inside, usually wrapped in red or black cloth. The sizes range from 32 to 120 centimeters.

When the lamp rolls, the ball inside flies like a bird. 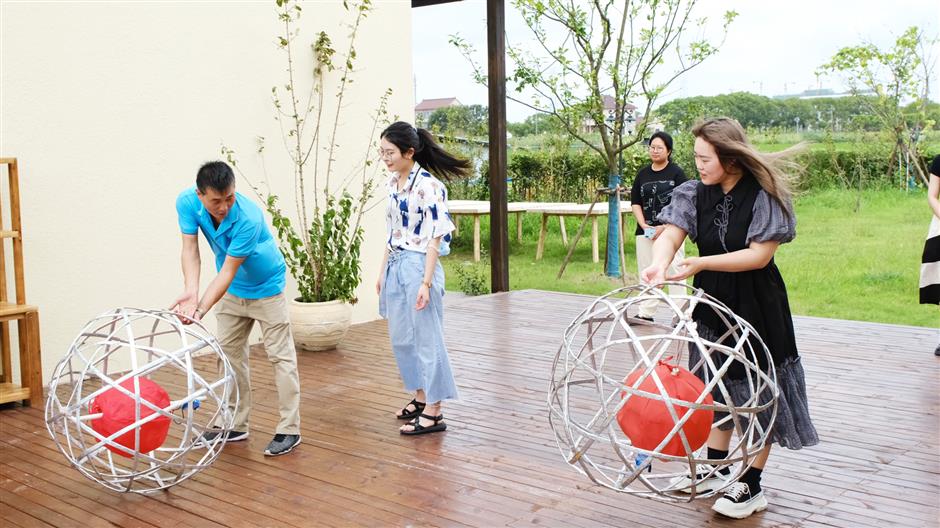 Visitors to the town of Zhelin are encouraged to join in the rolling-lamp dances.

Every morning, the popular Miss Yu guesthouse in Zhelin invites guests to a demonstration of the traditional lamp dance on adjacent farmland. Wang Zhengrong, 70, a fifth-generation "inheritor" of the folk art, teaches the movements to those who want to join the fun.

"Many guests – including Shanghai residents – are really interested in learning a heritage skill, especially one they aren't familiar with," said Wang.

One afternoon, guest Yu Yan and several ad agency colleagues on a team-building retreat in the town joined local women in making smaller versions of the rolling lamps to sell as souvenirs.

"This kind of rural getaway is more meaningful than just camping out in farmland or picking local fruit," said Yu. "I'm very interested in history and tradition." 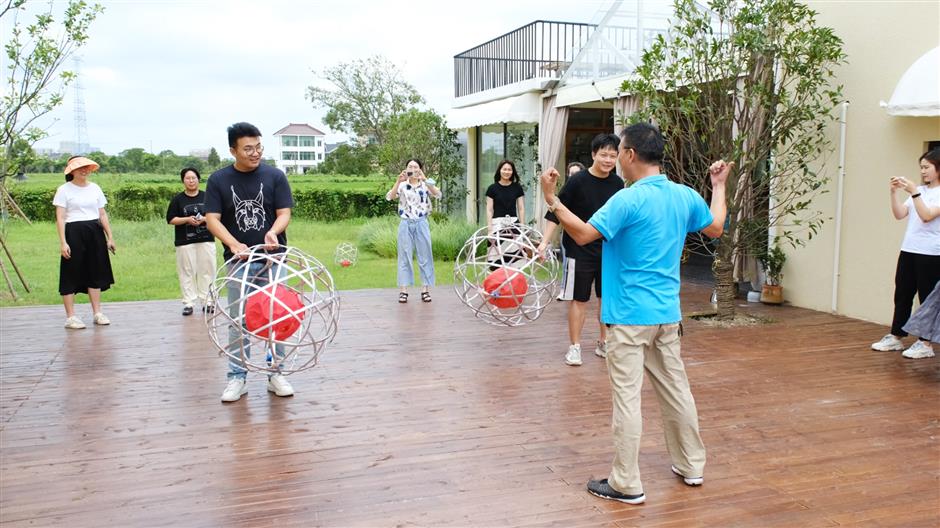 Many visitors are unaware of Zhelin's long history or special cultural heritage.

The rolling lamps are included on China's national "intangible cultural heritage" list, which now spans 1,986 activities that include literature, music, dance, sports, handicrafts and traditional medicine. Some were rescued from the brink of oblivion.

Shanghai is home to 55 national-level heritage skills. The rolling lamp was added to the list in 2008.

Heritage of such stature is important to Zhelin, where local farmers are being relocated from dilapidated old houses into newly built communities. Rural tourism is one way villagers can increase their incomes.

A house owner can receive about 50,000 yuan (US$7,094) a year by opening a guesthouse, and the lamp-rolling attraction has a trickle-down effect on the local economy. 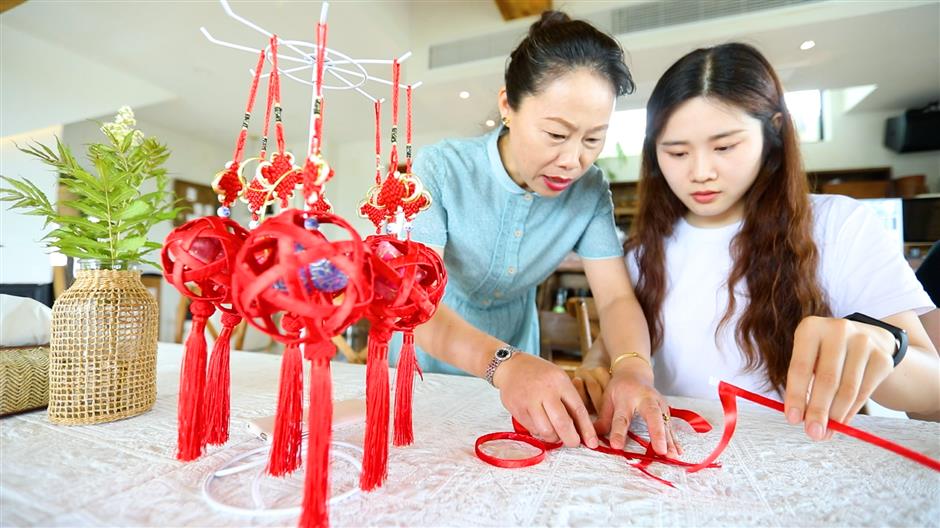 A guesthouse owner shows a guest how to make small versions of the lamps.

Cai Zhongxian, a senior craftsman who makes rolling lamps, is kept very busy by new orders. He earned much less when he was just an ordinary carpenter. Now he is called "Master Cai" and is finding folk heritage profitable.

He has strict standards for selecting the bamboo used to make the lamps. It must be 6 to 8 years old and cut in the winter when driest.

Cai works from 6am to 9pm every day. He can make two medium-size rolling lamps a day. Each sells for 80 yuan.

"I am not only earning more money for my family, but I am also helping to promote a traditional skill of my hometown," said Cai. 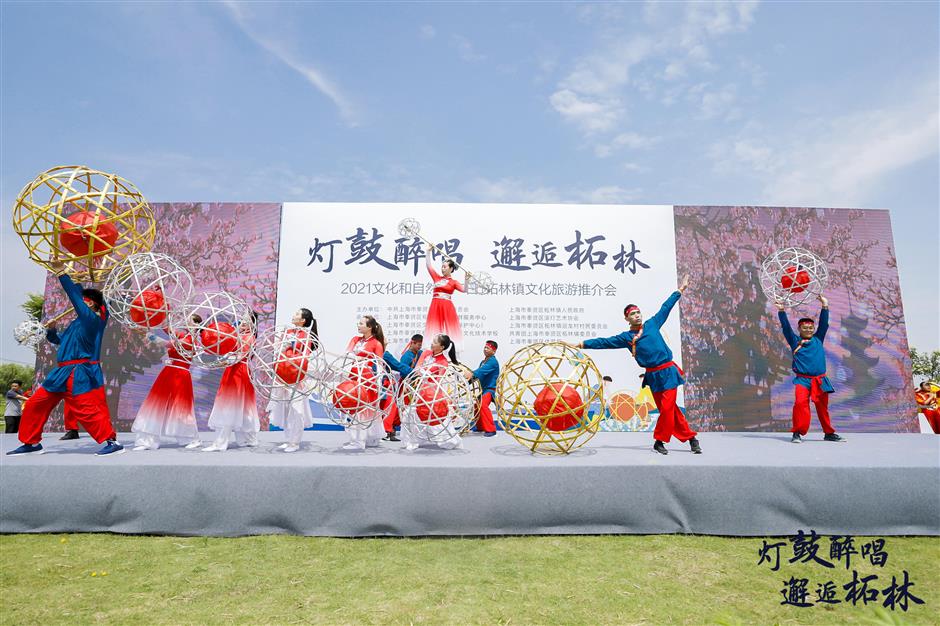 A troupe of rolling lamp performers goes on stage at a tourism promotion event.

A local school recently ordered 500 smaller rolling lamps for students to use in practice. Cai hired several apprentices to fill the order. It is a way, he said, of cultivating the next generation of craftsmen.

Demand for the lamps grows as numbers of rolling-lamp performance teams increase. There are now some 100 such groups, with members ranging from students to retirees. A professional team of 40 members performs at festivals and events, both at home and abroad.

"It's little known that this town has a village dating back more than 5,000 years ago, along with the Shanghai's oldest salt pan, temple, bridge and sea dike," said Xiang. 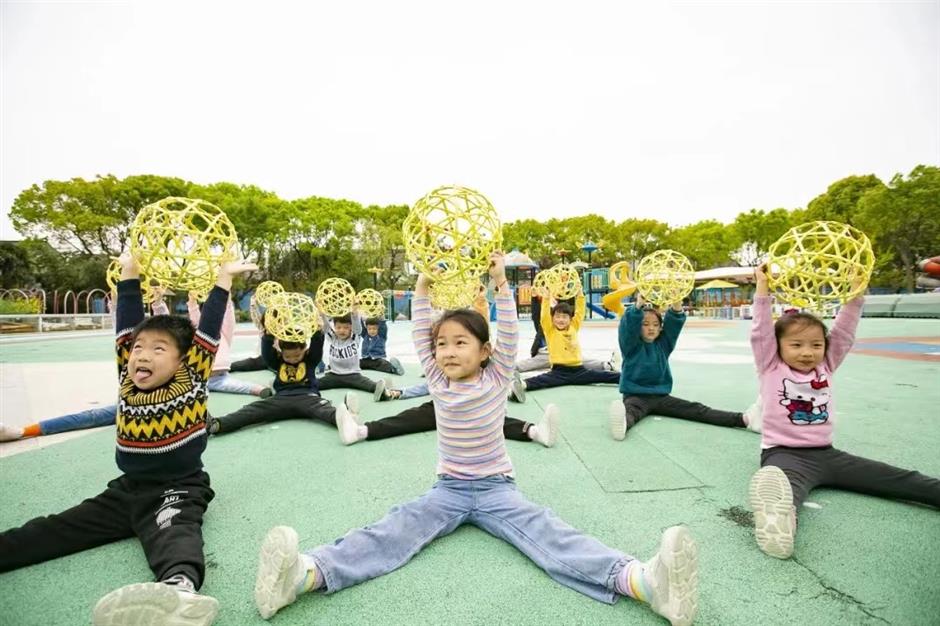 Kindergarten children in Zhelin practice with rolling lamps at school.

Indeed, the 8.6-kilometer-long remains of the Huating Ancient Stone Dike has been dubbed the "Great Wall on the Sea." Built in 1735 to stave off floods and pirates, it originally stretched 33 kilometers.

It's said the rolling lamp played a role in that construction. Workers filled large baskets made from bamboo strips with earth or stones as a defense against flood tides. The baskets became the prototypes of this folk heritage when they were later refashioned as large, hollow balls.

The remains of the ancient stone dike known as the "Great Wall on the Sea."