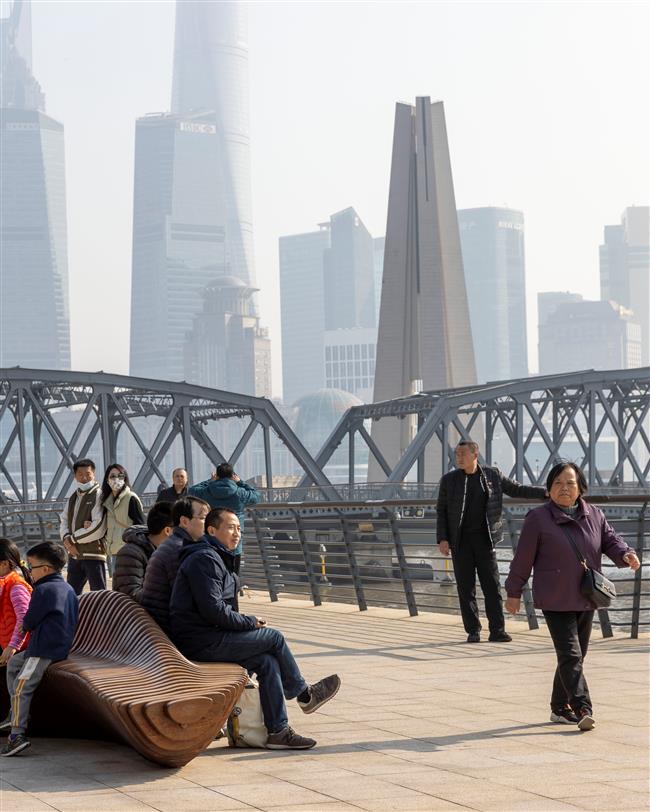 Visitors take a rest on public seating near Shanghai's iconic Waibaidu Bridge at the Bund.

Shanghai residents are sitting pretty after the city launched a three-year project to install more public seating along streets and popular gathering sites. The plan has been creative in its execution.

"Urban renewal now focuses on what people need rather than on just creating big landmarks, such as sculptures, plazas and skyscrapers," said Fan Wenbin, a professor with Shanghai Jiao Tong University. 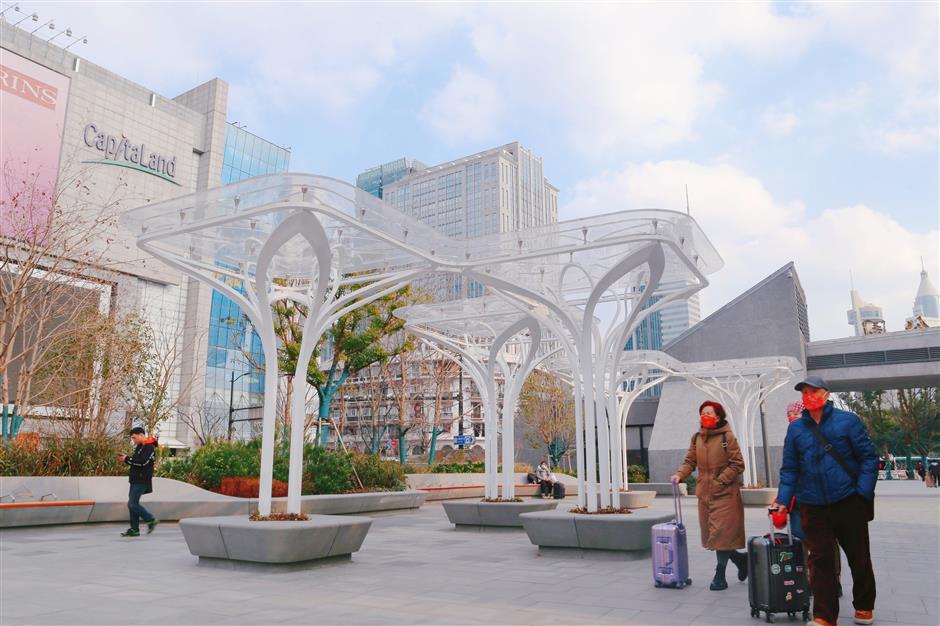 Residents are sometimes pleasantly surprised by the effects of the new seating.

Lu Pengcheng, a resident of more than a century-old villa on Yuyuan Road, and his neighbors recently opened their private courtyard to pedestrians under an agreement with the downtown Jing'ansi Subdistrict.

The yard, jointly owned by seven households, used to be a bit of a dumping ground, but the subdistrict promised to clean it up and take over maintenance if residents provided seating for pedestrians.

"We didn't like the idea at first," said Lu, 35, an information technology engineer. "We had safety concerns. But we changed our mind after seeing the subdistrict's beautiful blueprint. It has turned out to be a nice experience talking with curious pedestrians who stop here."

Lu's neighbor, a retiree surnamed Fan, lives alone. She said she used to feel isolated by the courtyard wall, but now that the area is open to pedestrians, it has "become alive and interesting." 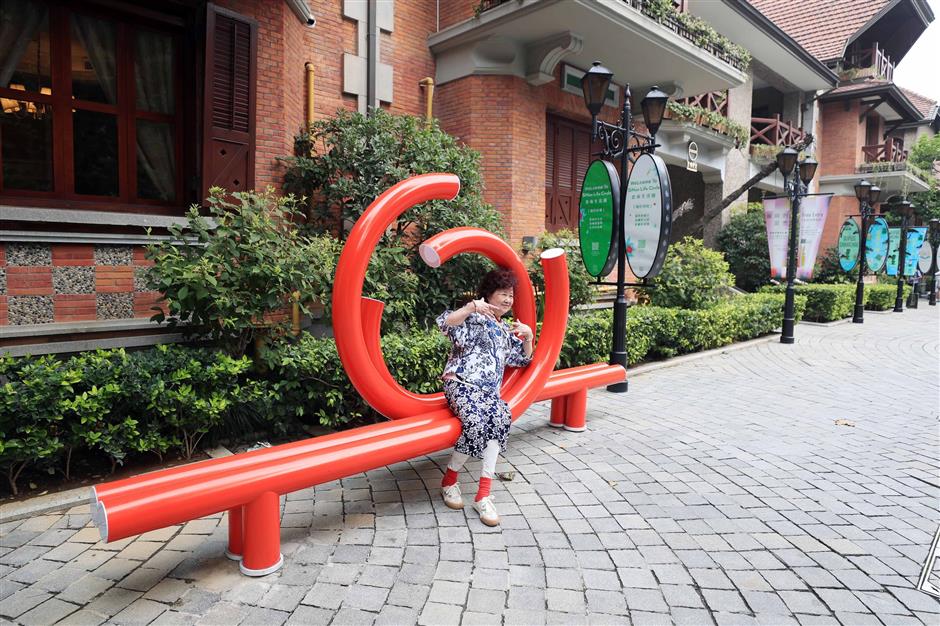 An artistic seat at Sinan Mansion entitled "Shanghai Heartbeat" is popular with photograph-takers.

Shanghai now has more than 14,000 public seats – some new, some renovated old seats and some donated by individuals or companies, the Greenery and Public Sanitation Bureau said.

Creative designs are deployed in new seating, especially along the banks of the Huangpu River and Suzhou Creek – sites popular with locals and tourists.

Along the Hongkou section of Suzhou Creek, wooden benches evoke the waves of Shanghai's "mother river." Some iron seats feature the patterns of butterflies or even envelopes to highlight the nearby Shanghai Postal Museum.

Similar seats have been installed along the creek in Changning, where visitors can sit on S-shape steel "waves" right beside the water.

Along the Huangpu River waterfront in Yangpu District, known as the cradle of Shanghai's modern industry, seats are made with rusted metals to recall the former glory of power, textile, soap and other factories. 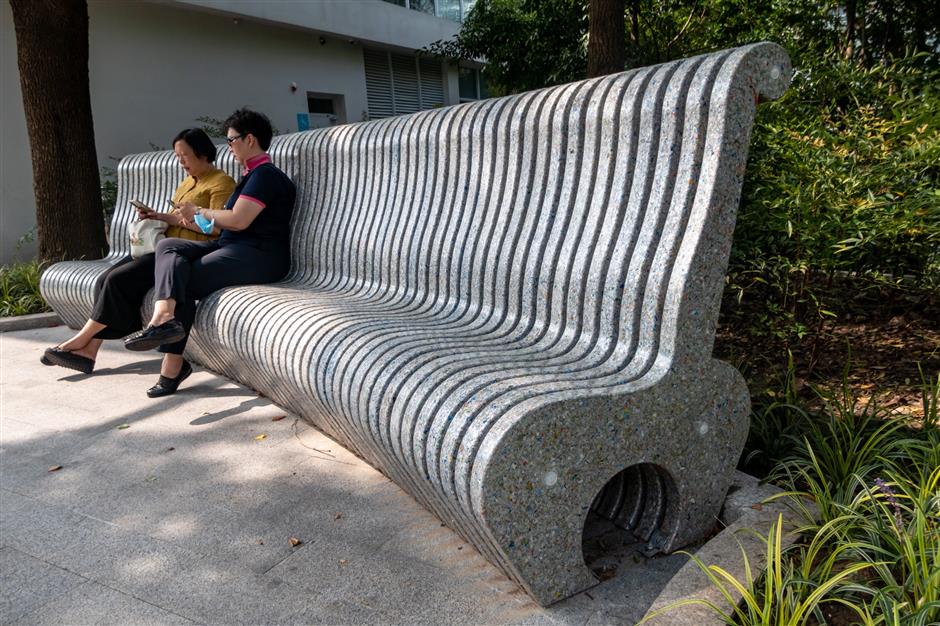 A bench made of 160,000 recycled milk cartons on the North Bund.

The North Bund waterfront has four colorful seats made of 160,000 recycled milk cartons to promote the city's trash-sorting policy.

"The riverside region has become my sitting room," said Wu Wen, a 74-year-old retiree who practices tai chi near a row of benches on the North Bund every morning.

To a grandmother surnamed Wang, chatting with neighbors on a public bench near her home on Yuyuan Road is a daily pleasure.

"My home is small and lacks sunshine," she said. "I need fresh air, and I enjoy keeping in touch with old friends."

Some circular seats on the North Plaza of Shanghai Railway Station have become social gathering sites for travelers from the same provinces. There, they share information from back home and help newcomers to the city. 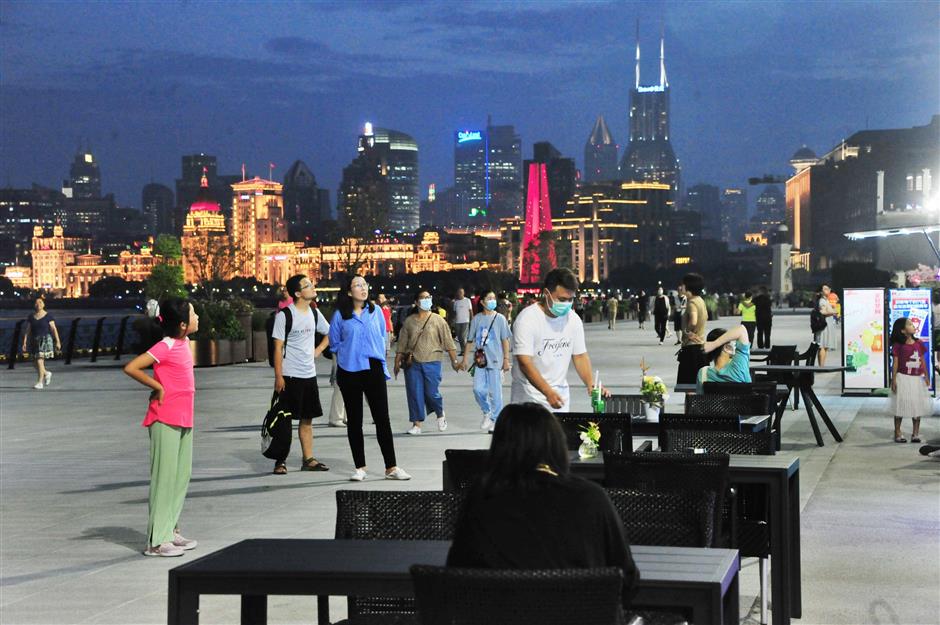 Public seats and tables on the Huangpu River bank are popular with the area's throngs of visitors.

However, it can be difficult sometimes to balance artistic design with comfort. Some of the city's fancy new seats are a bit hard on the backside, Shanghai Daily found.

The metal benches on the Yangpu waterfront, for instance, are too cold in winter and too hot in summer, and the rusted surface is a concern to parents.

Other seats attract few users because they have no backrests. Some made with wooden or plastic materials are easily damaged, and most seats have no shield from rain and are often wet. 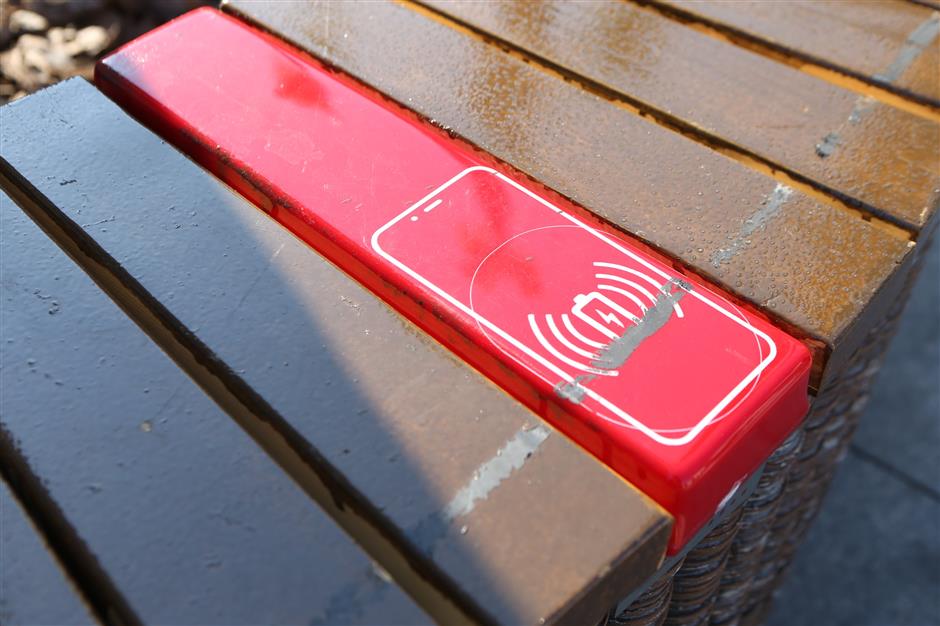 Wi-Fi is an added plus on some public seating in Jing'an District.

Zhou Hongtao, a professor with Tongji University, has suggested that public seating be designed with holes on the surface to shed rain water.

"These seats must be durable for at least five years without any maintenance," Zhou said.

Following his own criteria, he has designed seating for seniors in the Siping community, one of the city's oldest workers' areas, built between the 1950s and 80s.

City authorities are also trying to encourage shop owners to allow people to use their streetside seats, even if they aren't buying anything.

Meanwhile, companies and individuals are invited to donate seating and cover maintenance costs. Some notable names have heeded the call. 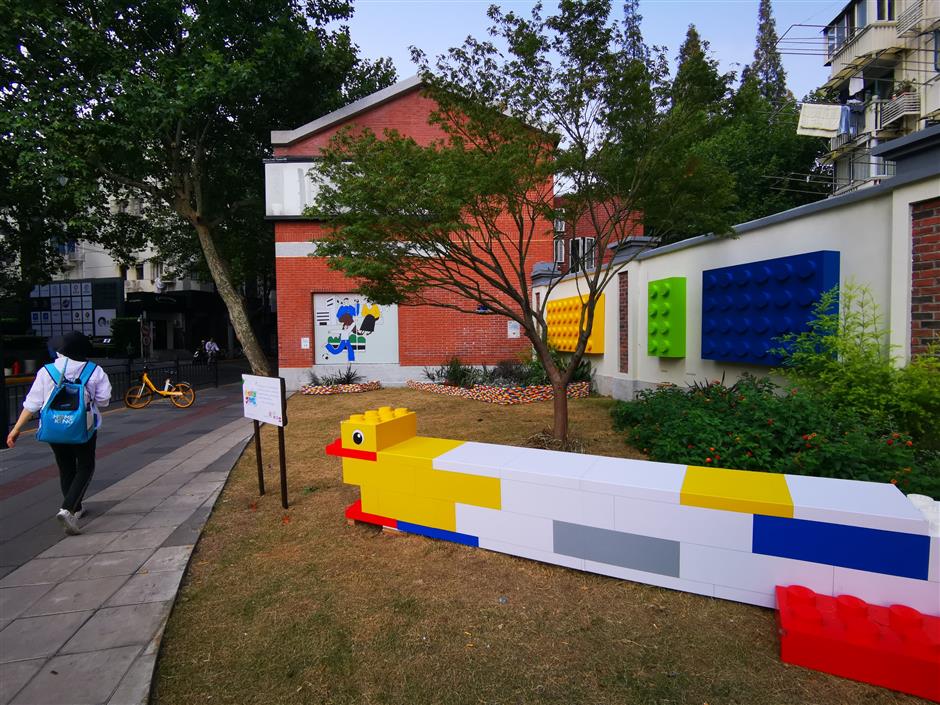 A Lego-style bench at a pocket garden on Yuyuan Road.

A dozen benches on Changde Road, donated by a technology company, won favor with local residents because they come equipped with wireless charging facilities.

A cake shop on Panyu Road installed several seats made of beer cases and cushions, creating an online sensation that brought in more customers.

The Shanghai Institute of Computing Technology collaborated with a neighboring cafe and restaurant to convert a row of shelving once used for take-out orders into public benches.

"I always see seniors enjoying the sunshine or chatting with friends on the seats outside the institute," said Li Feng, property manager of the institute. "I think it gives the city a sense of softness and warmth."

Citywide, some 600 seats have been so far donated by citizens and companies, while some 1,700 are being shared by street shops, according to the bureau.

Jiao Tong's Professor Fan has suggested that public seating be mobile, as is common in Paris.

"If the seats can be packed up easily and moved around, they can better adapt to the needs of the public," he said. 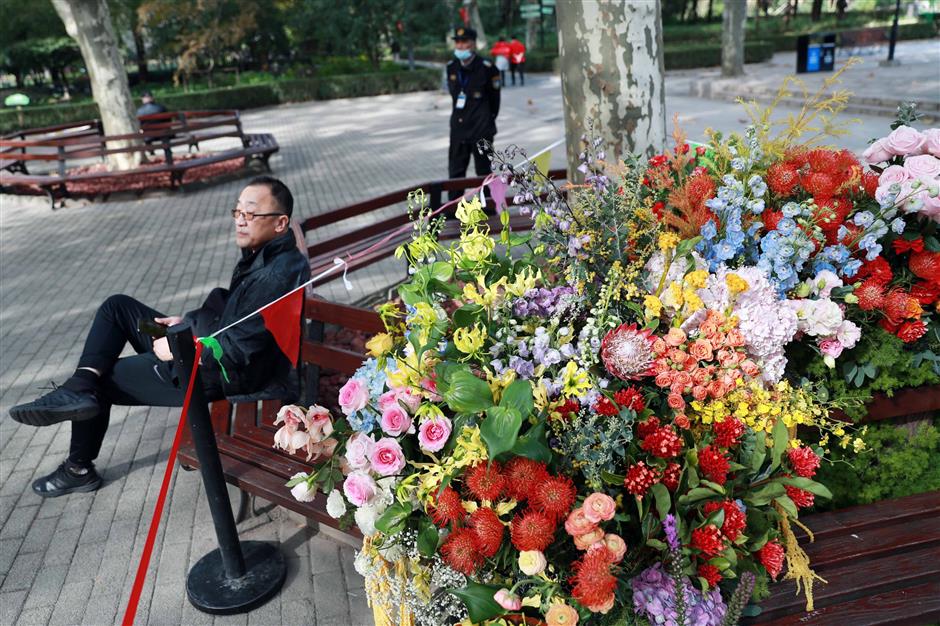 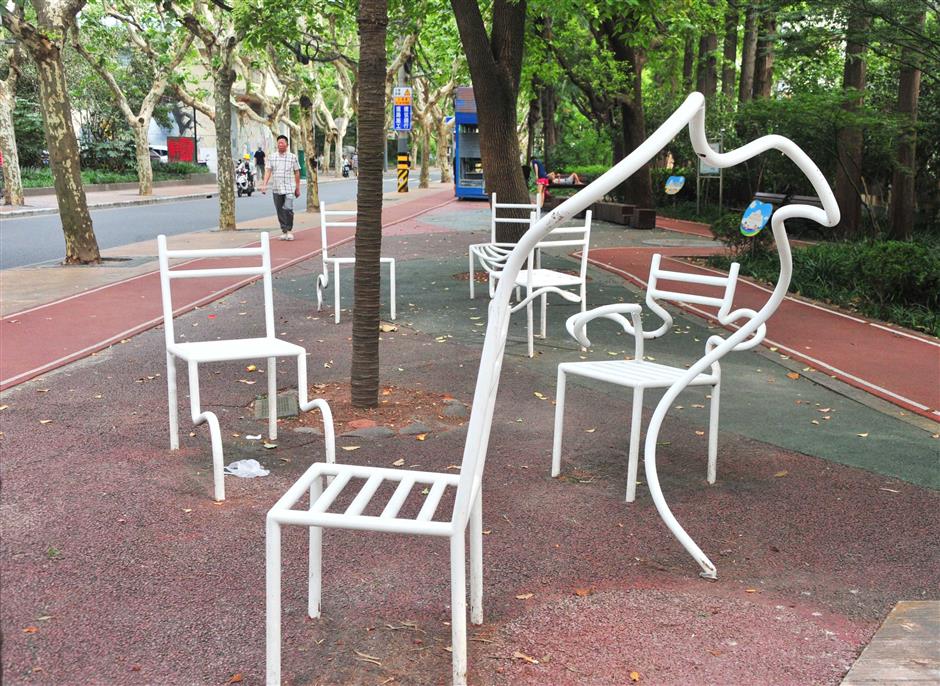