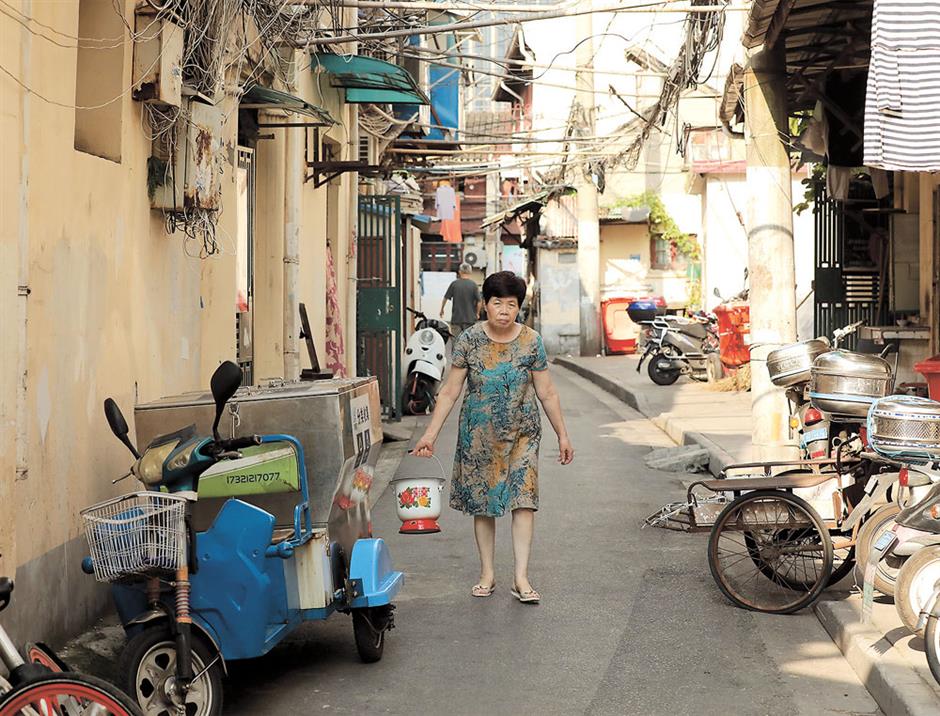 A resident carries a chamber pot yesterday at Xiaopilong, an alleyway near Yuyuan Garden in downtown Huangpu District. Many residents of this alleyway, which dates to the 1930s, still use chamber pots because there are no toilets in their aging and outdated homes. The crowded brick-and-wood residential building neighborhood, along with other shikumen neighborhoods near the iconic Yuyuan Garden, are slated for major renovations.

The state-owned company will work with districts to renovate old residential areas and improve the living condition of local citizens, while dedicating itself to better protecting the city’s historic structures, according to the agreement.

“Most of the old residential buildings will be preserved and residents will keep living in their communities,” Gao Yun, the Party secretary of Huangpu District, told the city’s television station after the signing ceremony.

With the help of the company, the revamping of old residential communities will be accelerated, said Hong Haiming, director of the construction committee in Jing’an District.

The city government aims to finish renovating 2.4 million square meters of downtown lane-style residential space by 2020. By June, over half of this target had been reached since the revamping campaign was launched in 2016.

Some 400,000 square meters of old residential building space will be renovated this year, according to the Shanghai Housing and Urban-Rural Construction and Management Commission.

Shanghai will protect about 90 percent of its remaining downtown lane-style residential buildings, and demolish the rest as they have “no protection value,” the commission said.

“The city has entered a new stage of urban revamping, so only some regional development will be carried out on the old residential neighborhoods,” said Guan Taoping, deputy president of the land company.

For historic residential buildings, the city will raise renovation standards to improve living conditions. Kitchens and bathrooms, for instance, will be provided for individual households.

In certain cases, some residents will be relocated so that remaining residents can enjoy better living conditions. In the process, it is hoped that historic structures can be better protected.

One such project is underway on a trial basis in a shikumen community in Huangpu District. The renovation of Chengxingli, which is known for hosting annual “alley games” competitions, represents a new attempt at protecting the city’s remaining stone-gated houses. If successful, the project is expected to be promoted as a model of preservation at other shikumen communities.

Huangpu has also launched a new round of renovations on the old-town area around the Shanghai Confucian Temple. Their aim is to retain the area’s historic flavor while improving living condition for residents.

The area along Zhonghua and Wenmiao roads in Huangpu is the core of Shanghai’s old town, dating back over 700 years.

About 2,000 illegal buildings, including those built by residents to expand their limited living space, have been demolished around the temple. Homes in the area will be renovated to include separate toilets, or improved shared facilities, by November.

Hongkou District has also launched a new program to update and protect its traditional lane-style neighborhoods.

The first batch of residents of the Chunyangli neighborhood, built around 1921 in Hongkou, have just moved back to their apartments following an eight-month renovation. Their housing units now have a brand-new look, along with private toilets and kitchens. Other changes include the replacement of aging brick and wood structures with steel beams and other fire resistant materials.

The city government has tested a number of strategies to renovate its old residential areas, mainly its unique shikumen neighborhoods.

In recent years, the city government has carried out a number of subtle, low-key renovations in several old communities. Their aim is to improve living standards while retaining the traditional layout and lifestyle of the lane neighborhoods.