A pair of palm-size twins, a boy and a girl, were transferred by helicopter from Huaian in neighboring Jiangsu Province to Shanghai Xinhua Hospital yesterday afternoon, the first newborns to benefit from the new Yangtze River Delta air rescue channel.

The twins were born prematurely to a 30-year-old mother on Wednesday at Huaian No.1 People’s Hospital. The girl weighs 750 grams, while the boy weighs 950 grams but suffered more serious anoxia as he was born later.

Both of them are in a critical condition and need special care that the hospital in Huaian could not provide.

As one of the 25 members of a medical alliance in the Yangtze River Delta region led by Xinhua Hospital, the Huaian hospital transferred the babies to Shanghai where there are more experienced doctors and better equipment. The Huaian facility joined the alliance only last year.

Although Xinhua Hospital has saved a lot of underweight newborns since it set up a rescue center in 2008, Huaian is more than 400 kilometers from Shanghai. The twins would have had to endure a 5-hour bumpy journey by road, so the two hospitals decided to make use of a rescue helicopter.

Xia Hongping, deputy director of the Xinhua neonatal department departed Shanghai at 8:20 Wednesday night and drove to Huaian to take care of the babies, helping them pass their first night safely.

“Both babies suffered anoxia and showed high infection indices in blood tests, so it was a matter of urgency that they be transferred to Shanghai,” said Xia.

Yesterday morning, another two doctors and two nurses left Shanghai for Huaian in a helicopter equipped with an incubator and respirators.

They landed in a primary school playground beside the hospital and left around 4 pm with the twins on board. They landed at Yangpu District Sports Center at 5:40 pm and were met by an ambulance. Fifteen minutes later, they were in Xinhua neonatal ICU.

Zhang Yongjun, director of the unit, confirmed that the babies showed stable life signs but still faced a some serious challenges.

“We will keep them under observation for at least three months,” said Zhang. 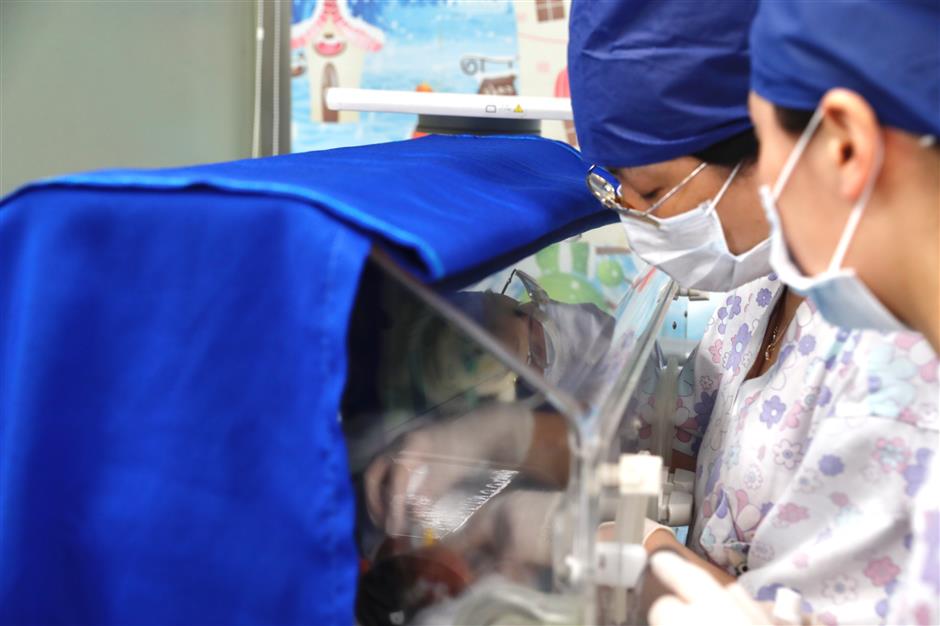