Volunteers in 132 Chinese cities spent the weekend picking up plastic and other waste, in a worldwide effort to clean up the planet.

To celebrate the 10th World Cleanup Day on September 15, 700 NGOs and other groups tackled China’s waste crisis, mobilizing more than 1 million people. It was the first time that China has participated in the event, which was launched in Estonia in 2008.

Across the world, the campaign attracted 13 million green advocates from 156 countries, according to Pick up China. In Shanghai, more than 4,000 locals joined in on Saturday.

They picked up trash in their neighborhoods, along the city streets and at popular venues.

About 80 volunteers traveled all the way to the remote Nanhuizui Guanhai Park, an emerging destination for weekend getaways in coastal Lingang, the Pudong New Area. There, they were dismayed to find so much garbage to pick up, mostly used tissues, empty bottles and plastic bags hidden in the bushes, according to the organizer.

The campaign raises awareness of environmental protection and promotes garage sorting. It was initiated by non-profit group Let’s do it! in Estonia in 2008 and soon took off around the world.

“Cleaning beaches and public areas sounds like something that has been done before. But our mission is not just about cleaning, but to actually stop this problem once and for all,” said Heidi Solba of Let’s Do It!

On Saturday, the action kicked off in the Pacific islands of Fiji and Vanuatu, and continued around the globe in a 24-hour marathon that ended in American Samoa, according to World Cleanup Day headquarters, which called the event “the largest peacetime civic action in human history.”

From snowcapped mountains to vast oceans, people united in taking action to remove waste from the environment to raise awareness of the severity of the crisis.

Indonesia and Pakistan topped the volunteer chart each with more than 3 million participants, while in Kyrgyzstan, volunteers accounted for 7 percent of the population.

“Today, I truly believe that, as humans, we do have more hope!” said Eva Truuverk, head of the managing board of the Let’s Do It! Foundation. 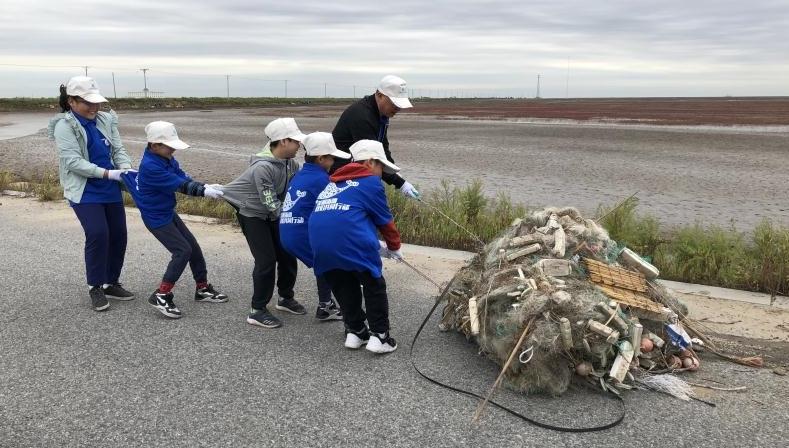 On the Tibetan Plateau, Tsering Chozom and her squad of volunteers swept vast amounts of waste off the highways that bring millions of tourists into the region every year. On a national scale, another million people have signed up for the “Beautiful Travel” program that calls for eco-conscious tourism.

Lin Peng, a young cyclist and travel aficionado, was alarmed at the damage that waste caused as he rode along Highway 318 from Sichuan to Lhasa, capital of Tibet Autonomous Region. The trip took him 92 days, collecting trash and hitchhiking to the nearest disposal facility.

“I collected more than 500 bags of trash, and that wasn’t even 1 percent of the waste I saw,” he said in an interview with Xinhua after a World Cleanup Day activity in his native Jiangxi Province.

Today, he embarks on another project, to clean up the shores of Poyang Lake, the largest freshwater lake in China, a 500-kilometer journey that will take months.

“My goal is to pick up trash scattered across the country, and through my own actions influence more travelers and ultimately society,” he said.

“If there was the will, every day could be and should be Cleanup Day,” said Ma Yongjian, a volunteer from Beijing who took part in “plogging” — jogging while picking up trash — with his friends in Yudong Park in the northwest of the city on Sunday.

Red Bull cans, Nongfu Spring plastic bottles, cigarette packets and Hi-Tiger bottles were the top four waste products in Lin Peng’s collection along the Sichuan-Tibet Highway. In Yudong Park, Ma Yongjian and his friends estimated that around 80 percent of the trash was cigarette butts, which, according to a recent study, are the most harmful and pervasive man-made contaminant of the oceans.

Thousands of single-use paper cups discarded along the Beijing Marathon route drew criticism from the public who dubbed the event a “trash throwing contest.”

“We must change the way we live to reduce waste from its source,” said Joe Harvey, a promoter of “zero waste” lifestyles in China.

He and his girlfriend Carrie Yu created “The Bulk House,” a brand that provides zero-waste solutions for daily living. In the store located in the center of Beijing, customers can find stainless steel straws to replace plastic ones, or bio-detergents that have no impact on the environment.

The couple are urging people to reduce or eliminate single-use plastics, such as utensils, bags and bottles.