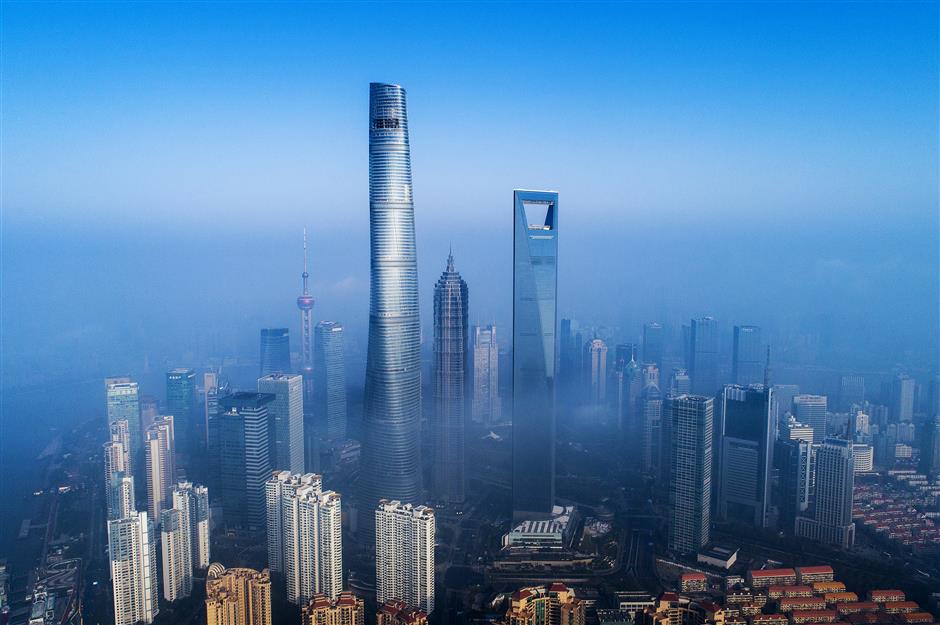 Skyline of the Lujiazui Financial District in Pudong in Shanghai, China, on February 6, 2019.

Shanghai issued its latest bulletin on the city’s ecological environment on Monday and its efforts in enforcing related laws.

The average density of PM2.5 particles, the main air pollutants, was 36 micrograms per cubic meter in 2018, a 7.7 percent drop from the year before. In around half of last year’s polluted days, ozone was recorded as the major pollutant.

Compared with the previous annual environment bulletin, which mainly covered air and water, noise and radiation, the latest report includes information about the quality of underground water and the sea.

According to the bulletin, the quality of both underground water and sea environment remained steady over the past year.

Underground water quality inspected at 10 out of 13 monitoring spots around the city met the national IV standard – mainly for agriculture and industry use. Water quality at one spot met the higher III standard, while the other two met the lowest V standard – not drinkable but acceptable for other uses.

Sea water quality inspected in the Yangtze River estuary was said to be good. But inspection results at other sea water monitoring spots showed that the index of inorganic nitrogen and labile phosphate failed to meet the standard.

The average densities of air pollutants PM2.5, PM10, SO2 and NO2 all reached new lows since air quality standards were introduced in 2013. But the indexes of PM2.5 and NO2 (42 micrograms per cubic meter) have yet to meet the national standard.

Shanghai has a target of bringing the average density of PM2.5 below the national standard of 35 micrograms per cubic meter by 2022. Heavily polluted days — with an Air Quality Index higher than 200 — should also disappear by 2020.

Ozone pollution is another problem the authority has been working on.

Shanghai reported 296 days (81.1 percent) of good or excellent air quality in 2018 with the Air Quality Index no higher than 100. For the other 69 polluted days, ozone was the major pollutant in about half of them.

Bureau director Shou Ziqi said the authority’s control of volatile organic compounds discharge has been one of the efforts to fight ozone pollution. Manufacturers will be required to improve their raw materials.

“The authorities have already taken as many anti-air pollution measures that we could think of over the past few years. So it will now be even more difficult if we want to achieve further improvements,” said Shou.

Shanghai’s water quality continued to improve last year. Among 259 water samples from around the city, 7 percent failed to meet the lowest national V standard. In 2017, the figure was 11 percent. The average density of ammonia nitrogen and phosphorus has yet to meet the standard.

According to the bulletin, Shanghai reported 3,047 environment-related cases in 2018. Almost 140 involved company or enterprises that were shut down and nine had been ordered to suspend operations.

A total of 530 million yuan (US$76.7 million) in fines has been collected. About 20.2 million yuan was collected from violators fined on a daily base for not taking proper action in time.