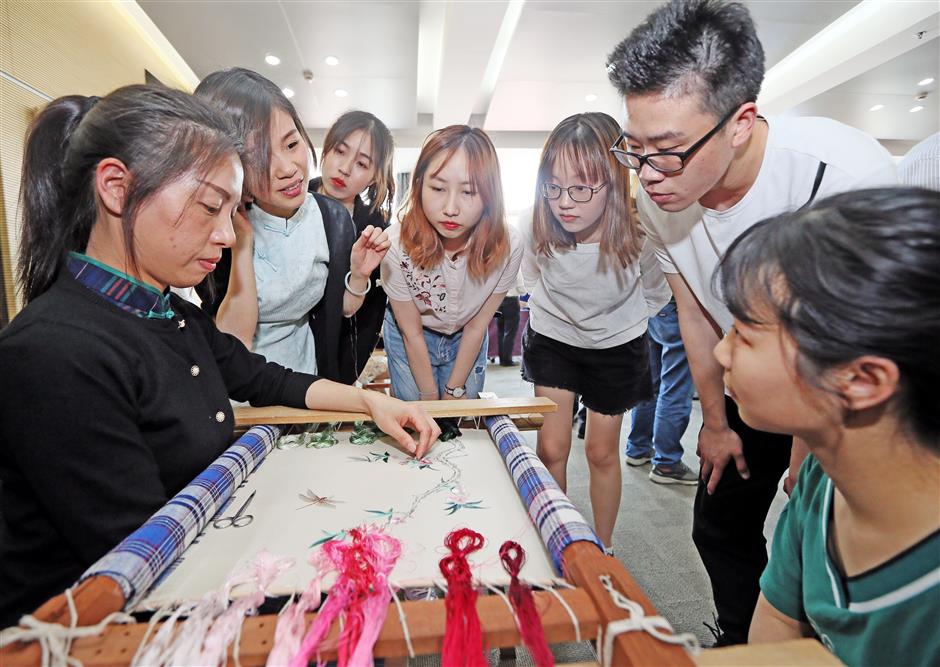 Seven Songjiang masters demonstrated their Gu embroidery skills at Shanghai Normal University recently during the launch of a traditional culture inheritance base at the university to train future teachers in the skill.

Gu embroidery, or guxiu, was established by the Gu family during the Ming Dynasty (1368-1644) more than 400 years ago. It was listed as a “National Folk Culture Protection Trial Project” by the Ministry of Culture in 2005 and among the first batch of national intangible cultural heritage projects in 2006.

Gu embroidery is also known as “painting embroidery” or “painting by needle and thread” as the works mainly feature landscapes, animals and people in elaborate settings and are as vivid as paintings.

An agreement signed between the Songjiang Bureau of Culture and Tourism and Shanghai Normal University will send Gu embroidery masters to teach at the university to train future teachers at primary or secondary schools. The two sides will carry out intangible culture inheritance research and social practice, and compile textbooks.

“We will hire successors of the craft as special professors and launch a course open to all students later this year to teach basic knowledge and skills of Gu embroidery,” said Zhang Hua, deputy director of the base. “We will also set up a students’ embroidery club, where the special professors will offer long-term hand-on-hand instructions on complicated embroidery skills to students who stand out from the public course. We will also visit local primary and secondary schools to help them carry out related education.”

Zhang said the university will use digital technologies to help promote the traditional craft and culture. It will produce a documentary about Gu embroidery while students are encouraged to work on their own videos or promotion plans.

Before the launch of the base, Songjiang had cooperated with schools such as Shanghai University of Engineering Science and Shanghai Institute of Visual Arts on Gu embroidery courses.