Foreign enterprises and traders in downtown Shanghai are to enjoy more convenient clearance and supervision procedures from Shanghai Customs.

Changning District signed cooperation deals with the customs on Thursday for innovative supervision patterns and year-round exhibition and trade for imported products.

The agreements were signed two months ahead of the second China International Import Expo to boost the effects of the expo and the economic development of Changning, one of the most prosperous downtown districts in regards to foreign trade.

Under the agreements, customs will support the development of the Linkong economic zone near Hongqiao International Airport for the aviation leasing industry.

They will explore innovative supervision on business jets bonded exhibitions, aircraft financing and lease as well as bonded maintenance.

The Linkong economic zone aims to become not only an international transport hub but also headquarters for airlines and aviation firms from around the world.

Dozens of the world's most advanced business jets are on display at the airport for the annual Asian Business Aviation Conference & Exhibition. In 2018, a total of 6,366 business jets took off and landed at the Hongqiao and Pudong airports.

The customs will also support Changning's development as a trade center for imported products with its influence covering the Yangtze River Delta region and the whole country.

A year-round trade and exhibition center for import products will be established in Changning. Based on the customs' big data platform in cross-border trade, a new intelligent and digitalized clearance procedure will initially be launched in the district, the customs said.

It will be more convenient for foreign traders to clear their imported products to display at the expo and following exhibitions. Some cultural products meeting requirements may even be exempted from submitting guarantees.

There are over 7,300 foreign companies and organizations based in Changning. Imports and exports amounted to 42 billion yuan (US$5.8 billion) between January and July this year, a 12 percent increase on the same period in 2018, said Wang Weiren, Changning's Party secretary. 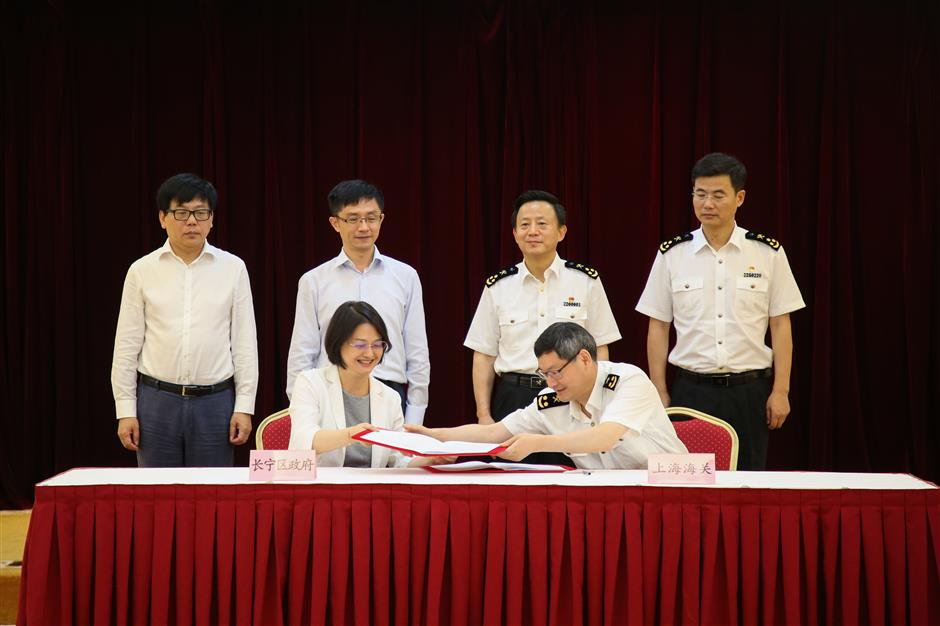 Officials with Changning District and Shanghai Customs sign a new round of cooperation agreements on Thursday.

The district started cooperation with Shanghai customs in 2012 to offer optimized supervision patterns and better services to overseas enterprises.

In a latest scheme, the Shanghai Entry-Exit Inspection and Quarantine Bureau will clear imported dairy and textiles at five companies with a good reputation in Changning by supervising their manufacturing and transport processes, or examining sample batches.

Thanks to the scheme, local consumers are able to drink fresh milk from New Zealand, for example, within three days of production, compared to at least eight days under normal inspection procedures.

The most reliable trade companies can receive simplified inspection processes, while those with frequent disputes with customers or imports from regions with disease epidemics will undergo stricter inspections to cover every product.

The district has also launched an "air inspection" scheme where reputable trading companies can send sample products by air for quarantine inspection. If the sample passes checks, the quarantine watchdog will clear the entire batch of products to be transported by sea.

Reputable multinational enterprises such as Unilever, Chrysler, The Land Milk, New Balance and New Union Textra Import and Export Co have benefited from the schemes.

These services have helped Changning attract 115 foreign invested projects and US$772 million in contractual foreign investments between January and July his year, a 78 percent increase on year, according to the district government.

The district's commerce commission will visit all the foreign companies with registered foreign capital of over US$5 million to determine their needs and offer services in time.

The commission has helped GrandVision, a global leader in optical retail, with its application to have a regional headquarters, support funds as well as intellectual property rights and trademark protections, said Li Huiying, the company's financial director.