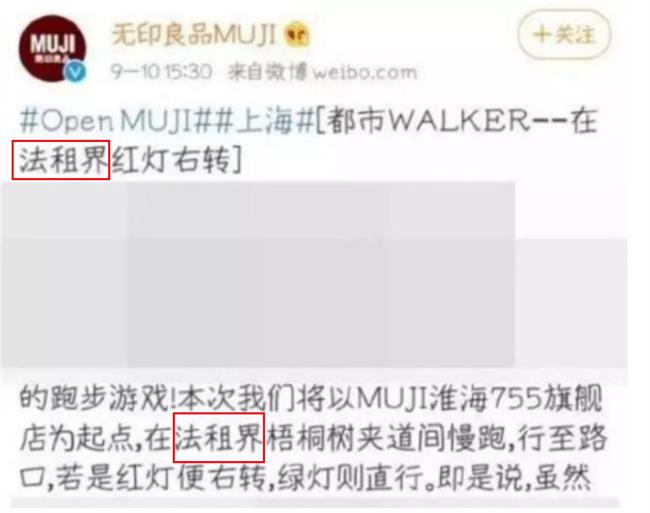 Muji (Shanghai) has apologized after the Japanese retail company came under fire for using the term "French concession" on one of its social media accounts.

The company publicized a jogging event known as "Open Muji Shanghai, Urban Walker" on its official Weibo account on Tuesday, saying the running event will take place amid plane trees of the "French concession."

The term triggered outrage among Chinese Netizens, and the company deleted the information about 30 minutes later and said the activity would be cancelled.

Muji (Shanghai) said flaws in training and content review led to the incident and it realized the seriousness of the mistake in a statement released on Thursday.

It said it respects China's culture and history and will enhance training and review to avoid similar mistakes in the statement released on Weibo.

Muji imported 119 indoor steel laundry-drying racks with packages printed “MADE IN TAIWAN, country of origin: Taiwan (the latter part in Chinese)" from Japan. It sold them on its Taobao flagship store and outlets.

Early last year, the Japanese retail franchise was found to have used an incomplete and inaccurate map of China in a product catalog.

The map Muji used in its 2017 autumn and winter furniture catalog incorrectly marks the nation’s boundaries, and several Chinese islands are missing on the map, according to the National Administration of Surveying, Mapping and Geoinformation of China. These include the Diaoyu Islands, Chiwei Islet and the South China Sea Islands.

In addition, the map uses different colors for Hainan Island and the Chinese mainland, and incorrectly marks Taiwan Island, according to the administration.