No English as company shuts its doors 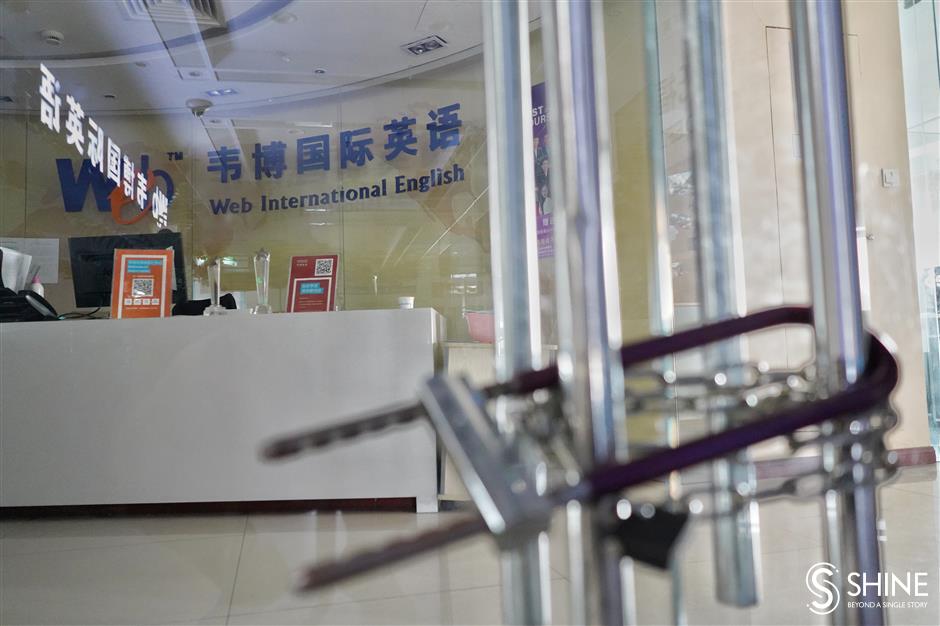 The doors are locked shut at a Web International English branch in Xujiahui.

Language training company Web International English said on Sunday that its has established a team to handle its students in Shanghai after its branches closed up recently.

According to its announcement, it has reached an agreement with another training company EF Education First and local adult students of its offline courses now can register their information by scanning QR codes. Web's staff will contact with registered students later for settlement.

Adults students can go to any of five designated sites between October 21 and 31 with their identity cards, contracts and receipts to sign documents for transferring to EF. With the new documents, they can register at EF from November 1.

The announcement also said some other training company are willing to take over its students under 18 and those of online courses and courses for overseas study, while details for transference is under discussion and will be disclosed later.

The language training company has stopped trading, leaving thousands of learners in lurch, while employees say they are owed unpaid wages.

Gao Weiyu, founder and CEO of the company, said on Saturday in a letter to staff that it had financial difficulties.

In the letter,which Gao said had been written in the early hours of Saturday, he apologized, saying the company's operational difficulties were due to a continuous decline in performance and rising costs since last year. It had tried every effort, including strategy transformation, structure adjustment, additional investment by shareholders and borrowing, to solve the problems, he wrote. The company had also worked out a finance plan but that was repeatedly postponed due to the decline in business and negative public opinion.

“Web had never owed salary to any employee in the past 20 years since its establishment until August this year,” he wrote. “We had hoped the success in financing can pay the salary owed to you, but we cannot fulfill the promise due to the continuous delay in financing.”

He said he had been talking with government departments since October 8 and other language training companies.

“EF Education First has agreed to take over some of our adult and teenager students while we are still talking with Only Education, Longre and EIC Education, which all expressed willingness to take over some young students and some of the courses for overseas study,” he wrote, adding that the companies would like to arrange interviews to hire its Chinese and foreign teachers.

Gao said Web will provide certificates of pay owed to employees and pay it when it was able to do so. It has also invited a third-party company to help employees finish resignation and social security transference procedures.

He also said that Happy Goal, a company under Web focusing on students aged under 12, had also been affected. A new investor had offered to buy it but with limited funds. 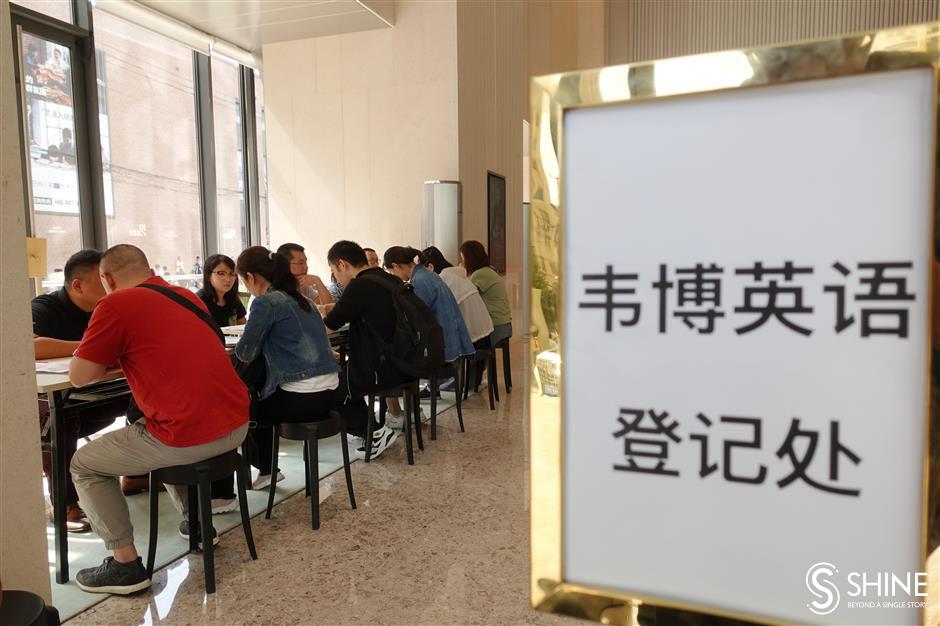 Students and parents write down their contact details on the first floor of the Nanyang1931 Building in Xuhui District, site of Web International English's headquarters.

On Web's website, the company says it has been operating since 1998 and has 154 branches in 62 cities in China, including about 20 in Shanghai.

According to its profile on tianyancha.com, an enterprise credit record website, Gao had 95 companies with 124 risk warnings related to them, including disputes over infringement of consumer rights.

Apart from Shanghai, there were media reports that Web branches in Beijing, Shenzhen, Hangzhou, Nanjing and Chengdu had also closed.

Students found staff at its Shanghai branches had disappeared after the National Day holiday.

At a branch in Xujiahui, the doors were closed and some people were on the first floor taking down details of students and parents asking for refunds.

At a branch in the Joy-City mall in Jing’an District on Thursday, doors were open but all the classrooms and offices were empty. There was no one at the reception desk but only a note telling consumers to write down their contact information, call the 12315 hotline or go to Web's headquarters, the district education bureau or market watchdog to submit complaints and safeguard their rights.

“I have been learning at this branch for more than a year and paid for more than 50,000 yuan (US$7,000) recently for a new course preparing for the IELTS test (International English Language Testing System),” said a student surnamed Lu. “It had about 50 classes, but I have taken only 15. I took one class on Tuesday but was told by my teacher the next day that no more classes would be available because he had resigned as the company had failed to pay him. I’m still surprised as I was satisfied with the teachers and services here and have never found any abnormality before.”

Lu waited around for at least an hour but eventually left in disappointment.

Shanghai Daily found a woman who said she was customer service staff in one room. She said she had also resigned but was there voluntarily to help take down students’ details.

“It’s my last day here and some of my former colleagues will come here tomorrow,” she said. “Students who want to leave their information have to come quickly because there will be no one here after tomorrow.”

On Thursday, students and parents had gone to the company's headquarters in the Nanyang 1931 Building on Yude Road in Xuhui District to ask for refunds, but only found staff who refused to identify themselves taking down their information on the ground floor of the building and telling them to go home and wait for notification.

A woman surnamed Shen said she had paid more than 60,000 yuan at a branch in Minhang District for her son in July for courses that would last about a year to prepare for his overseas study application. She said the closure had happened without warning.

“There would have been classes during the National Day holiday, but the company told us that they were canceled to ensure students and teachers had a holiday and it would resume on Tuesday,” said Shen. “But my son's teacher told us on WeChat on Tuesday that he had resigned as the company owed him salary. He suggested we take legal action to defend our rights.”

A woman surnamed Zhang said she had taken out a loan for more than 28,000 yuan for an adult course but the company had closed before she could take any classes. Others said they had also taken out loans and still had to pay them back although their classes had stopped.

They had visited the company's 10th floor offices at its headquarters on Wednesday but found no one could help them as the employees there were also victims, who said the company had owned them three months' salary.

Staff on the ground floor who took their details “refused to answer any questions and we don’t know what will happen next,” said Shen.

Shen said she saw in a WeChat group for Web students and parents a list of more than 1,000 victims asking for refunds of more than 10 million yuan in class fees.

“I saw one parent had paid more than 100,000 yuan for two children and someone even just paid during the National Day holiday,” she said. 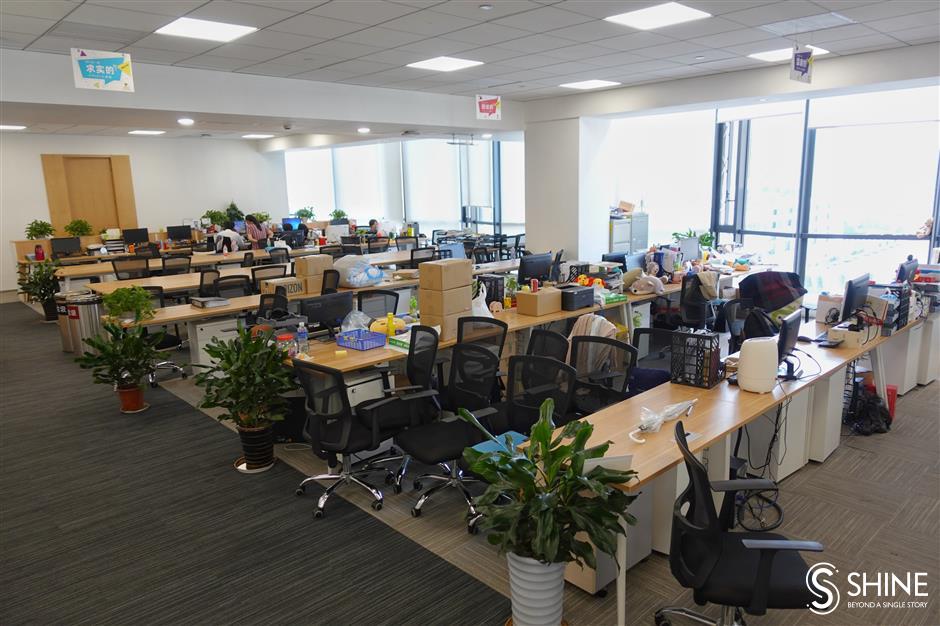 Almost deserted, Web International English's headquarters on the 10th floor of the Nanyang 1931 Building on Yude Road in Xuhui District.

When Shanghai Daily visited the company's headquarters there were only around 20 staff. One said there used to be more than 200 working there.

“We realized there was something wrong at the end of August as some colleagues found that the company didn't pay our social security premiums and the company didn't pay us our full wage,” he said. “Some employees began to leave from then and I stayed because I haven’t found another job yet and the company also promised to pay the rest later. But on Tuesday when we returned after the National Day holiday, I saw most colleagues had left and all the senior executives could no longer be contacted.

“There’s no work to do now, but we cannot just leave because even the human resources staff had resigned and no one can help us terminate the labor contracts and finish resignation procedures,” said the man, who didn't want to be named. “We are all worried because it would also affect our payment of social security and signing of labor contracts with new employers.” 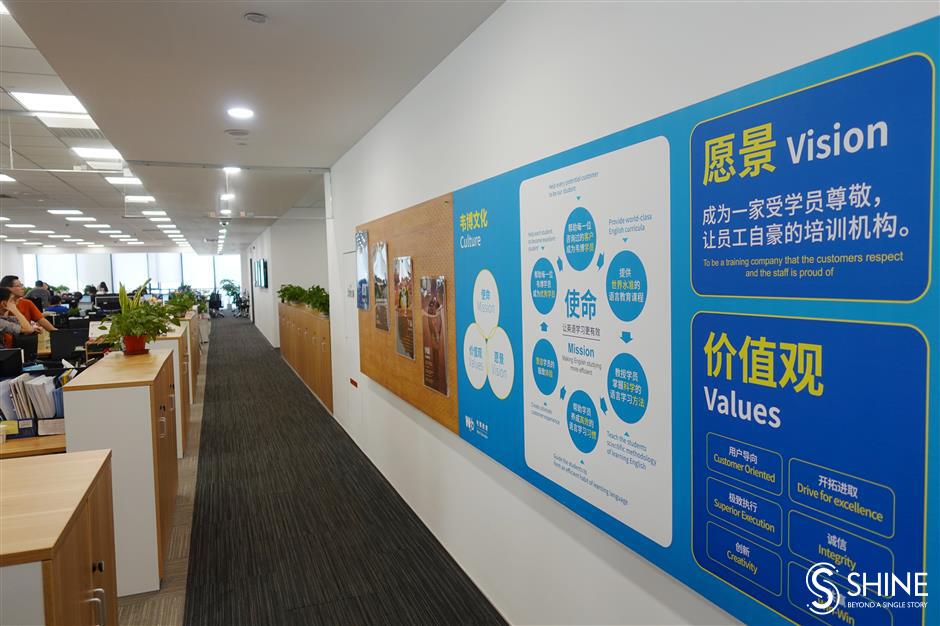 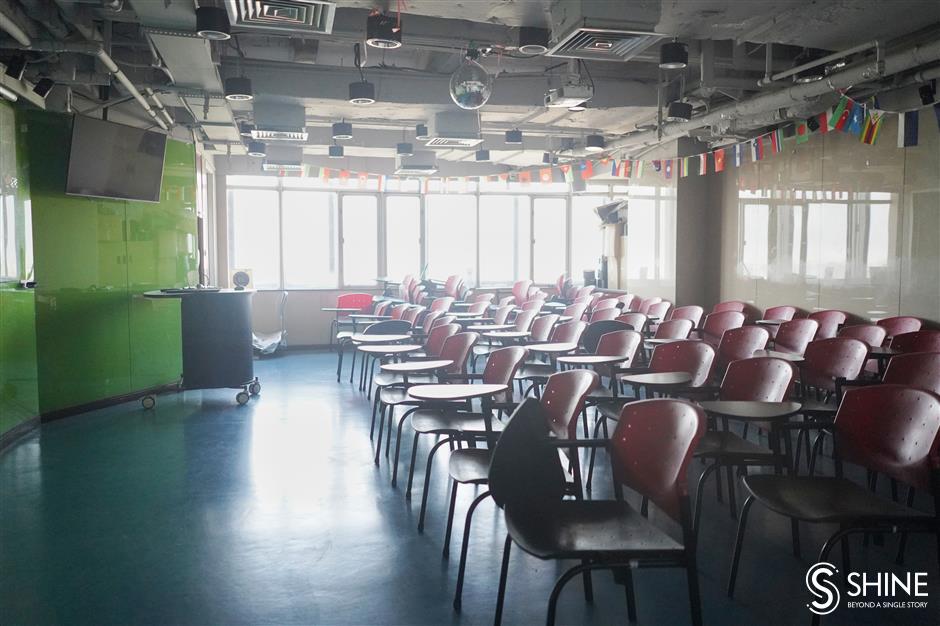 An empty classroom at a Web International English branch in Xujiahui District.