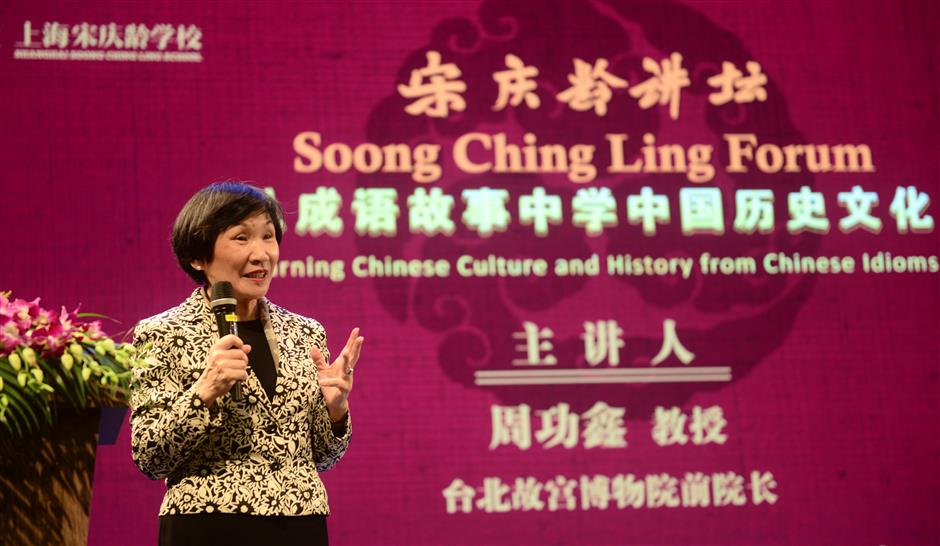 How to learn Chinese culture and history from Chinese idioms? Chou Kung-shin, former president of the Taipei Palace Museum, recently shared her ideas with 1,300 students and teachers at Shanghai Soong Ching Ling School.

She said at the school's Soong Ching Ling Forum that idioms are like a magic key that can open the door to Chinese culture. The forum invites scientists, cultural celebrities and industrial leaders to campus to enable students to appreciate their innovative spirit, humanistic thoughts and sense of mission.

She told the story of the idiom “wan bi gui zhao,” which means returning jade intact to the State of Zhao, and elaborated on the tradition of clothing, dining, living and transportation in the Warring States Period (475-221 BC).

Such stories and illustration are collected in her book "Illustration on Chinese Cultural Stories."

Chou has worked in museums for more than 40 years and is familiar with historical and cultural relics. She reminded students not to neglect the pictures in the book.

“All the details in the pictures were drawn based on careful research,” she said. “For example, the prototype of the beans in a picture of the story is the pattern on a bronze vessel exhibited in Shanghai Museum.”

Chou began working at the Taipei Palace Museum in her 20s and was its president from May 2008 to July 2012. During her term, the museum had become increasingly attractive to young people with popular creative products and activities.

Under her leadership, the museum began to design activities according to the age of visitors and launched camps for children to experience culture and show off their creativity.

She said there should be some activities to plant Chinese culture into the hearts of children.

“The cultural relics seem distant to children when they are exhibited in museums,” she said. “We have to make the museums alive to let the culture go into children’s hearts, turning their curiosity into a drive for active exploration and spontaneous leaning.”

Thanks to her efforts, segments of famous painting “Dwelling in the Fuchun Mountains” by Huang Gongwang (1268-1354), a highly-acclaimed painter of the Yuan Dynasty (1271-1368), in the palace museums in Beijing and Taipei were put together for the first time in June 2016 after being separated more than 360 years ago. The exhibition attracted more than 500,000 visitors in two months. She also started exchanges between the two museums.