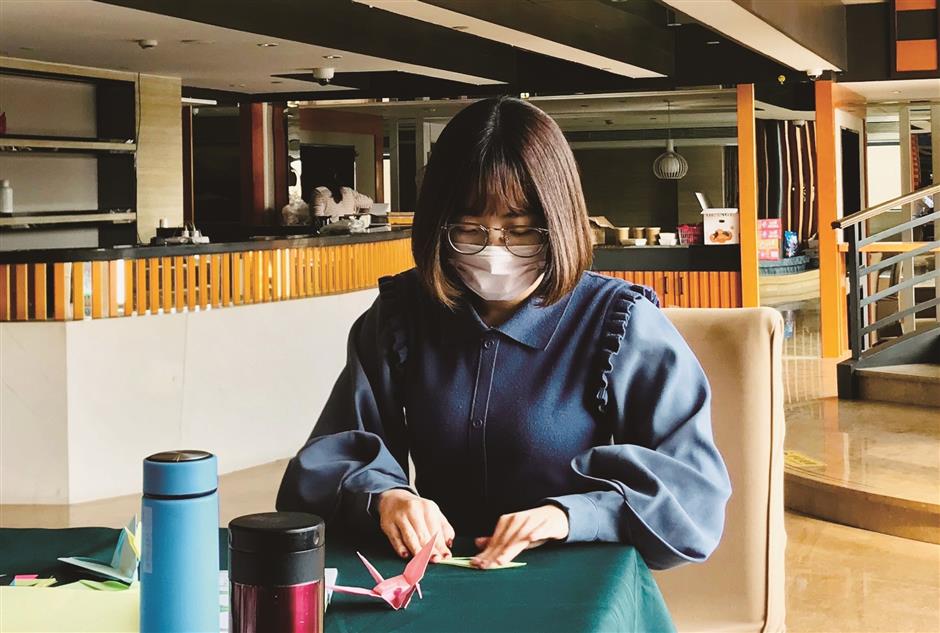 Sheng Caorui, who works as a volunteer at communities in Jiading, folds paper cranes, which stand for peace, love, hope and healing during challenging times, at an isolation spot and writes down wishes for those who are still in quarantine.

More than 8,000 young volunteers from Jiading District have spent over 53,000 hours in the fight against the novel coronavirus outbreak. They sacrificed their spare time to protect communities.

With more international companies setting up bases in the district, an increasing number of expats are choosing it as a place to live. As a result, communities faced the challenge of how to communicate with them in languages other than Chinese.

To deal with the problem, a team of volunteers who can speak foreign languages was set up.

Sheng Caorui, a graduate from the College of Foreign Languages at Nanjing University of Aeronautics and Astronautics, is fluent in English and has attended several international conferences as a translator.

She had no hesitation in responding to the call to help the district’s foreign residents. Her task was to communicate with expats staying at isolation spots, usually designated hotels, in the district.

“Good morning! Your breakfast is put in front of the door. Please remember to take it, and if you have any requests, please tell me,” said Sheng, offering her services in English to a Russian resident at an isolation spot.

This has been Sheng’s morning routine since her first day as a volunteer on March 7.

One of her first calls was to a German resident who doubted the need for quarantine at a designated hotel. He also complained that he couldn’t smoke or turn on the air-conditioner in his room, and that there was no housekeeper to clean for him.

The staff didn’t understand English so they asked Sheng whether she could deal with the problem. She had finished her shift and was at home having dinner when she got the call.

After arriving at the hotel, she talked to the resident patiently and answered all of his questions.

Problem solved, she went home at 10pm to get some rest before returning at 8am the next day for more translation work.

“It is the busiest time to help expats check in at the hotel. Apart from explaining the policies to them, we needed to be aware of any allergies and dietary restrictions they might have. Some of them were from non-English speaking countries, so it was hard to understand what they were saying because of their accents. But patience, the most important criteria for a volunteer, helped us solve all the difficulties,” Sheng said.

“Except for the carefulness, showing a warm heart is another important factor to be a volunteer,” said Sheng.

On one occasion, another German resident experienced an enormous mood swing at the isolation spot. After getting to understand the situation, Sheng sent a jigsaw puzzle as a gift to shift his attention and relieve his pressure.

Motivated by Sheng, a care team was established, and all the workers at the isolation spot joined the team. They folded paper cranes, which stand for peace, love, hope and healing during challenging times, and wrote down the wishes to those who were in quarantine.

Almost everyone would express their gratitude to Sheng when their quarantine days were over, including an Iranian girl who wrote a letter to the team in appreciation, for what they had done during the hard time.

Sheng translated the letter into Chinese and read it to other volunteers — “I love China. I am a member of Chinese as well.” All present were moved by the girl’s words.

“The expats quarantined here understand and respect us. Their compliments make me feel more inspired and drive me to improve my work as a volunteer,” Sheng said.

Working as a volunteer was not an easy job as she needed to balance it and her normal job. She took her laptop when she went to the hotel and, when time permitted, managed to deal with her own work.

Sheng had been concerned about her parents who live in Taicang in neighboring Jiangsu Province. Since she started her voluntary work when a mass of people returned to the city, she hadn’t been back home even though it was only a 40-minute drive from Jiading to Taicang.

“I do miss them, and they miss me too. They were also worried that I might get infected. However, they feel relieved after seeing my growth during the period,” Sheng said.

“Only when you undergo and witness it will you know how difficult it is for medical workers at the front line,” she said.

Sheng has now organized an online reading salon through which she also shares her experiences of being a volunteer during the COVID-19 outbreak.